On the Rail: Cute Minis For a Cause

How do you stop busy city commuters in their tracks? Lead three adorable dwarf miniature horses onto the sidewalk. Braveheart, Clover, and Sugar have been getting a lot of attention at the Washington International Horse Show. They are at WIHS representing The Peeps Foundation, a 501c3 organization dedicated to helping any miniature horse in need, and they are inspiring squeals of delight and plenty of petting from everyone who encounters them.

Braveheart and Sugar will go home to The Peeps Foundation’s farm in Lexington, KY, but Clover is up for adoption through the WIHS Silent Auction, with proceeds from his listing going to grand prix show jumper Kevin Babington, who incurred a spinal injury in a fall in August. 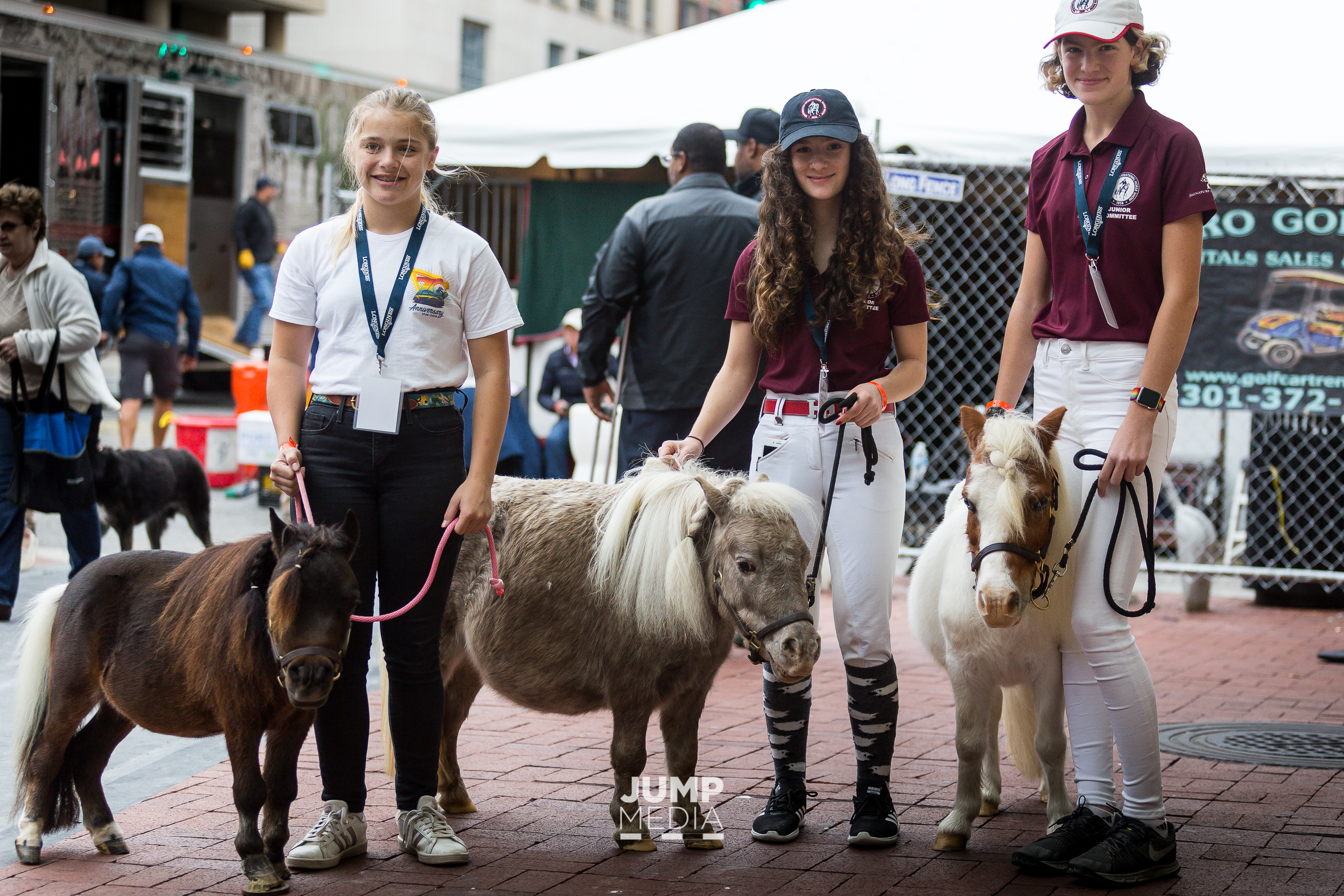 “I’ve been trying to think of a way to help Kevin,” said Josh Dolan, who, along with Alex Granato, founded The Peeps Foundation. “We donate a mini every year to the silent auction for Danny and Ron’s Rescue, and it raises thousands for them. It’s a fun thing, so Washington’s silent auction was the perfect fit.”

The Peeps Foundation started in 2014 when Granato and Dolan spotted a herd of minis in poor condition near their Kentucky farm. They rescued 35 minis from that farm, including the first mini to draw their attention, a little chestnut mare. They named that mare Peeps, and she’s become the official mascot of the foundation, making appearances at horse shows around the country to spread the word about The Peeps Foundation.

Dolan and Granato rescued Clover from an auction in Tennessee. “There were more than 100 minis there, but it’s hard for us to do more than 10 at a time for quarantine reasons,” Dolan said. “We usually get five that are the most adoptable and the five that need the most help. He was one of the ones that really needed help. He’s tiny, but he was really underweight. He got gelded and we’ve been working with him; he’s going to make someone a super special little guy.” 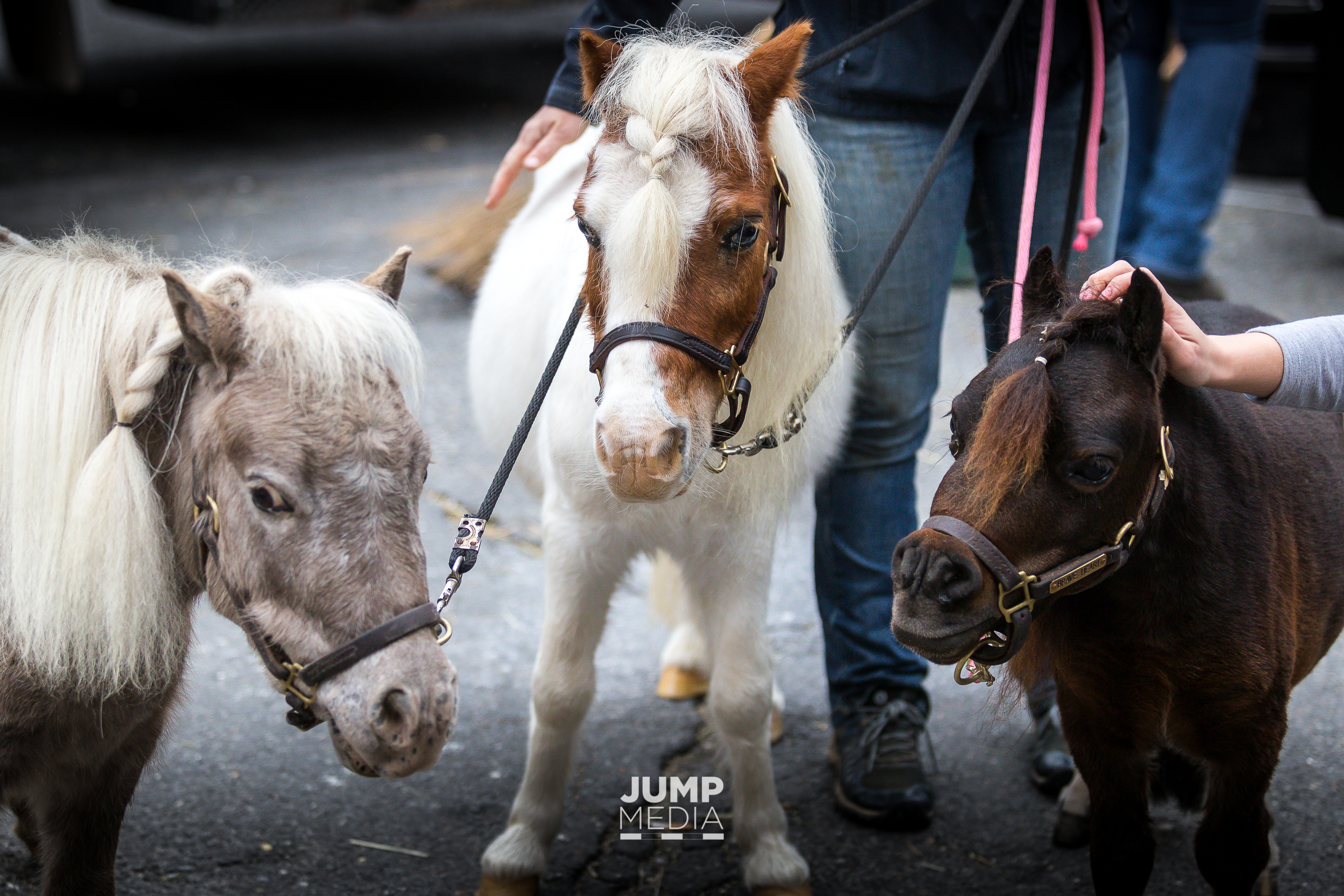 Between 50 and 60 minis live at The Peeps Foundation farm at any time, so Dolan and Granato don’t have much time to establish close bonds with all the minis. “Usually when they leave us and get a lot of one-on-one attention, they really blossom,” Dolan said. “I’m not sure of Clover’s story before we got him, but he’s a cool guy. I think once someone takes him home and pays attention to him, he’s going to be obsessed with them.”

Joining Clover at WIHS is Braveheart, a mini with a very special story. Dolan identifies the little back gelding as the equine in the worst condition when he arrived at their farm a year ago. Clover had been living in the basement of a house in Chicago when his then-owner reached out to The Peeps Foundation for help. “I realized later that she was contemplating sending him to us. I tried to convince her, but that didn’t happen,” Dolan recalled.

“She called me one day and said, ‘If you want him, I think he’s dying.’ Our barn manager’s family lives in Chicago, so they went and picked him up,” Dolan said. Brave Heart had to spend a few days in a veterinary hospital in Chicago before traveling to Kentucky. “I told them, ‘Just give him 24 hours.’ He made it through that, then 24 hours more, and in four days he was passing manure. When he got off the trailer here, he still couldn’t walk. But the way he looked at us broke our hearts. He’d been trying to stay alive for this long, the least we could do was help him. And now he’s great.”

Braveheart wasn’t just emaciated; his feet were also in horrific condition. He had maggots growing in his hooves, and he hadn’t had been trimmed or shod in months. “His shoe on the left front had been left on for seven months, so his hoof had grown up and fractured his cannon bone,” Dolan recalled. “He’s a very special one for us because he was for sure in the worst condition when he came. No one thought he’d make it, but he did.”

Braveheart, Clover, and Sugar are just three of approximately 500 miniature horses that Dolan and Granato have rescued. They’ve rehabbed and rehomed about 450 of them, while those needing more specialized long-term care stay at The Peeps Foundation at what they call The Sanctuary. 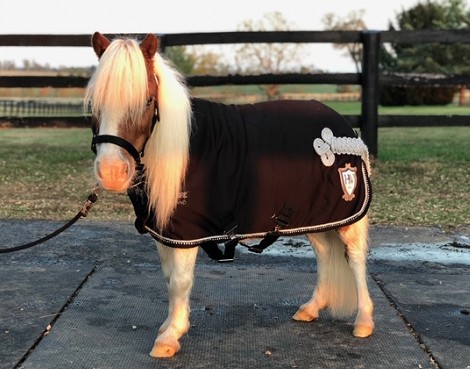 Dolan has become adept at corrective trimming and shoeing for the minis that come into the rescue, since dwarf minis are prone to hoof problems and limb deformities. The rescue works with farrier Curtis Burns, who invented Polyflex Horseshoes, a glue-on polyurethane shoe. With Burns, they developed an extension shoe that helps stabilize and straighten the minis’ hooves and legs. The shoes were a big part of Braveheart’s recovery.

Granato, who helped the U.S. team earn bronze at the 2019 Pan American Games in Lima, Peru, is competing in the International Open Jumper division at WIHS. He and Dolan hope that Clover’s auction will help raise money for Babington as he recovers, and that the minis’ appearances at WIHS will help raise awareness for The Peeps Foundation.

To find out more about The Peeps Foundation, visit them at peepsfoundation.org. Access and bid on the WIHS Silent Auction at https://e.givesmart.com/events/dNp/, and Clover is Item #1200!