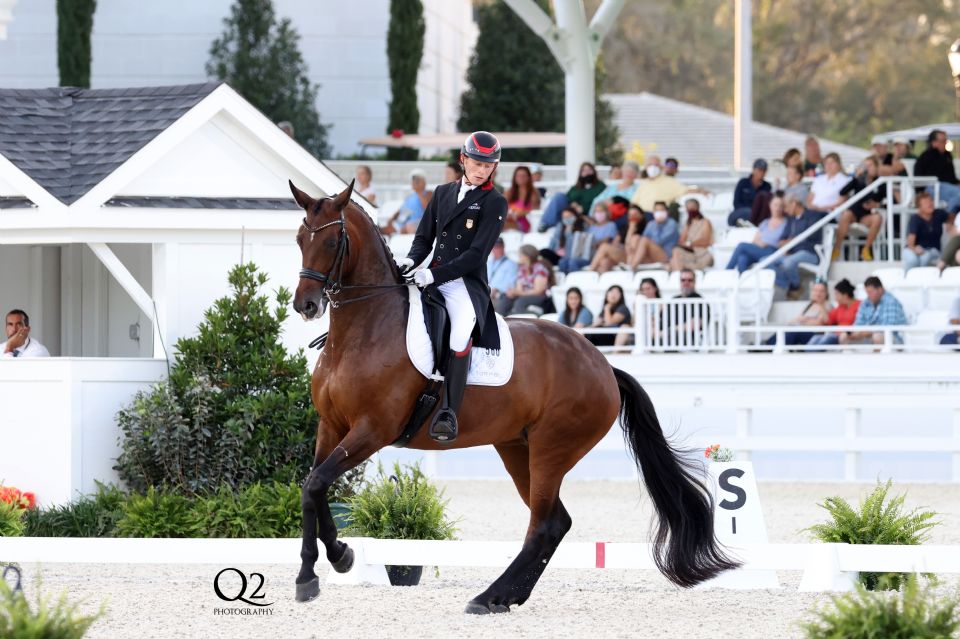 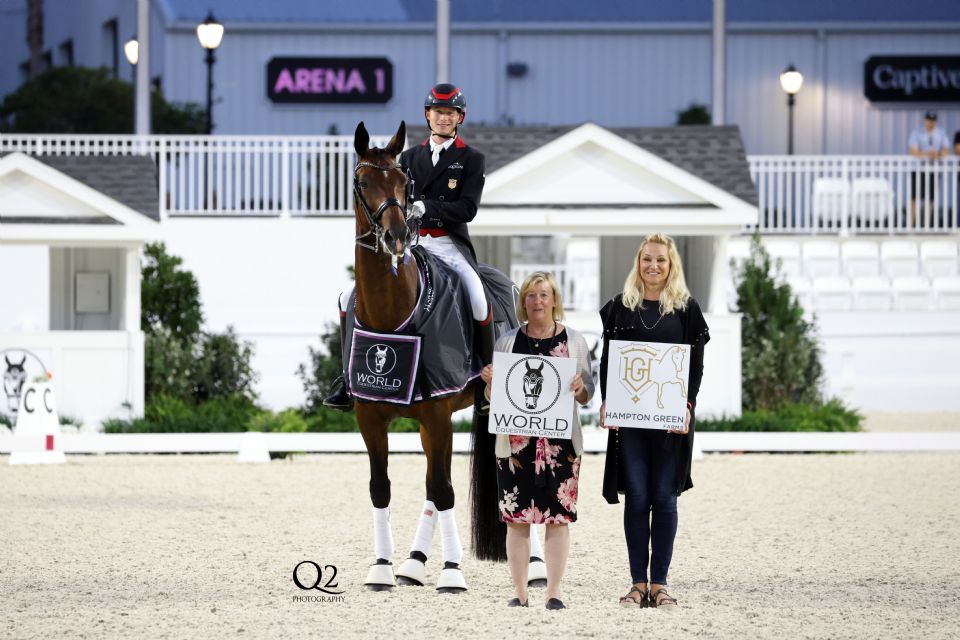 Ben Ebeling and Indeed in their winning presentation with judge at C Sarah Geikie and Kim Van Kampen of Hampton Green Farm.
Photo by Q2 Photography 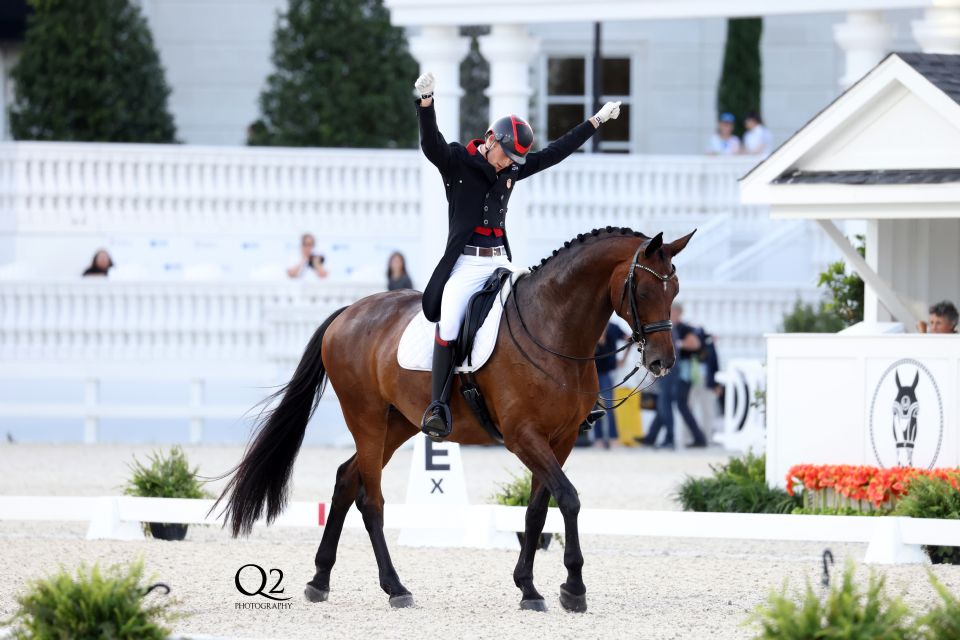 Ben Ebeling celebrates at the end of his freestyle on Indeed.
Photo by Q2 Photography 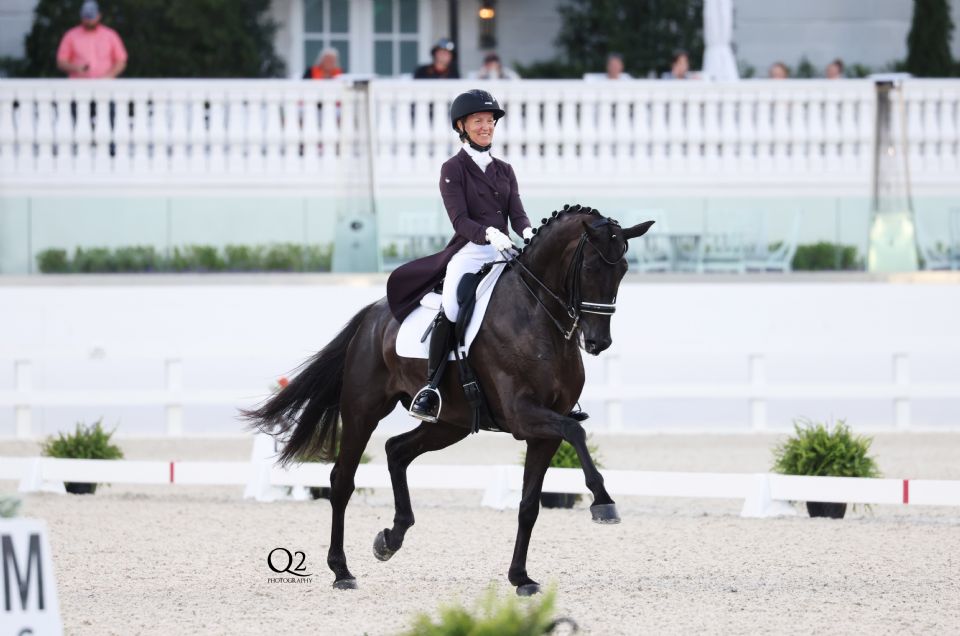 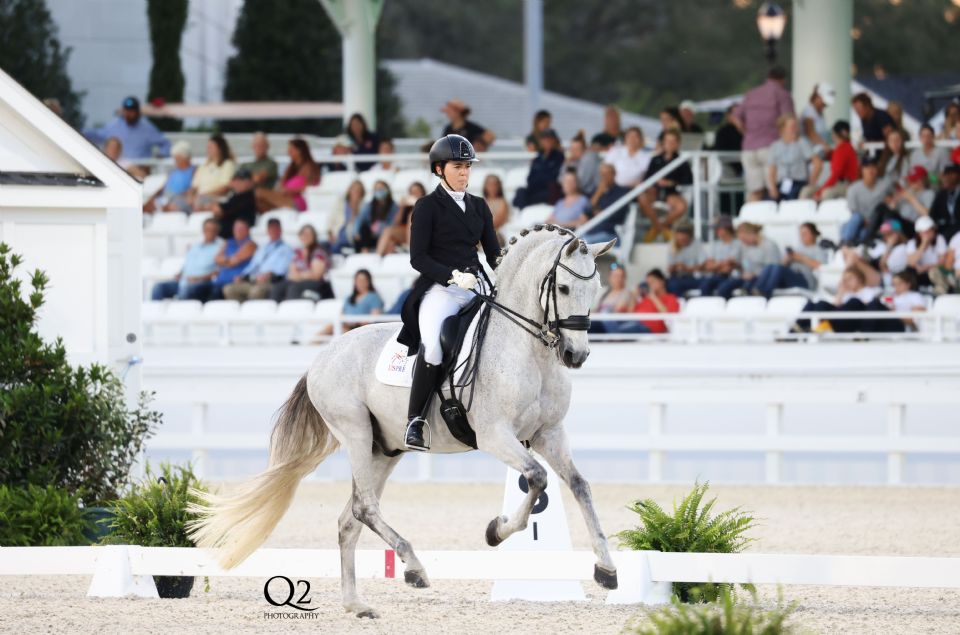 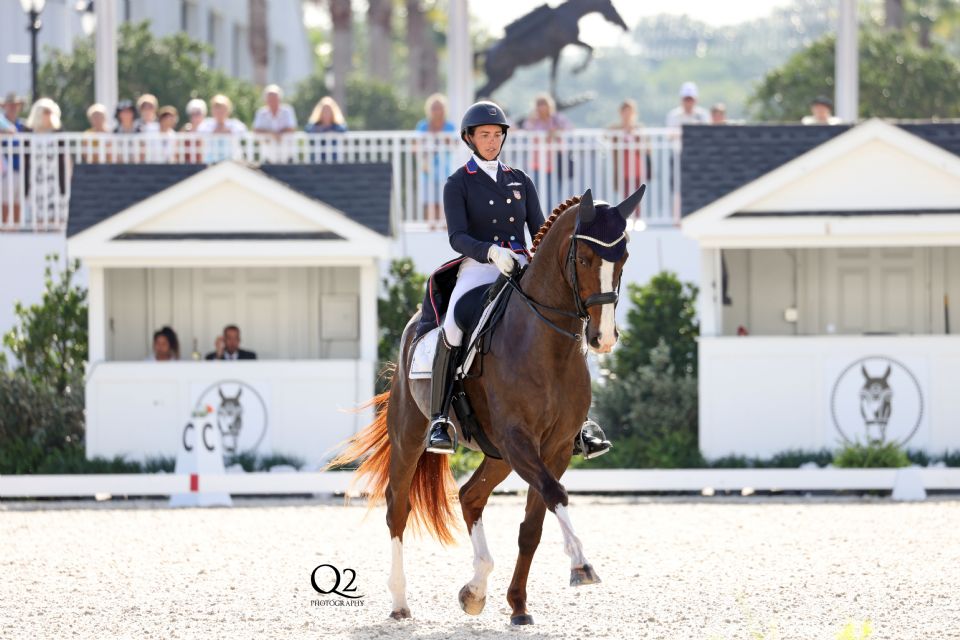 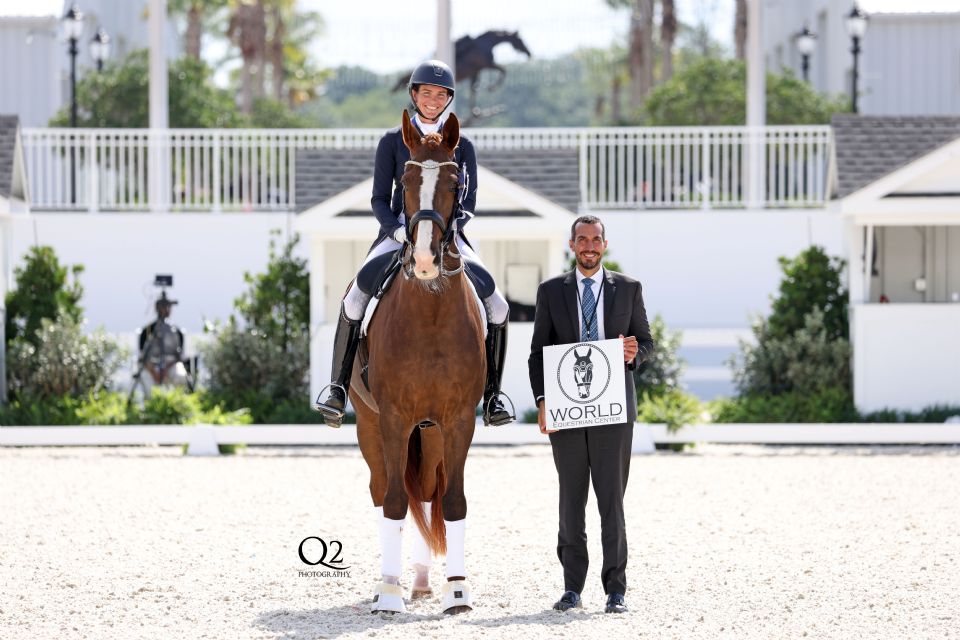 Anna Marek and Duvel in their winning presentation with judge at C Omar Zayrik.
Photo by Q2 Photography

Ten entries competed in the freestyle in the Grand Arena under the lights and with the stands full of cheering spectators. Ebeling and Indeed, in only their third Grand Prix Freestyle together, took the win with a score of 76.940%. His music and interpretation of it from the movie “Star Wars” scored an 8.5 from the panel of judges.

Exceeding his own expectations and going in with the goal of a clean test, Ebeling knew the key was nailing his first combination of the entrance in piaffe into the passage.

“That part of it for me felt the best it ever has,” said the 22-year-old rider from California. “I would have to say that my 21 one-tempis down the long side, into my pirouette, directly into the piaffe pirouette, that’s a combination that for her is quite difficult. She’s quite a long horse, so getting really compact in those movements is a little bit difficult for her, but the strength has really come in these last couple of months. That was very evident in that [part of the test]. She loves competing. I go in the show arena, and she lights up. It’s her favorite thing, which is good, because it’s one of my favorite things too.”

While Ebeling is working on a new freestyle for Indeed, he is borrowing the current freestyle from his other top horse, Illuster van de Kampert. The self-proclaimed “Star Wars nerd,” who even based his black tailcoat and helmet to represent Darth Vader “with the red for his lightsaber,” was extremely pleased to end his American winter circuit with a win before he heads to Europe to compete.

“We always talk about keeping the momentum going and I think for her especially, and a little bit too for my confidence with her, these last two classes have been outstanding for me to continue that,” he said. “I can’t thank my owners enough, Vantage Equestrian, and of course my mom for helping me with Illuster. I’m just really lucky to be in this position.”

Coming in second place in their third time in the Grand Prix Freestyle as well were Alice Tarjan (USA) and Donatella M, her 11-year-old Oldenburg mare by Fürstenball OLD x Jazz Time 2. They scored 74.040%.

The amateur rider from New Jersey has brought Donatella along from a four-year-old, and it has been a long journey to grand prix level.

“She doesn’t have the best hind leg mechanic, and the changes were really difficult to put on the horse. Had that horse not had such a good work ethic and try every day, I don’t think there is any way she could do it,” said Tarjan. “Two years ago, I didn’t have a clean left lead change. It was a disaster. It took a village to get a clean change on that horse, so the fact that she can actually do 15 clean one-tempis is sort of a miracle.”

But despite the challenge, Tarjan knew what she had in Donatella and has enjoyed the process of bringing her along. “It’s fun seeing the progression,” she affirmed. “That’s why I love doing it. You get a glimpse of it when they’re four or five and you’re like, ‘Wow, look at this!’, but it takes you years to develop it and show it off here.”

This was Tarjan’s first time competing at WEC – Ocala, and she reveled in the horse-friendly venue.

“It is absolutely fantastic. It’s like a real horse show grounds where you can hand walk them through the trees; there are grass and birds and a natural environment for the horses. The stalls are amazing. It’s a great environment for them,” she said.

Third place in the freestyle went to local Ocala rider Kerrigan Gluch, who rode Mejorano HGF, an 11-year-old PRE gelding owned by Kim Van Kampen’s Hampton Green Farm, to 73.725%. This was their first grand prix freestyle in a CDI, and it was particularly emotional for Gluch knowing that the music originally came from Hampton Green Farm’s Olympic horse Grandioso, who is also Mejorano’s sire. Gluch felt the freestyle, designed by Marlene Whitaker, highlighted his trot half-passes and the piaffe/passage in a high degree of difficulty, noting that the compact grey “thrives in those moments.”

Gluch was also able to tick off a goal on her list by competing in this freestyle in the Grand Arena.

“When I saw this facility before I moved here, I said, ‘I want to go down that chute and under the lights. I don’t know when it’s going to happen, but it’s a goal,’” she recalled. “I didn’t know if there would be people in the stands, and it was very full. It was incredible to trot in and see everyone there under the lights. It was a dream come true. To be able to do that tonight in front of a big crowd and representing Kim and Hampton Green Farm well and proud and showing off the breed is really special.”

Local rider Anna Marek of Dunnellon, Fla., topped the Prix St. Georges CDI3* on Friday morning with Cynthia Davila’s Duvel, receiving a score of 73.088% for a personal best. The top four in the class of 15 entries all received personal bests.

Marek has ridden Duvel for two years and has worked through Duvel’s sensitive and quirky nature to arrive at a place where, if he has a clean test, he can score well and win at the CDI small tour.

“It was a big learning curve for me to just figure out how to let him know that he needed to listen to me, and he didn’t need to be scared of what we were doing,” said Marek of the 14-year-old KWPN gelding by Florencio x Metall.

While Duvel wasn’t quite ready for large tour this year and Marek just had a baby in November, Marek said he will eventually move up. Having a horse that is so steady at the Prix St. Georges test is a treat for the rider who turned 33 years old on Thursday.

“He’s 14 years old, so at PSG and I-1, he’s like a machine,” she said. “He’s so much fun for me to go in there because normally when I’m riding at this level, they’re younger horses coming up. I’ve never had one that I get to ride a couple of years at these levels and really be able to go in there and nail it. That’s what is so fun about him.”

“It was so much fun in this ring,” she added. “It’s absolutely beautiful. Looking up and seeing the hotel and the stands all around, the arena is just huge and magnificent. It was awesome, and it feels like you’re at a world-class event. It’s pretty incredible that I come here to show, and I feel like I’m in a completely different world, but then I can go home 15 minutes away.”

Marek and Duvel will continue to compete at small tour at WEC Dressage III, contesting Saturday’s Intermediate 1 CDI3* and the Intermediate 1 Freestyle CDI3* on Sunday.

Competition at the World Equestrian Center Dressage III CDI3* continues on Saturday, April 16, with the Intermediate 1 CDI3* at 8 a.m. and the Grand Prix Special CDI3* at 1 p.m. For more information, visit www.wec.net.