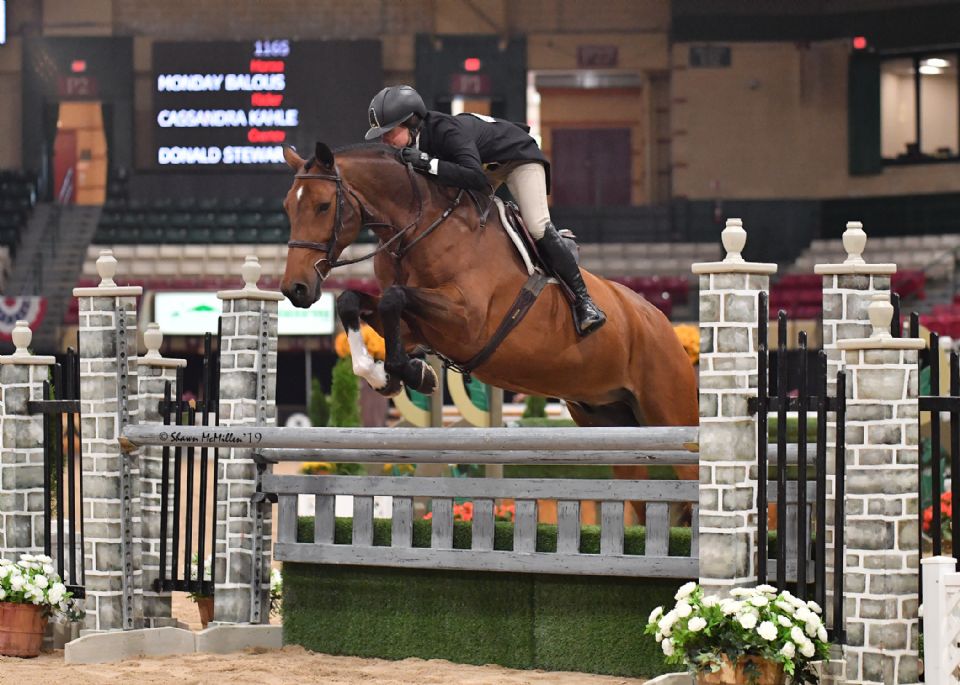 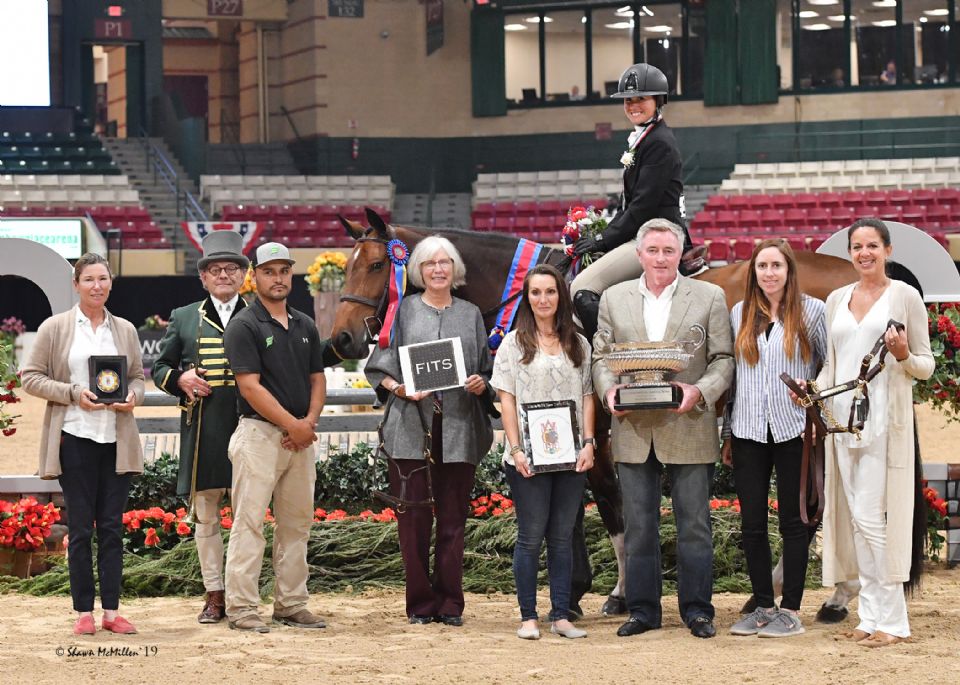 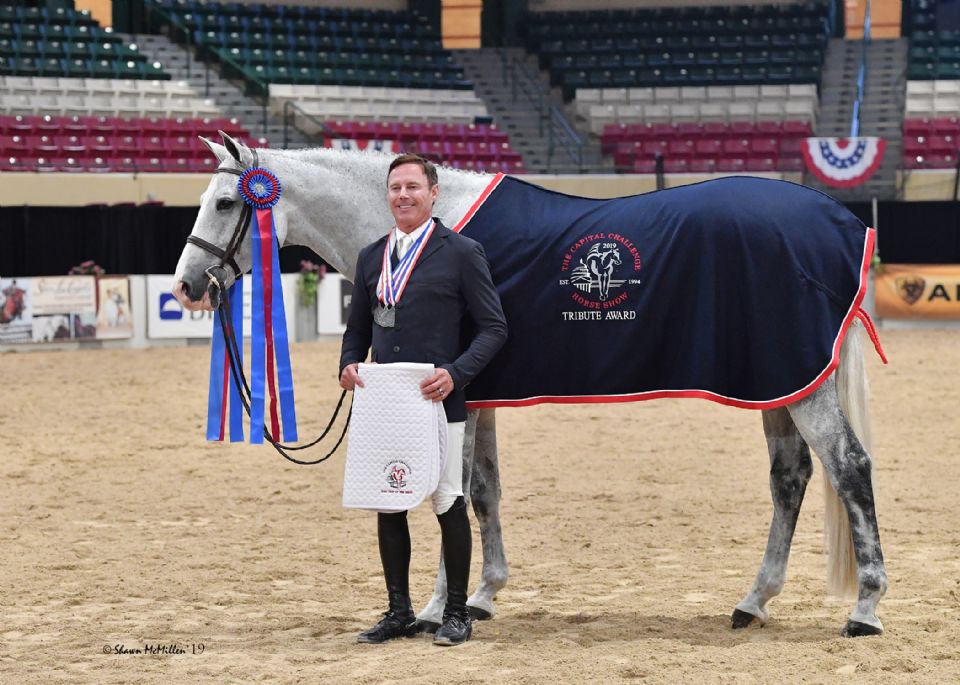 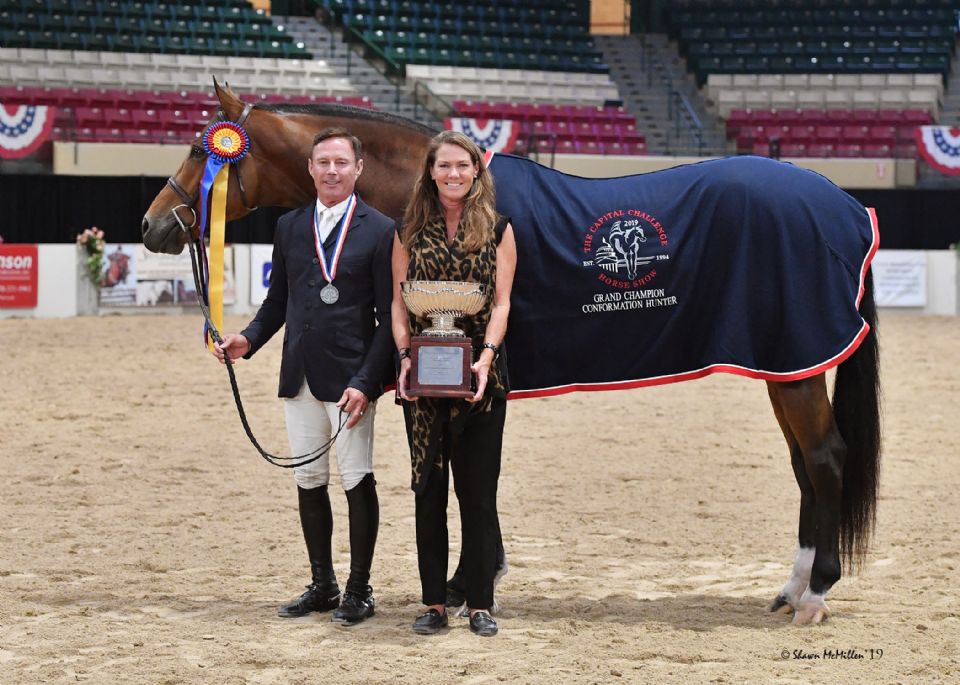 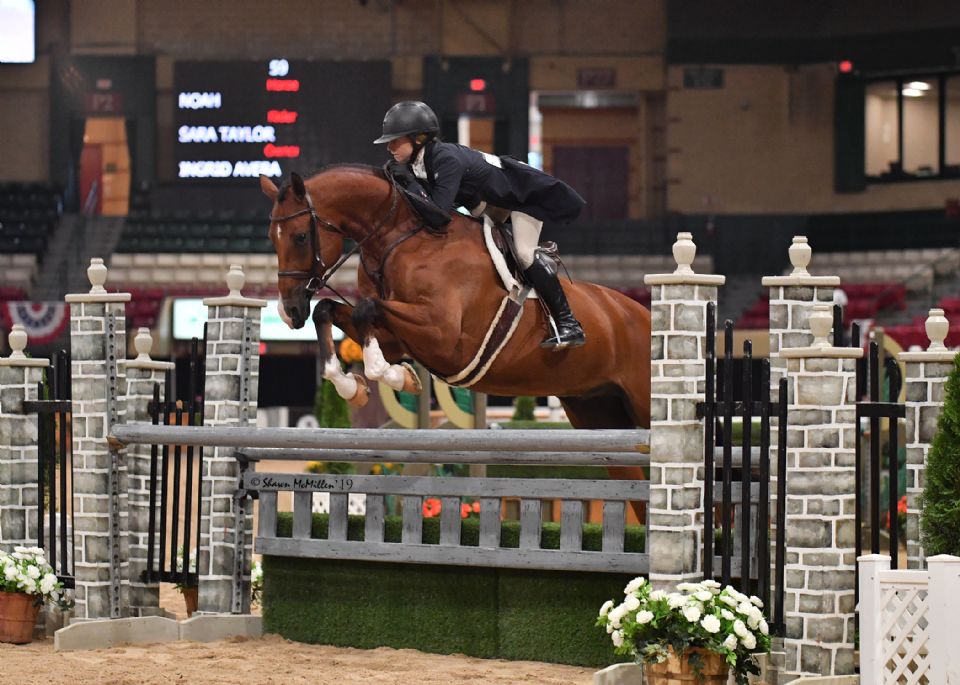 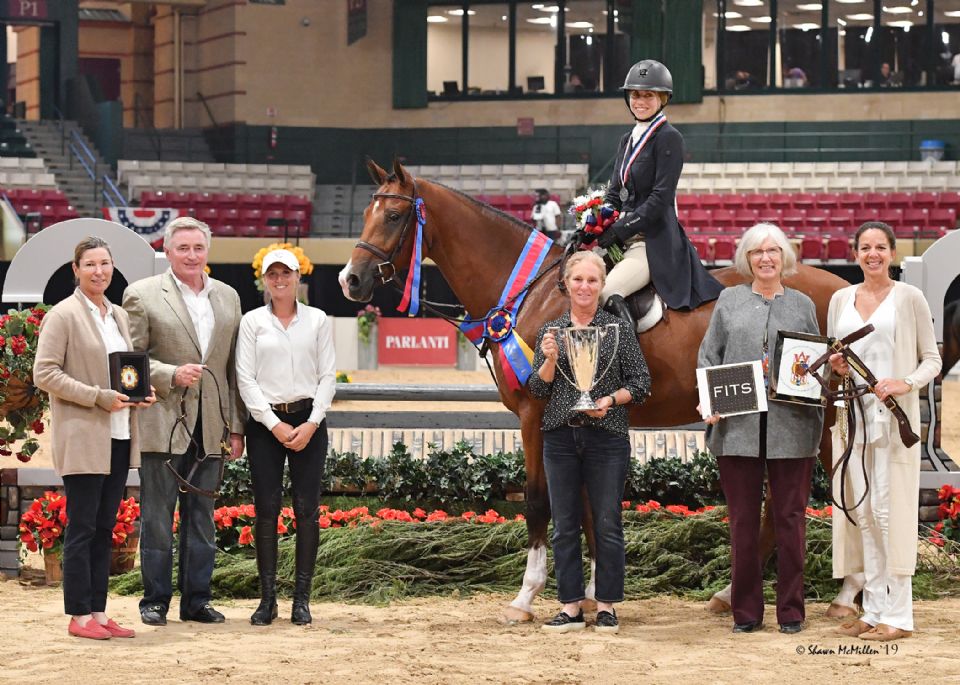 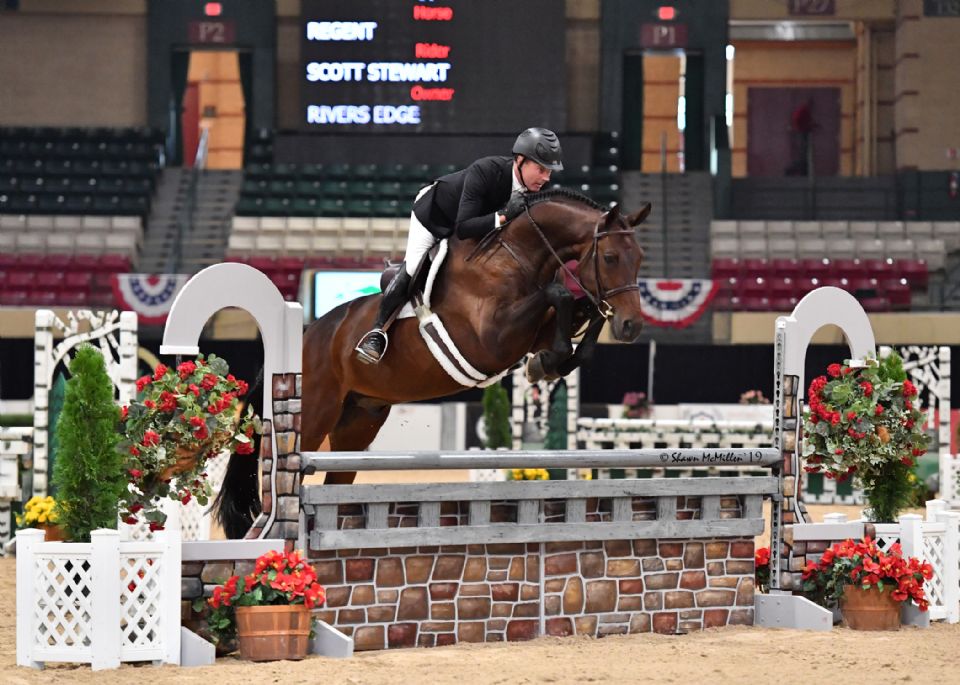 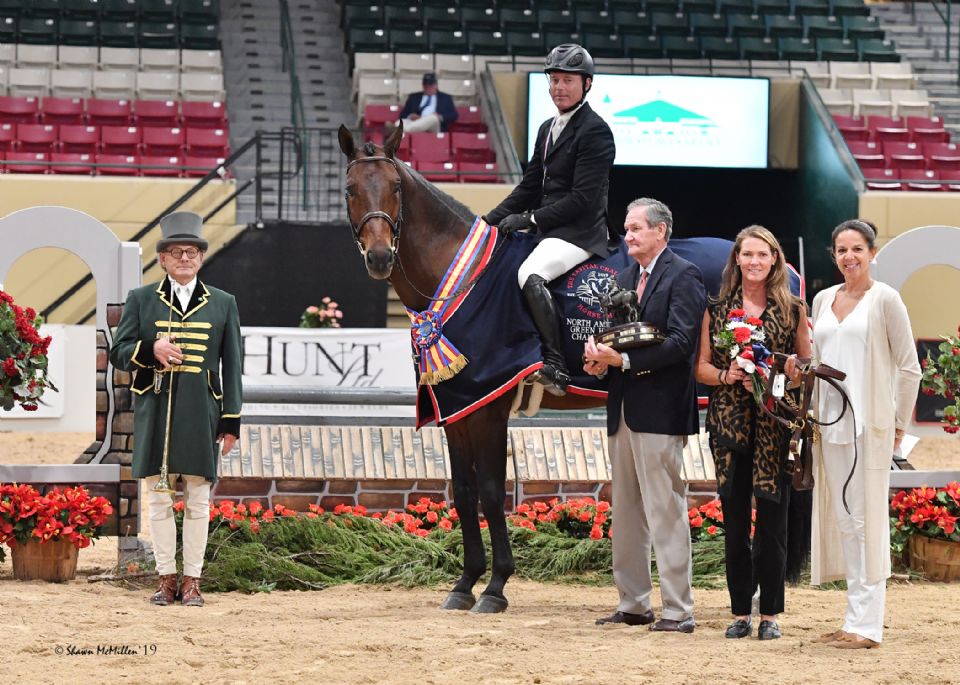 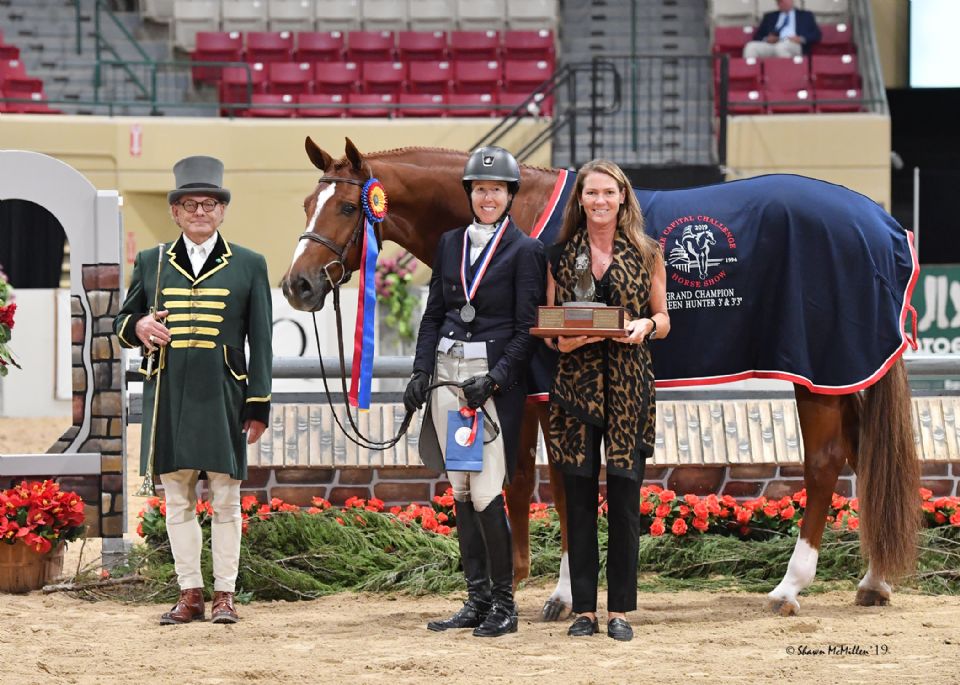 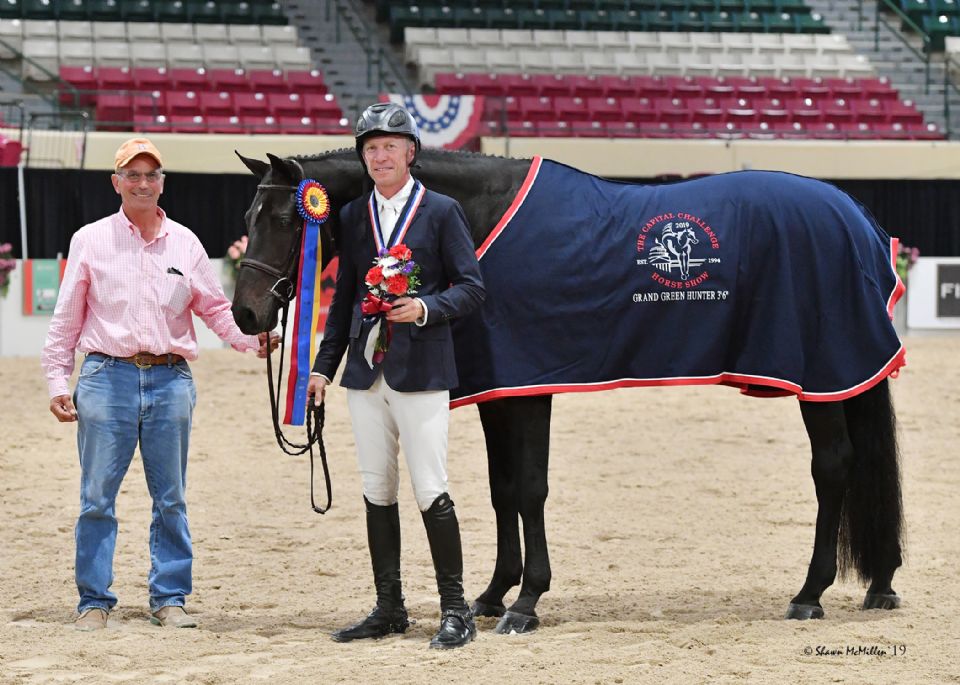 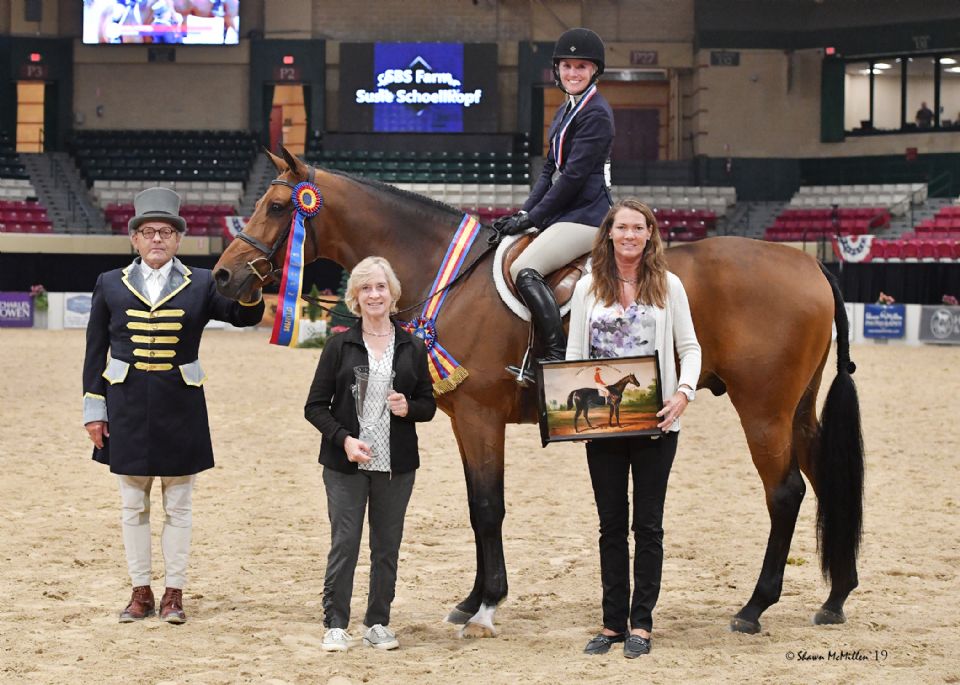 In her first year of competing in the class, young professional Cassandra Kahle of Langley, British Columbia, rode Monday Balous to capture the top prize in the $30,000 World Championship Hunter Rider (WCHR) Professional Challenge, sponsored by The Gochman Family, at the Capital Challenge Horse Show (CCHS) on Wednesday, October 2.

In the $5,000 WCHR Developing Pro Challenge, sponsored by the John R. Ingram Fund, Sara Taylor piloted Noah to the win.

Scott Stewart and Regent topped the $25,000 North American Green Hunter 3' and 3'3" Championship, sponsored by The Wheeler Family. The three classes marked a highlight day of CCHS, which runs through Sunday, October 6, at the Prince George’s Equestrian Center in Upper Marlboro, MD.

One of the coveted titles offered at CCHS, the $30,000 WCHR Professional Challenge brought out 33 of the best horses and riders in the country to compete over two rounds.

At the conclusion of the first round, Kahle and Monday Balous were tied for the lead with last year’s Professional Challenge winners, Amanda Steege and Lafitte de Muze, with both scoring 90.33. Kahle’s second-round score of 91.16, resulting in a 181.49 total, put her into the top spot.

“Going into tonight, I was nervous, but my expectations weren’t super high,” said Kahle, 27. “I just really wanted to have a good time. I’m really lucky to get to ride this horse. He’s like nothing I’ve ever ridden before; he’s amazing. He’s got a great rhythm and canter, so I went in and picked up a good gallop. He kind of shows you the distances and the jumps.”

Kahle and Monday Balous, a 10-year-old Dutch Warmblood gelding by Balou du Rouet, had to qualify for the Professional Challenge at CCHS, and they did so with ribbons in the High Performance division. “I think I was just relieved to make it into the class. It was something I really wanted to do,” Kahle said. “I’ve watched this class since I was a kid. I admire the riders; they’re the top riders in the country that compete in this class. I think it’s something every hunter rider would love to do.” Kahle has competed in the WCHR Developing Pro Challenge in previous years.

Kahle, who grew up riding with her mother, Natasha Brash, has worked for Emil Spadone of Redfield Farm in Califon, NJ, for six years. “I’ve gone from riding young hunters to High Performance hunters and started doing the jumpers and some grand prix classes,” she said. “I don’t think I could have progressed this much without the opportunities I’ve had at Redfield.” Spadone co-owns Monday Balous with trainer Don Stewart. They bought the horse together in 2017, and he’d been showing with students of Stewart’s and Jimmy Torano until September, when Kahle piloted him to third in the $250,000 Diamond Mills Hunter Prix at HITS Saugerties in New York. Capital Challenge was just Kahle’s second show with the horse.

Sara Taylor added another win to a successful year by topping the $5,000 WCHR Developing Pro Challenge. She and Noah, a nine-year-old warmblood, were best out of 31 entries in the class.

“I’m really overjoyed that I won this class. My whole family has been wanting this for me!” said Taylor, who had ridden in the Developing Pro Challenge twice before. “This is one of my favorite horse shows, so to qualify for the WCHR Developing Pro Final and then to have it all come together to win is amazing. My mom’s going to be crying.”

Taylor, 28, grew up riding in Massachusetts and now has worked for John and Kitty Barker at their Eight Oaks Inc., in Middleburg, VA, for five years. “They’ve taken me under their wing and taught me what it means to be a good horseman and how to run a successful business and take care of your horses most of all,” Taylor said.

She and Noah claimed the title in the Platinum Performance USHJA 3'6"/3'9" Green Hunter Incentive Championship in August. Taylor has ridden Noah for three years for owner Ingrid Avera.  “The biggest wins I’ve had are with him, so I owe a lot to him,” Taylor said. “It’s easy for him, so it makes you as a rider feel so easy. It felt like he was there for me every step I felt confident the whole way around.”

The win in the $25,000 North American Green Hunter 3' & 3'3" Championship, sponsored by The Wheeler Family, went to Scott Stewart and Regent, owned by Rivers Edge.

Stewart, of Wellington, FL, and the seven-year-old Zangersheide gelding (by Van Helsing) were one of 33 entries that qualified to compete in Wednesday’s championship class based on their results against the more than 140 entries in the six Green Hunter 3' and 3'3" division offered on Monday and Tuesday at the Capital Challenge Horse Show.

The top 12 entries returned in reverse order of their standings to jump a second course, and Stewart and Regent replicated their first-round performance, again earning an average score of 90.33 to take over the top of the leaderboard with a 180.66 total.

Boyd and Ravello were the final pair to return, and while they held a slight edge coming into the second round, their second-round score of 89.41 would put them just shy of Stewart and Regent for second place on a total score of 180.07.

For the victory, Stewart and Regent were awarded the Beverly Brooks Solter Memorial Trophy, donated by Hilary Scheer Gerhardt and Zan Martin Dillon.

“This is Regent’s first actual show here in the country,” said Stewart of the horse he purchased in Europe with Ken Berkley in July of this year. “He did show in Europe quite a bit in some jumper classes, but this is his first time doing anything huntery.

“This far exceeded my expectations,” continued Stewart. “I know that he can jump big jumps and do all that, but he’s never been in the hunter environment. I had a really rough beginning [to the class]; all of my horses did a little bit of something or I made a little mistake. I was a little bit apprehensive about it, but he was just perfect. I think he just jumped every jump the same and accurately.”

Stewart and Regent qualified for the class out of the Green Hunter 3'3" divisions, and Stewart hopes that Regent’s winning debut performance is just the beginning for the scopey gelding.

“He’s just an incredible jumper and stridey and scopey,” said Stewart, who initially tried the horse more than a year ago but was not as interested at the time. “[The first trial] was at the end of a really long day. We got to where he was, and he was sort of wild and fresh in a little indoor ring. We were not that motivated about it. Finally, someone reached out to me in the end of June that they had this horse, and it ended up being the same horse. I’d always followed him through the horse shows and watched him show, so I guess he ended up in the right place for me.

“We’re hoping he’s going to go on to be a high performance horse in the future,” continued Stewart. “He’s definitely one of the better jumpers, and all the scope to go with it.”

In addition to rewarding Stewart and Regent with the North American Green Hunter Championship win, the Capital Challenge Horse Show also named a Grand Champion Hunter 3' and 3'3" champion. The overall tricolor honor, sponsored by David Belford and Christopher Payne of New Hope LLC, was awarded to Canyon, ridden by Patricia Griffith and owned by Lexi Maounis.

Competing in the Green Hunter 3’ 6 and Under division, Griffith and Canyon also earned the EMO Green Hunter 3' and 3'3" Trip of the Show with a score of 90.

About the Capital Challenge Horse Show
Now in its 26th year, the Capital Challenge Horse Show, presented by the World Equestrian Center, sets itself apart with a distinct and unique focus on preeminent hunter and equitation competition. Held at the Prince George’s Equestrian Center in Upper Marlboro, MD, the 2019 edition of the Capital Challenge Horse Show is taking place now through October 6. The 10 days of competition include prestigious equitation events, jumper divisions, the World Championship Hunter Rider (WCHR) Finals, the $25,000 3’ and 3’3” Green Hunter North American Championships, and more, with many of the country’s best horses and riders competing in junior, amateur, and professional divisions. For more information, visit www.capitalchallenge.org.