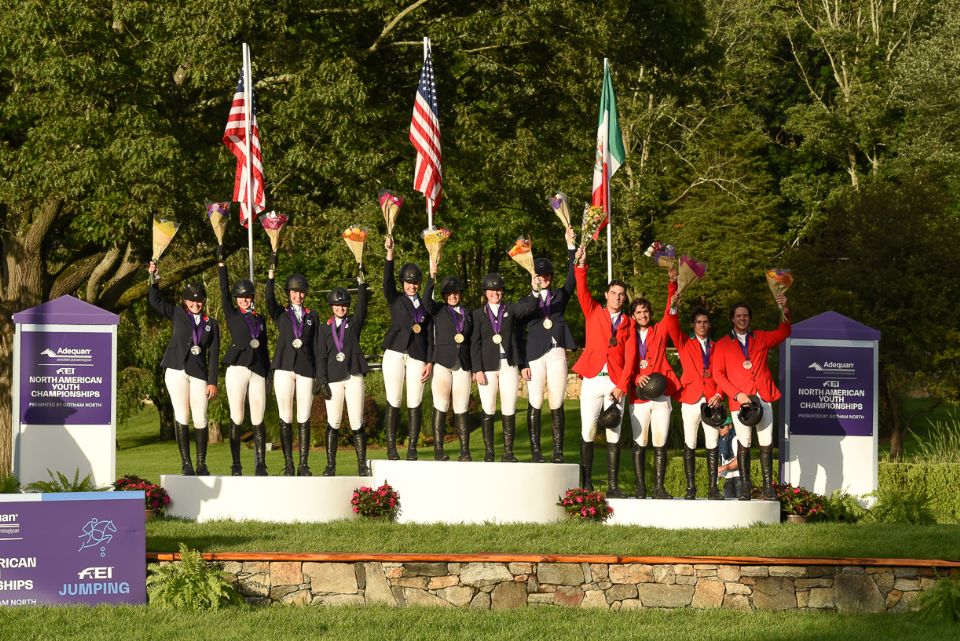 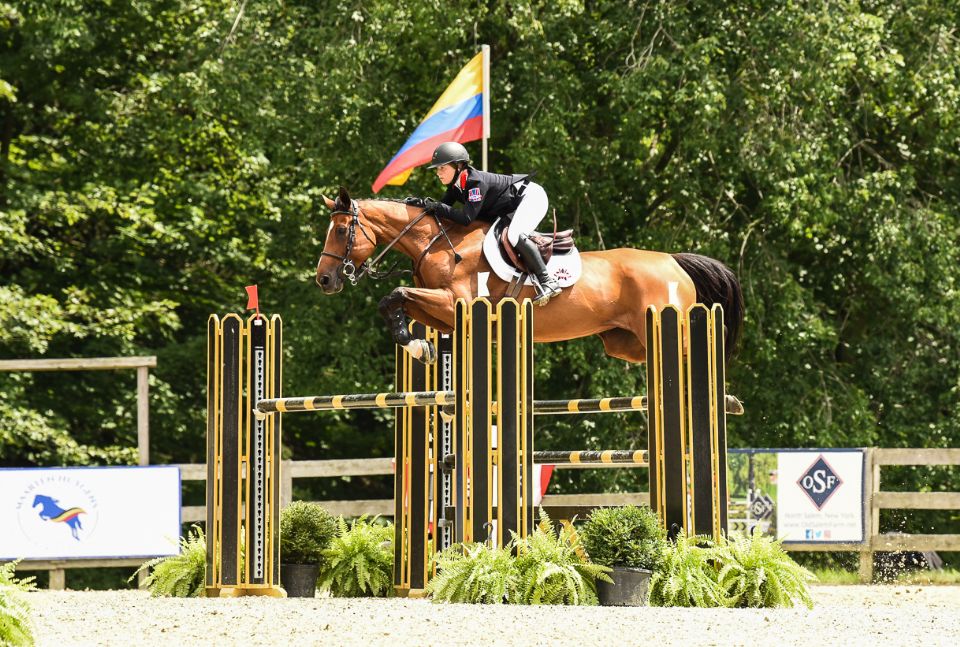 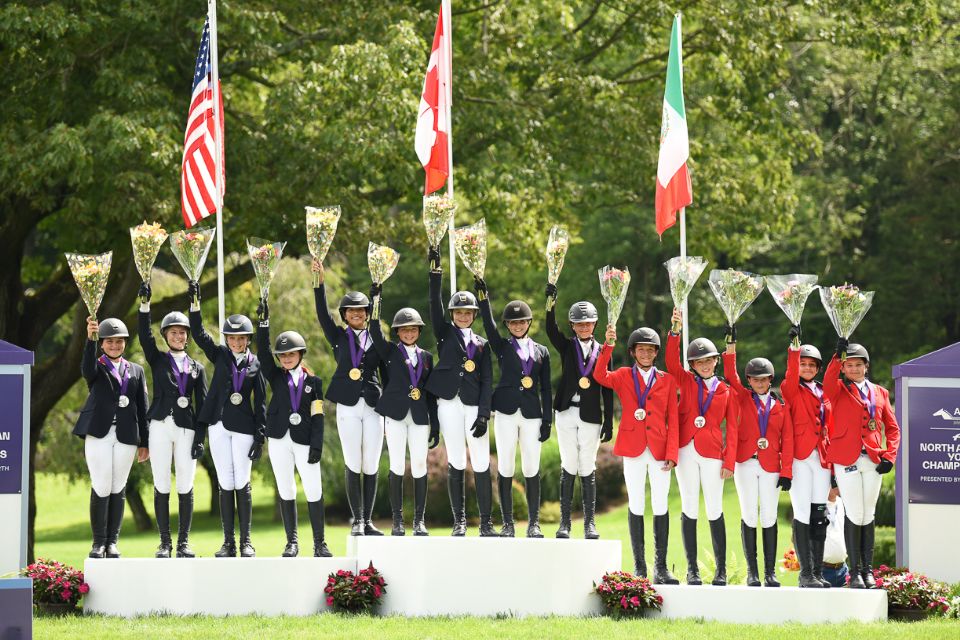 In the Young Rider division, the Zone 2 team of Katherine Strauss of New York City, NY, Madison Goetzmann of Skaneateles, NY, Samantha Cohen of New York City, and Ailish Cunniffe of South Salem, NY, finished on a score of 9.80, more than 20 points ahead of the silver-medal USHJA Zone 10 team and the Mexican team that took bronze.

“I’m so excited to help add a gold medal to Zone 2’s long list of medals,” said Strauss, 19, who rode Katherine Strauss LLC’s All In, a 13-year-old KWPN gelding, on her fourth NAYC team. “We’re all extremely grateful and proud to represent a team that’s historically been so successful. There are so many riders who rode for Zone 2 who we all look up to today, like McLain Ward, Georgina Bloomberg, Reed Kessler, and the list goes on. We’re really thrilled to be here and to have the opportunity to gain this team experience.”

This year’s NAYC brought a format change, as scores from the Individual Qualifying Round counted toward the team total for the Young Rider and Junior divisions. That meant that Zone 2 came into the two-round Team Final today in the lead, but only by three points.

“After yesterday, we were all feeling very confident, but we had a lot of work to do today with two rounds,” said Cohen, who rode her own Carmen, an 11-year-old KWPN mare, to scores of zero and four in the Team Final. “We all felt very comfortable with our horses, we had great team spirit, we all knew that we could do it. I think we all had a good first round and there was some pressure in the second round, but we all kept our cool and were able to do it.”

Cohen, 17, was the only NAYC first-timer on the Zone 2 team. This was Cunniffe’s third time at NAYC and her second consecutive Young Rider team gold medal. “Being on Zone 2 is an honor and I’m lucky to be with these girls; they’re some of my best friends. It means so much to me to not only be able to compete against them, because we do that every week, but also to compete with them on a team; it’s an amazing experience,” Cunniffe said.

Cunniffe, 21, rode Elm Rock LLC’s Baloucento, a 13-year-old Oldenburg gelding, to scores of four and zero. “I went first for our team today, which was a little bit of pressure, but I’ve been in that position before, so that was helpful. For me, I was just focusing on sticking to my plan. I had one down in the first round and I was just trying to fix that mistake in the second round,” she said.

Goetzmann, 18 and competing in her third NAYC, turned in the team’s only double-clear performance over the two rounds aboard her own Prestigious, an 11-year-old Westfalian gelding that she has owned for two years. “He’s the horse that has taken me up to the bigger classes,” said Goetzmann. “I jumped my first four-star classes this summer. He’s taught me so much as a rider. He’s a bit of a sensitive horse, so that’s helped me adapt to that type of riding. And he always wants to jump clear. I couldn’t ask for a better horse.

“Also, I think I speak for on behalf of all the riders at this championship in saying that we’re so grateful to have support from Georgina Bloomberg and her Gotham North, and Adequan and Old Salem Farm for these championships,” Goetzmann continued.

Mckayla Langmeier of Zone 1 currently leads the individual standings over Goetzmann in second.

The USHJA Zone 10 team will take the silver medal home to California after Hayden Zadel, 18 and from Los Gatos, Calif., riding HHZ LLC’s Triskel der Kerliven, an 11-year-old Selle Francais gelding; Hannah Loly, 16 and from Rancho Santa Fe, Calif., on her own 12-year-old Swedish Warmblood mare, Ayma de la Demi Lune; Ransome Rombauer, 19 and from Saint Helena, Calif., riding her own Emorkus Re, a nine-year-old KWPN gelding; and Natalie Dean, 19 and from Palo Alto, Calif., on her own 13-year-old Oldenburg mare Chacco’s Goldy.

There was simply no catching the USHJA Zone 5 team in the USHJA North American Junior Rider Show Jumping Team Championship as they finished more than 10 points ahead of the Canadian team that took silver and the Mexico West team that took bronze.

“Being on a team has always been a dream of mine, but to win gold on team with my three best friends is a dream come true,” said Alexandra Pielet, who jumped two clean rounds for Zone 5 on Co-Pielet LLC’s Helene VE, an 11-year-old BWP mare. Pielet also sits in second place in the individual standings; Elli Yeager from Zone 4 leads the individual standings.

Pielet, 17 and from Highland Park, Ill., joined forces with Charlise Casas, 17 and from Chicago, Ill., Paige Matthies, 17 and from Lake Leelanau, Mich, and Emma Kurtz, 18 and from Hudson, Ohio, for the gold with just 17.88 penalties after the first day’s speed round and the two rounds of the Team Final.

“I’ve been watching riders at the NAYC team for the past few years and it’s always been a goal of mine to be on one of these teams, so I’m very happy to have achieved that,” said Matthies, who rode Barbara Smith’s Dirkie Z, a 13-year-old Zangersheide gelding, to scores of four and zero faults.

It was the first NAYC team experience for both Matthies and Kurtz, who piloted Chagrin Saddlery LLC’s nine-year-old Hanoverian mare Pippi to just one rail in Round 1 and a clear second round. “My horse is relatively newer to me, so I’m still trying to figure her out. The first round I had ‘c’ of the triple combination down, which was my mistake. In the second round we fixed that,” Kurtz said.

Casas had team experience, having ridden on Always Faithful Equine LLC’s 13-year-old Selle Francais gelding Rembrandt Blue in the Junior NAYC division last year for Zone 5 alongside Pielet, but they finished out of the medals. “I’ve known all these girls for years, and they’re my good friends, so be able to win a gold medal with them is really special,” she said of the experience.

“Winning a gold medal for Canada is an amazing feeling,” said Charlotte McLaughlin, 14 and from Ottawa, Ontario. “I feel so proud of myself, my horse and my teammates as well. It’s a huge opportunity, especially since we’re all so young.” McLaughlin turned in two clear rounds aboard her Bronan, a 10-year-old KWPN gelding, and also leads the individual standings.

“This has been a goal of mine since I started riding when I was six,” McLaughlin continued. “I’m so proud to be doing this at such a young age. I never thought it would happen so soon, but I have to thank my amazing coaches and [chef d’equipe Beth Underhill] so much for this opportunity. It’s been amazing.”

“It feels great to win for Canada, especially since we just missed the gold at [the Children’s Nations Cup at the Thunderbird Odlum Brown BC Open CSIO5* in Langley, British Columbia in May],” said Krawitt, who hails from Calgary, Alberta and jumped on that silver-medal team in May with Stephenson and Chernoff.

“The last year I’ve focused on preparing for this and making the team and I feel so proud and I’m so proud of all my teammates,” said Chernoff, of Calgary. “Today in the warm-up my horse was a little bit quiet, but I always know she’s going to wake up in the ring. Today she walked in and felt very good. I actually had control, which sometimes I don’t!”

Stephenson also put in two clear rounds for Canada with Chaccana, a horse she’s only ridden since May. “My horse is kind of new to me. She’s a very kind horse and she has blood, but you have to create it a bit. Today she was very fresh in the first round, but then in the second round, she was a little bit tired. But once she gets in the ring, I know she has my back and it’s a great feeling,” said Stephenson, from Calgary. “It was a real goal of mine to just get here. I’m so proud to be here with everyone that I cherish these moments with. Thank you to everyone who supports us.”

Check out the live stream of the NAYC on USEF Network continuing on Satruday at 9:00 a.m. EST.