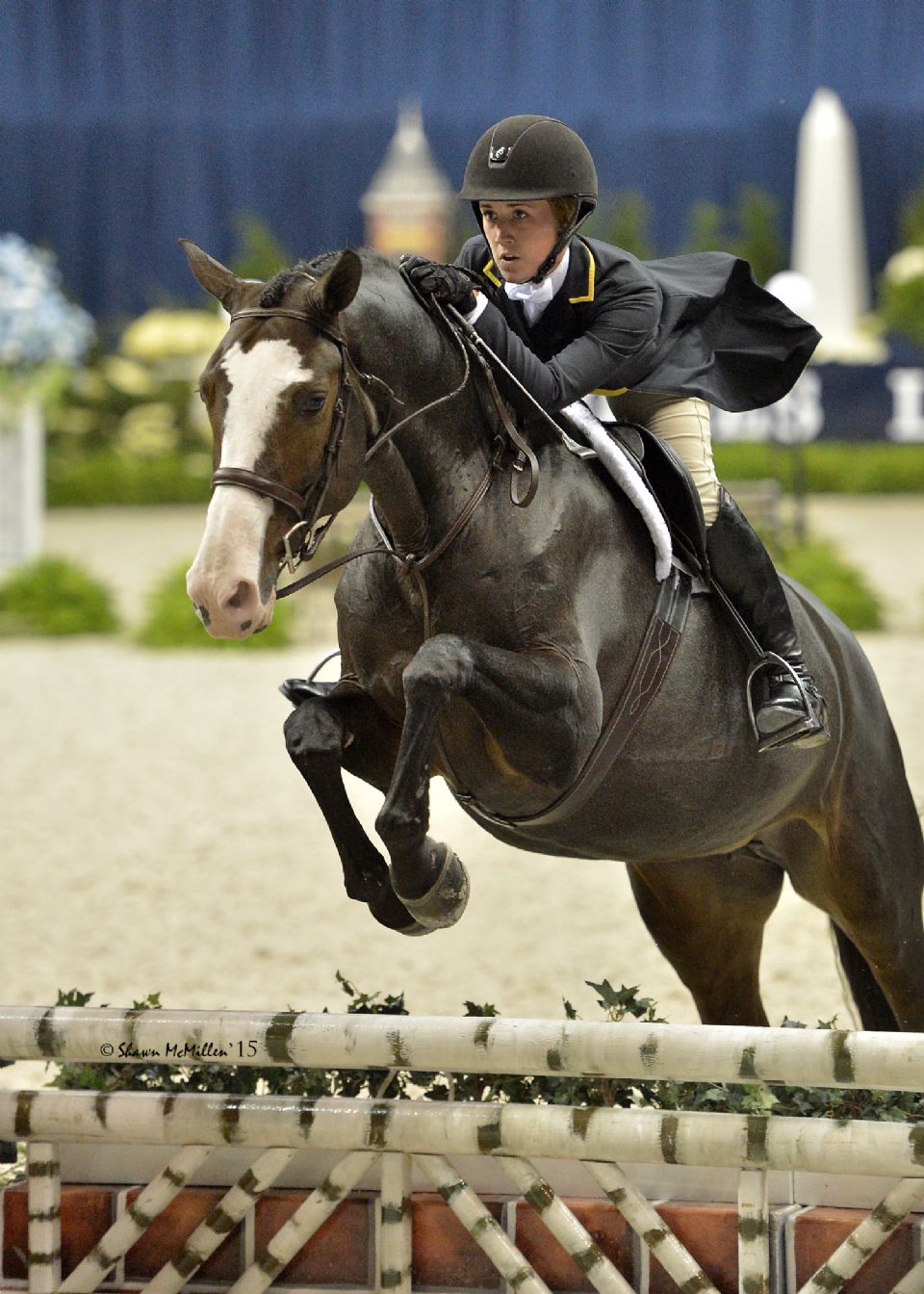 Samantha Karp and Zentina B
Photo by Shawn McMillen Photography 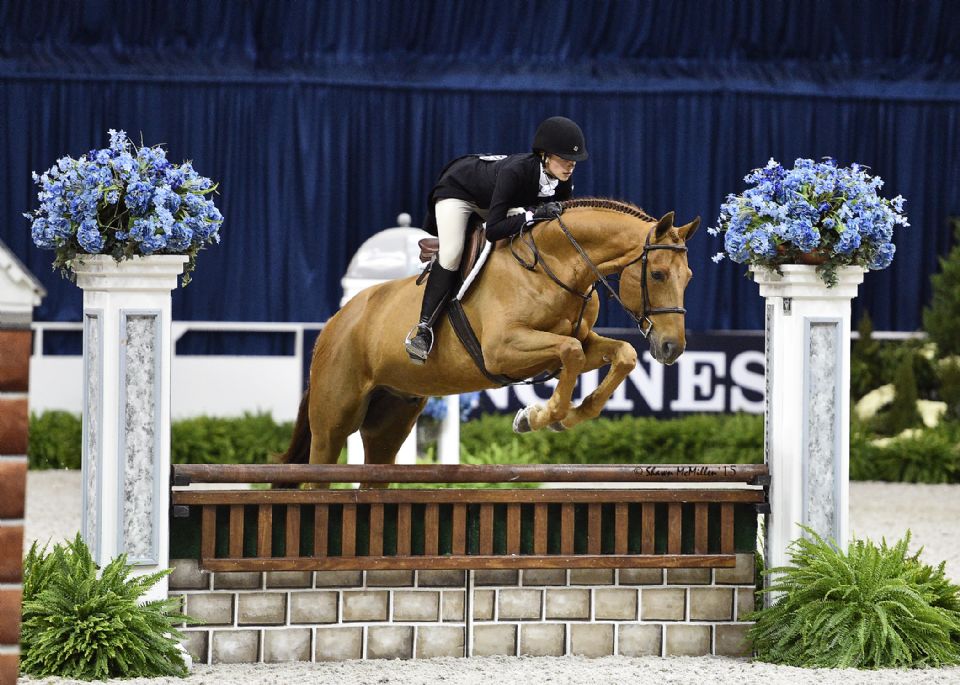 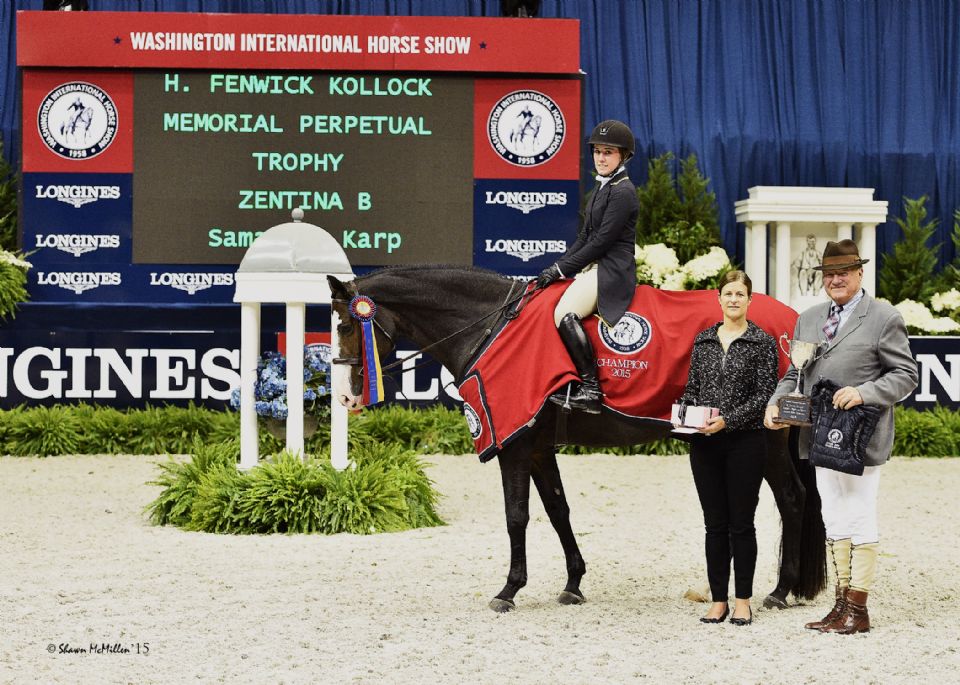 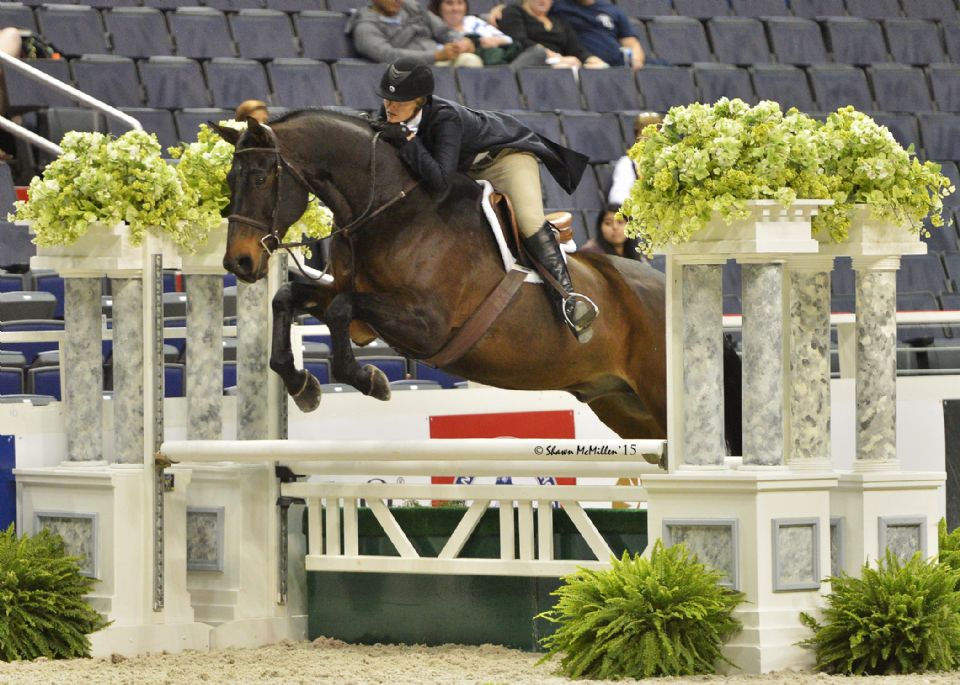 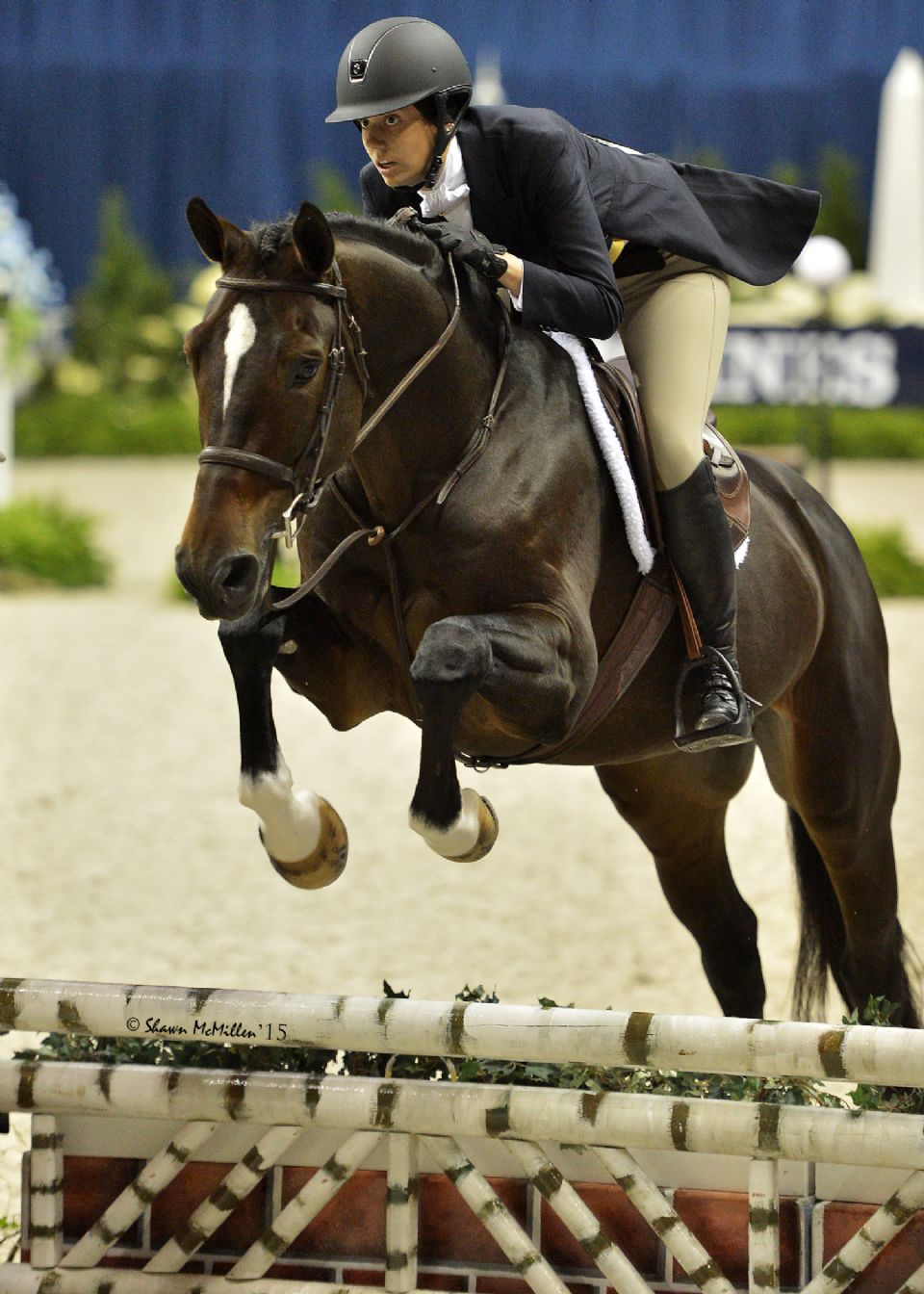 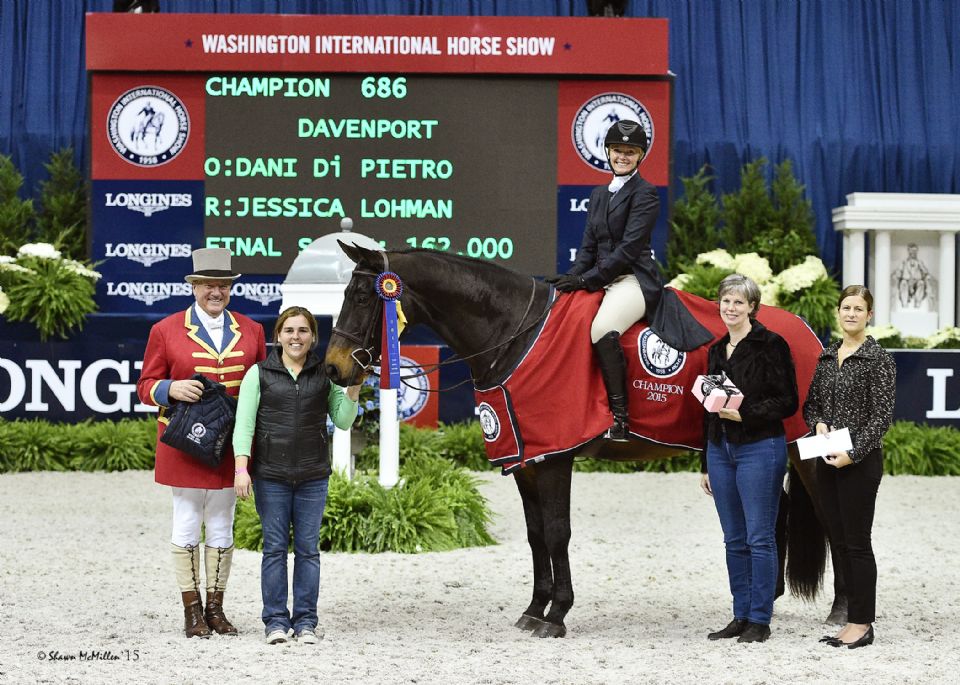 Jessica Lohman and Davenport in their winning presentation.
Photo by Shawn McMillen Photography 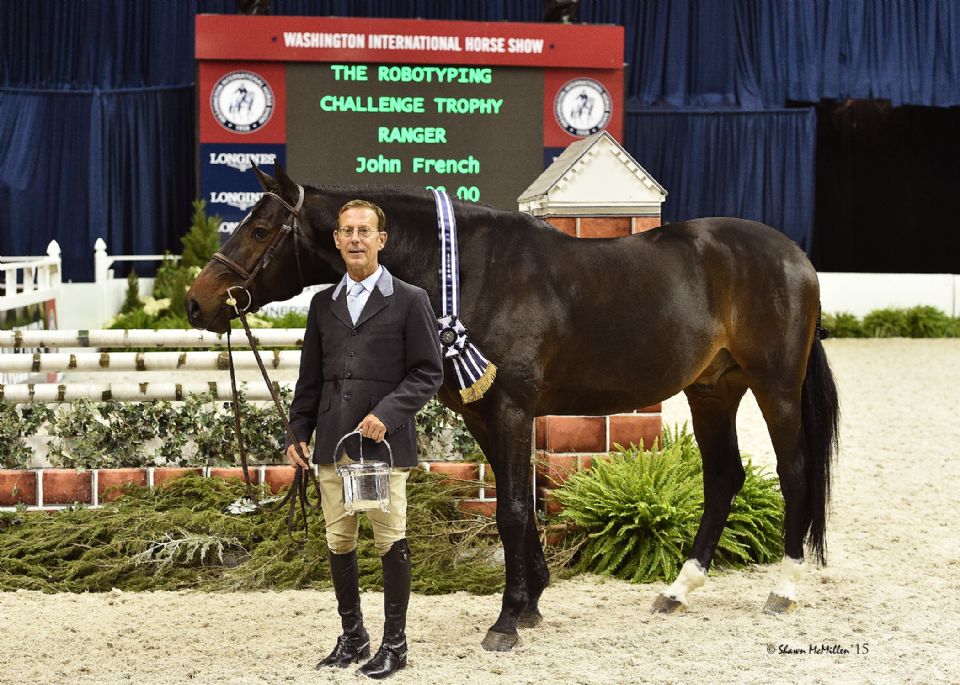 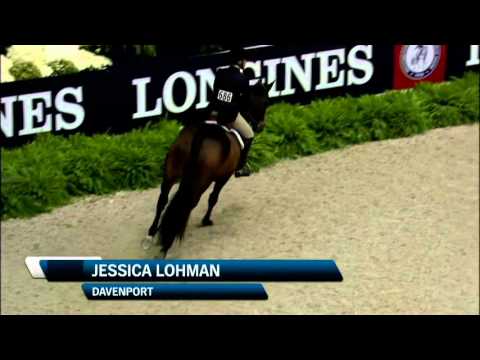 The 57th annual Washington International Horse Show (WIHS) kicked off six days of competition at Verizon Center in downtown Washington, DC, Tuesday. The day featured professional and amateur hunters competing in the first classes of their divisions, as well as year-end championships for the child and adult hunter competitors. This year’s WIHS continues through Sunday, October 25, featuring world-class competition in the hunter, jumper and equitation disciplines.

Tuesday’s highlights included the $10,000 WIHS Children's Hunter Championship, sponsored by The Heisley Family Foundation. Thirty-two entries showed over a beautiful first round course set by Kenneth Krome, of Westminster, MD, and the top 12 returned for a second round to determine final results. Samantha Karp earned back-to-back scores of 87, totaling 174 points to secure a concrete win with her horse, Zentina B. Carly Martin finished second aboard her own Czech Mate with scores of 82 and 79 to total 161. Lekha Ramachandran guided Jennifer Basile’s Playmore to third place, scoring 74.50 and 84, for a total of 158.50.

For the win, Karp and Zentina B were presented the H. Fenwick Kollock Memorial Perpetual Trophy, donated by Friends of Fen. The 18-year-old rider trains with Heritage Farm, traveling to spend her summers in Katonah, NY, and remaining the rest of the year in her hometown of Wellington, FL. Karp purchased Zentina B, an 11-year-old Dutch Warmblood mare (by Casantos), almost one year ago.

“I originally bought her to be my jumper, and I found out that I did not really like doing the jumpers,” Karp noted. “We decided to do her in the hunters, just for fun, to see if I could get some confidence, and her first week out, she won. She has won basically every show she has been to since that. She had never done the hunters in her life until this year, but I think she has really enjoyed it.”

Tuesday was Karp’s first time competing at WIHS and a memorable experience as the rider finished out her junior career and prepares to become an amateur.

“This is my first time ever doing a season of indoors. It was nerve-wracking, but she (Zentina B) is a pro. She has been to indoors before,” Karp explained. “I do not think I could have been on a better horse to show me the ropes and give me experience doing this. She did an amazing job, and I cannot thank her enough for that.”

The $10,000 WIHS Adult Amateur Hunter Championship, sponsored by The Linden Group at Morgan Stanley, concluded day one at the 2015 WIHS with 23 entries showing over the first round course and the top 12 returning. The win went to Jessica Lohman, of Poolesville, MD, riding Dani Di Pietro’s Davenport to scores of 84 and 78 for a two round total of 162. Whitney Lind and Whish LLC’s Carnaval Elite earned scores of 72 and 86 to finish second with 158 points. Jacquelyn Maggiore rode her own Contina to third place honors, scoring 79 and 77 for a 156-point total.

The overall feeling for Jessica Lohman this evening was “accomplished.” The 37-year-old rider trains with her husband, Alan Lohman, out of their Lohman Stables in Maryland. She works a fulltime job as Commercial Livestock Marketing Manager at Southern States Cooperative, an American farmer-owned agricultural supply cooperative, and was busy working in Miami this winter when she asked her husband to find a horse that she could compete. Luckily, Davenport (also known as Dylan) became available while his owner was away in India doing non-profit work for the year. Lohman was fortunate enough to lease the 14-year-old Hanoverian gelding (by Weitmeyer) to compete this season and now feels like they have come full circle with an exciting conclusion to their year.

“Dylan needed a job this year, but he didn’t need to work hard. He just needed to do something,” Lohman detailed. “It was the beginning of a phenomenal year the first time I sat on him. I feel very fortunate and I feel accomplished, because if we don’t win, it is because I did something stupid. That is the only way about it. The horse never does anything wrong. I was second here in 2010 and sixth in 2011 on a horse my husband owns named Wise Counsel. I very much wanted to win this particular show. I have had a good fall (season) on this horse at the indoor finals and I didn’t want to peak before this show, so I guess everything just lined up. I painted my nails blue, I wore a blue hairband today, I wore a navy sweater, and Dylan always gets braided in blue because he is perfect. It was one of those things that I needed to check off the list.”

Lohman credited her husband, trainer Deloise Noble-Strong, and barn manager Kathy Keep among those that helped her achieve this great accomplishment.

“My husband is amazing,” she acknowledged. “That trainer, student, husband, wife dynamic does not work for everybody, and he and I have been married for ten years and we have been together for 13 years. We have always known what those boundaries are. It has been a very easy dichotomy to maintain.”

“Deloise helped me a good bit throughout the year too,” Lohman added. “Kathy Keep has worked for us forever. A lot of wonderful, generous people came together and all of the stars aligned tonight to make this happen. It has been an amazing experience.”

The Washington International Horse Show continues on Wednesday with championships for the professional and amateur-owner hunter divisions as well as the $10,000 Children's Jumper Championship, sponsored by Shamrock Ventures, during the day. The evening session, which begins at 7 p.m., will feature the $10,000 Adult Jumper Championship as well as the $10,000 International Jumper speed class, sponsored by Amalaya Investments. For more information and full results, please visit www.wihs.org.