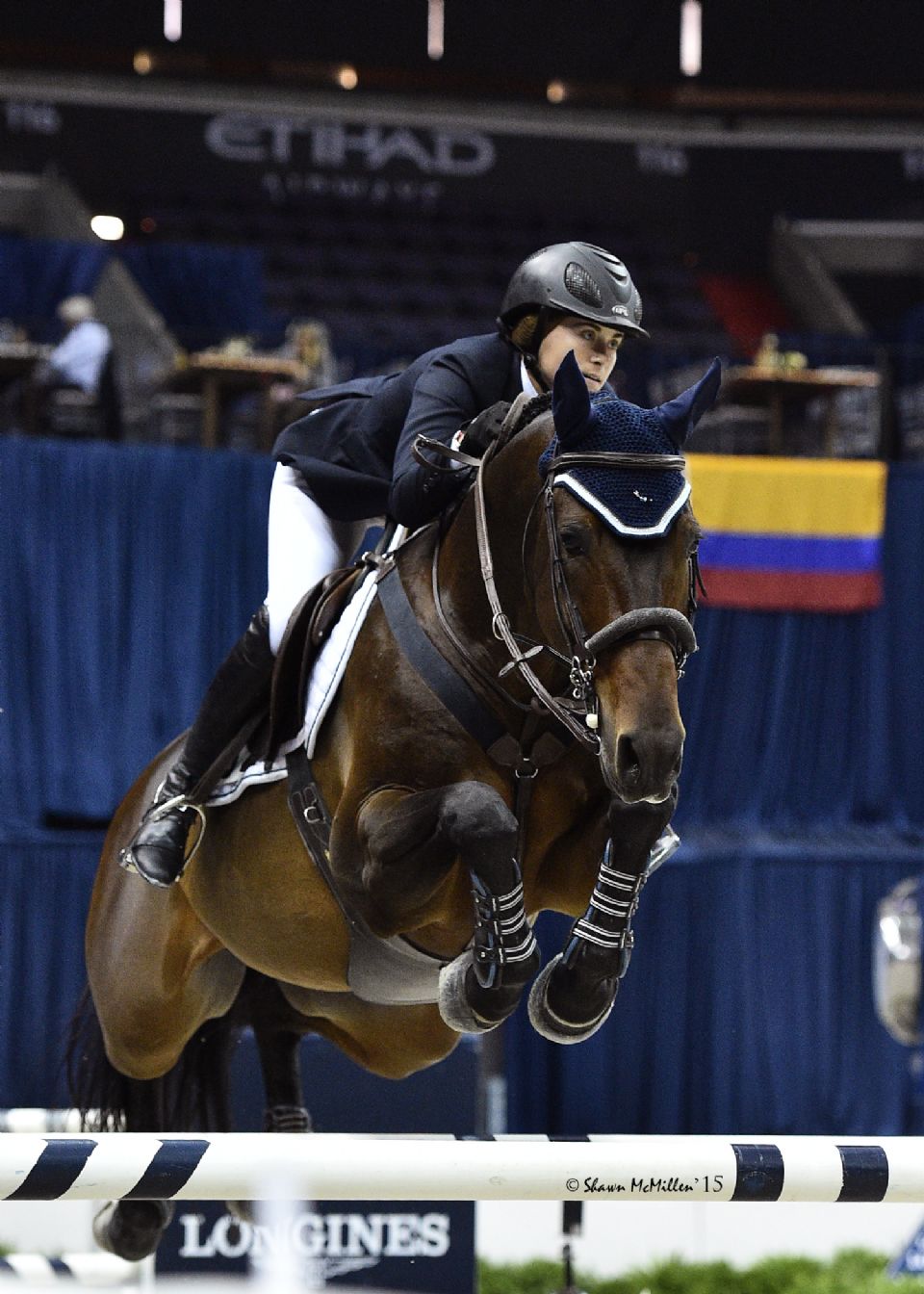 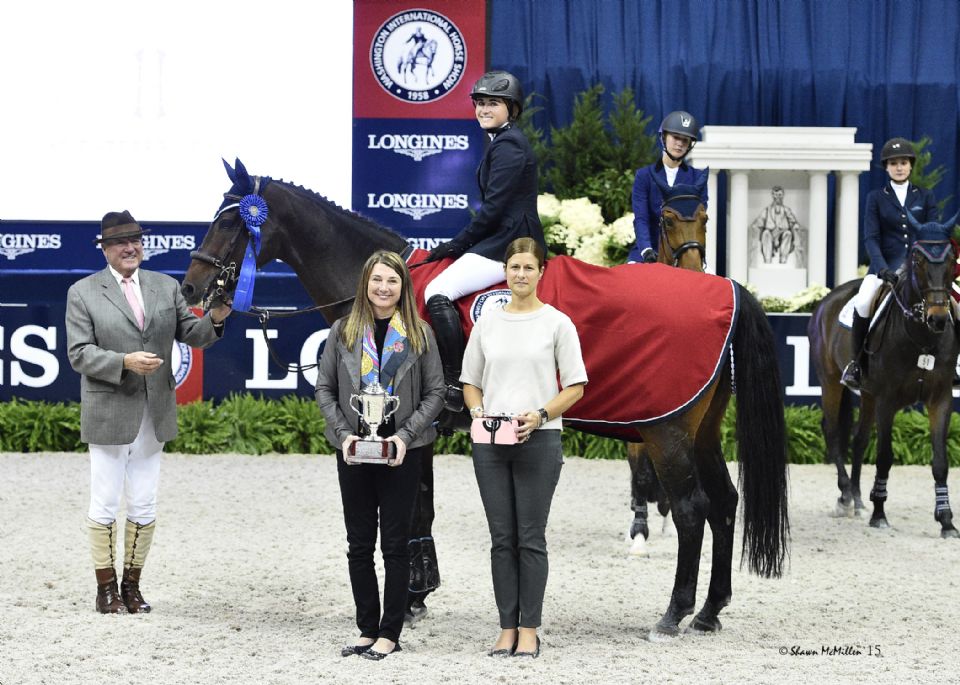 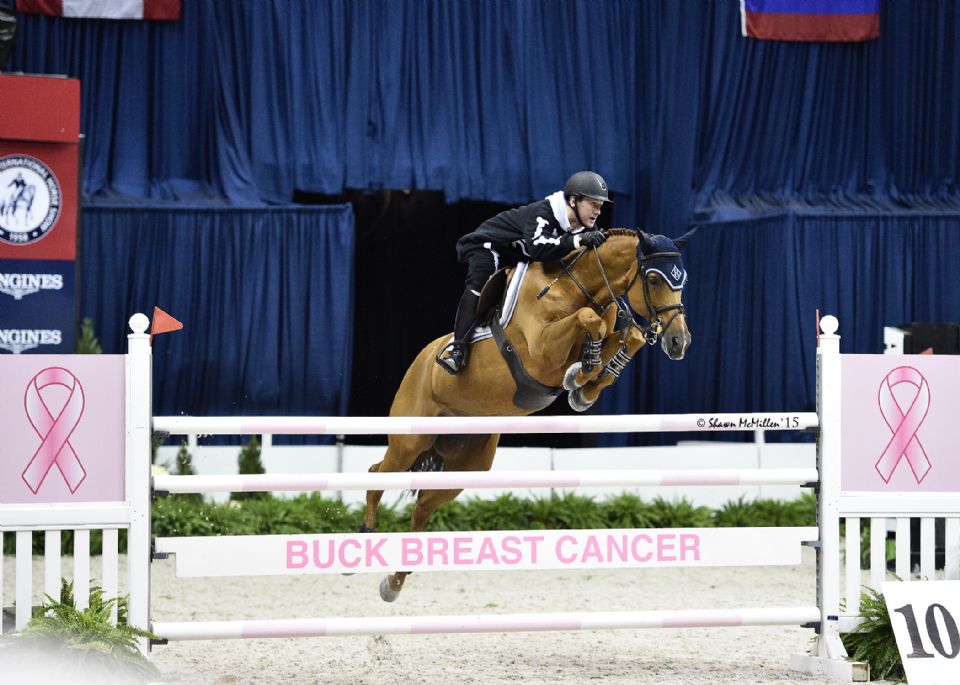 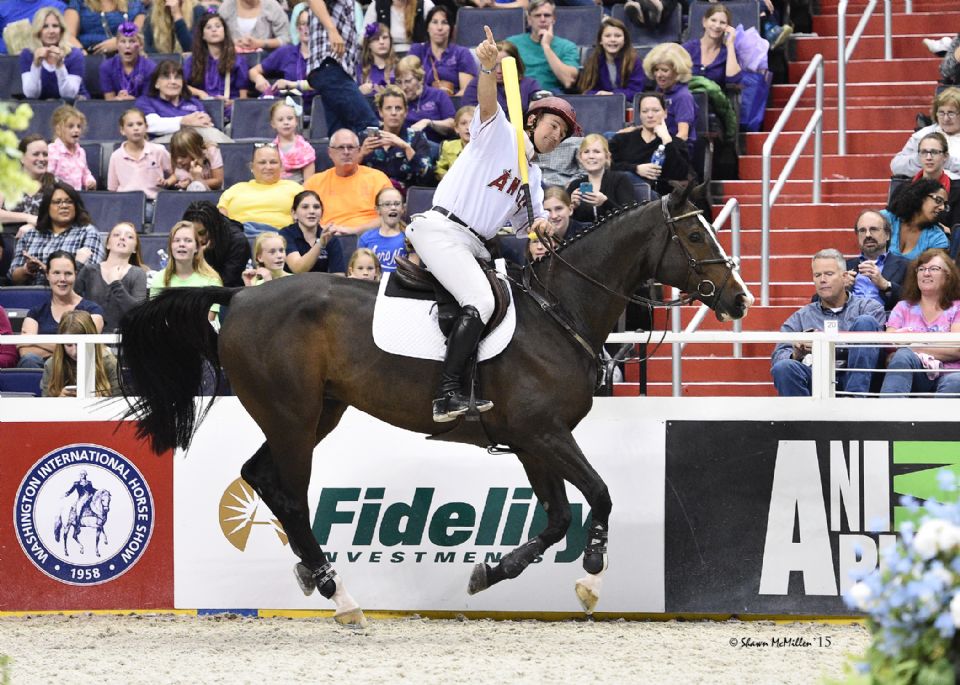 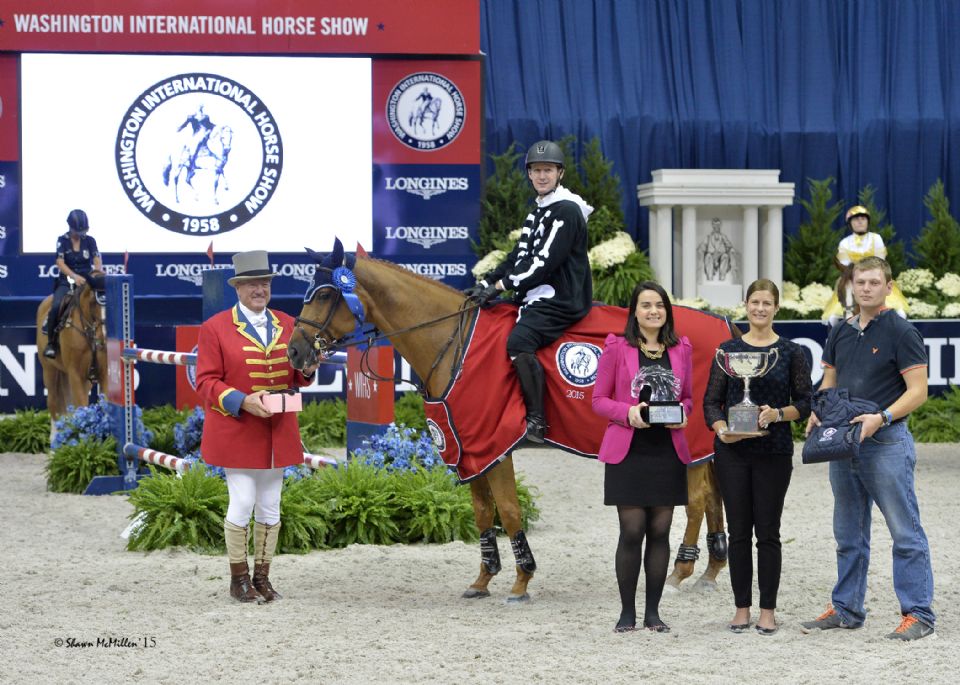 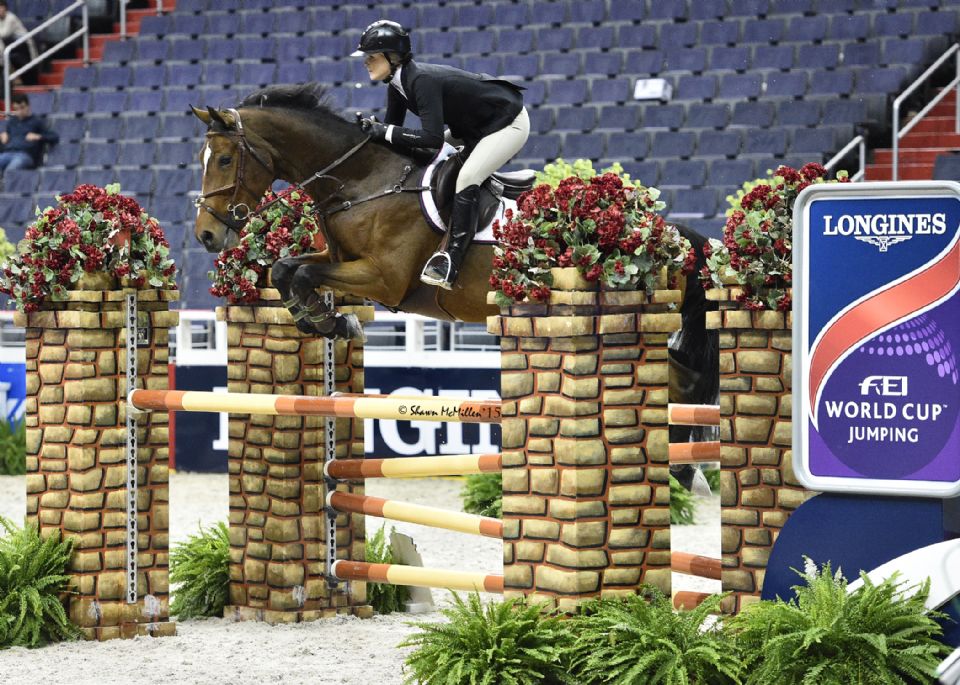 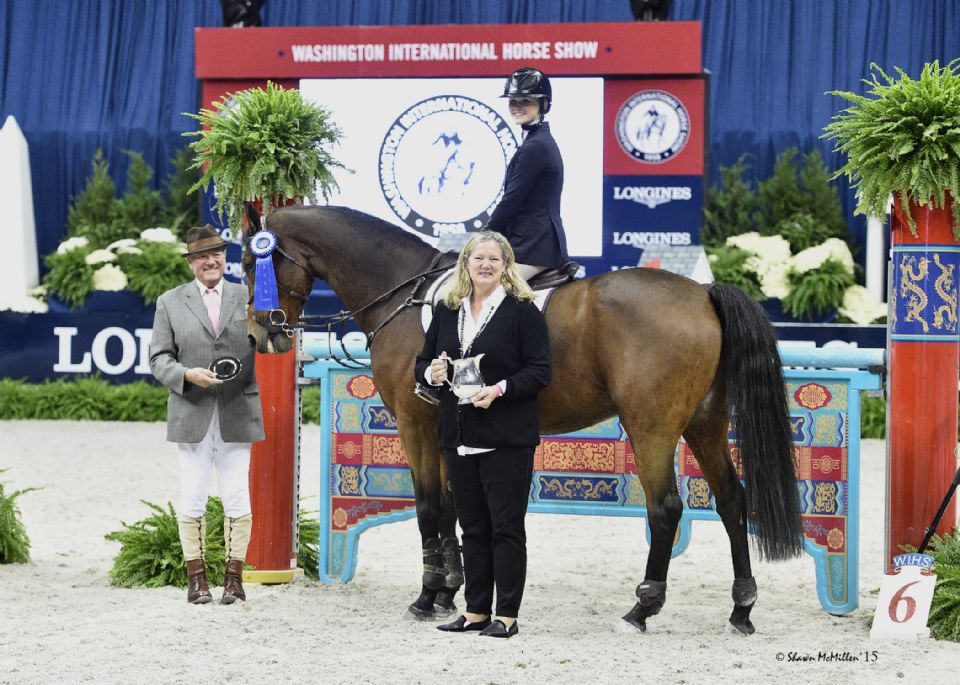 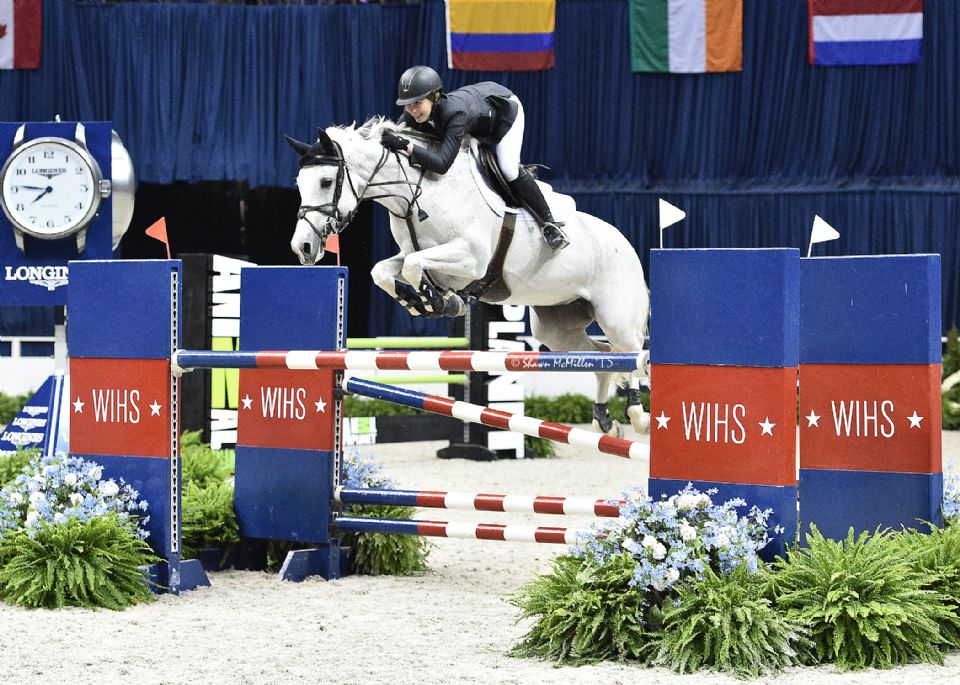 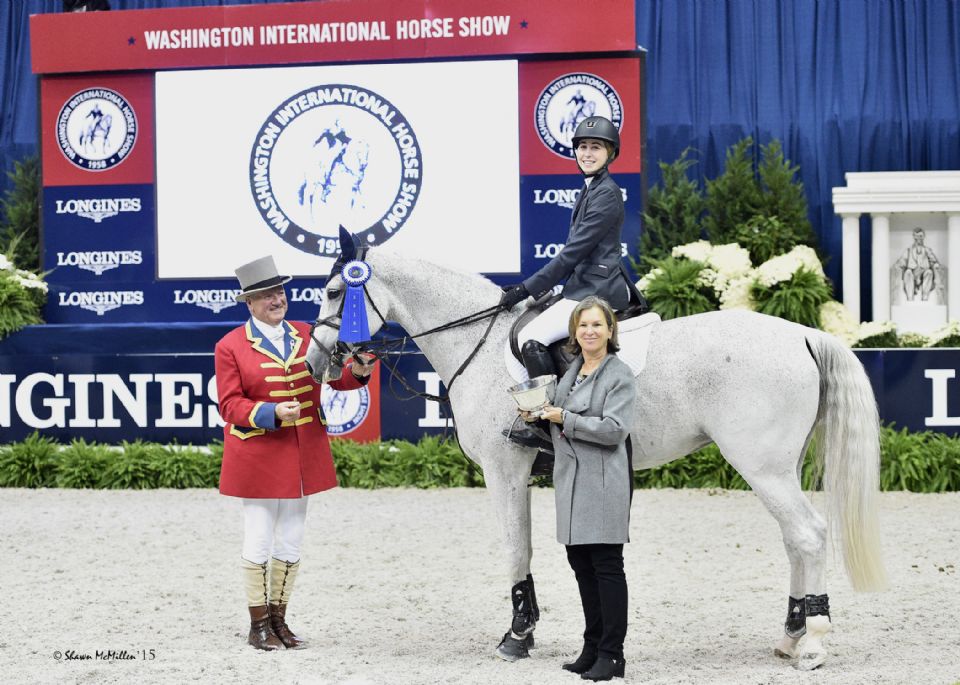 Madison Goetzmann and Wrigley in their winning presentation with ringmaster John Franzreb and Elizabeth Miller for Staysail Farm.
Photo by Shawn McMillen Photography

The Junior/Amateur-Owner Jumpers also competed Thursday with wins for Taegan Long and Pollux de Shalimar in the Low division, sponsored by The Strauss Family, and Madison Goetzmann and Wrigley in the High division, sponsored by Staysail Farm. The Junior Hunters hosted the first day of classes for their divisions in the morning and will conclude on Friday. Competition continues through Sunday, October 25, with much more exciting action throughout the weekend.

Anthony D'Ambrosio, of Red Hook, NY, is the course designer for the jumpers at WIHS this year. In the day's $35,000 Welcome Stake, D'Ambrosio saw 27 entries with 10 advancing to the jump-off and five double clear rounds. Belgium’s Jos Verlooy set the pace in 33.40 seconds aboard Axel Verlooy and Euro Horse Bvba’s Sunshine to eventually finish fourth. Georgina Bloomberg (USA) was next to clear the short course in 33.65 seconds aboard Gotham Enterprizes LLC’s Caleno 3 to place fifth. Catherine Tyree (USA) jumped the second place time of 32.86 seconds riding Mary and Joseph Tyree’s Enjoy Louis. Audrey Coulter (USA) took third place honors with a time of 32.92 seconds aboard Copernicus Stables LLC’s Domino, and Victoria Colvin completed the final clear round in the winning time of 30.40 seconds with Take the High Road LLC’s Cafino.

This is Colvin’s first year competing in the international division at WIHS and a memorable step in her young career. For the win, she was presented the Ben O'Meara Memorial Challenge Trophy, which has been hoisted by many of the greatest riders in the sport. Colvin was fearless in the jump-off, finishing over two seconds faster than her runner up. She spoke about her round, explaining that she started with a good pace, stayed tight in the turns and finally, galloped right down to the last fence, a careful vertical heading towards the in-gate. Cafino, a 12-year-old Swedish Warmblood gelding (Cardento 933 x Roderik 856), was as game as his rider as they raced to the finish.

“I like to go very fast, so I was going, I was not whoa-ing,” Colvin declared of her risk to the last jump. “He is actually really good to just gallop down to big verticals, and I knew that he would jump it well.”

Colvin is one of the busiest riders at WIHS this week since she has also been competing in the hunter divisions each day and will contest the WIHS Equitation Finals, presented by SAP, on Friday and Saturday as well. She has her sights set on competing in the $125,000 Longines FEI World Cup™ Jumping Washington, presented by Events DC, for the first time ever this weekend.

“This is the first time that I have done the international jumper division at WIHS and I love this,” Colvin smiled. “Hunters have been great; I have done that for years, but I think it has been really good to start moving forward and going on to bigger things. We also hope that Cafino will do big things. He just came back from a couple months off, so I am happy that he jumped around the 1.50m course well and now we are going to try the grand prix.”

“She's a good old girl,” Ward said of the 15-year-old Hanoverian mare (Acorado x Chasseur). “I normally don't bring her to the really big shows. I normally take her to a smaller circuit, but she always tries to jump clean rounds and she tries hard. I was actually feeling a little rusty this week and needed to get back into gear.”

Speaking of the competition, Ward noted, “I had no plan and I was struggling to come up with a course. Normally I'm okay with that. There was not just one way to do it. It was a little difficult to come up with a good course, but the horse performed well. We had fun.”

Barn Night was a huge success as some of the region’s top groups came out Thursday night to participate in special contests and enjoy the unique competition. Meadowbrook Farm was the winner of the Largest Group Overall to win a custom drape set thanks to Dover Saddlery. Summerfield Farm topped the Best Group Banner contest to take home a custom barn jump courtesy of Swan Lake Horse Shows, Clover Grove Farm had the Best Group Video to receive a customized restored golf cart courtesy of United Metro Golf Cart, and NFF Stables earned the Best Group Spirit Award to win a group clinic with top international show jumper Brianne Goutal.

The $2,500 Low Junior/Amateur-Owner Jumper speed class, sponsored by The Strauss Family, was held on Thursday afternoon with 24 entries and a wire-to-wire win for 16-year-old Taegan Long of Bedford, NJ, riding Maria Long’s Pollux de Shalimar. Long was the winner of the 2014 WIHS Children’s Jumper Championship and had the daunting task of going first in the order of her first Low Junior/Amateur-Owner competition at WIHS. She clocked an unbeatable clear round in 51.47 seconds to earn top prize and the Beagle Brook Farm Perpetual Trophy.

“This was my first time doing the Low Juniors here, and it was very nerve-wracking going in first,” Long admitted. “I knew I had to stick to the numbers and my horses would take care of me, so I was pretty confident.”

“I had a little more pressure because I was coming back from winning last year, but I knew I could do it if I just practiced hard enough,” Long continued. “This is my favorite show. The ring really works well for my horses; they both like it. Last night, my trainer (Carolyn Desfor) and I had a conversation and talked about how it is just about having fun, but obviously I want to win, so we came to win again.”

Long’s win last year was with Pocohontas, who she also jumped in Thursday’s class, but the win came with Pollux de Shalimar, a 12-year-old Dutch Warmblood gelding.

“He is pretty straightforward,” Long described. “He is a little lover in the barn. I could tell from this morning when he took off in the schooling ring that he was ready to go, and he was really good. We were both really prepared for this coming off the PA National. We had a four-fault round there and he was seventh. I knew he was not going to hit a rail, so I knew I just had to hold on and he would be good.”

“With this horse, I don’t have to think about going fast because I know that no matter what, he is going to be the fastest horse out there,” Long added. “Every time I go in the ring, the last thing Carolyn says to me is, ‘Just go clear and he will be fast for you.’ That is really my motto with both of my horses.”

The $5,000 High Junior/Amateur-Owner Jumper speed class, sponsored by Staysail Farm, was held during the evening session with a win for 15-year-old Madison Goetzmann of Skaneatles, NY, aboard her own Wrigley. The pair was awarded The “Footloose” Perpetual Trophy in remembrance of Ruth Ellen Wilmot, donated by The Curtin Family in honor of 1990 winner “Footloose.”

Out of 24 entries, only three were able to clear the course without fault. Anna Dryden and Petrushka III set the pace in 59.50 seconds to eventually finish second. Goetzmann was next to contest the track with Wrigley and clocked the winning time of 58.27 seconds. Lucy Deslauriers took third place honors with her time of 60.79 seconds riding Hamlet.

Goetzmann leased Wrigley, a 12-year-old Dutch Warmblood mare (by Padinus), from trainer John Madden during the past winter in Wellington, FL, and then purchased the mare soon after. They have been together for almost a year now.

“She is such an amazing horse,” the rider praised. “I have the privilege of having Beezie (Madden) to help me too. She always gives me excellent tips to improve things. This whole year we have been improving week by week. Two weeks ago, Zone 2 took home the gold medal at Prix de States in Harrisburg. She jumped double clear there. I am just in love with the mare.”

This was Goetzmann’s first time doing the High Junior Jumpers at WIHS. She competed in the low division two years ago and was excited to get a win at the next level.

“It is amazing to win. I think it is so amazing that we are in Washington, D.C.,” she noted. “You can walk right out and go anywhere. It is a different horse show, which I love. My horse was great. I think she loves it here.”

Goetzmann will also be competing in the WIHS Equitation Finals this weekend. Next year, she hopes to do some young rider and under 25 show jumping events throughout the season.

The Washington International Horse Show continues on Friday with the championships for the Junior Hunter divisions as well as the hunter phase of the WIHS Equitation Finals, presented by SAP. The Low and High Junior/Amateur-Owner Jumpers will have jump-off classes in the afternoon session. The evening session begins with a $50,000 International Jumper Speed Final, presented by Rushy Marsh Farm and AAA Equestrian, followed by the $25,000 Boeing Company International Jumper Puissance.

For those who cannot make it to the show, competition will be live streamed in its entirety at www.wihs.org, and is also available on USEF Network at www.usefnetwork.com.