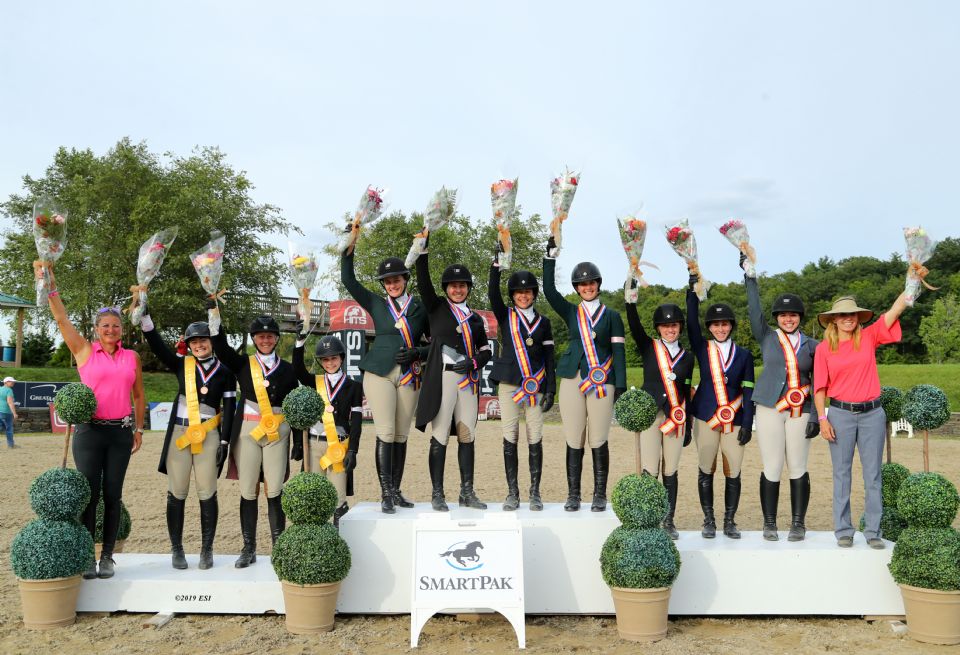 Top-three teams in the Zone 1 and 2 Children’s and Adult Amateur Hunter Championships, presented by SmartPak.
Photo by ESI Photography

Riders were divided into four teams and competed in three phases: an under saddle and two classic hunter-style rounds judged by two panels of judges (Jimmy Lee, Laura O’Connor, Brian Lenehan, and John Berkos). Each team had an assigned color with riders wearing armbands representing their team. Many also exhibited team spirit and camaraderie with braided manes and tails done in team colors. Each phase was placed and awarded individually, and the teams with the highest overall scores were crowned gold, silver and bronze medalists.

Team Pink Chef d’Équipe Elizabeth Perry-Merbler of Pittstown, N.J., on her first experience serving as a team coach: “One of my clients qualified and thought I would be a great candidate for a Chef. I was picked and I am so thrilled to be here. I agree with so many of the riders in that I love the team spirit and camaraderie. It’s a really special experience because you rarely get that in this sport. This is another feather I can add to my cap and I’m really excited to be a part of it.

Emily Weis on her mount Celebration and their win in the first over-fences phase: “This is my second year competing in these championships. [Celebration] loves this ring and I have actually been practicing for this big, open space by fox hunting. You can really pick up a gallop and go in [the grand prix ring]. He was great today. He is a former college horse at SUNY Morrisville, and I just purchased him after leasing him last year.”

Linda Corvari on her first time competing in a team format championship: “I appreciate the opportunity to have a team and compete in this format. I spoke to my trainer a few years ago about what an individual sport this is and how I wanted to be able to have an opportunity to ride on a team. Just a few years later and it has evolved into this.”
All riders received polo shirts and tote bags from the Championships' presenting sponsor SmartPak. Medals and ribbons were awarded to the top three teams and the gold medal team receiving embroidered coolers.

The USHJA extends special thanks to the HITS Saugerties team. The USHJA also thanks presenting sponsor SmartPak for their generosity and support of the sport.