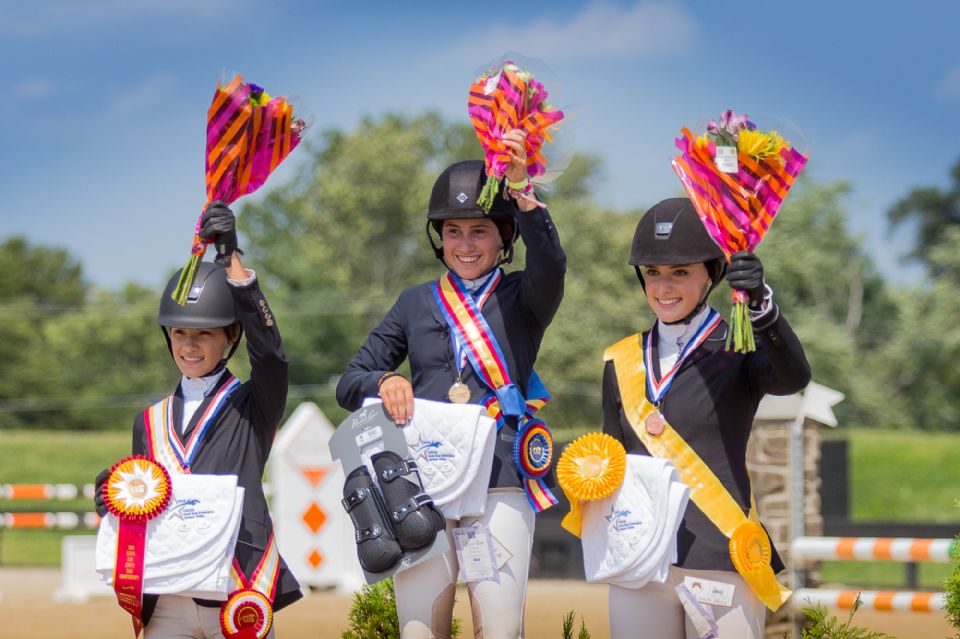 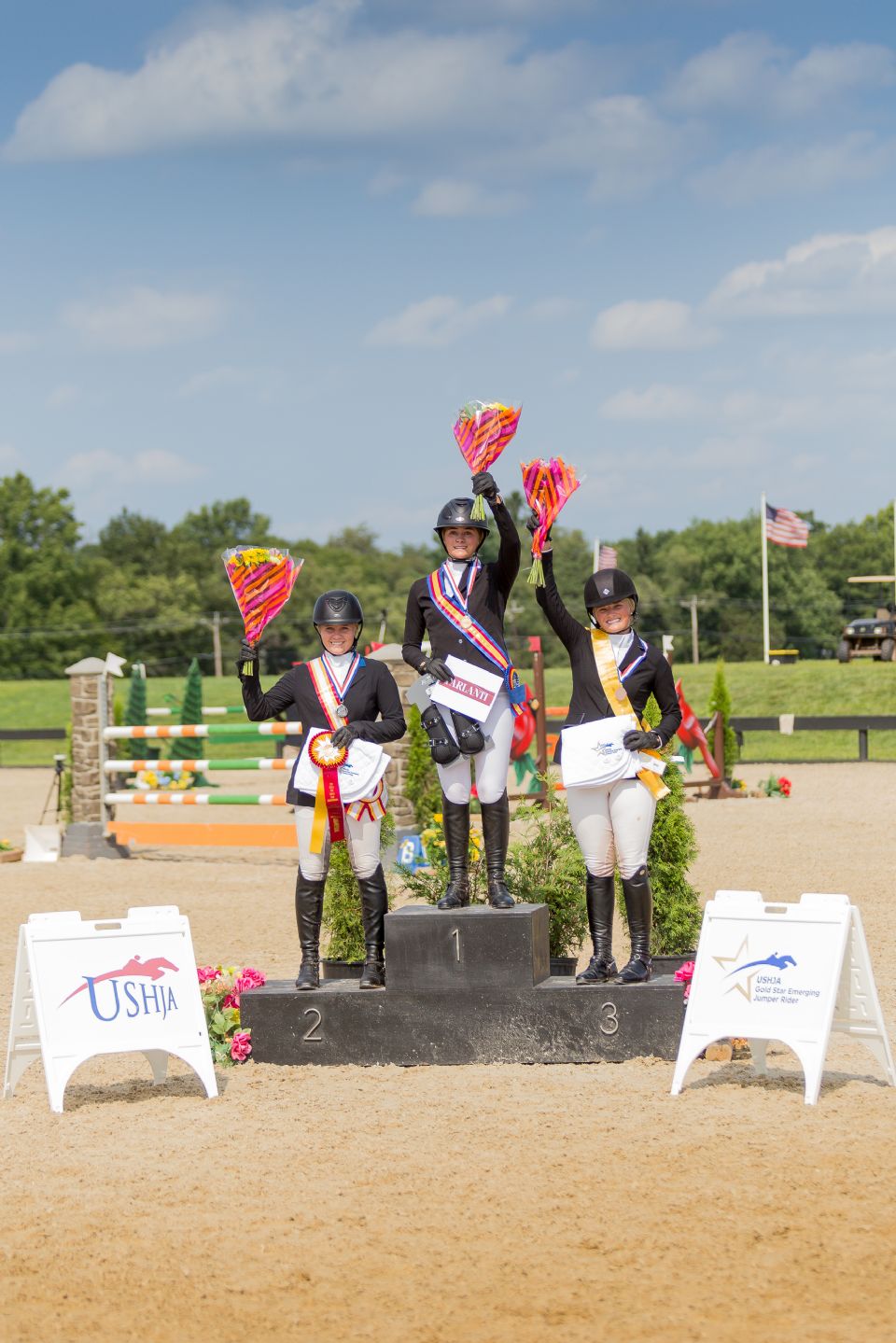 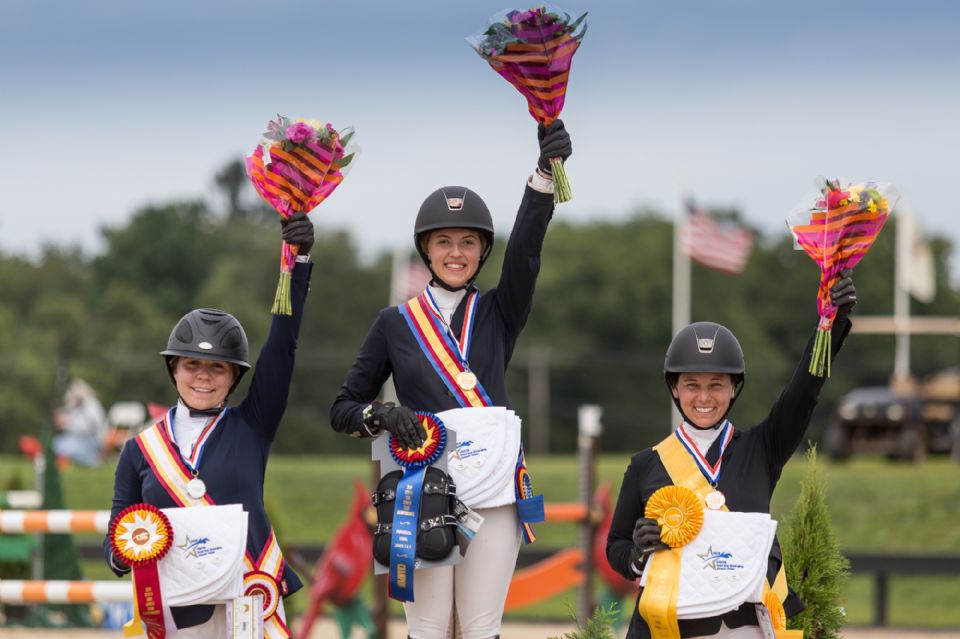 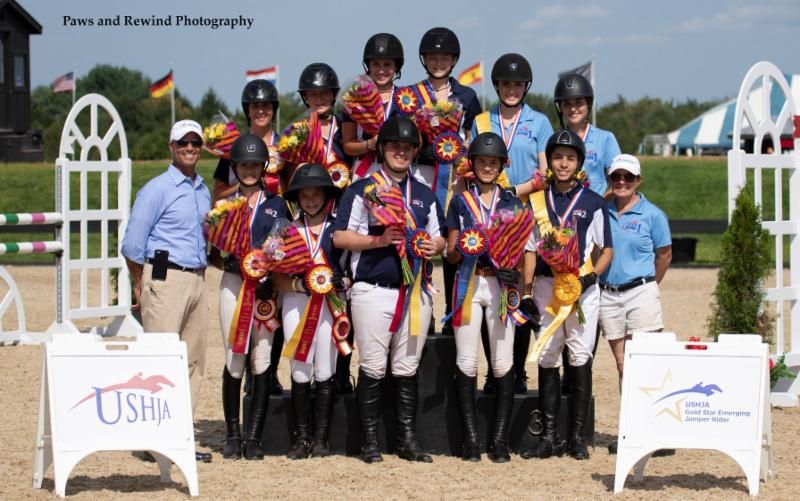 Children's teams from Zones 1 & 2 earned spots on the podium.
Photo by Paws and Rewind Photography 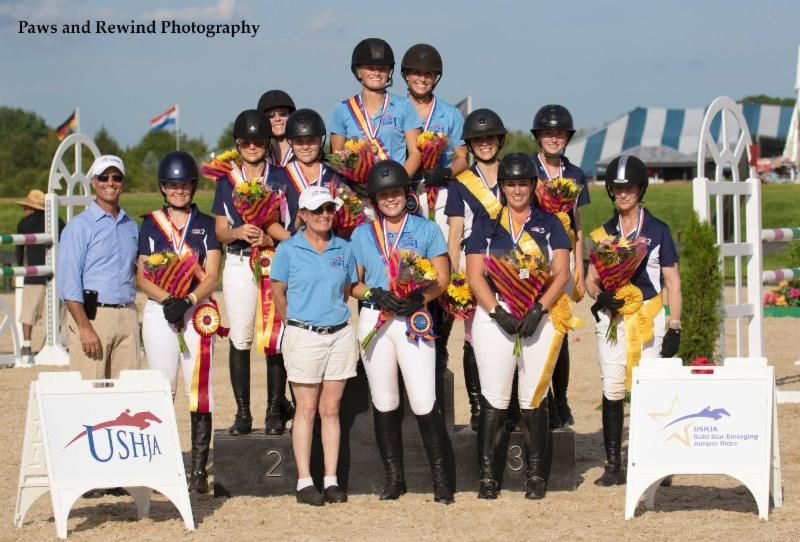 Adult Amateur teams from Zones 1 & 2 earned spots on the podium.
Photo by Paws and Rewind Photography 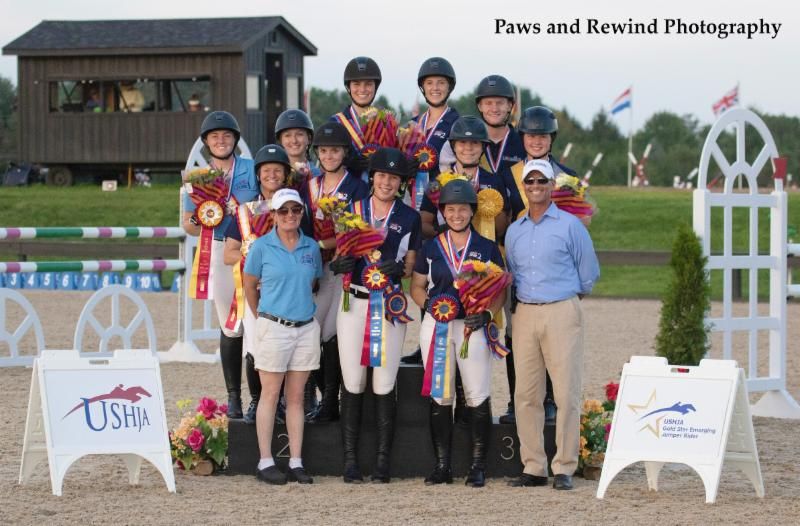 Teams from Zones 1 and 2 earned spots on the podium.
Photo by Paws and Rewind Photography

Fourteen-year-old Claudia Citrin (Bedford Hills, N.Y.) stormed to victory in the Children's 1.10m/1.15m section riding her won Don Juan. Citrin won the first qualifier earlier in the week and did not touch a single rail throughout the rest of the championships to finish atop the podium just fractions of a second ahead of the silver medal finisher, Dakota Champey.

Citrin just became the owner of Don Juan after leasing the Dutch Warmblood gelding for six months, saying, "I call him Donald, and you wouldn't think he would be a fast horse, but he is!

"I was pretty nervous," continued Citrin of her first time participating in the Zone Jumper Team Championships. "But, my horse is also very trustworthy, so he really saved me after a mistake at the first jump in round one yesterday. After that, we made our way around, and I am thankful for him and very happy about our gold medal."

Citrin's next goal is to qualify for indoor competition in the fall before participating in her first-ever clinic experience at one of the Gold Star Clinics.

Behind Citrin, Champey (Far Hills, N.J.) was just under four-tenths of a second off the winning time to earn the silver medal riding Escape, owned by MDHT Equestrian, LLC, while Cecilia Van Paasschen (Greenwich, Conn.) piloted her own Hocus Pocus to the bronze medal. Both Champey and Van Paasschen were also fault-free after four rounds of jumping. Their times from the first day in the Individual Qualifer were what set each of them apart on the podium.

Adult Amateur riders also boasted perfect scores with the three medalists earning zero faults throughout the championships. Like their Children's counterparts, the First Individual Qualifier times determined their spots on the podium. Darian Smith (Villanova, Pa.), 19, won the opening qualifier and left all the rails up over the following three rounds to claim the gold medal in the Adult Amateur 1.10m/1.15m section. She piloted her own Aymar De La Rose.

Her Selle Français gelding underwent a career change in 2016 and has found his niche, according to Smith.

"I got him in 2015 as a 3' hunter, but we switched to jumpers after a year and have been doing that ever since," said Smith, who participated in the Zone Jumper Team Championships for the first time this year. "He's my soul horse, and I have been working really hard for this all year. I started crying immediately when I realized we had won.

"It's really an honor to be invited to a Gold Star Clinic," continued Smith. "I am excited for the opportunity to be able to participate and learn some invaluable lessons that you can't get anywhere else."

At just 16-years-old, Morgan Champey (Far Hills, N.J.) piloted her own Baronesse to a fast clear round in the Junior/Amateur 1.20m/1.25m and 1.30m/1.35m section on the final day of competition to finish on a total of eight faults and take individual gold.

"I don't think I have ever been this happy after a horse show," said Champey, who rounded out the trio of gold medalist who had never participated in the Zone Team Championships before. "After yesterday when I had a clear round for the team championship, I couldn't stop smiling and then today after I was clear again it was an amazing feeling."

"My horse can be a sassy diva, but she is also like a dirt bike and really fast," said Champey of the mare she has had the ride on for four years. "She tries her hardest every time and I am really proud that she stepped up to get clear rounds when we really needed them."

Cameron Tague (Cream Ridge, N.J.) stepped on the silver platform after finishing a rail behind Champey aboard her own Gentlleman VHM, while amateur Stephanie Dixon (Ringoes, N.J.) scored the bronze medal riding her own Valenzia.

Riders and trainers who receive the Gold Star designation are invited to attend one of the Gold Star Clinics, which will be held on the East Coast at the Jim Brandon Equestrian Center in West Palm Beach, Florida, Dec. 26-30, 2018, on the West Coast at the HITS Desert Horse Park in Thermal, Calif., Jan. 16-20, 2019, and new this year, a centrally located Gold Star Clinic at the World Equestrian Center in Wilmington, Ohio, April 16-20, 2019.

Zones 1 and 2 Battle for Team Championships

Comradery was at a peak on Saturday, August 25, when teams competed for overall medal position over two rounds under Nations' Cup format.

In his seventh year as Zone 2 Chef d'Equipe at the Jumper Team Championships, James Benedetto noted, "I think this program is exceptional and a great building block for these riders to reach the top. I get to see riders year after year continue to step up and excel in the higher divisions.

"The pressure was on Zone 2 today, but this is a strong group of riders that work well together, so I am really happy," he continued. "Andrew [Philbrick] and his team at Princeton Show Jumping do an excellent job hosting this event; the footing was great and Bernardo did a wonderful job with the courses. The horses jumped well, and it was great sport."

"They all rode perfectly!" said Kristi Smith, Zone 1 Chef d'Equipe. "No one made a mistake over three rounds, and I was very lucky to have three really good riders. They made me look good!

"This championship is a really fun experience for these child and adult riders, but it also puts a little pressure on them," continued Smith, who returned to serve as Chef d'Equipe this year after making her debut at the championships. "Showing as part of a team is not something they get to do a lot, but it is really valuable for them. I am so proud of Zone 1 today."

In the 1.20/1.25m and 1.30/1.35m Junior/Amateur section, Zone 2 returned to the top of the podium with Morgan Champey, Stephanie Dixon, Samantha Johnson, and Jillian Rosenwasser accepting the gold medal. The silver medal went to a combined team, including Haley Cassidy (Zone 1), Kathleen Full-Baudeneau (Zone 2), Sydney Smith (Zone 1), and Sarah Wood (Zone 2), while Zone 2 rounded out the podium with Devon Shaw, Cameron Tague, and Jake Parker Wymard in the bronze medal position.

USHJA extends special thanks to Andrew Philbrick and the entire Princeton Show Jumping team for hosting these Championships. USHJA also thanks  Zone 1 Chef d'Equipe Kristi Smith and Zone 2 Chef James Benedetto, who led the teams at the Championships.