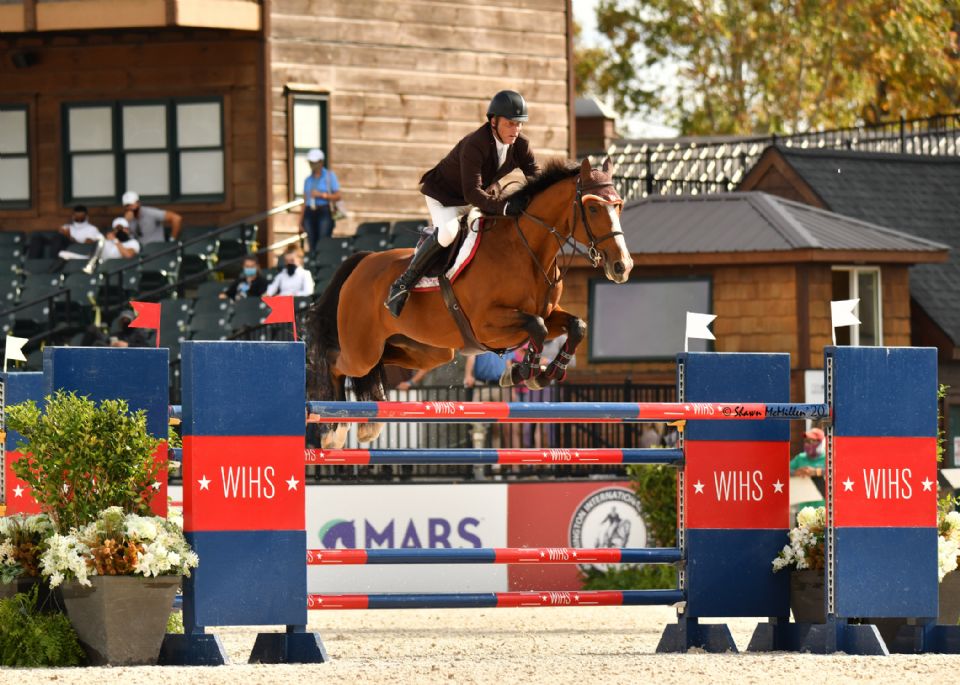 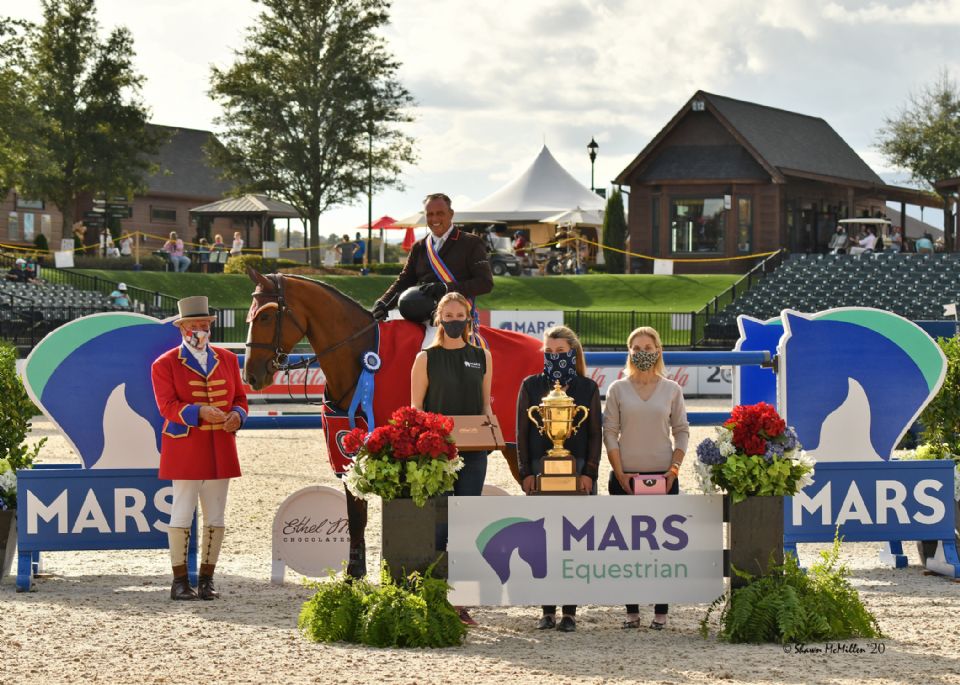 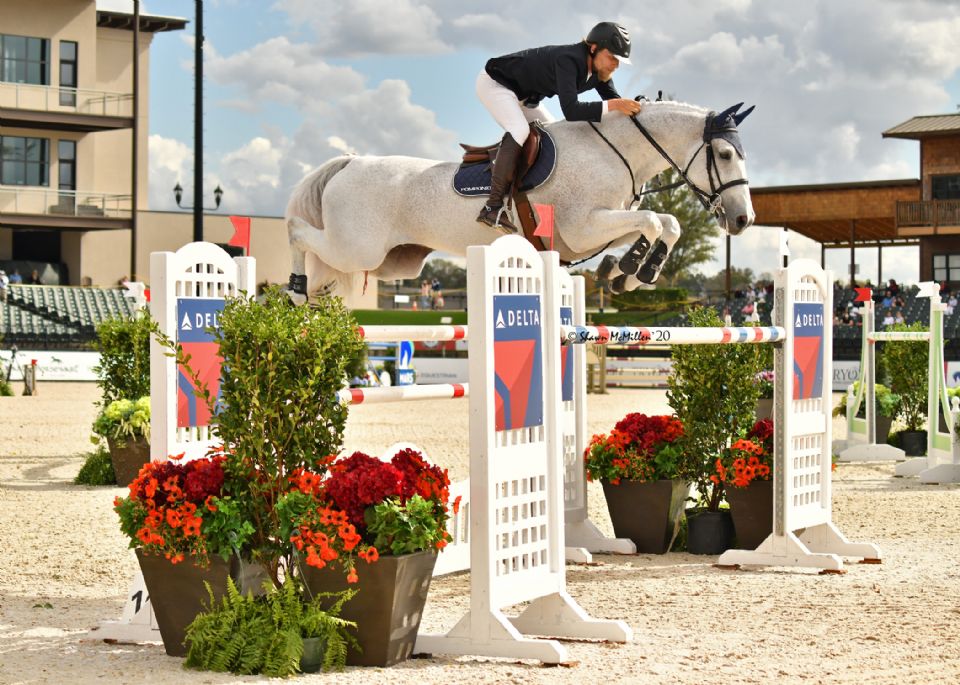 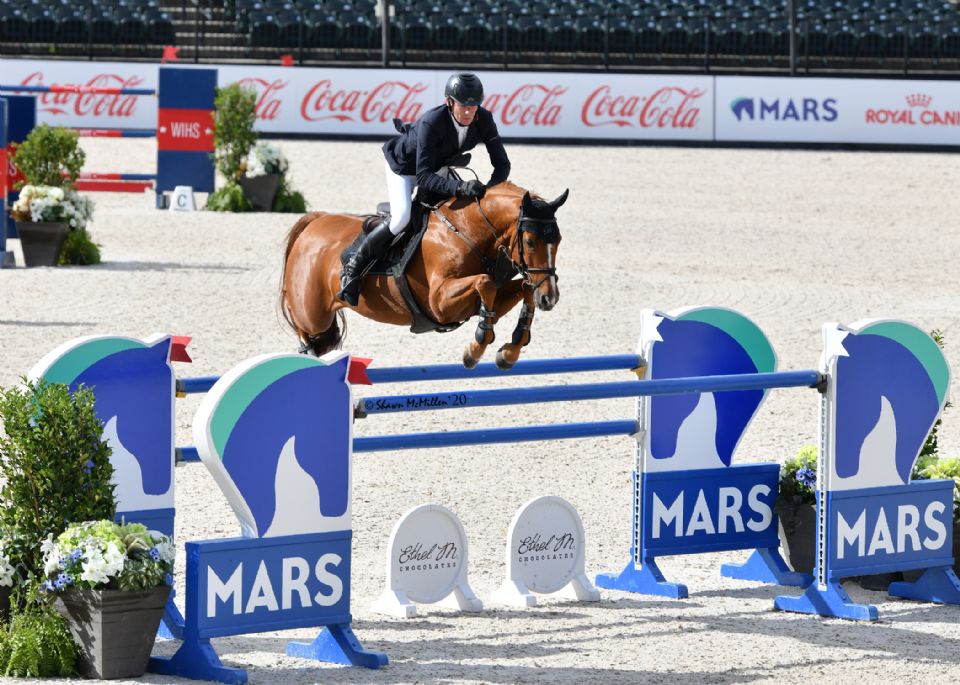 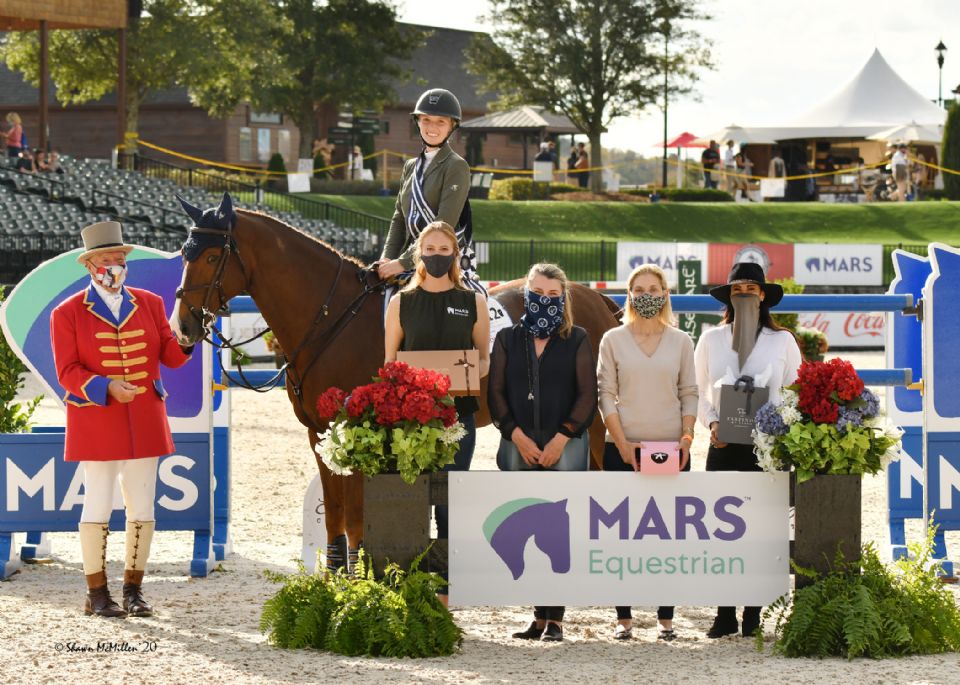 Tied for third on Fasther, Lillie Keenan also won the Leading Lady Award presented by Fab Finds by Sarah and the U25 International Rider Award sponsored by Katherine Kaneb and Family.
Photo by Shawn McMillen Photography 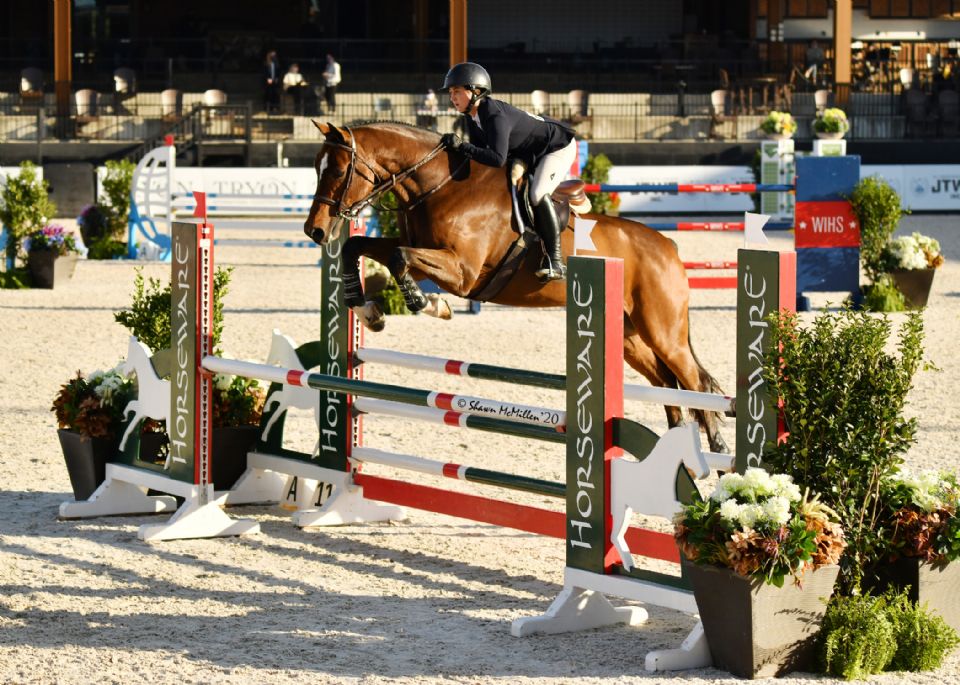 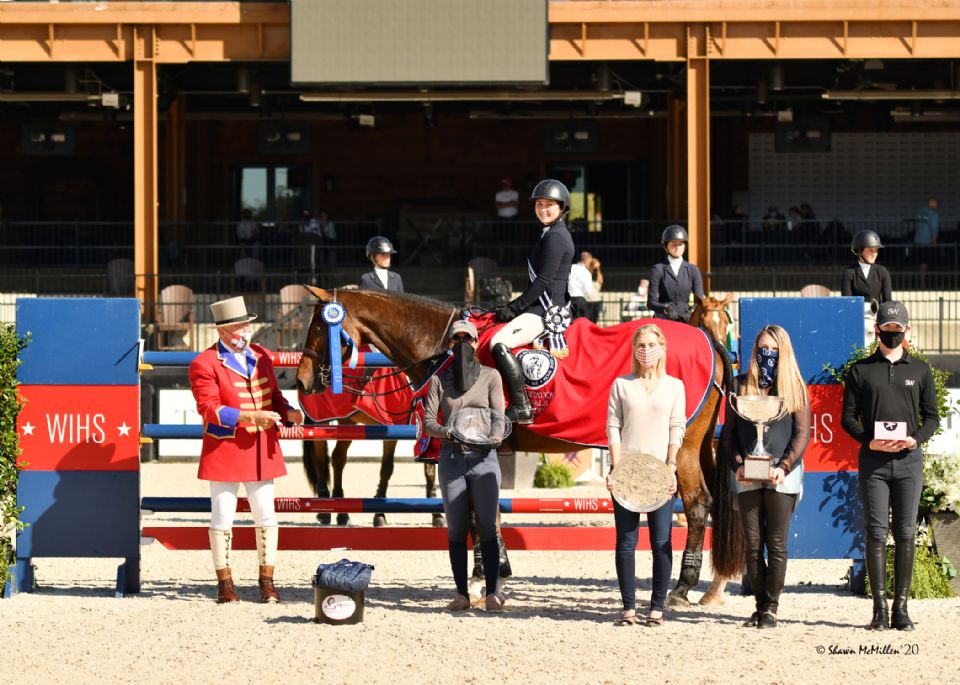 Minikus first won the President’s Cup in 1990 aboard Thrilling, that he owned with Michele M. Masso, and then took the title again in 2009 riding Alaska owned by Callie Seaman. His third victory puts him among a talented few who have their name listed on the prestigious trophy more than twice, including Rodney Jenkins, Beezie Madden, and McLain Ward.

“The Washington International [Horse Show] has been so important to my career,” said Minikus, who hails from Loxahatchee, FL. “The first time I won it, it put me on the map and it has always meant so much to me. This year has been obviously a little bit of a different situation with everything going on in the world as well as show jumping. We were shut down for quite a while and Tryon was one of the first facilities to open up and they did a fabulous job of taking on the WIHS President’s Cup.

“Sometimes you kind of feel like, ‘Here we go, another class,’ but when they mention the President’s Cup – because it has such a history and is such a prestigious event in American show jumping – it is just as meaningful as it was 30 years ago,” continued Minikus.

The list of 50 competitors on the original order read like a who’s who of international show jumping with 15 advancing to the Anthony D’Ambrosio (USA) designed jump-off. The short course was a race to the finish, but none could top Minikus and his 11-year-old Zangersheide mare owned by Bit by Bit Group.

“When I was in the schooling area and I saw Karl Cook’s horse, who was just unbelievable last week, and Beat Mändli, who the week before rode one of the fanciest jump-offs I’ve ever seen in my life, and Lillie Keenan’s fast chestnut, I thought, ‘Wow this is a crazy jump-off.’”

“The only place I could really let Caillou’s strength – his stride – come up was from [fence] two to three,” said Cook of his debut in the WIHS President’s Cup Grand Prix. “I just tried to do the best that I could in the turns, and I think Todd got me at the second to last [fence], where I had to add. Second’s pretty darn good. I’m happy with that.”

Of his winning ride, Minikus said, “Amex has really come on strong this year. I got to go a little late in the order, but I heard them announcing ‘a little bit faster, a new leader, a new leader.’ When you start hearing that, you know they are turning up the heat. I got lucky that I nailed the first jump in perfect stride, and the second fence came up perfect. I took a chance to the second to last and chased the seven strides to the last jump. Sometimes it works out!”

For his victory, Minikus was presented with The President of the United States Perpetual Cup, donated by Mrs. Jacqueline Kennedy in 1961.

“That was world-class show jumping at its best,” continued Minikus. “It was truly the best show jumping in the world. I’d like to thank MARS Equestrian™ and their sponsorship for supporting out sport and I sure hope they continue – that was really fun out there today.”

“Galan S is the sweetest horse I have ever sat on,” said Mändli, of the 14-year-old Belgian Warmblood gelding (Indoctro x Calypso d'Herbiers). “He is like a little kid, and he tries to please you in everything that he does. He is a fantastic horse. It’s my first time here in Tryon and it worked out very well.”

In addition to her podium finish, Keenan also took home the Leading Lady Award presented by Fab Finds by Sarah and the U25 International Rider Award sponsored by Katherine Kaneb and Family.

“Fasther is probably the most talented horse I have ever had the pleasure to ride, and I’m extra lucky because he’s mine,” said Keenan, of her 10-year-old Dutch Warmblood gelding (Vigo d’Arsouilles x Farmer). “When I got him, I knew he had all the talent in the world, but the rideability was a bit of a struggle. We worked a lot on the flat and I know that as long as I do my job well, he will pull it out of the bag. I am over the moon to be here and to be sitting with this group of riders, and thrilled to be leading lady. I think any event that supports women in sport is admirable, and I am really privileged to be here. Hopefully, I can help prove that women are just as good, if not better than men, in our sport.”

There was no stopping 15-year-old Tessa Brown of Jamaica, VT, who scored big in the prestigious WIHS Equitation Finals riding Davide, a 12-year-old gelding owned by Equipearl, LLC.

A field of 40 started the competitive equitation final, which spanned two days. Riders started with a hunter phase held on Friday, then completed a jumper phase held on Saturday afternoon, and then 10 riders qualified for a final work-off. Riders’ average scores from the first two rounds were combined, with the 10 top-ranked competitors then swapping horses in the work-off. The highest combined total score won the class.

The added pressure of a coveted year-end final was no problem for Brown, who took seventh in the hunter phase with a score of 86 before posting an 89.75 in the jumper phase. She again impressed the judges, Erynn Ballard, Robin Rost-Brown, Nicole Shahinian-Simpson, and Jimmy Torano, with a score of 91.5 in the work-off. Finishing in second was Sophee Steckbeck of Clarksburg, NJ.

“Last year was my first year [at WIHS], and sadly, because of the unprecedented times, we are not in Washington D.C., but I have to say everybody involved has done an incredible job at keeping the prestige and excitement, and I think that helped the riders and horses feel the importance of this class,” said Brown, who is a junior at Watkinson School in Hartford, CT. “Going into yesterday, I rode for Davide, for the Rosemont team, and everything they have helped me accomplish. I love that I am here doing it on the horse of a lifetime.”

Brown has trained with Kyla Makhloghi of Rosemont Farm since age eight. “I’m feeling unbelievably proud,” said Makhloghi. “The reason today was able to go as it did is because Tess and I have prepared like every day, every practice, every class, every show matters. So, when it comes down to a pressure situation, it feels familiar because that’s how we train. It’s easy to get bogged down in scores, points, and qualifying, but at the end of the day sustained success is only possible through sustained practice, and today is a testament to that.”

“When Kyla and I were talking about how we could get into the work-off, I said, ‘I want to ride Cent 15, he seems like so much fun,’” recalled Brown. “I went in like it was another chance of a lifetime on an amazing horse.”

After her win, Brown complimented the WIHS Equitation Finals runner-up saying, “Sophee [Steckbeck] is an amazing rider, she deserved that as much as I did and she rode amazing. When they called me to be first, it really felt like all of this hard work, all of these hours, all the sweat, all the tears, all the excitement of what comes along with being an equestrian came together. It was emotional because I am just so proud of us. It’s a big deal, and I’m really happy.”

Steckbeck piloted Zapfier, a 16-year-old Dutch Warmblood gelding owned by Missy Clark, to consistent scores of 87.5 in the hunter phase and 88.75 in the jumper phase. For the work-off, she drew Charisma, the 13-year-old gelding owned by Heritage Farm, and scored an 89.5 to finish second.

“This is the first year that I’ve been up in the rankings, and I am very happy with the results,” said Steckbeck, 17, of her third and final year in WIHS Equitation Finals. “Going into the work-off, you get a different kind of nerves because anything could happen. I was happy to be on Zayna Rizvi’s horse. She’s a barn-mate of mine, and I’ve watched that horse go for a long time and I think he’s the coolest horse. Finally getting to ride him was amazing. He felt great in the work-off.”

Steckbeck, who trains with John Brennan, Missy Clark, and Brian Feigus, is a Senior at Notre Dame High School in Lawrenceville, NJ, and is committed to attend Auburn University and ride for its equestrian team next year.

Finishing in third on a final combined tally of 267.25 was Ellie Ferrigno, 18, of Newtown, CT, riding FRH Remarkable, an 11-year-old Oldenburg gelding owned by FRH Group. Ferrigno is trained by Valerie Renihan of Findlay’s Ridge based in Wellington, FL.