The Washington International Horse Show Shetland Pony Steeplechase Championship Series, presented by Charles Owen, kicks off at the Devon Horse Show in Devon, Pa., on May 29 and 30. 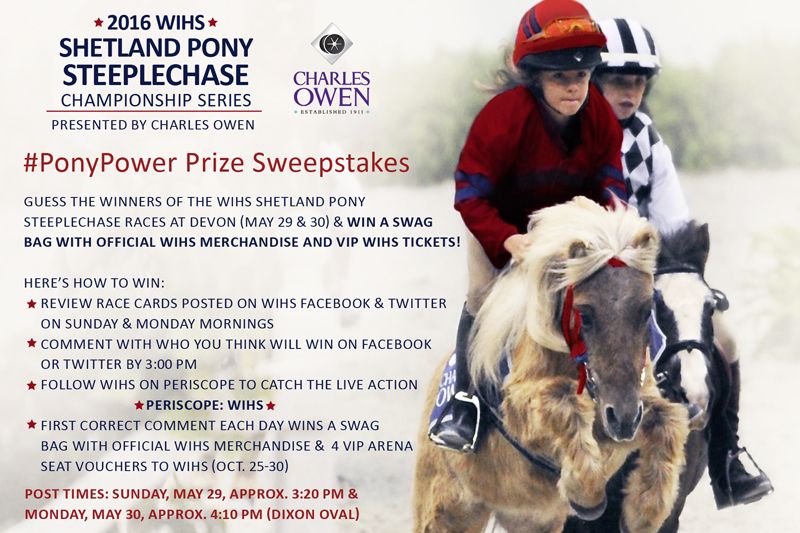 WIHS #PonyPower Kicks Off in May at the Devon Horse Show

The Washington International Horse Show’s wildly popular Shetland Pony Steeplechase Championship Series, presented by Charles Owen, will be held in May and October 2016, commencing Memorial Day weekend at the Devon Horse Show.  The high octane sport features junior jockeys in the saddle racing the cutest, fluffiest Shetland Ponies to the enjoyment of spectators of all ages.

The first stop in the series is the historic Devon Horse Show and Country Fair in Devon, Pa., on Sunday, May 29 and Monday, May 30, and it concludes in the fall with the finals at the Washington International Horse Show on WIHS Barn Night, Thursday, October 27, and Grand Prix Night, Saturday, October 29, at Verizon Center in Washington, D.C.

Introduced in 2013, the WIHS Shetland Pony Steeplechase races, dubbed "D.C.'s newest--and cutest--sport" by the Washington Post, are run like professional racing events with a bugler, race caller and photo finish, but in miniature. The jockeys are youngsters from ages seven to 14 mounted on traditional Shetland Ponies racing over a course of mini-hurdles.

"We've had an overwhelming response to the WIHS Shetland Pony Steeplechase Series from our fans," said WIHS President Victoria Lowell. "Not only is it really exciting to watch, pony racing is also a great way for kids to get into equestrian sports. Not too many people know that Kent Farrington, currently ranked #6 in the world in show jumping and a frequent competitor at Washington, used to race ponies."

For those unable to attend in person, the races at Devon and Verizon Center will be streamed live by USEF Network at usefnetwork.com, and archived on WIHS.org. Fans can also follow WIHS on Periscope (@WIHS) for exclusive behind-the-scenes and live race action.

An exciting social media contest will have race fans studying the race card for each pony’s winning form. The #PonyPower Prize Sweepstakes will take place May 29 and 30 in conjunction with the races at Devon. Fans can enter to win a Swag Bag of official WIHS merchandise including VIP tickets to the 58th Annual Washington International Horse Show, October 25-30 at Verizon Center. Entry details are available below.

"Our partners at USPR work closely with the children and ponies to ensure they are fully prepared for a safe, fun and exciting race day," said Bridget Love Meehan, WIHS Executive Director. "We love including sports across equestrian disciplines at WIHS, especially those like pony racing that are such fun to watch."

"Charles Owen is delighted to continue its support of the WIHS Shetland Pony Steeplechase Championship Series," said Roy Burek, Managing Director of Charles Owen. "With our long association with pony racing in the U.K., we're especially excited to be a part of its growth in the U.S. The WIHS Series at Devon and Washington offer an ideal showcase and we encourage everyone to come out and experience it."

About the Washington International Horse Show (wihs.org)
Established in 1958, the Washington International Horse Show is one of the oldest and most prestigious equestrian sporting events in North America. More than 26,000 spectators attend the six-day show, which includes Olympic-level competition along with community and charity events. More than 500 top horses and riders come to D.C. from all over the globe to jump for more than a half a million dollars in prize money. Highlights include the $130,000 Longines FEI World Cup™ Jumping Washington, the President's Cup Grand Prix, presented by Events DC, (Saturday night), The Boeing Company Puissance high jump competition on Military Night (Friday) and Kids' Day (Saturday), a free, fun and educational community event. The Washington International Horse Show Association, Ltd. is a 501(c)(3) nonprofit charitable organization headquartered in Washington, D.C. WIHS is an official USEF Heritage Competition and is currently ranked #7 in the Top 25 Horse Shows by the North American Riders Group. WIHS is rated CSI4*-W by the Fédération Equestre Internationale, the world governing body for horse sports.