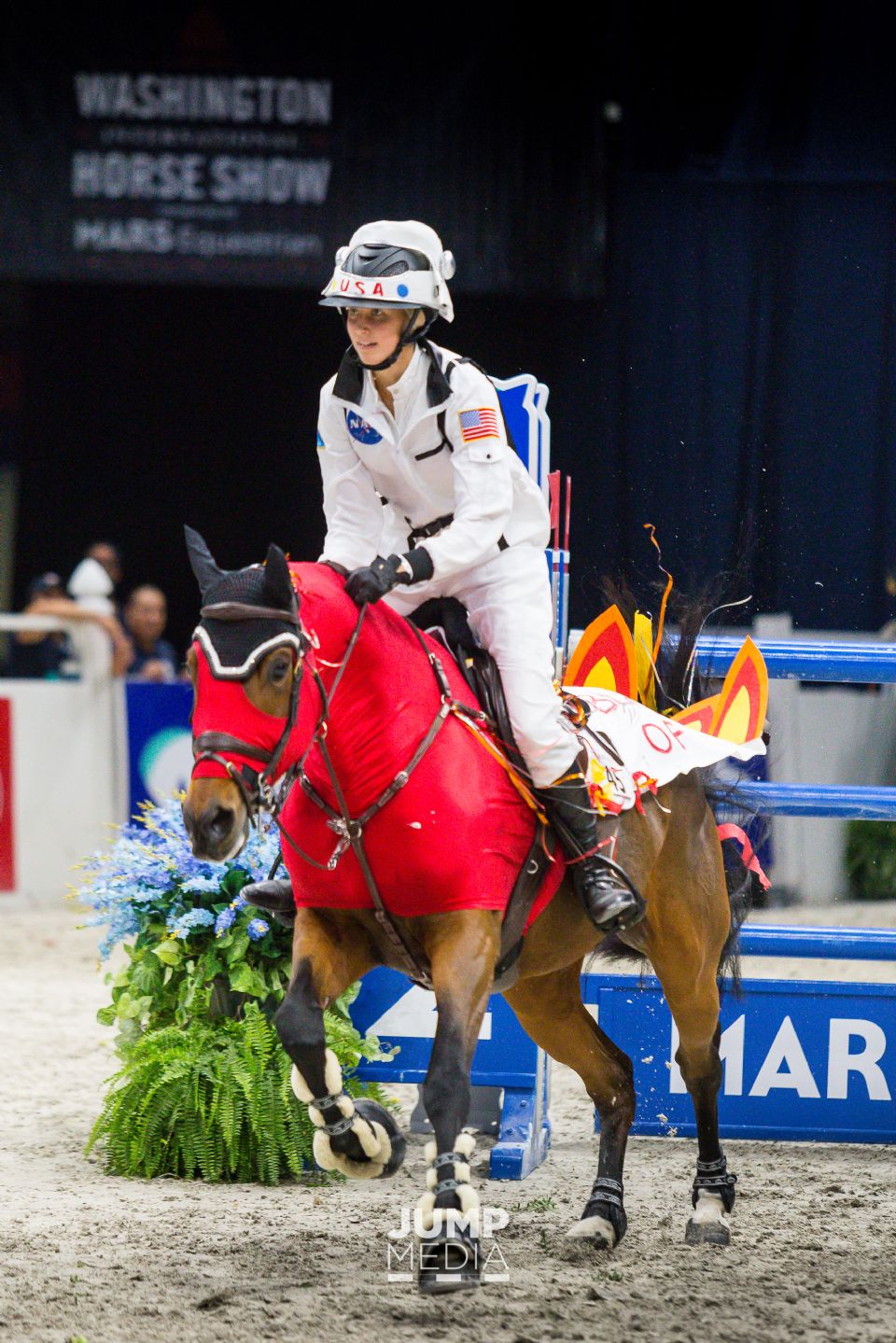 Natalie Dean (USA) and Ceitas joined in on the fun at WIHS 2019.
Photo by Jump Media 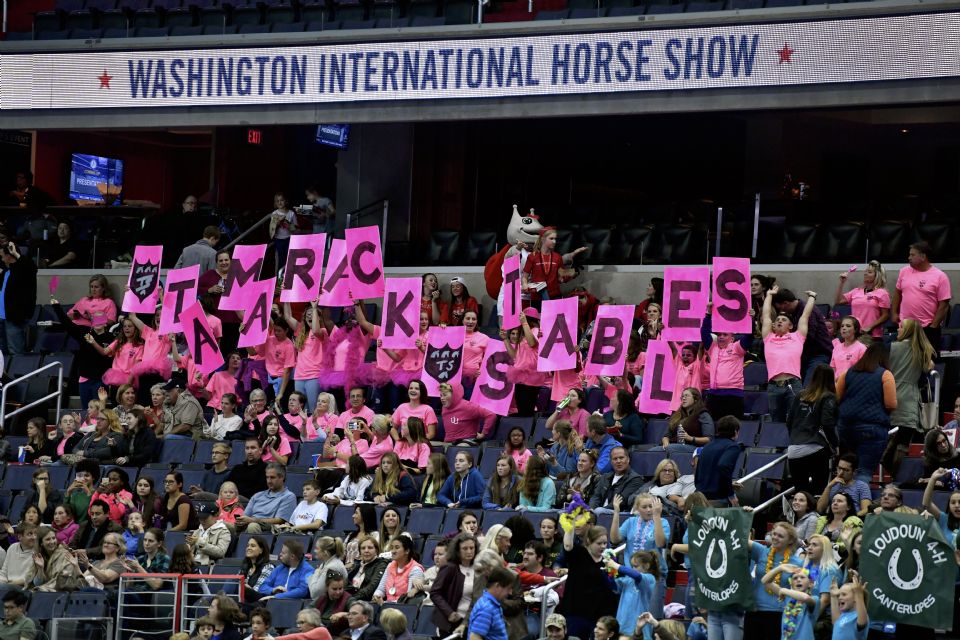 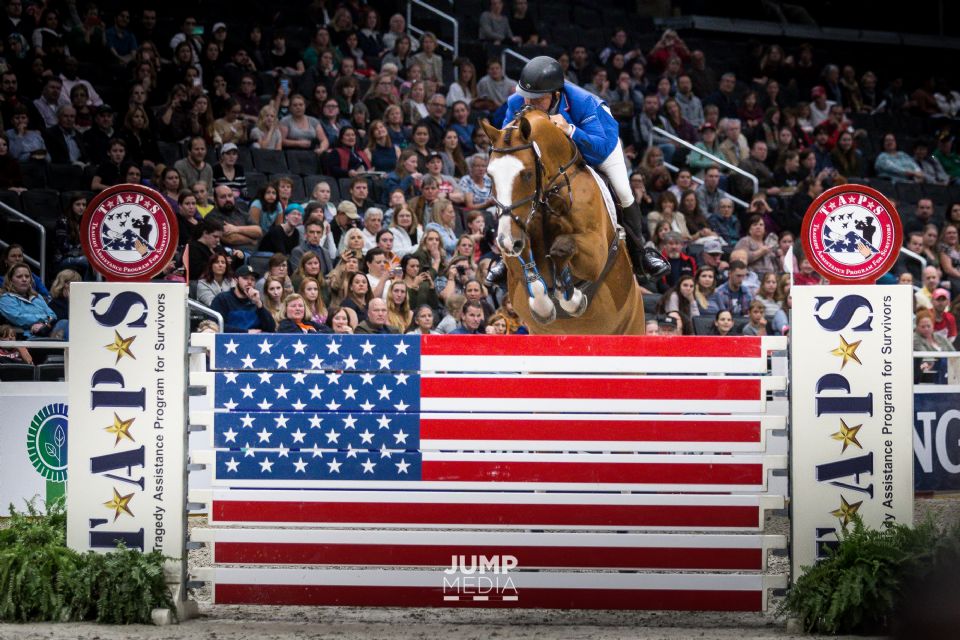 Aaron Vale (USA) and Major fly over the “Jump for TAPS” American flag fence at WIHS 2019.
Photo by Jump Media 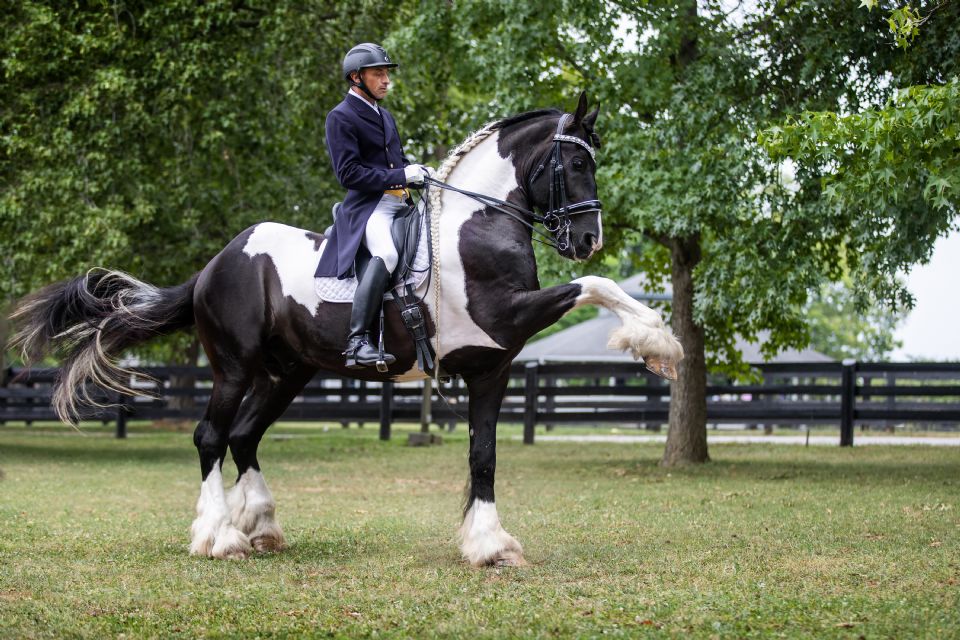 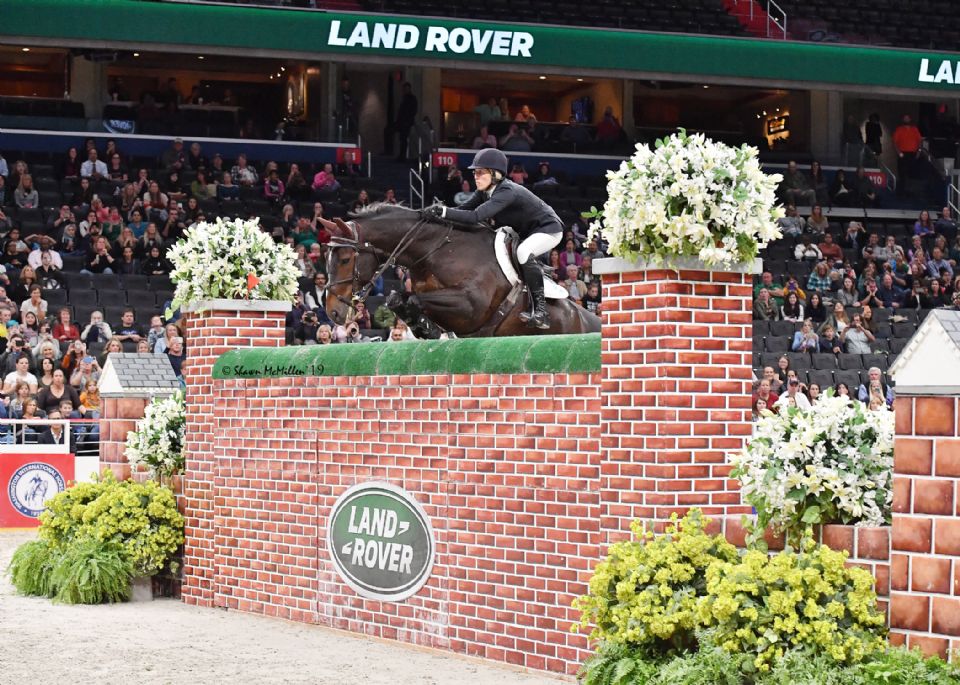 Schuyler Riley and Very Chic Du Tillard jump 6'9” to tie for the Puissance win in 2019.
Photo by Shawn McMillen Photography 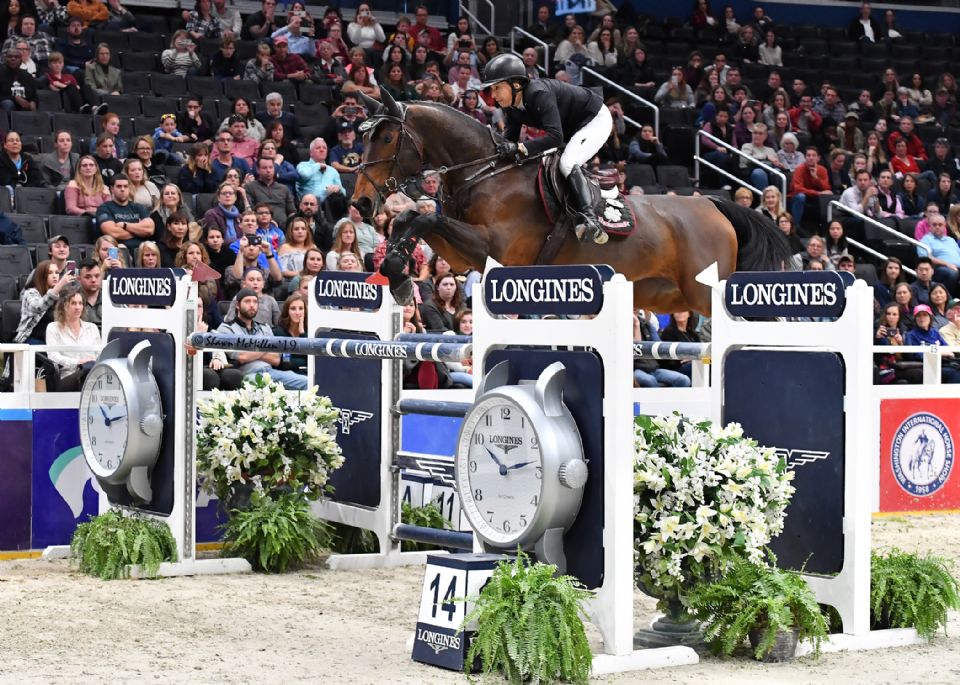 The ring will turn electric as some of the world’s top-ranked riders contest a challenging track for the largest purse in the history of the show.
Photo by Shawn McMillen Photography 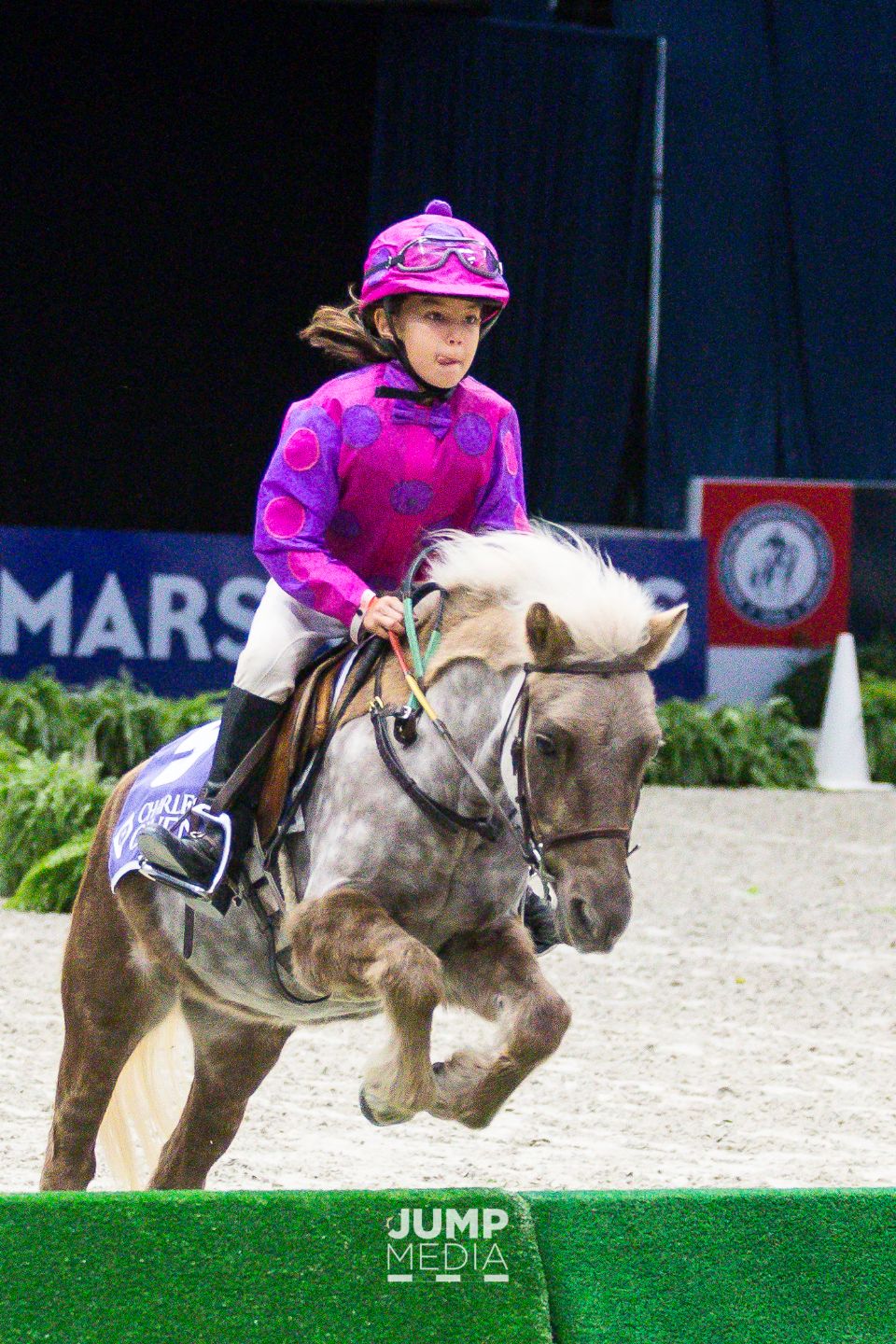 After competing at the Devon Horse Show in May, the Shetland Ponies return to The Show Place Arena to vie for championship honors and an award for the safest ride.
Photo by Jump Media 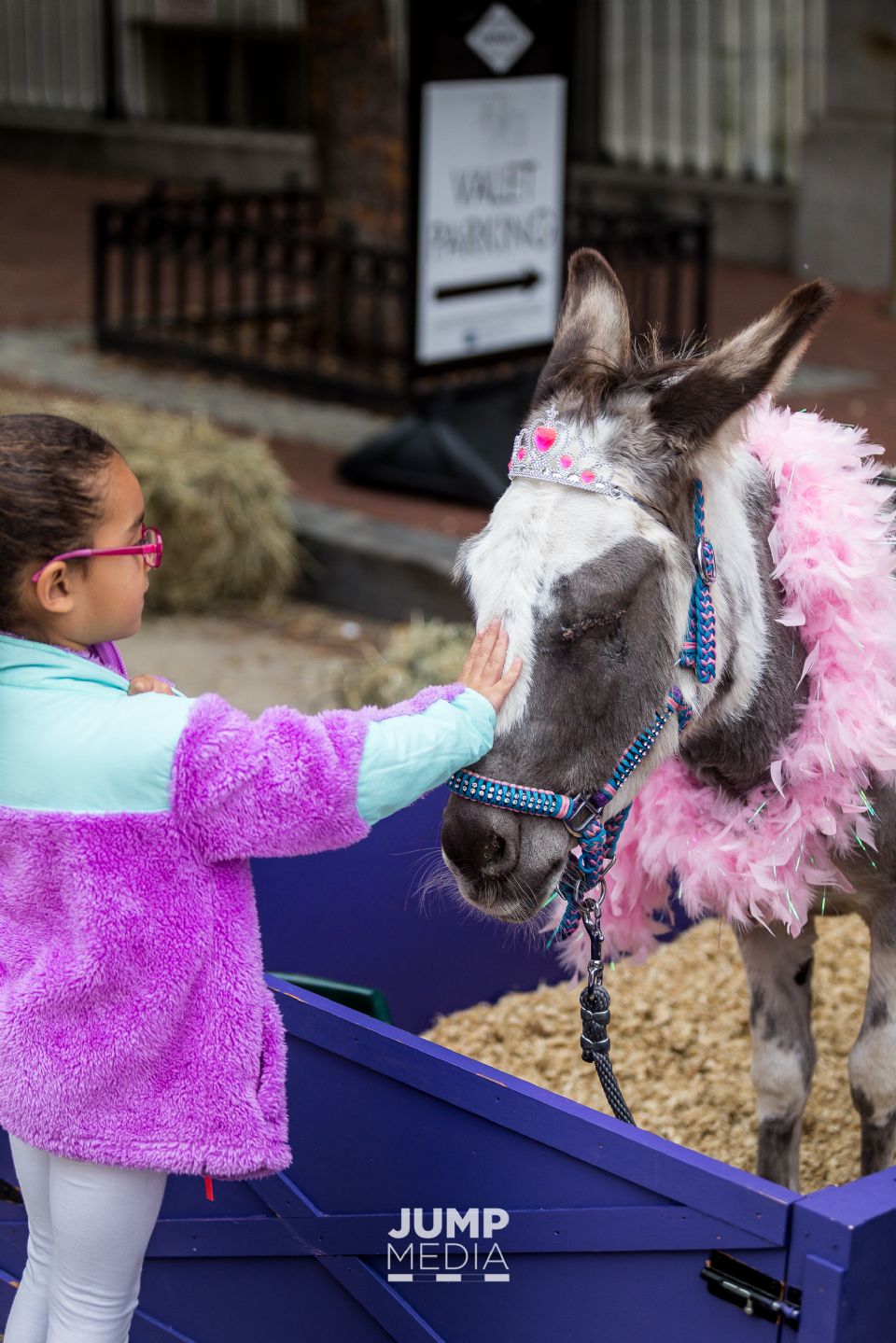 Activities at Kids’ Days will include pony rides, a grooming station, face painting, a horseless horse show with an opportunity to jump courses on foot and win ribbons, a pony kissing booth, carousel rides, plus special guest horses, ponies, and more!
Photo by Jump Media

Barn Night celebrates the camaraderie of barns and horse-loving groups with a program of contests and prizes. This year’s contest theme, “Gallop Green,” in partnership with “Green is the New Blue,” encourages barns to take strides to reduce our carbon hoofprints by sharing eco-friendly ideas for a chance to win great prizes!

WIHS will honor its close relationship with the U.S. Armed Forces on Military Night presented by Boeing. Setting the tone for the evening, Voices of Service, featuring retired military veterans, will perform the Star-Spangled Banner. (The group finished in the top five on America’s Got Talent season 14!). Look for the “Jump for TAPS” American flag fence during the $75,000 International Jumper FEI Speed Final benefiting Tragedy Assistance Program for Survivors (TAPS), the WIHS Official Military Charity since 2010.

The evening exhibitions start with a dressage demonstration by Redha Gharsa and Battlefield Angel HP AKA “Ezra.” Ezra’s owner, Rhiannon Barreda, is a retired U.S. Army MEDEVAC pilot. She served abroad for more than 10 years in Afghanistan, Korea, Kuwait, Iraq, and Qatar, bringing wounded and fallen soldiers to a safe zone. Ezra’s performance is a salute to veterans and active military personnel for their service and sacrifice.

Making its welcome return to WIHS, Jack Russell terrier racing will keep the energy going with 12 zippy and lovable terriers zooming through The Show Place Arena for ribbons and prize money.

The $25,000 International Jumper Puissance caps off the thrills with brave horses and riders jumping the great wall until only one combination remains fault free. The North American indoor record to beat is 7’ 7-1/2,” set at WIHS in 1983!

The WIHS Honor and Service Award will be presented to a horse, individual, or organization that best demonstrates the values of honor and service. In 2013, the first recipient of the award was the Caisson Platoon's Klinger, a special horse who has touched the lives of many through his life of service with the 3rd U.S. Infantry Regiment (The Old Guard) Caisson Platoon.

WIHS is honored to host the inaugural ETHOS Award Ceremony. Open to the public, the event will honor the contributions of African Americans to the horse world. This year’s honorees, whose individual and collective efforts have advanced equestrian sport, are from families where excellence in equestrian sport has spanned more than one generation. Honoree Donna Marie Cheek will receive a special ETHOS Award for her participation as the first Black member of the United States Equestrian Team. Click HERE to learn about all six honorees.

D.C. Washington, the voice of Washington sports, will perform the National Anthem before the nation's top junior riders enter the ring for the final phase of the coveted WIHS Equitation Championship. Later, the Shetland Ponies and their junior jockeys will be ready to race in the final event in the WIHS Shetland Pony Steeplechase Championship Series.