Taking a Chance on Madison 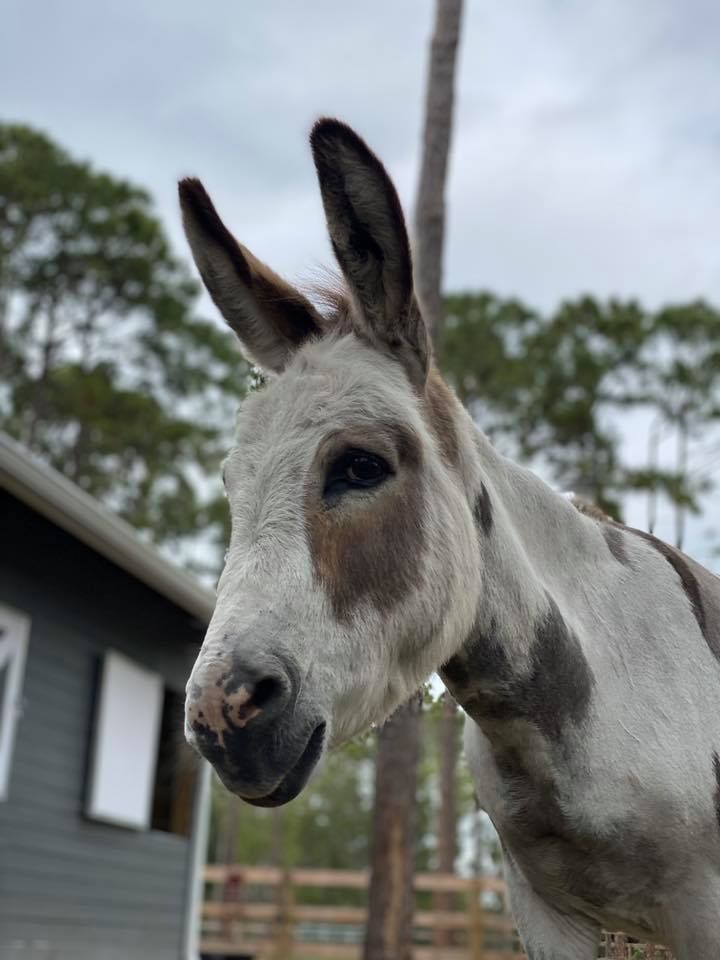 Madison at home in Florida.
Photo courtesy of Sariah Hopkins 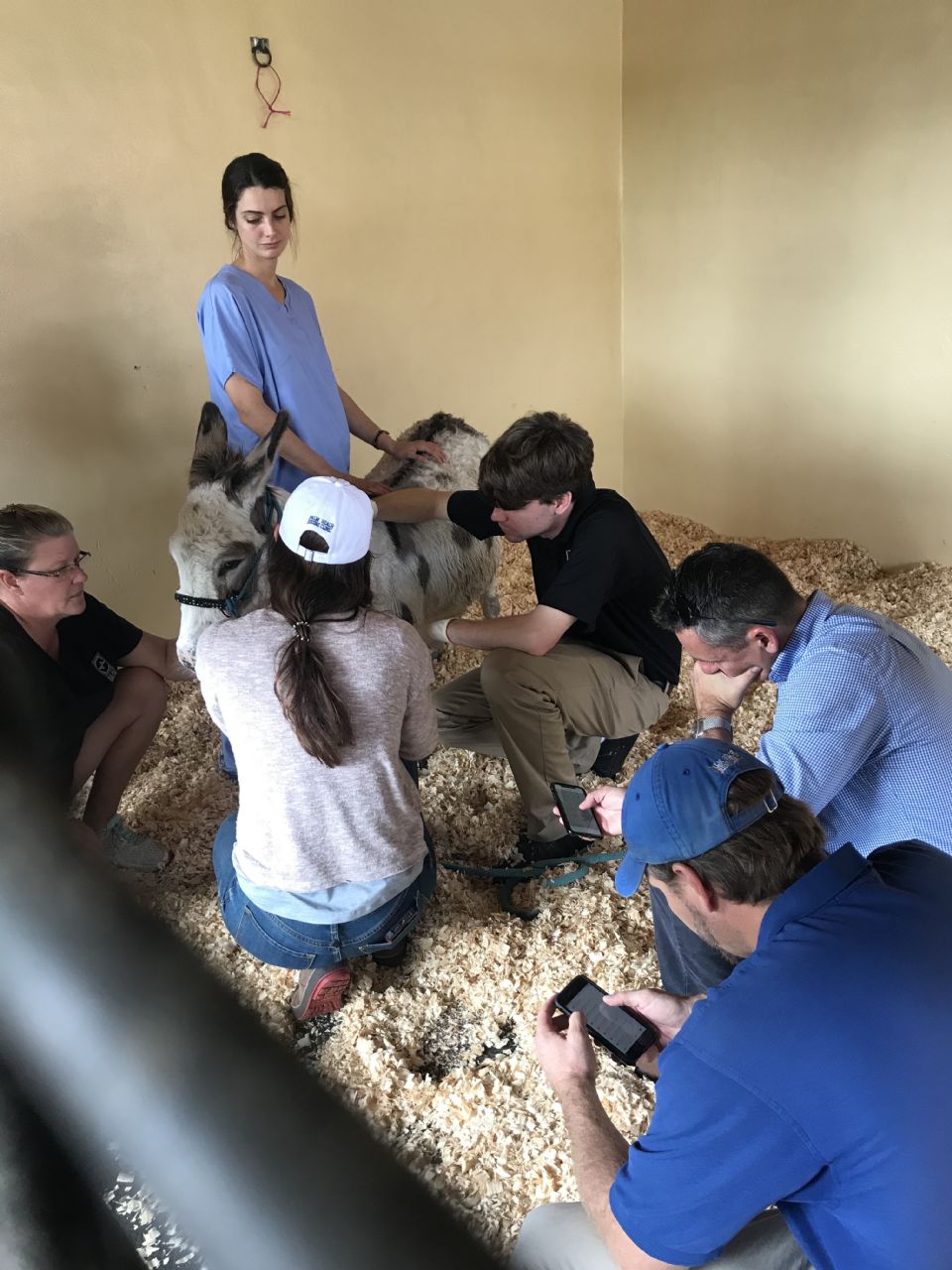 Madison at Palm Beach Equine Clinic in 2018, where a team of veterinarians evaluate her.
Photo courtesy of PBEC 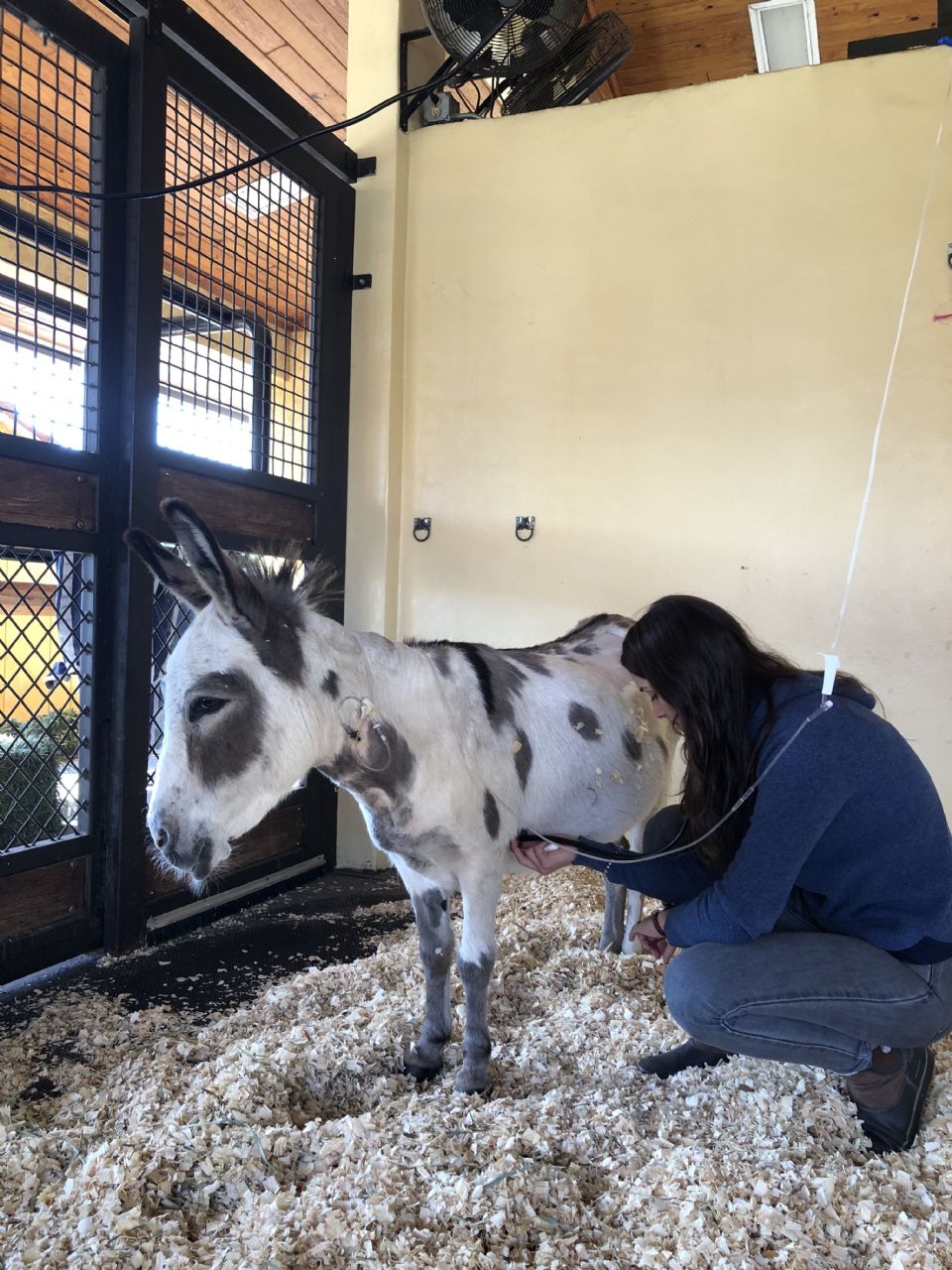 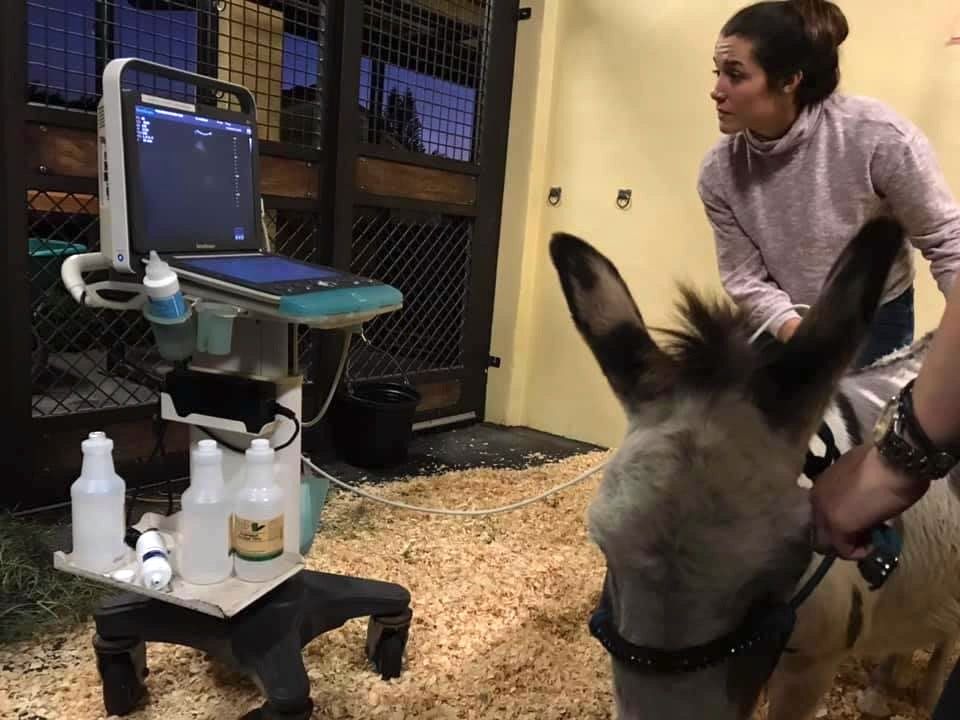 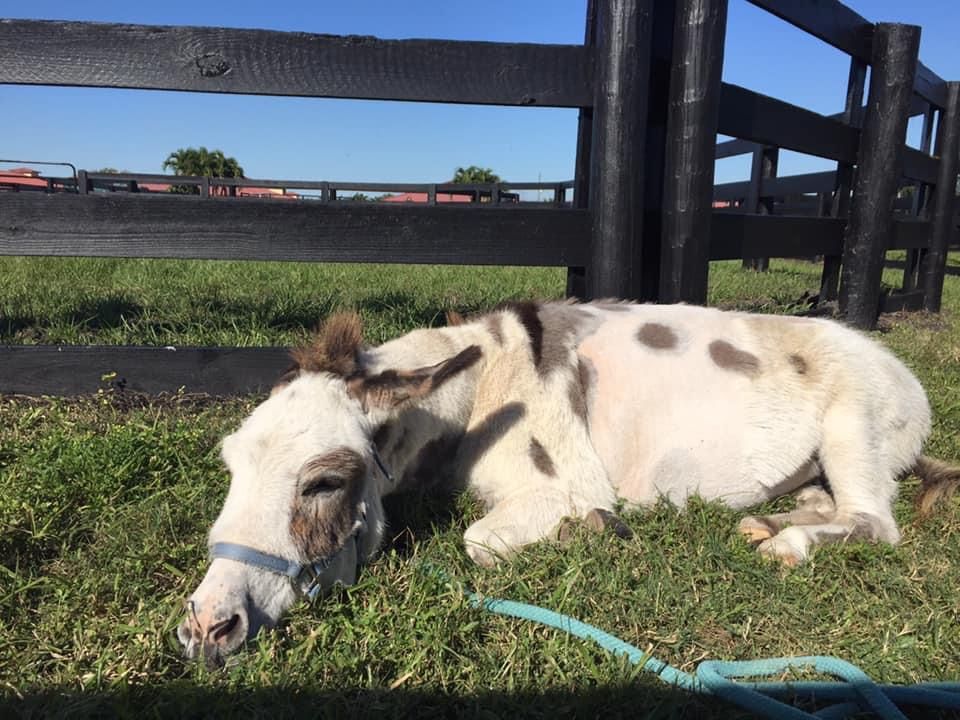 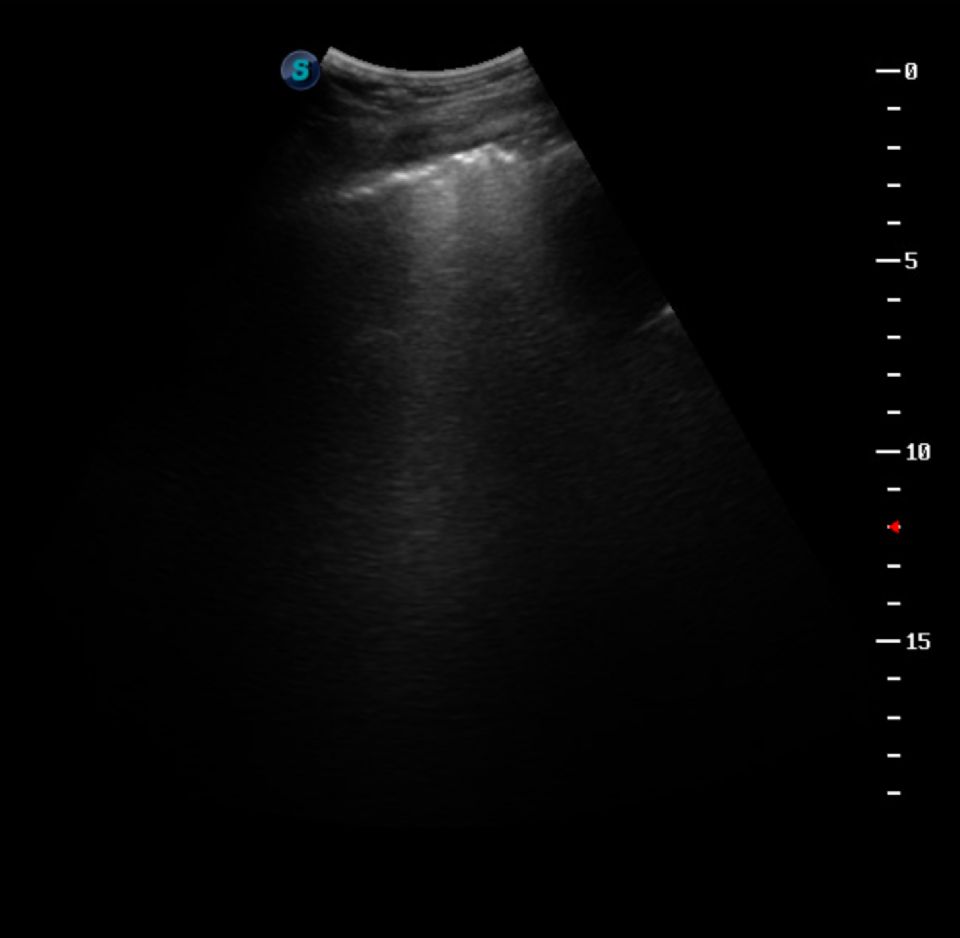 A view of the thoracic ultrasound that revealed lung consolidation and led to the pneumonia diagnosis.
Photo courtesy of PBEC

The popular veterinary adage, “if only they could just tell us how they feel,” never rang more true than in the case of an 11-year-old miniature donkey mare named Madison. Owned by Sariah Hopkins, “Madi” came to Palm Beach Equine Clinic by referral and was diagnosed with hyperlipemia, a syndrome common in miniature donkeys. Madi’s case, however, was never exactly how it seemed.

Hopkins describes Madi as the “center of attention.” Rescued from an animal hoarding situation by Safe Harbor Sanctuary in Nashville, TN, where Hopkins serves on the Board of Directors, Madi was officially adopted by Hopkins and her husband Joel in 2015.

“She was one of 40 horses and donkeys being kept on four acres of land,” said Sariah, who relocated to Juno Beach, FL, with Madi in tow in 2018. “She has always had a super sweet, calm personality, but likes to kick up her heels. We’ve done behavioral health therapy work with foster children and she makes everyone who meets her fall in love. She is so engaging.”

After trading Tennessee for Florida, Madi didn’t adjust to her change in environment with ease. According to Sariah, a systematic decline in her health started as the mare tried to adjust to a new barn, environment, farrier, and life. “She was depressed,” said Sariah. “She wasn’t her bright-eyed self. She’s a donkey and she will eat anything, so when she went off her grain and refused alfalfa, I called a local vet to pull fluids and run blood work.

“I reviewed the results with my vet in Tennessee who knows Madi and her history,” continued Sariah. “They were catastrophically bad, and she told me I needed to get Madi to a clinic immediately. I was referred to Palm Beach Equine Clinic by my friend Nataliya Boyko. Within minutes, I was on the phone with her vet, Dr. Bryan Dubynsky, and soon after we were on our way.”

Once Madison arrived at Palm Beach Equine Clinic, she was treated primarily by Dr. Abby Berzas and overseen by Dr. Dubynsky. They diagnosed her with hyperlipemia, and she remained at the clinic for two weeks.

Hyperlipemia syndrome is a common metabolic disease of ponies, miniature horses, and donkeys. In affected patients, an increase in serum triglyceride concentrations (hypertriglyceridemia) puts them at risk for liver failure, renal failure, and multiorgan dysfunction that can ultimately lead to death.

Genetically, donkeys are designed to live in harsh environments with poor-quality forage. As a result, they tend to put on weight and gain excess fat reserves when living on relatively lush pasture. Unfortunately, when they stop eating for any reason – usually stress induced –  hyperlipemia may develop due to a negative energy balance where more energy is being used than is being taken in through eating. The essential organs of the body still require a food supply, so it uses the energy that has been stored as fat deposits. The result is that free fatty acids are circulated to the liver and converted to glucose for use by the body.
However, donkeys are not able to efficiently turn off this fat release. The blood soon fills up with excess fat in circulation, causing them to become very sick and uncomfortable. This circulating fat is measured in the blood as triglycerides.
Madison’s case presented as a severe spike in triglycerides, which can be reduced by introducing sugars into the system. The sugar causes the body to release insulin and drive the triglycerides down.

“She responded well the first day, but we didn’t see the improvement that we would have liked or that she needed,” said Dr. Berzas. “We started more aggressive treatments the following day with insulin therapy and antibiotics. The dextrose caused a physiological increase in insulin, but it wasn’t enough. As soon as she had insulin therapy her triglyceride levels started coming down. They decreased significantly and she started eating again.”

Madison remained on insulin therapy for a week and was evaluated hourly by Palm Beach Equine Clinic veterinarians to monitor the possibility of hypoglycemic shock. When Madison was able to eat regularly and maintain low triglyceride levels without any help, she was discharged.

“I had access to Madi daily, and we made the most of her time in the hospital with long hand walks, grazing, and relaxing in her stall,” said Sariah. “I got updates from the clinic every two to three hours when I wasn’t there, and without any more clinical signs, she appeared to be improving.

“But, when I got her home she still was not herself,” continued Sariah, who spent hours sitting in Madi’s stall with her. Madi’s home was now Sariah and Joel’s private farm and they did all they could to eliminate the stress that supposedly led to Madi’s condition. “She was good for 24 to 48 hours and then would slide backwards again. One afternoon, I was sitting in her stall and she had a coughing fit that I was able to video. I sent it to [Dr. Berzas] and she came out to the farm to check on Madi.”

Dr. Berzas performed a thoracic ultrasound and spotted comet tails in her lungs, leading to one thing: pneumonia.

“We were wracking our brains to figure out what the original stressor might have been that led to the hyperlipemia, but Madi did not display any signs of pneumonia at the clinic and did not cough once,” said Dr. Berzas. "Then, there it was! Donkeys are stoic, tough animals, and sometimes they don’t give us traditional clinical signs.”

While hyperlipemia was the result, pneumonia was the cause.

“Cortisol, also known as the ‘stress hormone’ has a vast array of effects within the body, and it is one of the first triggers for the body to recruit energy from its peripheral stores,” explained Palm Beach Equine Clinic Internal Medicine Specialist Dr. Peter Heidmann. “It minimizes discomfort and increases blood pressure and metabolic rate, basically saying, ‘Now is not the time to conserve energy for the future. I need energy now in order to survive.’ In Madison’s case, the infection prompted the body to need more than average energy – it needed extra fuel to fight the infection.”

The typical diagnostic procedure for pneumonia is a tracheal wash procedure, but after consulting with Dr. Heidmann, Dr. Berzas elected to try and mitigate any further stress on Madison by choosing a less invasive procedure. Instead, Dr. Berzas used a special stylette that allowed them to go through the nasal sinuses and cleanly aspirate back cellular fluid for analysis. This option is called a bronchoalveolar lavage (BAL), and is most typically used for diagnosing cell types in the lungs.

“After culturing her fluid aspirate, she went back on antibiotics and responded well,” said Dr. Berzas. “She also had nebulizer treatments that delivered antibiotics directly to the lungs, which is the best way to treat the infection.”

One month after the pneumonia diagnosis, Sariah was proud to report that Madi had made a full recovery. “When we brought her in that first day, we frankly were getting ready to say goodbye,” said Sariah. “We were devastated, and Dr. Dubynsky agreed to try and save Madi. Thank goodness he did!”

Once the pneumonia was cleared, Madi’s routine returned to normal and the hyperlipemia was no longer an issue. Today, Madi is happily overseeing the day-to-day at Sariah and Joel’s farm.

“Palm Beach Equine Clinic treats some of the top sport horses in the world, but I feel that Madi – a very special donkey – received the same treatment,” concluded Sariah. “Dr. Berzas was 100% available to me, and she championed Madi. I could not be more thankful to her and the entire team of veterinarians and staff who rallied around our Madi.”

“When we have a case that’s particularly challenging to diagnose,” Dr. Berzas remarked, “it just reminds us of how fortunate we are to be part of a team of specialists. At Palm Beach Equine Clinic, we are able to tap into the knowledge and experience of our fellow veterinarians from different specialties, and really deliver that value for the patient.”

Sariah chronicled Madi’s condition and recovery on her Facebook page, developing quite a fan base for the little donkey. Madi’s story is far from over, but now she’s telling it herself and can be followed on Facebook as @MadisonJoelleDonk.