Sydney Collier and All In One Make a Winning Debut Together 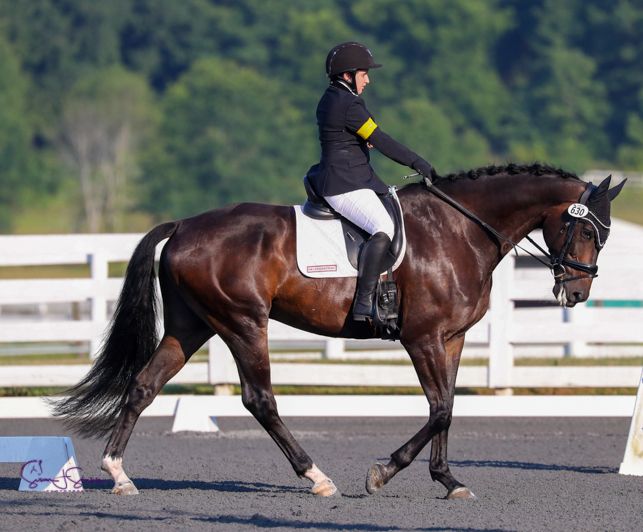 Sydney Collier is aiming for selection to the U.S. team for the 2020 Tokyo Paralympic Games with All In One.
Photo by Susanjstickle.com

U.S. Paralympic rider Sydney Collier won all three classes in her national-level showing debut with her new horse All In One. On August 16-18, they showed at the Centerline Events at HITS on Hudson in Saugerties, N.Y, and earned blues in two classes of Fédération Equestre Internationale (FEI) Para Equestrian Test of Choice and also in the FEI Para Equestrian Freestyle.

“I cannot even begin to tell you how proud I am of ‘Alle’ and our developing partnership—his talent and heart are endlessly giving!” Collier said. “Friday at Saugerties, we showed our team test under FEI four-star judge Ulrike Nivelle of Germany and retired FEI five-star judge Cara Whitham of Canada and received a score of 74.10 percent. We studied the judges’ comments from that test and then focused on them in our warm-up for the individual championship test on Saturday. We showed our individual championship test under Kari McClain, an FEI three-star judge from the U.S., and Nivelle, and earned our best score to date of a 78.57 percent!”

On Sunday in her Freestyle test, Collier scored 79.90 percent from judges Nivelle and Cesar Torrente, an FEI four-star judge from Colombia, to win the class. “I can’t even say enough how proud I am of Alle,” said Collier. “It is our first time showing a freestyle in a competition, and freestyles are my favorite part of a show by far. He really is the best dance partner a girl could ever ask for! I can’t wait to dance with him again soon.”

Collier is aiming to be selected for the U.S. team for the 2020 Tokyo Paralympic Games with All In One. Working toward that goal, she plans to show next at the Tryon Fall Dressage CPEDI3* and US Equestrian Para-Equestrian Dressage National Championships on September 12-15 in North Carolina. She intends to begin 2020 by competing in CPEDIs at the Adequan Global Dressage Festival in Wellington, FL, aiming for Paralympic team selection.

“I feel really excited by how much he and I have connected so early on in our partnership,” Collier said of All In One, a 10-year-old Hanoverian gelding (Abanos—Dauphina). “His nature is trusting and hard-working, and I can tell each time we enter the ring—whether it’s at home or at a show—that he understands and enjoys his job.”

Top U.S. show jumper Georgina Bloomberg purchased All In One in July to help support Collier’s Paralympic bid. Collier, 21, has represented the United States at the 2014 FEI World Equestrian Games in Caen, France, and the 2016 Rio Paralympic Games, where she finished seventh individually riding Western Rose. In 2014, she won the Against All Odds award from the FEI.

“It’s a pleasure to be able to support someone like Sydney,” said Bloomberg. “I want to see her be able to pursue her dreams. It’s nice to be able to help someone who’s working so hard and wants something so badly and deserves to get somewhere, but just has a financial roadblock preventing her from doing that.”

Collier rides at the Grade I para-equestrian dressage level, in which the tests are performed at the walk only. She began riding as able-bodied at the age of seven but switched to para-equestrian at age 11 after being diagnosed with the rare Wyburn Mason Syndrome. The congenital birth defect caused tumors and a massive stroke and subsequent brain surgery left her with limited use of the left side of her body, completely blind in her right eye, and three-quarters blind in her left eye. Collier’s hometown is Ann Arbor, MI, but she lives in Stanfordville, NY, in order to train with Wes Dunham at Woodstock Stables in Millbrook, NY.

“I want to say a huge thank you to the people in my life who have made this success on the path towards Tokyo possible,” Collier said. “None of this would be possible without my sponsor, Georgina Bloomberg. As well, a big thank you to my trainer, Wes Dunham, who has invested thousands of hours into my training over the years. I don’t know where I would be without him.”

An animal lover from an early age, Georgina Bloomberg has combined a career in international show jumping with extensive philanthropic work with animal welfare and The Rider’s Closet, an organization she founded to help provide underprivileged riders with clothes and equipment. Bloomberg, who also co-authored four young adult novels about the horse show world, is based in New York City, NY; North Salem, NY; and Wellington, FL.