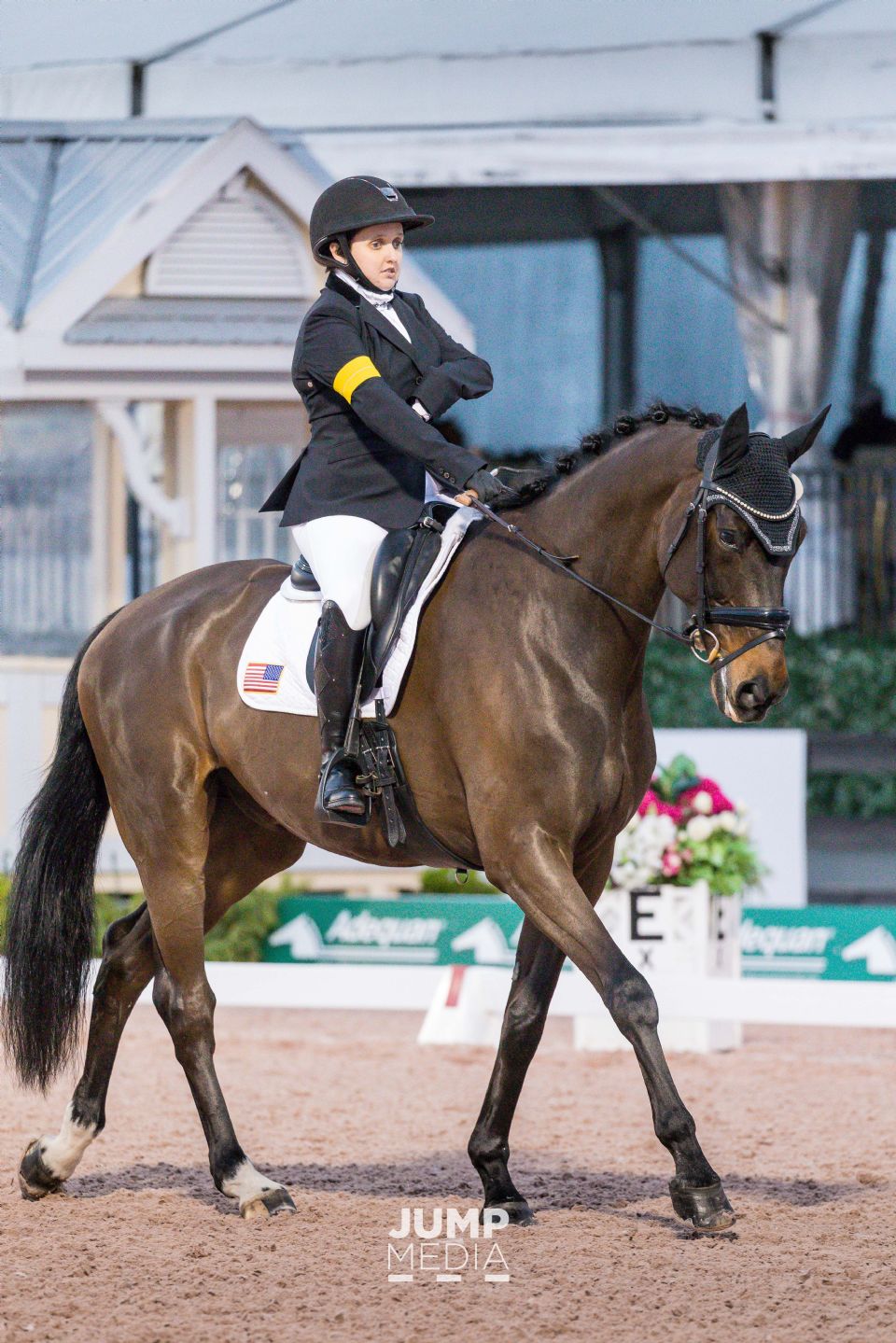 Sydney Collier and All In One competing at the Adequan Global Dressage Festival.
Photo by Jump Media 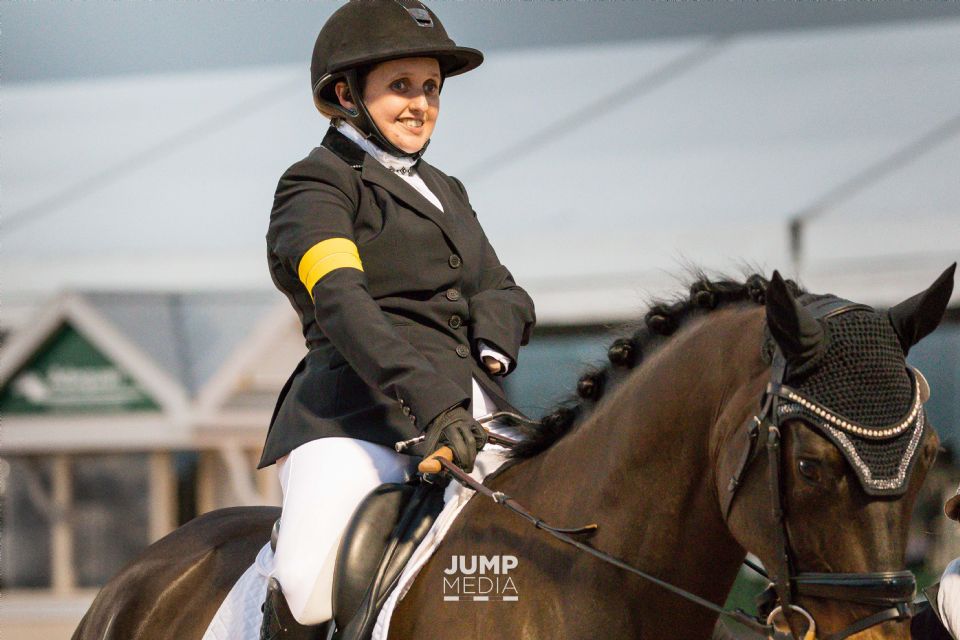 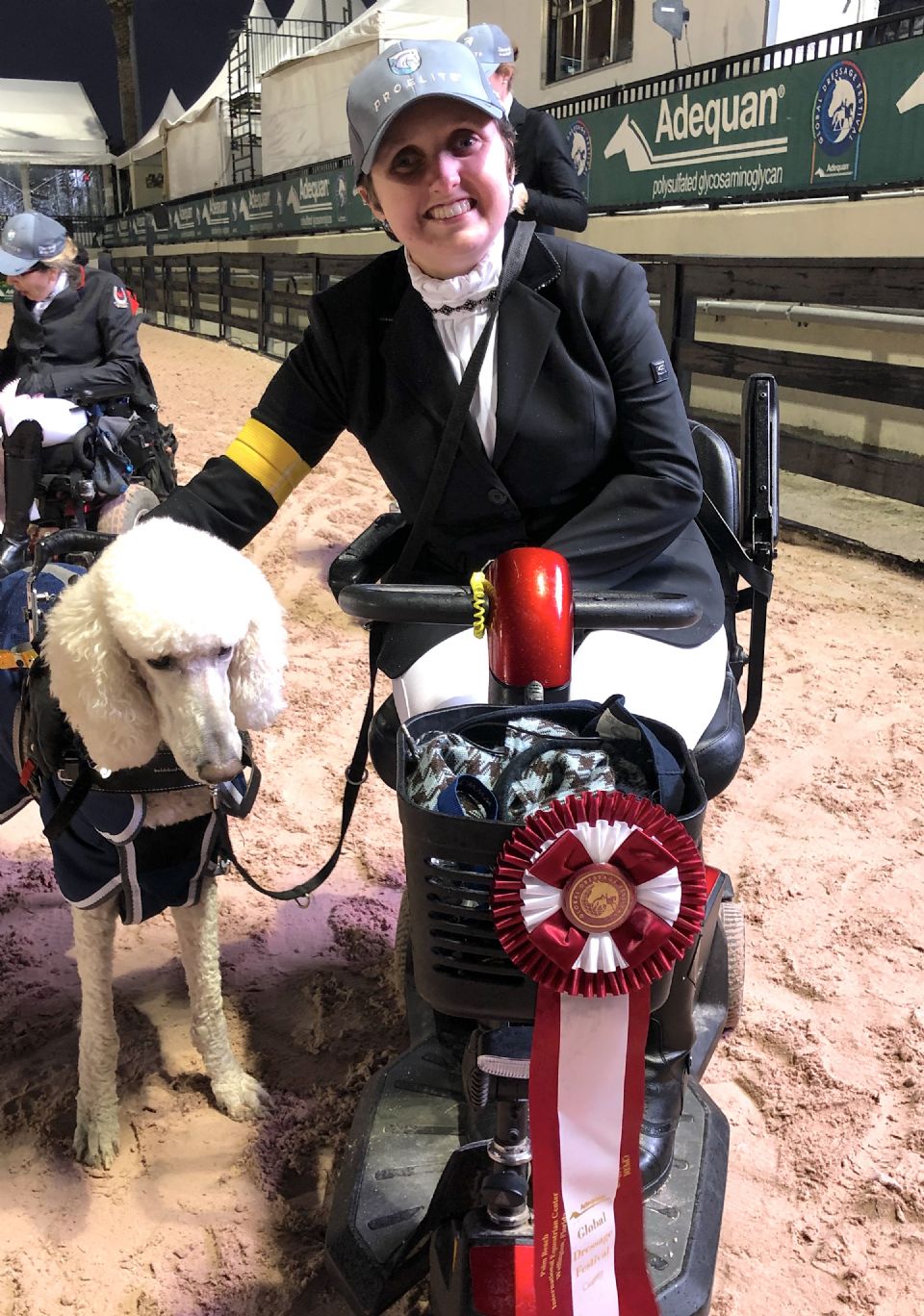 Sydney Collie and her service dog Logan show off their second-place ribbon at the Adequan Global Dressage Festival.
Photo by Jump Media

U.S. Paralympic rider Sydney Collier and her mount All In One, owned by Going for Gold LLC, collected top placings during the CPEDI3* held at the Adequan® Global Dressage Festival on January 22-26 in Wellington, FL.

Collier made her way on the podium three times, opening with a second-place score of 70.298% in the CPEDI3* Team Test Grade I, before again finishing second on a 73.631% in the CPEDI3* Individual Champ Grade I the following day. She and All In One closed out a spectacular week with a personal best score of 77.80% in their “Kung Fu Panda”-themed CPEDI3* Freestyle Grade I.

“We stepped in the ring and made every moment count. It brought the biggest smile to my face,” said Collier of her performances with All In One throughout the week. Together, they claimed reserve champion honors for the show.

“He’s the horse of a lifetime and every moment I get to spend riding him is the best time of my life,” continued Collier of All In One, or “Alle”, purchased for her in July by top U.S. show jumper Georgina Bloomberg. “I want to thank Georgina for bringing us together and cheering us on as we work towards Tokyo 2020. Also, to my trainer Katie [Robicheaux], a million thank yous for putting our heads, hearts, and hooves in the right direction.”

Bloomberg purchased All In One for Collier to help the determined rider realize a goal to be selected for the U.S. team at the 2020 Tokyo Paralympic Games. Collier, 21, has represented the United States at the 2014 FEI World Equestrian Games in Caen, France, and the 2016 Rio Paralympic Games, where she finished seventh individually riding Western Rose. In 2014, she won the Against All Odds award from the FEI.

“On my pathway towards Tokyo I remain dedicated to my goal of winning a team gold medal for America,” said Collier. “Bringing this medal back for the USA would proudly represent every person who has stood behind the three horses and riders on their way to the podium. From the farriers, veterinarians, grooms, sponsors, support staff, and our Federation, the teams that stand behind each horse and rider are the dedicated individuals who make success possible for our country at the games.”

“I could not be prouder to be a part of this journey, as well as be Sydney and All In One’s number-one fan,” said Bloomberg. “There’s no one who loves representing the United States more than Sydney. To see them one step closer to riding for their country at the Olympic Games in Tokyo with such a fantastic performance in Wellington is very exciting.”

“Sydney, ‘Alle’ and I started working together three and half weeks ago,” said trainer Robicheaux of their new partnership heading into CPEDI competition in Wellington. “We had an instant connection! Sydney’s hard work and attention to detail is inspirational. There was a lot at stake for them at this competition and I was extremely proud of how they handled the pressure.”

Collier rides at the Grade I para-equestrian dressage level, in which the tests are performed at the walk only. She began riding as able-bodied at the age of seven, but switched to para-equestrian at age 11 after being diagnosed with the rare Wyburn Mason Syndrome. The congenital birth defect caused tumors and a massive stroke. A brain surgery also left her with limited use of the left side of her body, completely blind in her right eye, and three-quarters blind in her left eye.

Out of the tack, Collier is combining her riding career with pursuing a degree in communications online through DeVry University. She was awarded a full scholarship through the Athlete Career Education program of the United States Olympic Committee.