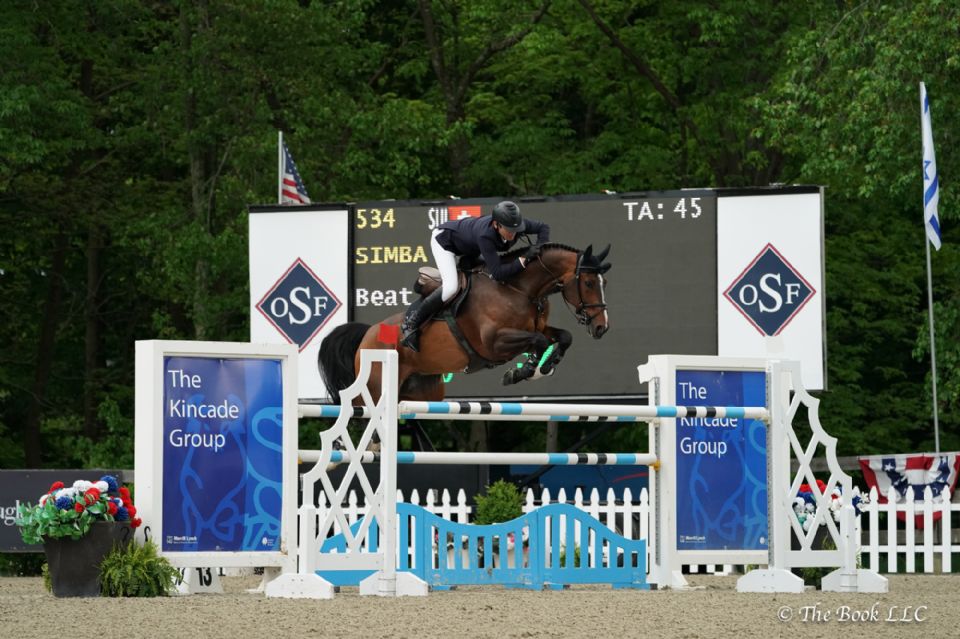 Switzerland’s Beat Mändli and Simba won the $131,000 Empire State Grand Prix CSI3*, presented by The Kincade Group, on Saturday, May 20, during the 2018 Old Salem Farm Spring Horse Shows at Old Salem Farm in North Salem, NY.
Photo by The Book 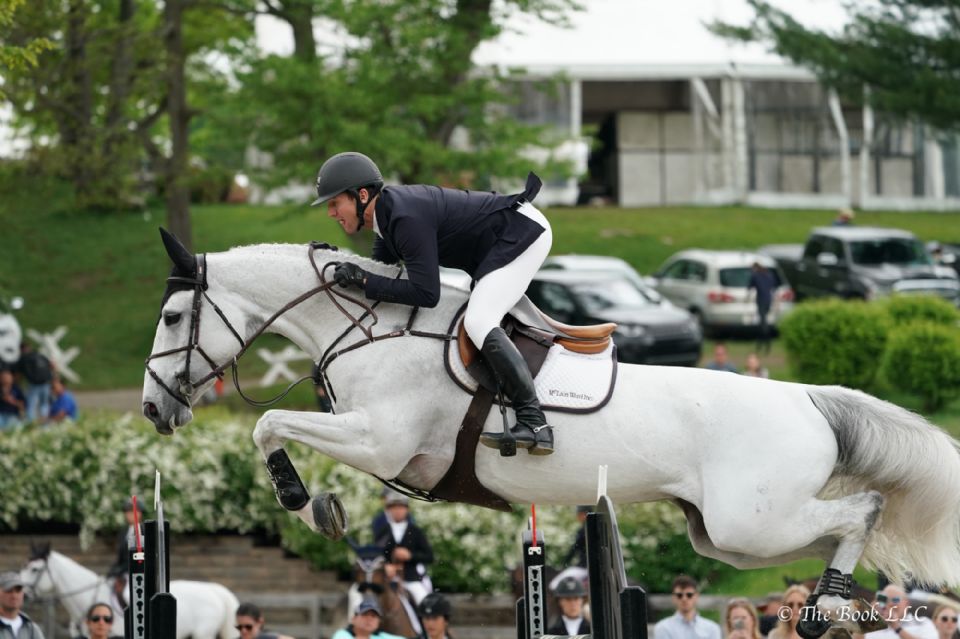 McLain Ward and Clinta were second in the $131,000 Empire State Grand Prix CSI3*, presented by The Kincade Group, on Saturday, May 20, during the 2018 Old Salem Farm Spring Horse Shows at Old Salem Farm in North Salem, NY.
Photo by The Book 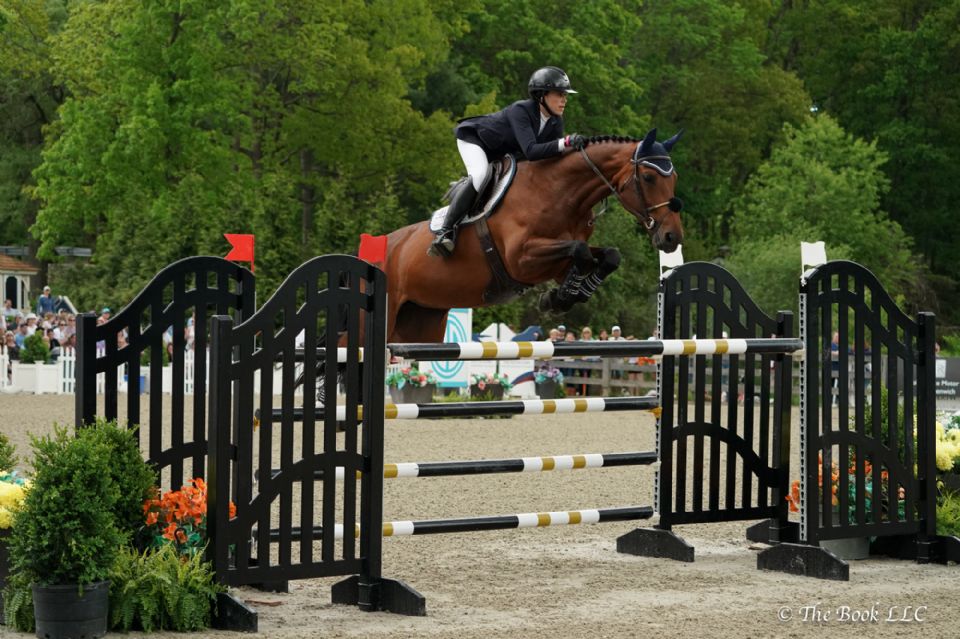 Brianne Goutal-Marteau and Viva Colombia were third in the $131,000 Empire State Grand Prix CSI3*, presented by The Kincade Group, on Saturday, May 20, during the 2018 Old Salem Farm Spring Horse Shows at Old Salem Farm in North Salem, NY.
Photo by The Book 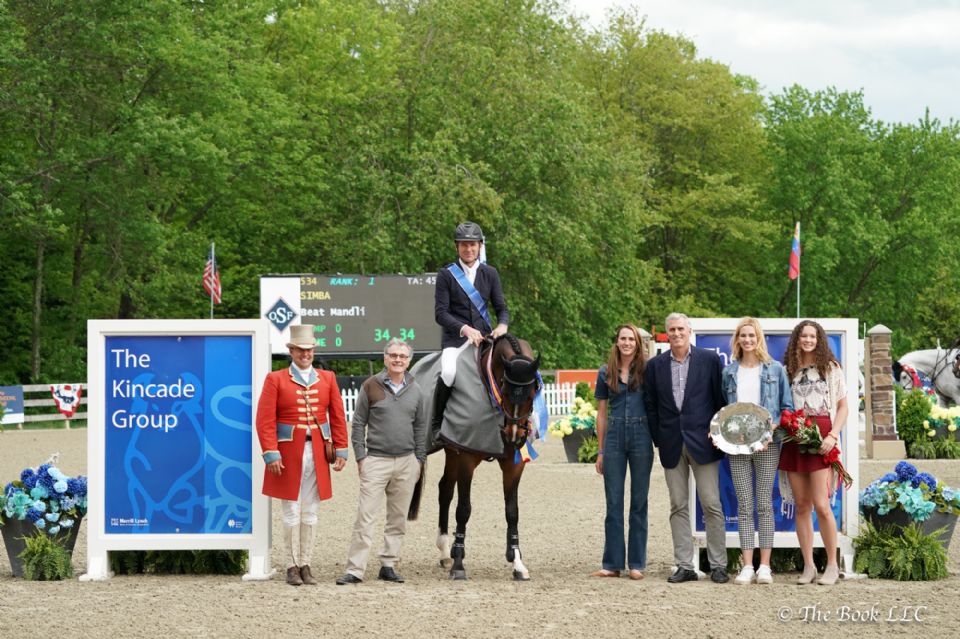 Beat Mändli and Simba were presented as the winners of the $131,000 Empire State Grand Prix CSI3*, presented by The Kincade Group, on Saturday, May 20, during the 2018 Old Salem Farm Spring Horse Shows at Old Salem Farm in North Salem, NY, by (left to right), ringmaster Alan Keeley, owner Jamie Dinan, and The Kincade Group representatives Gretchen Kincade, Stephen Kincade, Nicole Kincade, and Elena Kincade.
Photo by The Book

Switzerland’s Beat Mändli and Simba, owned by Grant Road Partners, won the $131,000 Empire State Grand Prix CSI3*, presented by The Kincade Group, during the final day of the 2018 Old Salem Farm Spring Horse Shows at Old Salem Farm in North Salem, NY, on Sunday, May 20. The highlight class of the two-week event also had local superstar McLain Ward of Brewster, NY, in second place with Clinta, while Brianne Goutal-Marteau (USA) and Viva Colombia were third.

There were 33 entries in the grand prix, and five found a clear round to advance to the jump-off over courses designed by Alan Wade of Ireland. First to return was the initial round pathfinder Amber Harte (USA) on Take the High Road LLC’s Cafino. They had four faults in 36.09 seconds for fourth place. Following Harte was Charlie Jacobs (USA) with Cassinja S, owned by CMJ Sporthorse, LLC. With nine faults in 46.60 seconds, they took home the fifth-place ribbon.

Ward and Clinta, now owned by Sagamore Farms, Ward, and Susie Heller, were next in and showcased Clinta’s astonishing jumping style, but with a missed inside turn, they would have to settle for second place in 35.36 seconds.

Ward noted, “I didn’t get a great turn after the third jump and had to go around the island. I knew I lost a little time. She has a really big stride, but there was really nowhere to leave out. I did what I could do, but I knew I left a little room and unfortunately Beat took advantage of it. I’m thrilled with the horse and excited about what’s to come with her.”

It was Mändli next in for the jump-off with Simba, and they executed the course and sped down to the final fence to stop the timers in 34.34 seconds.

“I thought I had to go fast obviously. I did one turn after the third fence inside [the planter]. He landed a bit shorter than McLain’s horse so I could do that turn,” Mändli said of the 12-year-old Oldenburg gelding by Toulon x Argentinus. “I think that’s where I made up the time. He was jumping unbelievable. He was very careful and made it very easy for me. It depended on how I catch that third fence. If I had a long one, then it would have been a bit difficult. It just worked out.”

Goutal-Marteau was last to go in the jump-off on Viva Colombia, a 13-year-old Oldenburg mare by Couleur-Rubin x Landor S, and they put in a solid clear trip in 35.58 seconds for third place.

“I loved her since the beginning,” said Goutal-Marteau of the mare she took over the ride on last summer. “She really blossomed when I started riding her. Every show, I feel her improve. I’m thrilled with her.”

Ward, a two-time Olympic gold medalist, is also excited about his new partnership with Clinta, an 11-year-old Oldenburg mare by Clinton x Lord Pezi, as he is now a partial owner with the Sweeney family’s Sagamore Farms and Susie Heller.

“It’s very exciting for the future,” he expressed. “We’ve had her a month-and-a-half and she’s had one fence down. She’s spectacular.”

Mändli took over the ride on Simba a year and a half ago from his student, U.S. show jumper Katie Dinan.

“He’s a little bit of a strong horse,” Mändli described. “I took him over and it goes quite well. I’m very happy with him.”

With his top horse Dsarie and Simba, Mändli has a strong string going to Europe this summer. He will ride on the team for Switzerland in the FEI Nations Cup™ in St. Gallen. Competing at the Old Salem Farm Spring Horse Shows gave him strong preparation.

“I had Dsarie here last week so she had two rounds on the grass that I wanted,” he said. “It would have been nice if we could have jumped on the field [today], but the arena is also very nice. It’s good for the horses and no risk.”

Earlier in the day, Katherine Strauss of New York, NY, won the $10,000 High Junior/Amateur-Owner Jumper Classic, presented by Beval Saddlery, riding her own All In. In the $7,500 Medium Junior/Amateur-Owner Jumper Classic, presented by Hollow Brook Wealth Management, Lauren Ward and Vedor, owned by McLain Ward, took the victory.