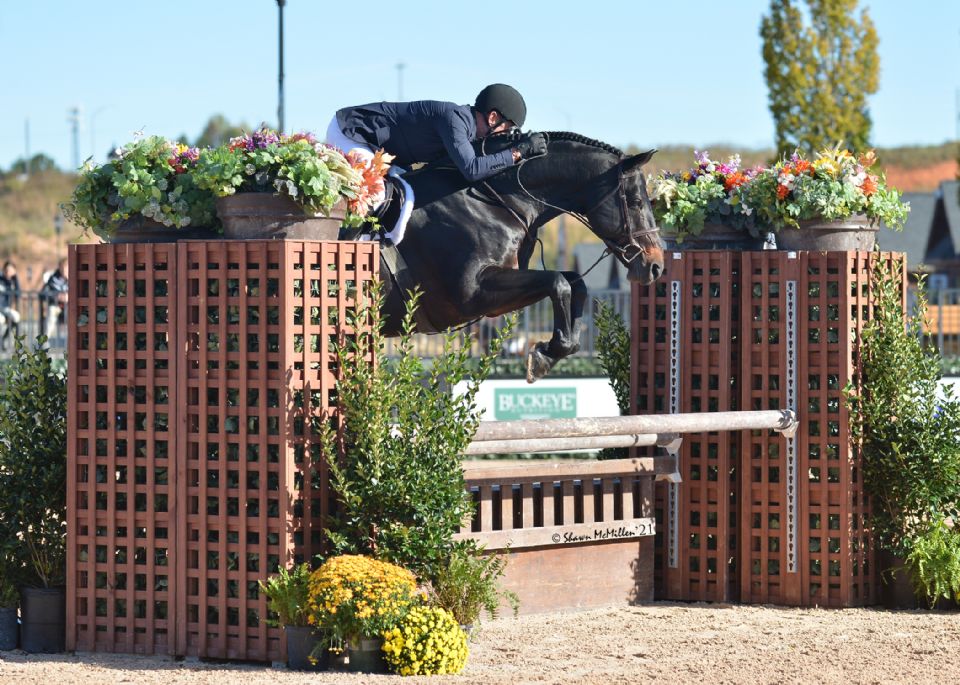 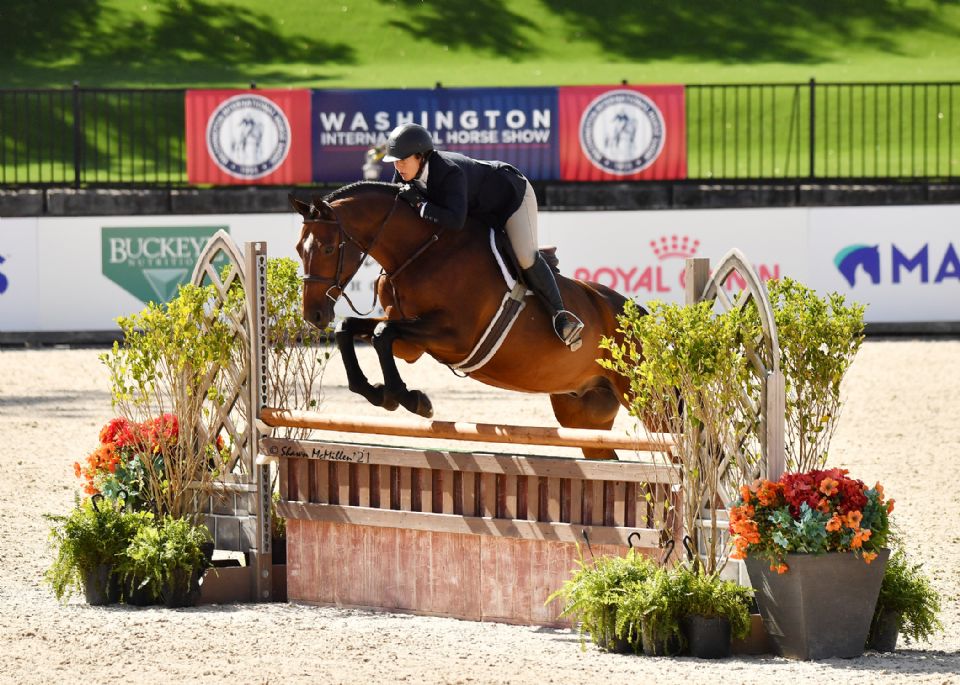 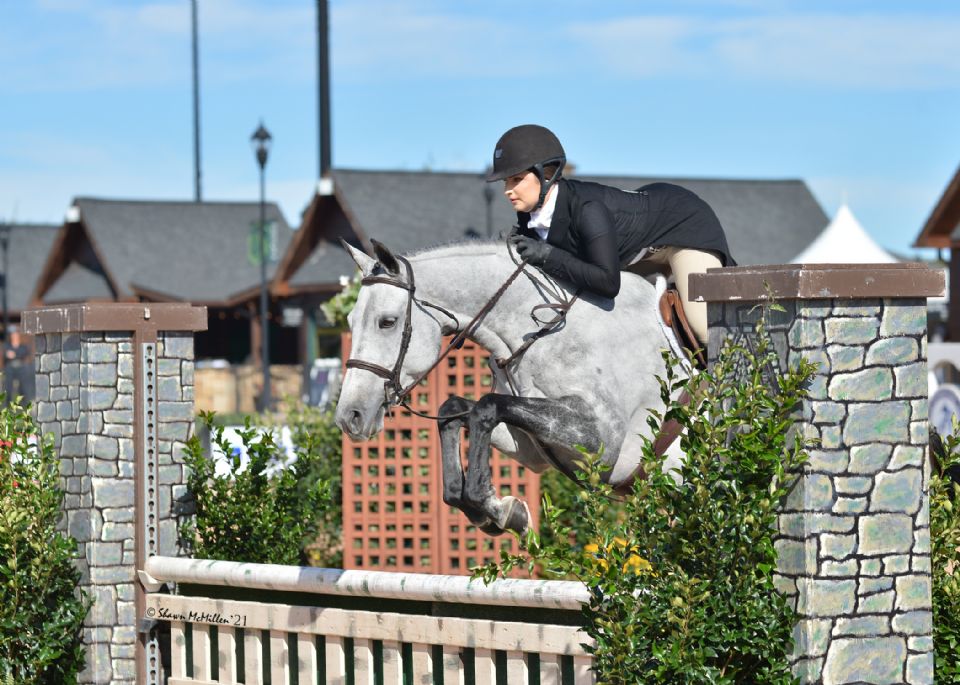 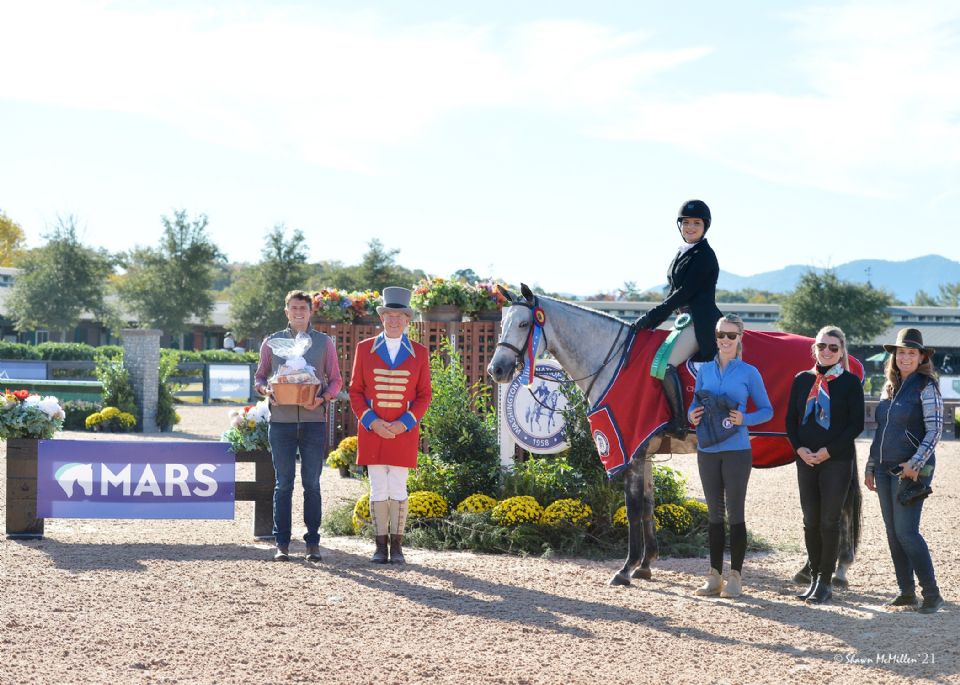 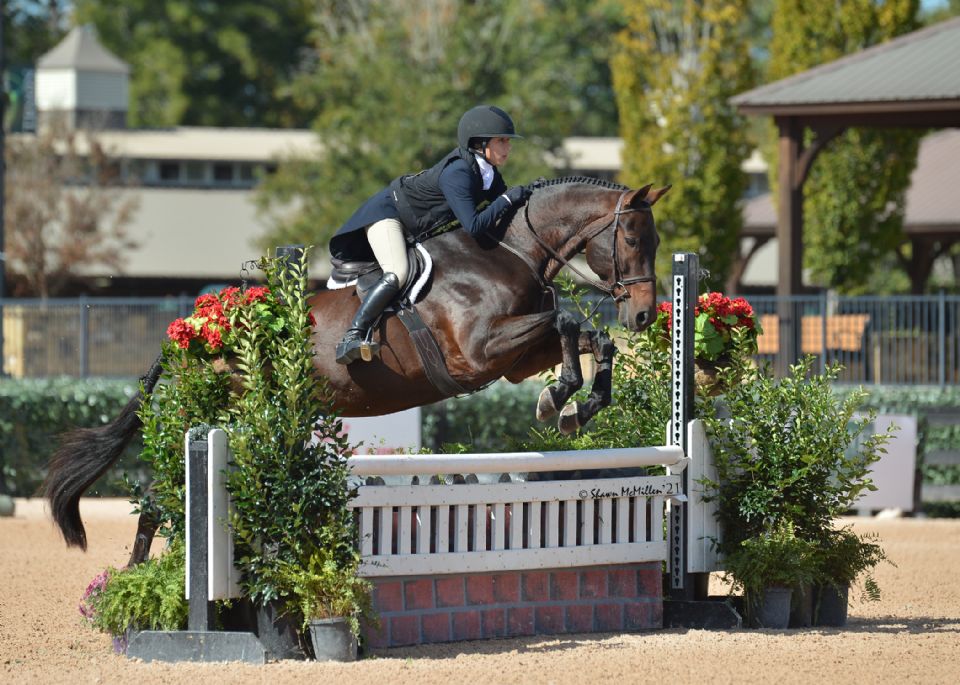 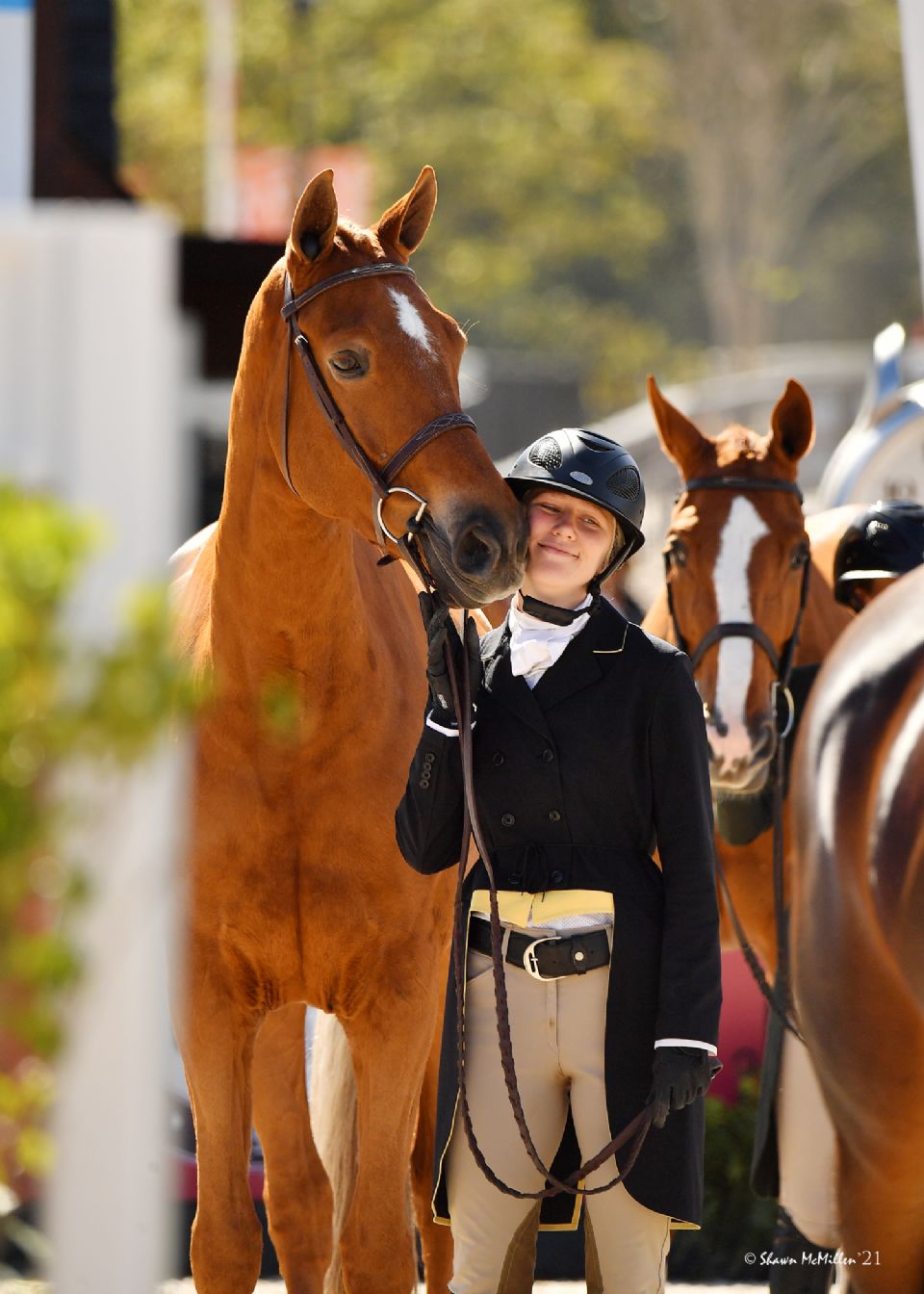 As one of the nation’s top hunter riders, Stewart is accustomed to sitting at the top of the leaderboard, but Charlemagne waited quietly in the wings as COVID-19 put a wrench in the stallion’s 2020 competition plans.

"He showed a little bit in the Pre-Green Hunter division as a five-year-old, and he was quite successful,” shared Stewart. “Then last year, I think he only showed maybe two or three times before COVID happened and then he didn't compete the rest of the year.”

Stewart credits Charlemagne’s easy-going nature for being able to step up to the plate this week in Tryon Stadium and the Grand Hunter Ring at WIHS. "He's really easy every day at home, and he doesn't really act like a stallion at all,” said Stewart. "He was actually really good in the big ring yesterday. That was exciting.

"He's never a wild horse; he's almost lazy sometimes, so the cooler air this morning actually helped,” he continued with a laugh.

Stewart is quick to credit Dr. Parker for the horses that have carried him to success over the years. "I'm lucky to have these horses that can help me win all this,” he said.

For Dr. Parker, Stewart’s success is always a highlight, but she appreciated this year’s WIHS and its location at Tryon. “Things are different, but it’s a great show in its own right,” she said. "I’ve really thoroughly enjoyed it, especially the trophies and ribbons. Everyone on the WIHS team, great job from team Huntland and Rivers Edge."


The Delta Trip of the Day went to Augusta Iwasaki and Ashland Farms' Attendu de Lannois Z, who competed in the Green Hunter 3’9” division.

Sexton and Zimmerman Are Grand in the Amateur-Owner Hunters

After being partnered for nearly six years, Laura Sexton and Set To Music are no strangers to the winners circle, but when they emerged the Grand Champions of the Amateur-Owner Hunters 3’6”, it was a little extra special. In April, Set To Music—known as Calvin in the barn—was found cast in his stall. Thankfully, he made a full recovery at an equine clinic, but it also kept him out of the show ring for six months. “We weren't sure if he would need to retire or not, so the fact that he's here and is still loving his job makes the win even more special,” shared Sexton.

Once Calvin recuperated and it was clear he wanted to be in the ring, Sexton still made it a point to take it slow with him. "All summer I focused on getting him in shape and fit enough to be able to jump,” continued Sexton. "We took our time and then went to two little local shows at home before coming to WIHS. His successful recovery has made the win mean a lot more. I know this is WIHS and it's a big deal, but today has extra meaning. It's very nice and special.”

The pair don’t often compete at WIHS, and this was Sexton’s first trip to Tryon, so she has enjoyed the opportunity to show in this championship and in Tryon Stadium. “It is definitely a beautiful venue and a lovely experience,” she said. "Anytime you have big open lines like you do [in Tryon Stadium] it tends to suit him very well because he can just walk down them. The spookier the better; he fires up over anything that's a little impressive. He loved this ring today.”

As Sexton talks about what’s ahead for her and Calvin, she said it will be up to him. “When he wants to show, he shows,” she concluded about the 15-year-old Warmblood gelding. "He calls the shots at this point, anything to keep him happy.” For their grand championship, Sexton took home The Frank Counselman Memorial Perpetual Trophy donated by Friends of Frank Counselman.

Zimmerman, who rides with Hunt Tosh, became acquainted with Lights Out while he was being campaigned by Tosh in the green conformation hunters for the Wheeler family. “I bought him during [The Pennsylvania National Horse Show],” said Zimmerman of the 10-year-old gelding by Lights On. “He came home from Harrisburg, I tried him, and he didn't get on the trailer to go to WIHS because I bought him! I was very, very fortunate.”

The fact that Lights Out had an impressive career with Tosh created a bit of added pressure for Zimmerman initially. "I was a little nervous because Hunt was the only one that had ever shown him, and I was like, 'Oh my gosh, is he going to be able to do this with me?’” she admitted. “But he's been great ever since and he’s settled into the role as an amateur-owner hunter really well.”

Zimmerman thinks the gelding’s experience with Tosh helped prepare him for tackling the big track set in Tryon Stadium. "It was a little nerve-wracking at first,” she shared of showing in the large arena. "I wasn't sure how it was going to go. I think because [Lights Out] had done a lot of the bigger stuff with Hunt, he sort of came in and was like, 'Game on, this is the big time.' He really stepped up to the plate, he jumped amazing, and did everything I told him to do—which luckily was correct!”

Though the pair have a strong partnership, Zimmerman notes that the team around her has greatly contributed to their success including Tosh; Aubrey Sears, Zimmerman’s trainer near her hometown of Cincinnati; and Tosh’s team member, KJ Pearson. "I'm very fortunate that KJ, who works for Hunt, loves him and prepares him perfectly for me,” she said. "She and [Lights Out] have a very amazing relationship.”

For Kaycie Miranda, 15, of Atlanta, Georgia, it was her horse of a lifetime, Notable, that carried her to the win in the $10,000 WIHS Children’s Hunter Championship presented by MARS Equestrian™. Miranda purchased the gelding in April 2020, at the height of the COVID-19 pandemic from Elizabeth Cram who had campaigned him with great success in the 3’3” junior hunters.

“When I moved up from a pony, we were kind of just looking for a horse that could get me from the pre-children’s hunters to 3'3" junior hunters,” explained Miranda. "We chose him because we saw a lot of potential in getting me to the 3'3" junior hunters, and the WIHS Children’s Hunter Championship is just one of the many steps to getting there.

"[The Crams] loved him very much and they treated him fantastic,” she continued. "We are just so lucky to have him. He's a once-in-a-lifetime horse. He has taught me so much already, and I love him."

A mistake in the previous day’s $2,500 WIHS Children’s Hunter Welcome class kept them out of the ribbons, so today’s win came a bit unexpectedly for Miranda. "I was kind of nervous coming into the first round today, but he just really helped me get there,” she said. “Then, in today’s second round, I was sitting in sixth. I knew I was probably going to be top six either way, but I was going to be happy with any placing because this is my first WIHS. Then I got to the top three, and it's unbelievable that we won this. I was not expecting it.”

Though Notable’s show career began in the dressage ring, his way of going made him a suitable hunter and the ideal partner to help Miranda reach her goals. “Of course, he has his own personality but he's different than what I'm used to in a good way,” said Miranda. "He's forward and carries me. He loves being at the shows and he loves going out there and winning, I think as much as I do.”

Sophia Vella of The Plains, VA, and her own Just For Kicks were victorious in the $10,000 WIHS Adult Hunter Championship, presented by MARS Equestrian™ during Wednesday’s competition. The two made the most of their trip to Tryon after having qualified for WIHS by earning co-grand champion in the Adult Amateur Hunter division at the WIHS Regional Horse Show that took place at Morven Park International Equestrian Center in Leesburg, Virginia, October 21-24, 2021.

“Last minute but we made it!” laughed Vella of the short time between her win at the WIHS Regional Horse Show and WIHS at Tryon International Equestrian Center. “I'm just ecstatic because I didn't believe it when they called our name first. Just For Kicks was phenomenal, and she was right with me every stride. I’m super grateful.”

Not only did they earn back-to-back WIHS wins in a matter of days, Just For Kicks is a newcomer to competing. “She just started jumping. She's only seven this year, so this is her first year of showing,” said Vella of the Dutch Warmblood mare by Durango VDL. “We are out of The Plains, Virginia, and we like to go to all of the Virginia shows we can. We didn't do her in the classics this year because she's so new to it and we thought, ‘Well, she's been going great. We'll take her to the [WIHS Regional Horse Show] and fingers crossed she'll be champion.’ Low and behold she was phenomenal and actually had a clean sweep there. I was pretty ecstatic, and I was super excited to be able to take both of my horses to WIHS at Tryon. She loves the atmosphere here.”

Though Vella is a seasoned competitor, she was also a newcomer to WIHS. “This is my first time at WIHS,” she noted. “I knew it was going to be at Tryon, and I thought that might suit both of my horses because we hadn't had any indoor experience at all. I just thought if we were able to qualify, we should come and just give it our best shot and who knows what will happen.

“I'm really hoping to move up to the 3'3" [amateur-owner division next year] and this was just an unbelievable way to close out the season,” she continued. “Thank you to my parents because without them this truly wouldn't be possible.”

The 2021 WIHS presented by MARS Equestrian™ continues on Thursday, October 28, with opening jumper classes for the Children’s, Adult, Low/Medium/High Junior/Amateur-Owner, and International divisions, with the highlight class, the $72,900 Welcome Stake, at 6:30 p.m. In the Grand Hunter Ring, junior hunters begin their classes. For more information, visit www.wihs.org.