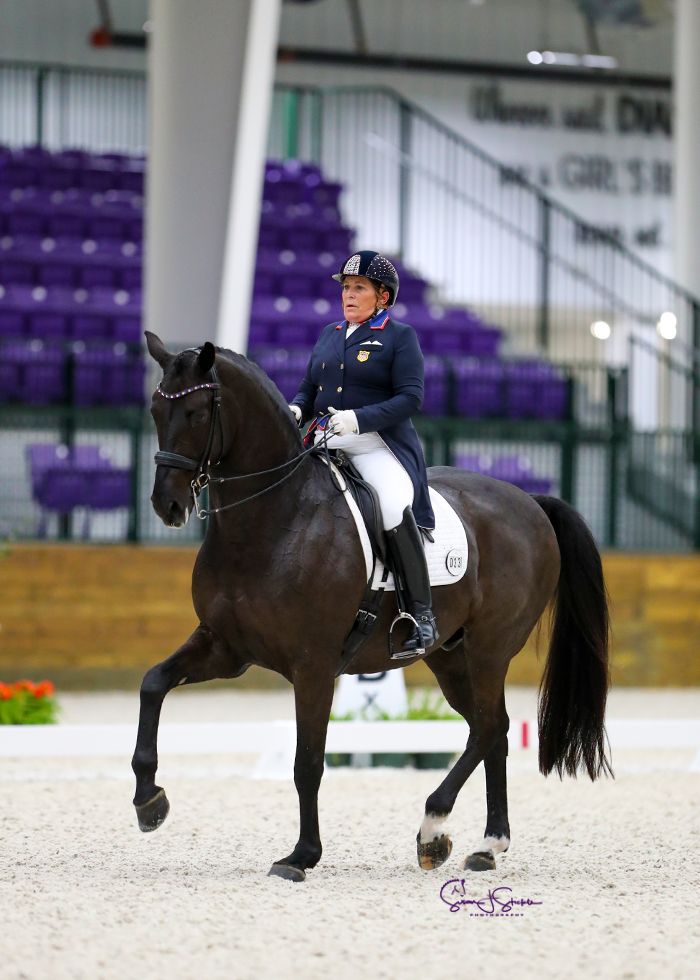 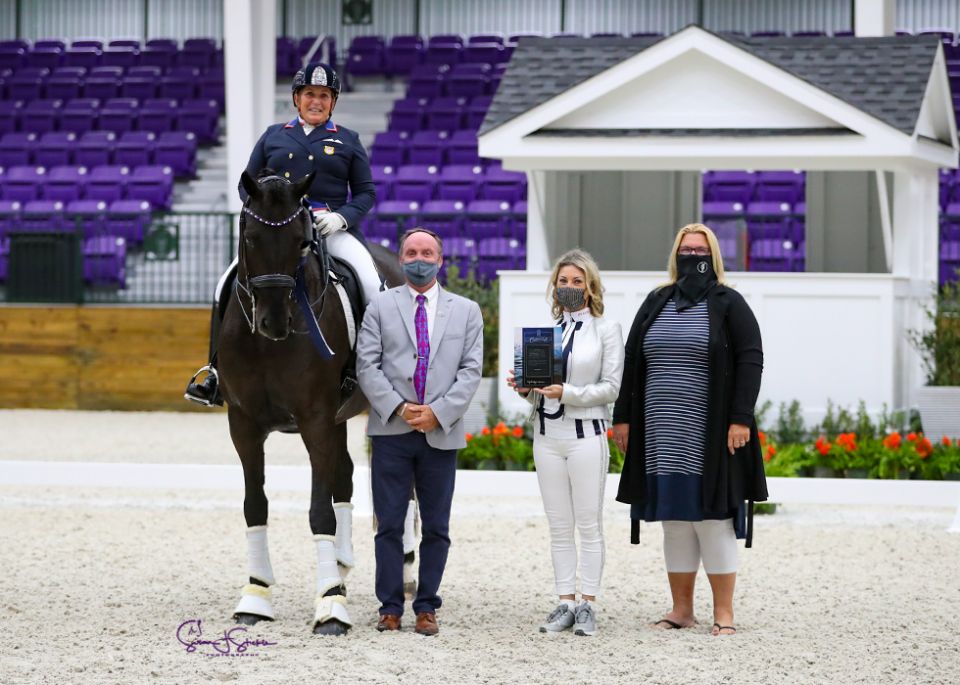 Shelly Francis and Danilo were joined in their winning presentation by judge at C William Warren as well as Olga Hartsock and Miranda Van Kol of CaptiveOne Advisors.
Photo by SusanJStickle.com 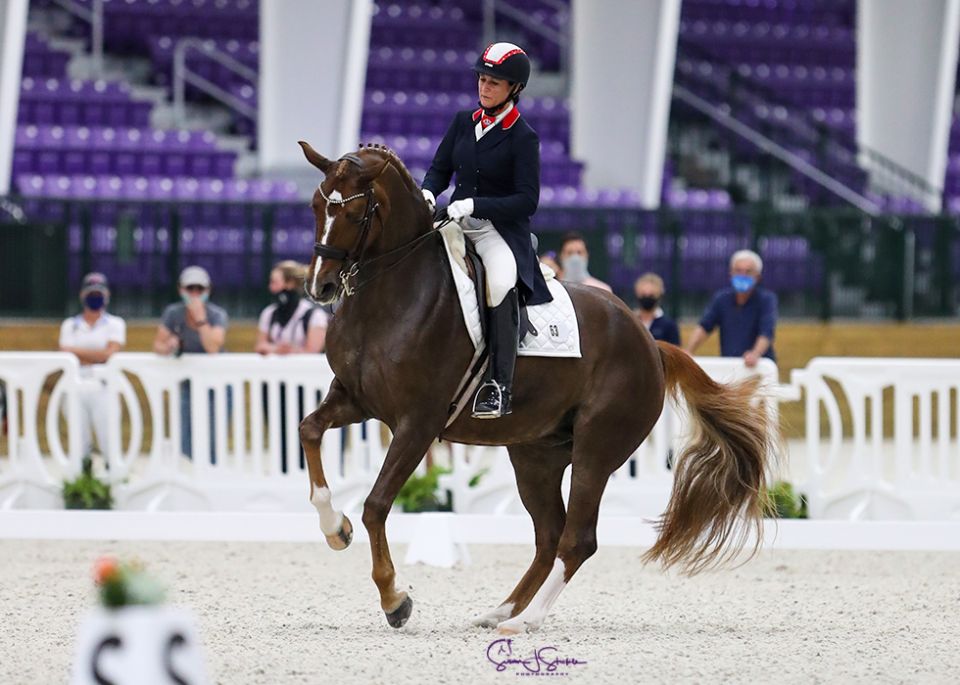 Catherine Haddad Staller and Frankie finished second in the freestyle.
Photo by SusanJStickle.com 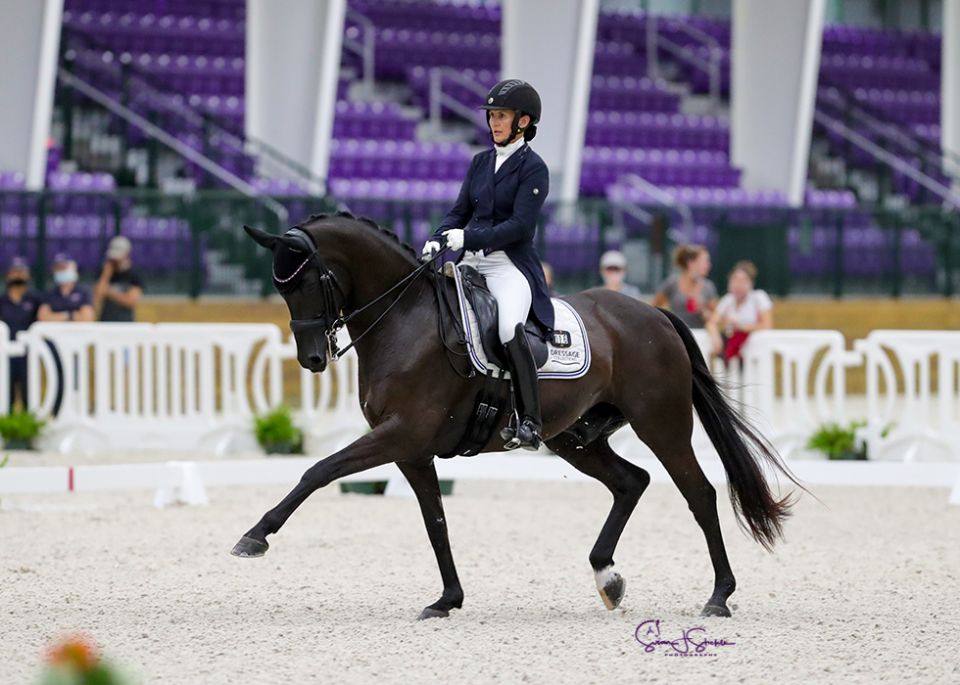 Third place in the freestyle went to Mikala Munter and Salsa Hit.
Photo by SusanJStickle.com 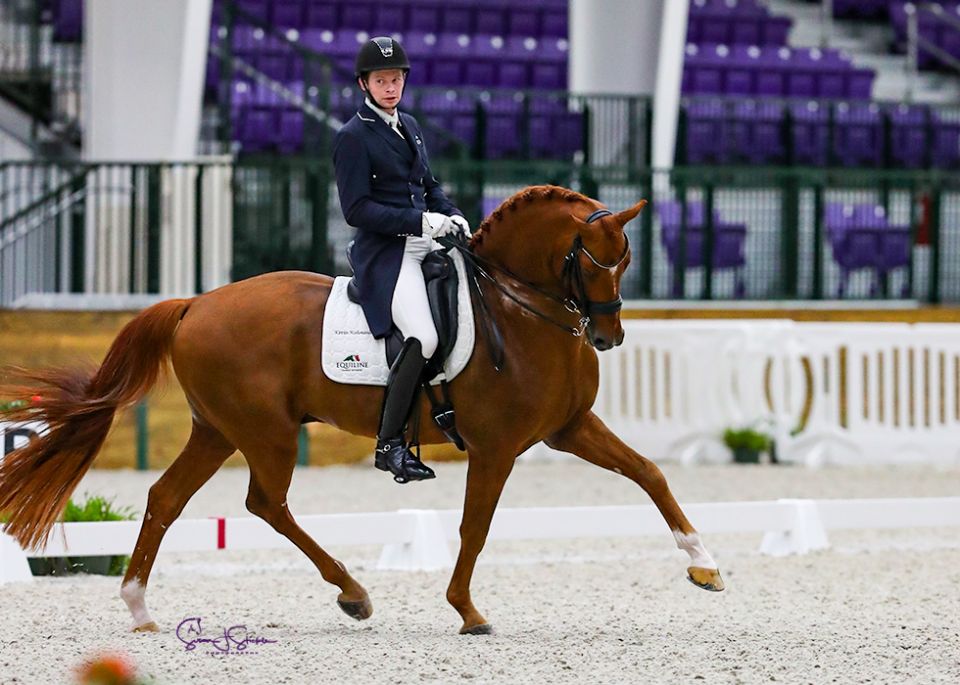 Kevin Kohmann and Five Star won their second class in a row in the FEI Intermediate 1 CDI3*.
Photo by SusanJStickle.com 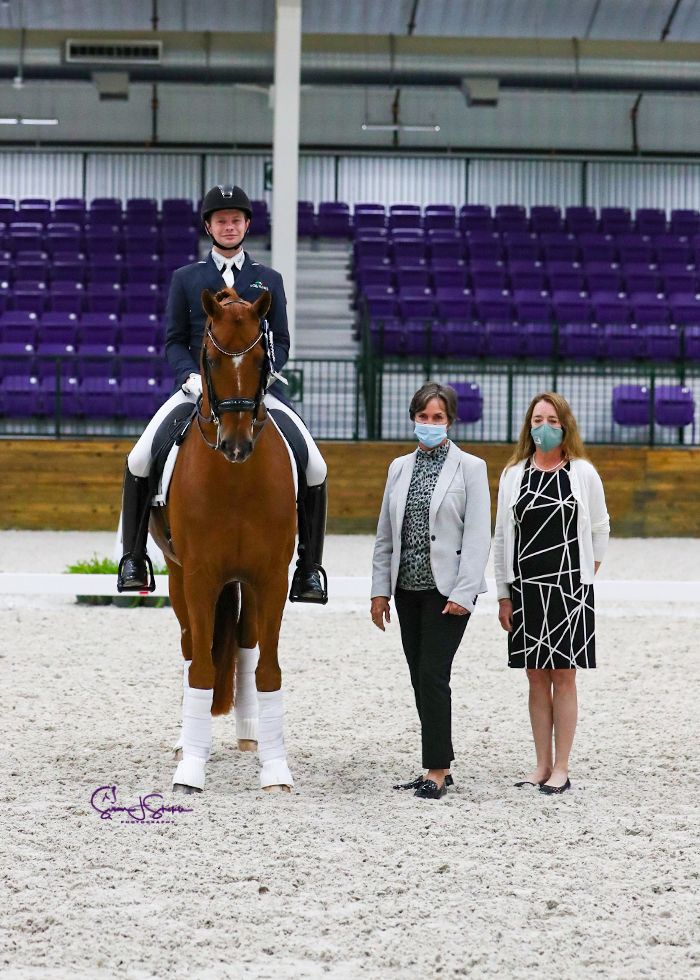 Kevin Kohmann and Five Star in their presentation with judge at C Kari McClain and show manager Debra Reinhardt.
Photo by SusanJStickle.com

The World Equestrian Center Dressage III CDI3* continued on Saturday, April 17, with the highlight class of the week, the FEI Grand Prix Freestyle CDI3*. With a bright routine set to the music of the television show “Glee” that received a score of 75.065%, Shelly Francis (USA) and Danilo landed atop the podium out of 13 entries in the class. In Small Tour, Kevin Kohmann (GER) and Five Star made it two in a row, winning the FEI Intermediate 1 CDI3*. The World Equestrian Center Dressage III CDI3* concludes on Sunday, April 18, 2021.

Francis and Danilo, a 17-year-old Hanoverian gelding by De Niro 6 x Andiamo 28 owned by Patricia Stempel, helped the U.S. Dressage Team take the bronze medal at the 2019 Nations Cup CDIO5* in Aachen, Germany in 2019 and competed at the 2018 FEI World Cup Dressage Final in Paris. The pair took the 2020 competition year off not only due to COVID, but also because Danilo was recovering from injury.

After a few shows this winter, Francis brought the veteran to World Equestrian Center – Ocala to keep him fit, and it paid off.

“He was much better for the grand prix [yesterday], and I was really happy with him tonight,” she said. “He’s 17, so he’s older and it takes a little longer. He’s starting to feel like his old self. He feels happy and like he wants to do it, so I’ll keep going. Next year if he feels spunky like this, maybe I’ll make an attempt for World Cup again. I won’t push him hard, and he’ll let me know.”

While Francis has used this freestyle for many years, she did make adjustments such as new entry music and choreography changes.

“I added two double pirouettes to make it tough,” she explained. “He’s very handy. The music helps me and keeps me in rhythm too. He really likes the freestyles, and I have fun with them. I’ve had this music for a while, and I’ve changed it a lot over the years. I kept most of the choreography the same. It’s kind of unique, and I like that.”

While Francis brought students to the national shows this winter, this is her first time competing at World Equestrian Center – Ocala.

“It’s just lovely here,” she said. “This is the best facility in the world.”

For her freestyle victory, Francis won her choice of a catered cruise or a day of deep-sea fishing for four from CaptiveOne Advisors aboard their 62-foot Viking yacht, “Reel Captivating.” The award was presented by Olga Hartsock and Miranda Van Kol of CaptiveOne Advisors.

Click here to watch the winning freestyle test for Shelly Francis and Danilo!

Second place finisher Catherine Haddad Staller (USA) echoed the sentiment. Two years ago, Haddad Staller visited the grounds as part of the United States Equestrian Federation Board of Directors and was pleased to see it come to fruition.

“As far as infrastructure goes, this is the best venue in the world that I have ever competed at,” she remarked. “I absolutely mean it. I was a little worried because my horse has never competed indoors with me before, but there are indoors and there are indoors. This is not an indoor! It reminds me a little of the Tempelhof in Berlin, where they held a big indoor show one year. It had huge hangars. It’s this feeling of space; you feel like you can get on your horse and just fly. The lighting, the climate control, the footing, it’s just fantastic.”

Haddad Staller rode Frankie, a 12-year-old Hanoverian mare by Florencio 2 x A Jungle Prince that she owns and bred herself to a score of 73.530%. Through a pipeline training program in her stable, Haddad Staller had young riders learning to become professionals that worked with Frankie throughout the horse’s career, leading to many wins including the USEF Prix St. Georges Developing Championship in 2017. Haddad Staller took over the ride and in the last year, the mare has become a top competitor.

She was extremely proud of her homebred mare that was competing in its very first freestyle.

“I’m very excited about the future with this horse,” said Haddad Staller. “It’s her first year at grand prix and this was her very first freestyle tonight. She’s gone from understudy to leading lady in the playbook of my life. She is the number one horse in my stable, and she knows it now.

“I wasn’t sure if she’d be able to rise to the occasion because [this freestyle was originally for] a much bigger-strided horse, but when she heard the music and I pushed her a little bit, she covered ground and floated,” she said of the freestyle that included a compilation of music from the performer Pink. “It felt like a magical moment for the two of us.”

Similarly, third-place finishers Mikala Munter (USA) and Salsa Hit, a 12-year-old Oldenburg gelding by Samba Hit III x Riverman-ISF owned by Evi Strasser, were competing in their second freestyle ever and received a score of 71.945%.

“I didn’t even try it national first,” she noted. “He’s a very green grand prix horse, and he had his first CDI grand prix this winter. I was trying the Intermediate A and 2, but I wanted to try and see if we could step up to the grand prix in the CDI. He was like, ‘Yep, okay!’ We did a couple of Specials.

“I wanted to see if we could put the freestyle together that I’ve had in my head for a while,” she continued. “I put it on paper, and I knew it had to be Frank Sinatra because that horse is Frank Sinatra, all the way through. I knew it from the first day I rode him. At the same time, it’s a tribute to my dad who is a huge Frank Sinatra fan. I’m so glad that he got to watch it.”

Munter described Salsa Hit as “spicy Salsa!” and while they have taken their time to get to the grand prix level, Munter feels it is where the horse wants to be. With strong scores in their first two freestyles and a high degree of difficulty in the test, Munter thinks it will be “very, very good” to come in the future.

Kohmann and Five Star Make It Two In A Row

Kohmann and Five Star won the FEI Intermediate 1 CDI3* with a score of 73.627%. While they won by two percentage points, Kohmann felt their test could have been better.

“Today was not as good as yesterday unfortunately,” he admitted. “He got a bit nervous going around the ring. He was not quite himself. He was still good; he is always good. Tomorrow will be better. He was already back to being relaxed [at the prize-giving].

“It’s still fresh for us to go to other facilities,” continued Kohmann. “I’ve really only shown him in Wellington and then one time in Ocala.”

Kohmann noted that the 11-year-old KWPN stallion’s strengths are the extended walk and extended canter.

“He loves to do everything forward,” said Kohmann. “He loves to move big and do lateral work. Normally his zig-zags are very good. Our pirouettes are still a work in progress, but it’s getting better. The scores are going up for sure. He likes everything else very much.”

The pair will aim for their third win in Sunday’s FEI Intermediate 1 Freestyle CDI3*. “I look forward to the loud music and lots of power!” said Kohmann with a smile.

The World Equestrian Center Dressage III CDI3* will conclude on Sunday, April 18, with the FEI Intermediate 1 Freestyle CDI3* at 8 a.m. and the FEI Grand Prix Special CDI3* at 10 a.m., along with a full schedule of CDI and national competition.