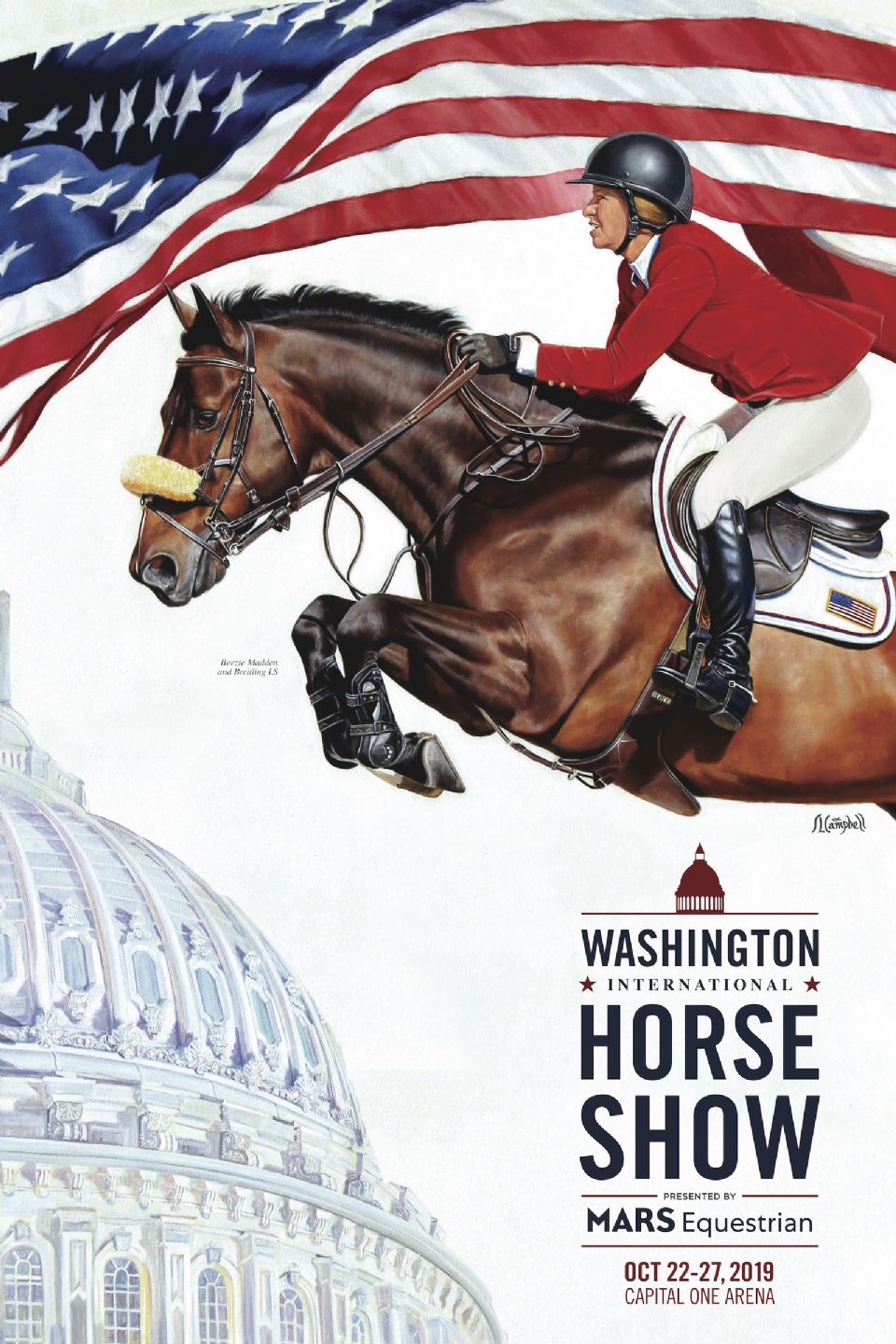 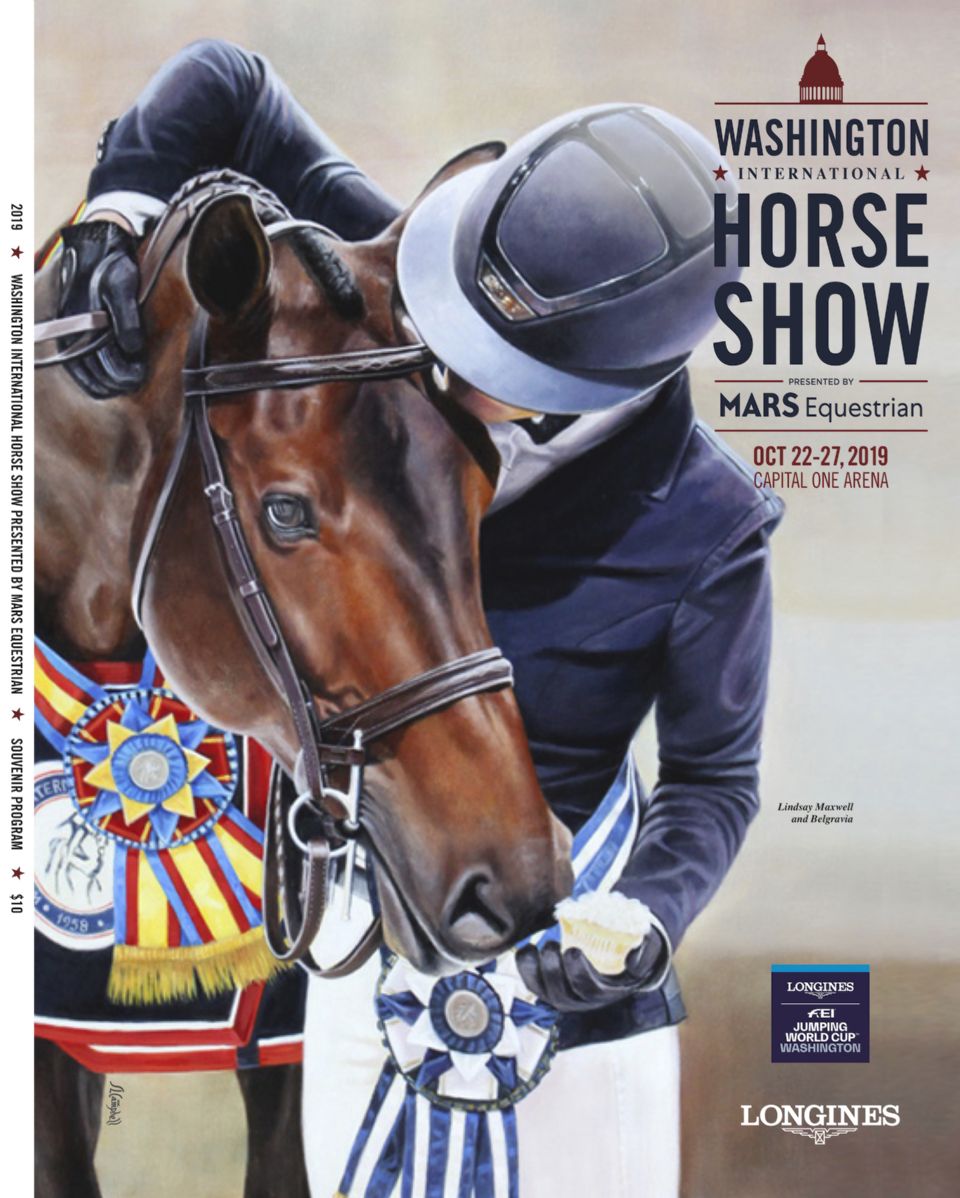 Esteemed equestrian artist Sharon Lynn Campbell has unveiled the official artwork for the Washington International Horse Show (WIHS), presented by MARS EQUESTRIAN, running from October 22 through 27, 2019, at Capital One Arena in the U.S. capital city of Washington, D.C.

Campbell is a self-taught talent who first picked up a paintbrush 20 years ago. She has been providing the official artwork for WIHS since 2015. She began her creative process in February when she and WIHS President Victoria Lowell embarked on flipping through the many iconic photos snapped at WIHS in 2018. They looked for something uniquely “Washington” and settled on two photos to inspire Campbell’s oil paintings.

The first, a jumping image of two-time U.S. Olympic team gold medalist Beezie Madden and her mount Breitling LS by Jump Media photographer Simon Stafford, was selected for the official poster artwork for WIHS 2019. Winners of the previous year’s $136,300 Longines FEI Jumping World Cup™ Washington, presented by Events DC for the President's Cup, the duo made the perfect subjects.

“What I love about painting for the Washington International Horse Show is that is because of the subject, I get to use colors that I don’t usually use in traditional portraits,” said Campbell, who is always searching for an artsy pose that lends itself well to the creation of a WIHS-inspired piece. “I chose the horse first and then used the form and movement of the flag as the background. Then, I painted a depiction of the U.S. Capitol Building.

“Many people, when they look at the piece, think the building was added in, but I painted it,” continued Campbell. “I spent a lot of time counting windows! I used three to four colors to make it stand out, but not be overbearing.”

For the second piece that Campbell created, she wanted to find something that conveyed an intimate moment between horse and rider for the event program cover. The selected image, taken by Jump Media photographer Emily Riden, portrays a celebratory moment between hunter rider Lindsay Maxwell and 2019 Grand Amateur-Owner Hunter Belgravia. Together, they shared an iconic Georgetown Cupcake on their way out of the arena.

“I chose that particular photo because those cupcakes are such a part of Washington, and it made for a really a cute moment,” said Campbell, who hails from Madison County, VA, and will be onsite at WIHS to showcase the original artwork. I put everything I have into every single piece, and I love seeing people enjoy the artwork when I visit the show.

“I love the people I get to work with on these projects and being a part of the event,” continued Campbell, who is a rider herself and showed in the 1980s. “WIHS is such a special event for the city of Washington, D.C., and I love being able to experience it.”

WIHS will continue a longstanding tradition as one of the world’s most celebrated indoor horse shows in 2019 and again host the $136,300 Longines FEI Jumping World Cup™ Washington for, presented by Events DC for the President's Cup, with coveted qualifying points on offer for the 2020 Longines FEI Jumping World CupTM Final taking place in Las Vegas, NV, in April. Additionally, WIHS will welcome qualified hunter, jumper, equitation, and pony riders from across the nation and celebrate year-end titles, including the coveted Lindsay Maxwell Charitable Fund WIHS Equitation Finals.

Tickets for WIHS are available online on Ticketmaster.com, at the Capital One Arena box office or by calling 1-800-745-3000. For group discounts, contact Capital One Arena Group Sales at 202-661-5061. For more information on tickets and discounts for military, seniors and students, visit WIHS.org/tickets.