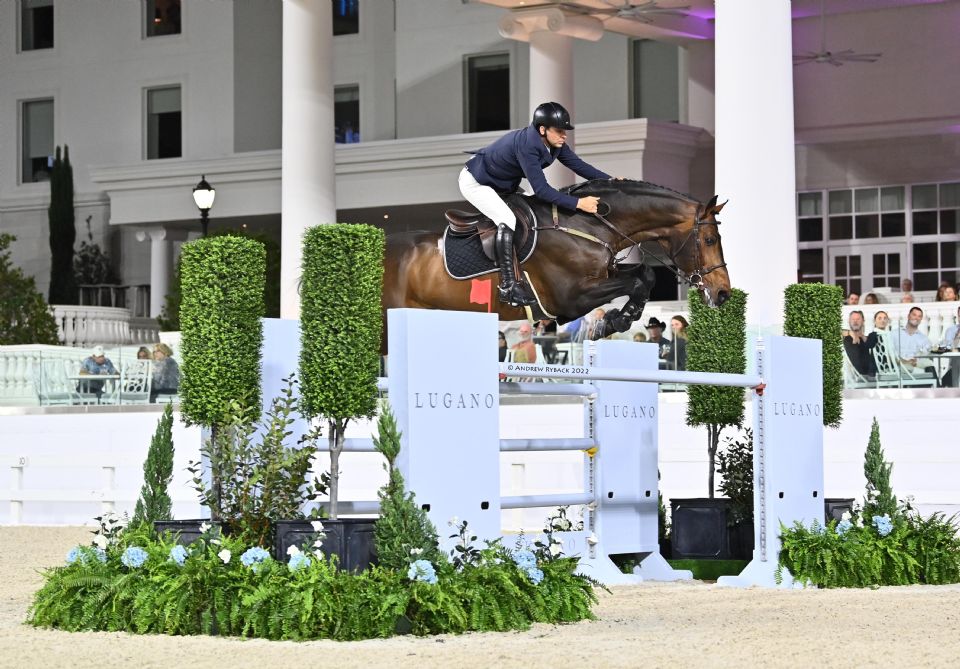 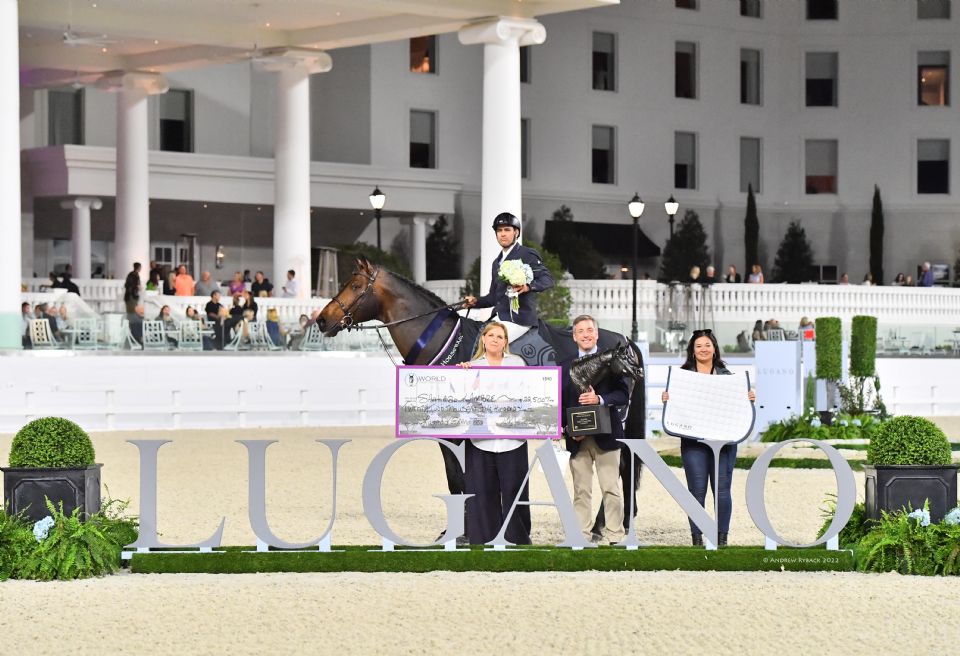 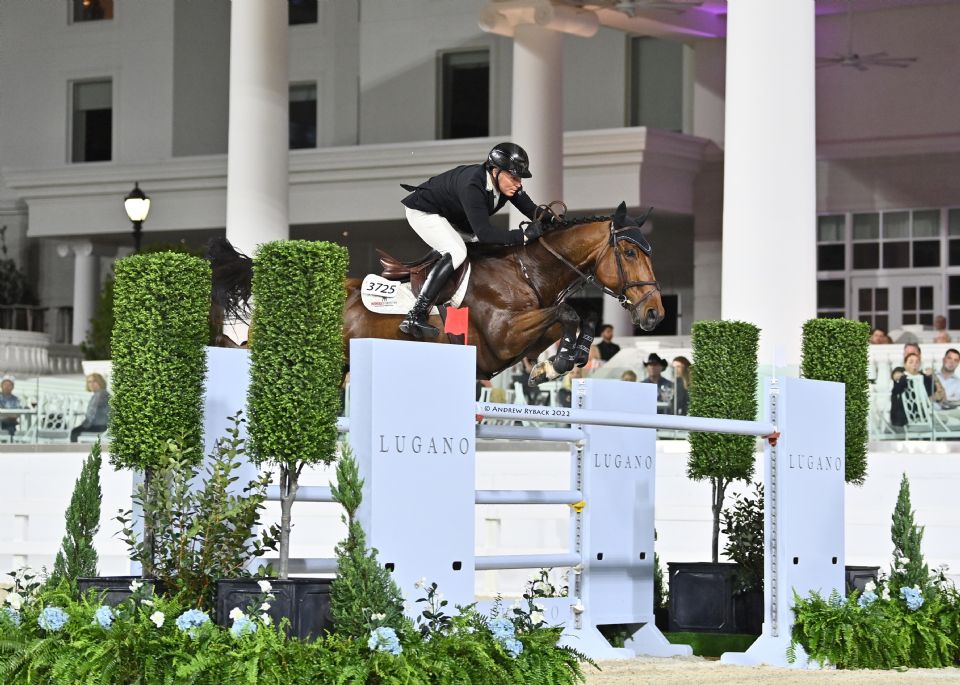 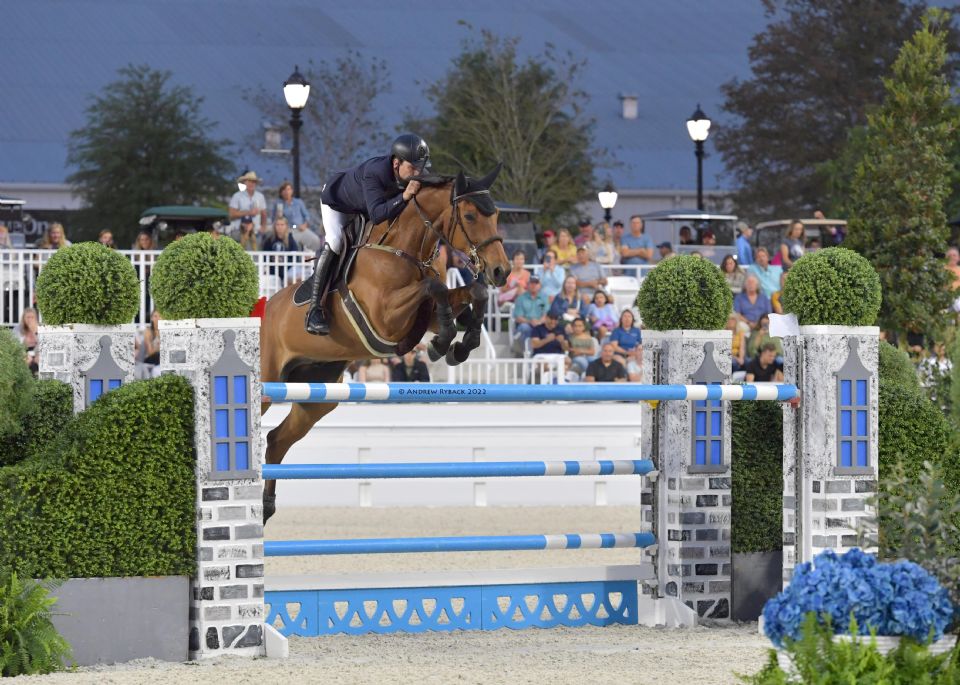 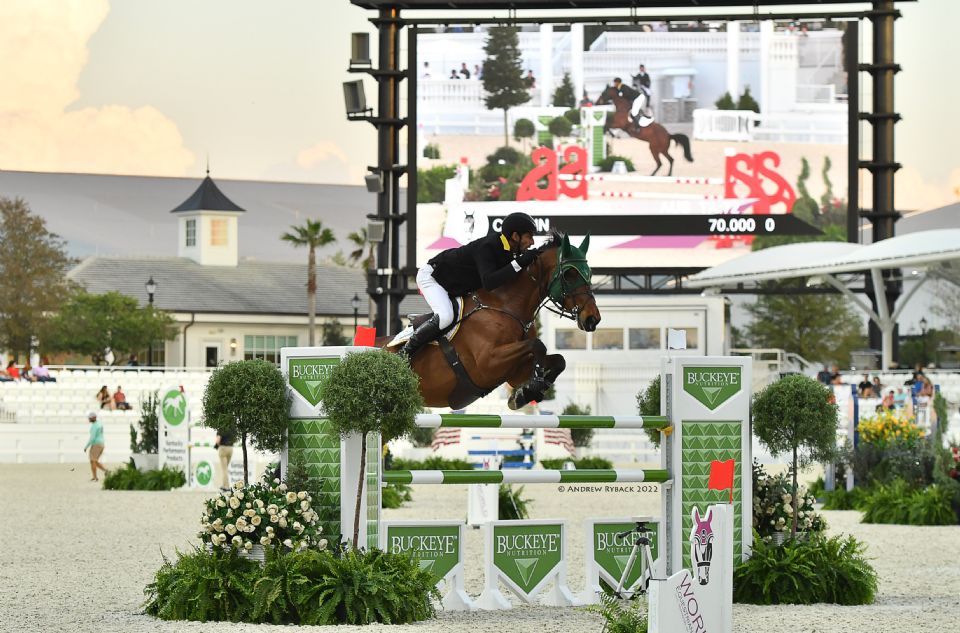 Santiago Lambre (BRA) piloted his own Chacco Blue II to victory in the $75,000 Lugano Diamonds Grand Prix under the lights in the WEC Grand Arena on Saturday, March 19, 2022, at World Equestrian Center – Ocala during the Winter Spectacular XI show. An international field of 41 competitors competed over the technical first-round track designed by Alan Wade (IRL), and only three combinations jumped clear to claim a spot in the jump-off. Lambre and the 15-year-old Oldenburg stallion were the last to return to the jump-off and produced a second fault-free ride with a quick time of 41.153 seconds to take the top prize by a two-second lead.

“Sharn [Wordley] was smart to stay more conservative to leave the rails up,” explained Lambre. “Chacco Blue II isn’t a very fast horse. I tried to go quick in the beginning so I could steady toward the end. He’s blind in his left eye, so I can’t make tight left turns, but I was able to stay out after the Coca-Cola jump to slice the chapel fence very nicely.”

Sharn Wordley (NZL) rode Quincy Too, owned by Fernando Cardenas Jr., to second place with a time of 43.310 seconds. Lambre also took home third place honors with his own Cetano Van Aspergem Z after stopping the clock at 39.597 seconds but having an unfortunate rail at the last fence.

Rowan Willis and Copain, owned by Peter Moore, were victorious in the $10,000 Buckeye Nutrition Futures Prix for the second time during the 2022 Winter Spectacular Series on Friday, March 19. Alan Wade designed an intricate course where only six of the 49 starting horse-and-rider combinations jumped clear to advance to the jump-off under the lights in the WEC Grand Arena. Willis and the 11-year-old gelding went early in the class and proved unbeatable when they stopped the clock at 35.808 seconds.

“It was an Alan Wade course, and he didn’t let us have an easy part,” laughed Willis. “The time allowed was very tight. I luckily just made it within the time, and I usually don’t have a problem with time on Copain. He jumped super.”