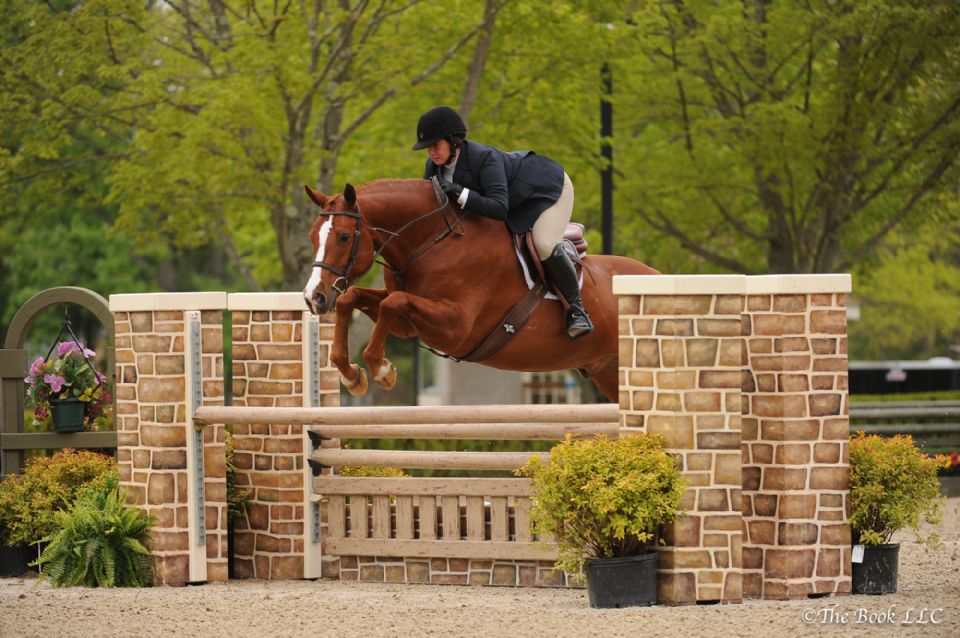 Samantha Ruttura and Quinn.
Photo by The Book LLC 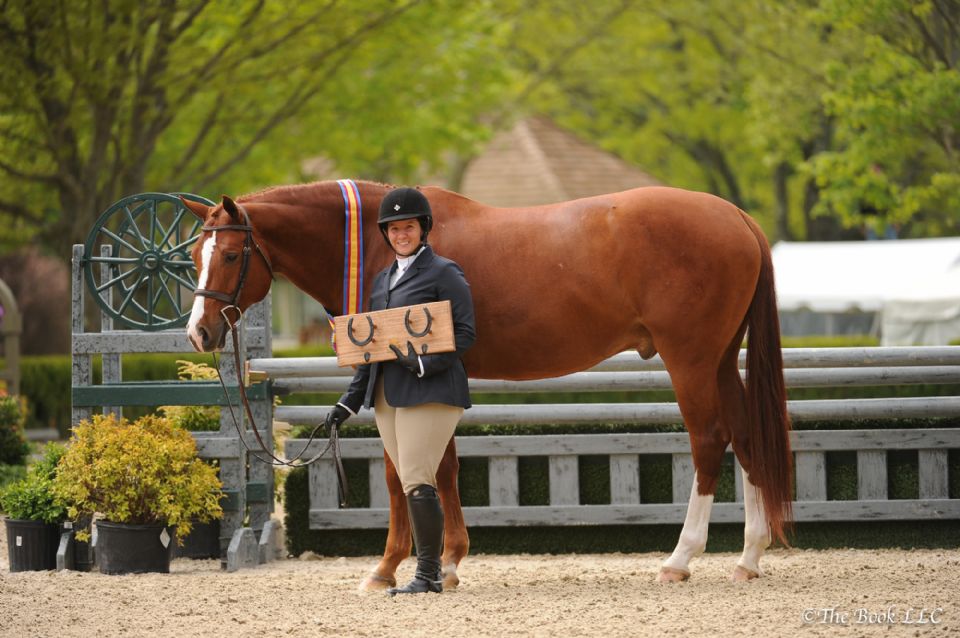 Samantha Ruttura and Quinn in their winner's presentation.
Photo by The Book LLC 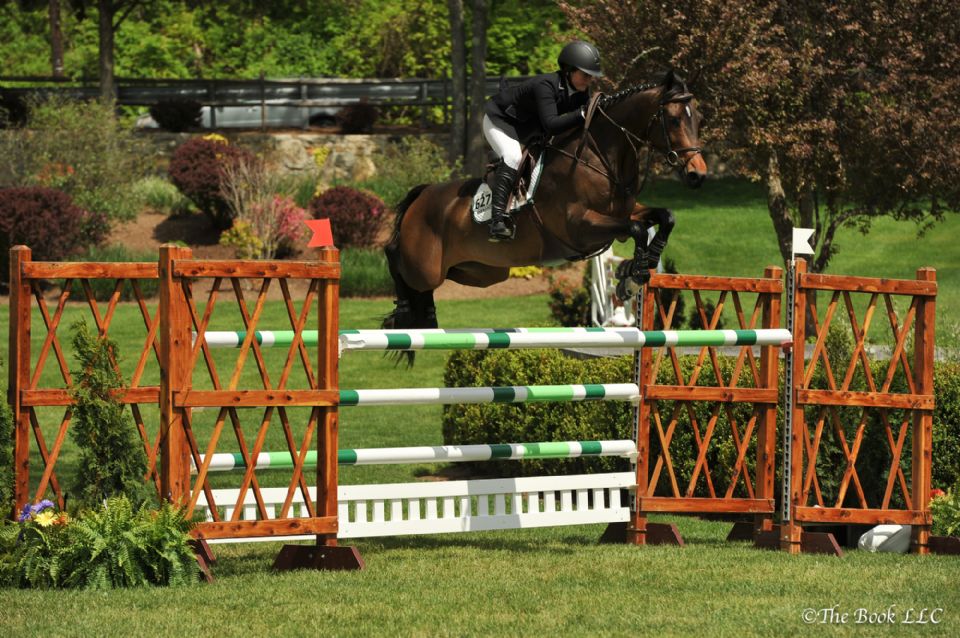 Christina Firestone and Arwen.
Photo by The Book LLC 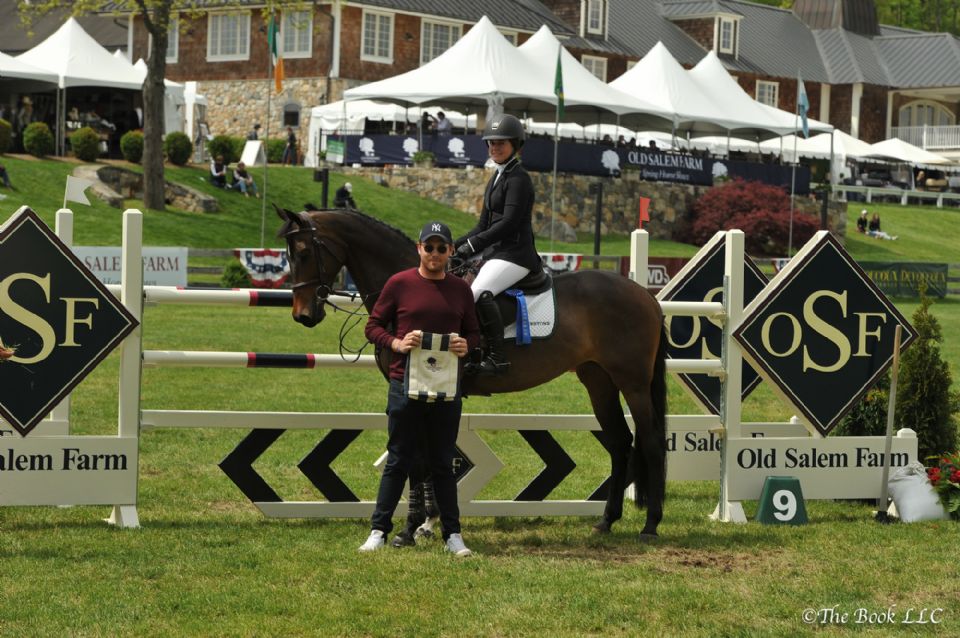 Christina Firestone and Arwen in their winner's presentation with Rob Gray of T & R Development.
Photo by The Book LLC

Samantha Ruttura, 28, of Lloyd Harbor, NY, and her own Quinn were named Grand Adult Amateur Hunter Champions after topping the 18-35 Division on Thursday at Old Salem Farm Spring Horse Shows, running through May 22 at Old Salem Farm in North Salem, NY. On the Grand Prix Field, 20-year-old Christina Firestone won the $5,000 Under 25 1.45m, presented by T & R Development, aboard Arwen for Mr. and Mrs. Bertram Firestone.

Ruttura is coming off a season of change with a new trainer, new horse, and newly restored confidence. She recently made a move back to the Northeast, after spending several years in Tennessee and Florida, to begin training with Louise Serio. After suffering a sports injury not related to riding over the winter, she found that she was lacking confidence in the show ring. Serio set out to find her a horse that would help her bounce back and added Quinn to her string.

“I needed something to bring me back, and Quinn did that. He comes out the same every time,” said Ruttura. “I am still getting to know him, but he's sweet, quiet, and has such a good brain. I never dreamt that we would have done this at our first horse show together.”

Week one of the Old Salem Farm Spring Horse Shows was Ruttura's first time in the show ring with Quinn, and the eight-year-old Brandenburg gelding had three wins over fences and a third place ribbon under saddle for their division and grand championships.

“He is very straight-forward and excited to go in the ring every time,” said Ruttura. “I think he really enjoys what he's doing, and he's a dream to ride. It puts a smile on my face every time.”

Ruttura hopes to move Quinn up to the 3' hunter derbies over the summer and be competing in the 3'3” amateur division by the start of the 2017 winter season.

Ruttura was a regular competitor at the Old Salem Farm Spring Horse Shows in her early yeas as an amateur, but this year marks her first time back after moving home to New York.

“This has always been one of my favorite horse shows, and it's nice to come back and do so well,” she said. “The facility is beautiful, and the prizes are great. It makes you feel appreciated when a show cares enough to have nice prizes for the winners. Years later when I pull out a bag with Old Salem Farm on it, it stirs up memories about how great my horse was that day or how much fun I had.”

Reserve champion honors in the Adult Amateur Hunter 18-35 Division were presented to Kaile Rudy and her own Coltrane after winning the under saddle and topping one over fences class. They were also second, third, and fourth over fences to take reserve.

Christina Firestone (USA) of Wellington, FL, and Arwen, an 11-year-old Dutch Warmblood mare, were the fastest pair in an immediate jump-off on Thursday to win the $5,000 Under 25 1.45m, presented by T & R Development. They stopped the clock in 31.919 seconds for the win. Juan Salgado (MEX) and Hector V.D. Papendijk were second for owner Alejandro Zendejas in 32.567 seconds, while Stephen Moore (IRL) and Team de Coquerie, owned by Teddy Vlock Show Stables, took third in 35.941 seconds. Madison Goetzmann (USA) and her own Wrigley were fourth with a four-fault jump-off round in 31.486 seconds, and Mattias Tromp (USA) rounded out the top five aboard Triomphe Z with four faults in 33.289 seconds for Beyaert Farm, Inc.

Friday's class represented the introduction of Under 25 competition at the Old Salem Farm Horse Shows. The class was added to the 2016 schedule in an effort to give young riders a division to help advance them from the junior divisions to the grand prix level. Firestone has competed in Under 25 classes in Florida and was pleased to have the opportunity again at Old Salem Farm.

“These events give our age group a new division to show in instead of having to turn professional as soon as we turn 18,” said Firestone, who is a junior at Lynn University majoring in Environmental Studies. “It's nice to compete against people at my level, but the classes are always tough enough so we can experience the bigger heights without having to compete against the professionals.”

Arwen is a homebred mare bred by her owners and Firestone's grandparents, Mr. and Mrs. Bertram Firestone. The mare came back to showing over the winter after a tendon injury sidelined her for a year.

“I started riding her when she was seven, and she had only jumped 1.20m at that point. We never thought she was going to jump big jumps, but continued to impress us as she got older,” said Firestone. “We grew up together, and I like how hot and competitive she is. She's always game when she walks in the ring and gives it her all every time.”

Firestone, along with her fellow Under 25 riders, will now turn her focus to the $15,000 Under 25 Grand Prix, presented by T & R Development, taking place on Saturday.

The Grand Prix Field will continue Open Jumper competition with the $6,500 Open Jumper 1.35m on Friday before the $35,000 Grand Prix of North Salem takes the stage at 1 pm.