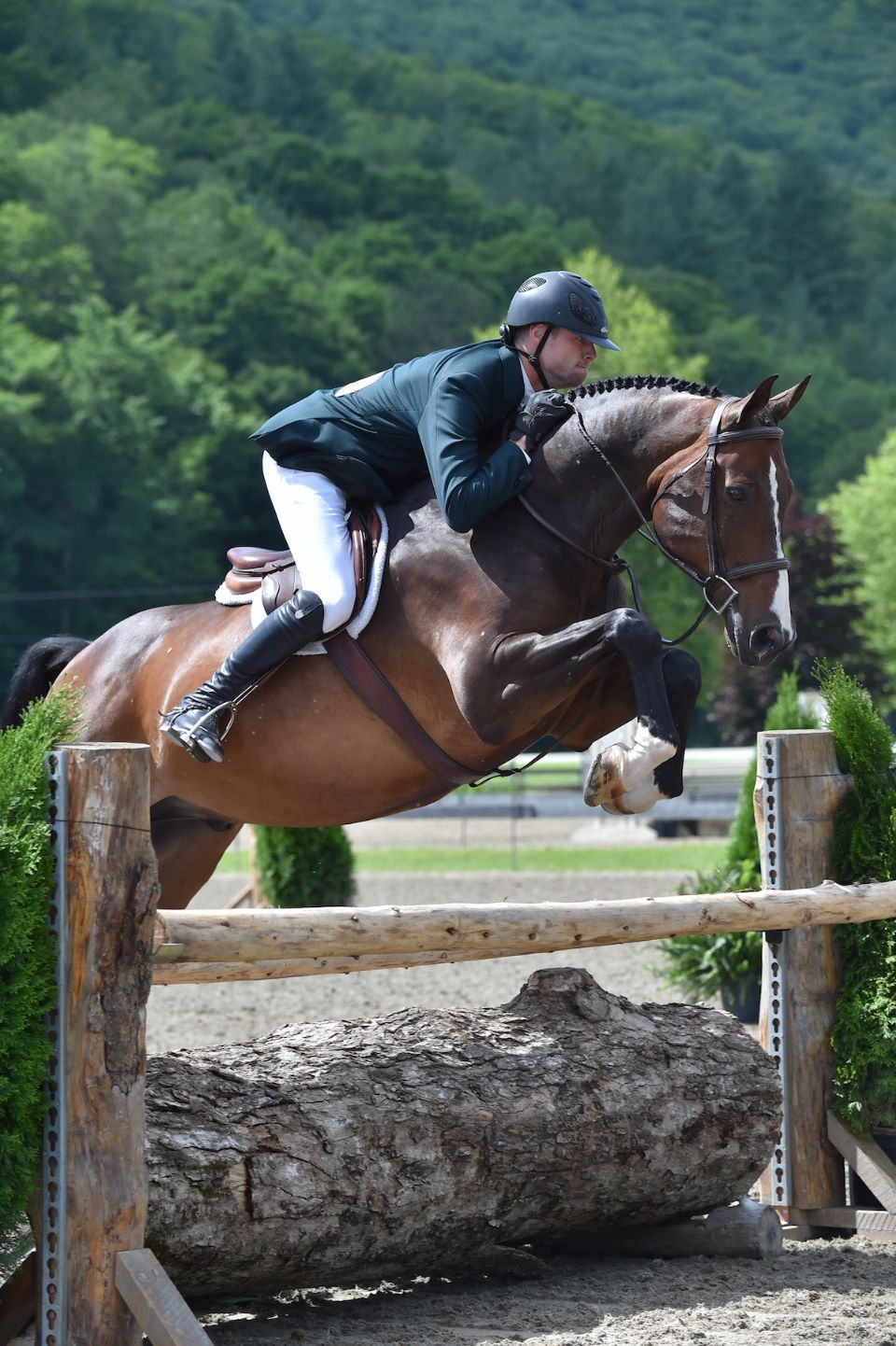 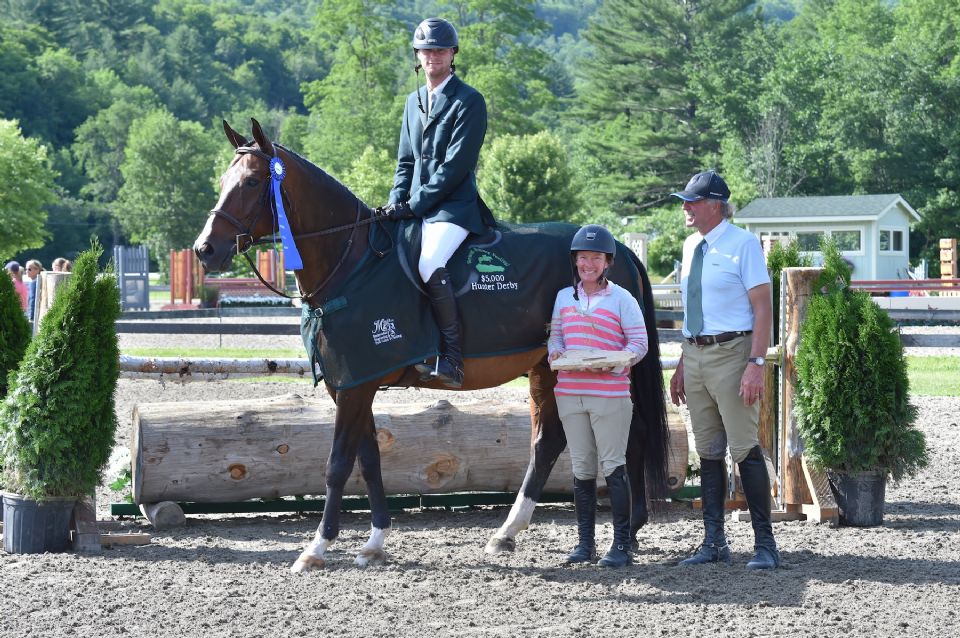 Robert Lee and Cameron, pictured with trainers Mark Jungherr and Kristi Smith, are presented as the winners of the $5,000 NEHJA Performance Stake Hunter Derby, presented by Eastern Hay, during the opening week of the Vermont Summer Festival.
Photo by David Mullinix Photography

In the first of six weekly hunter derbies held throughout the circuit, Lee guided Cameron, a 16-year-old Dutch Warmblood gelding (Omnistar x Olina) owned by Marianne Huss, to the win. The pair earned consistent scores of 85 and 87 in the opening round and handy round, respectively, for a total of 172 to best a starting field of 28 entries.

The track, set by Joe Cornicom, spanned two competition rings and incorporated both contemporary hunter-style fences as well as natural obstacles. Following the first round, the top 12 entries returned in reverse order of standing for a handy course, which again utilized both rings. Lee and Cameron were sitting in second after the opening round, giving them the opportunity to watch ten trips before they entered the ring.

“He's a really straight forward horse and I was confident going in,” said Lee who trains with Mark Jungherr and Kristi Smith at Cedar Brook Farm in Madison, CT. “Mark has had him in the barn for years and everyone who rides with us has ridden and shown him – he's a packer.”

Lee put Cameron's experience to good use, negotiating the tight turns and trot fence included in the handy round with ease to again finish with the second-highest score. The only rider with a higher score than Lee in the second round was Shachine Belle of Farmington, CT, riding Sarah O'Connell's Silvio Song. Their high score of 88, combined with an 81.5 from the first round for 169.5, earned second place overall, and Belle was also awarded the Kastel Denmark Style of Riding Award for her pristine performance.

Lee and Cameron have been partners since December, and they competed in the 3'3” Hunter Prix series at HITS Ocala, Florida, over the winter.

“I haven't done a handy course on him in a while, but he really likes the derby-style jumps,” noted Lee. “He hasn't shown since Ocala, so he was really sharp and on it.”

Lee hasn't competed at the Vermont Summer Festival since his junior days, but was happy to be back at the venue.

“I enjoyed showing here then and it's even better now,” he said. “The style of jumps, especially in this class, are always nice, so it keeps the horses interested and paying attention.”

Following Lee and Belle, Meghan Kaupp of Pittsford, NY, riding Samantha Rice's Uniek scored a pair of 79s for a total of 158 and third place. Fourth was awarded to Emma Schauder of Greenwich, CT, aboard Tracy Hart's In The Loop after an 81 and 74 delivered a final score of 155. Sara Sprague of Richmond, MA, capped the top five with Judith Sprague's Cheaper To Rent on scores of 77 and 75 for a final total of 152.

Many of the $5,000 NEHJA Performance Stake Hunter Derby competitors, including Lee, already have their sights set on the final week of the Vermont Summer Festival, which culminates with a $15,000 offering on August 6.

Competition at the 2015 Vermont Summer Festival runs weekly from Wednesday through Sunday, beginning each day at 8 a.m. Admission is $6 for adults and $3 for children from Wednesday through Friday. On Saturday and Sunday, admission is $9 for adults, $5 for children. 100% of the gate proceeds benefit area libraries, including Manchester Community Library. This weekend will feature the $30,000 Vermont Summer Special Grand Prix, presented by Johnson Horse Transportation, on Saturday, July 4 at 1 p.m.