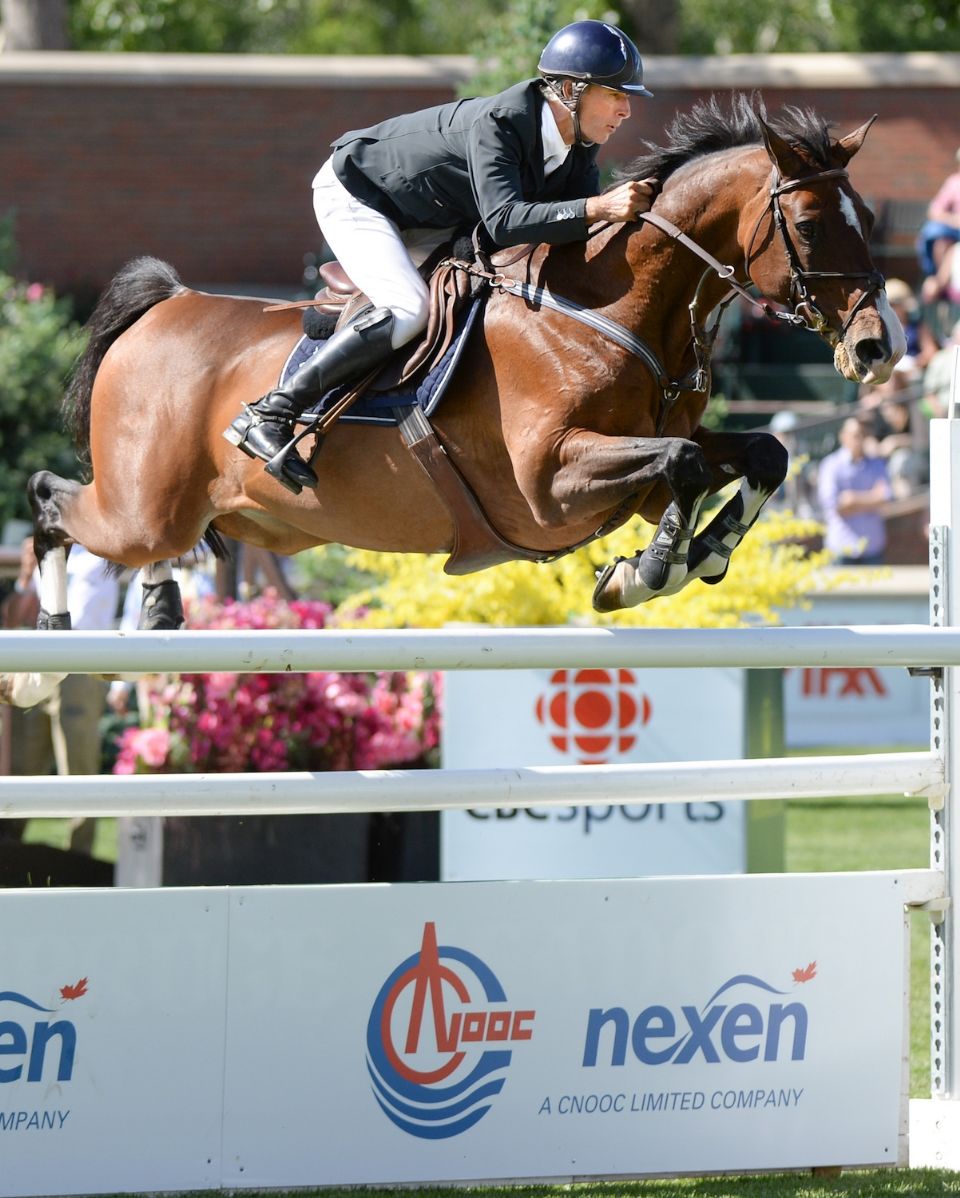 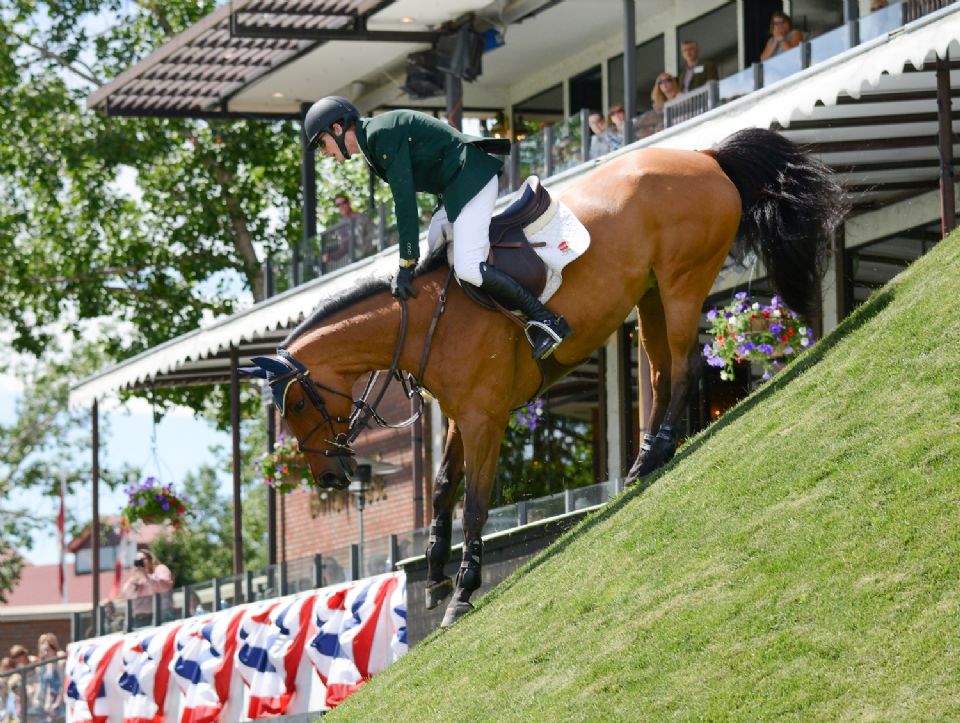 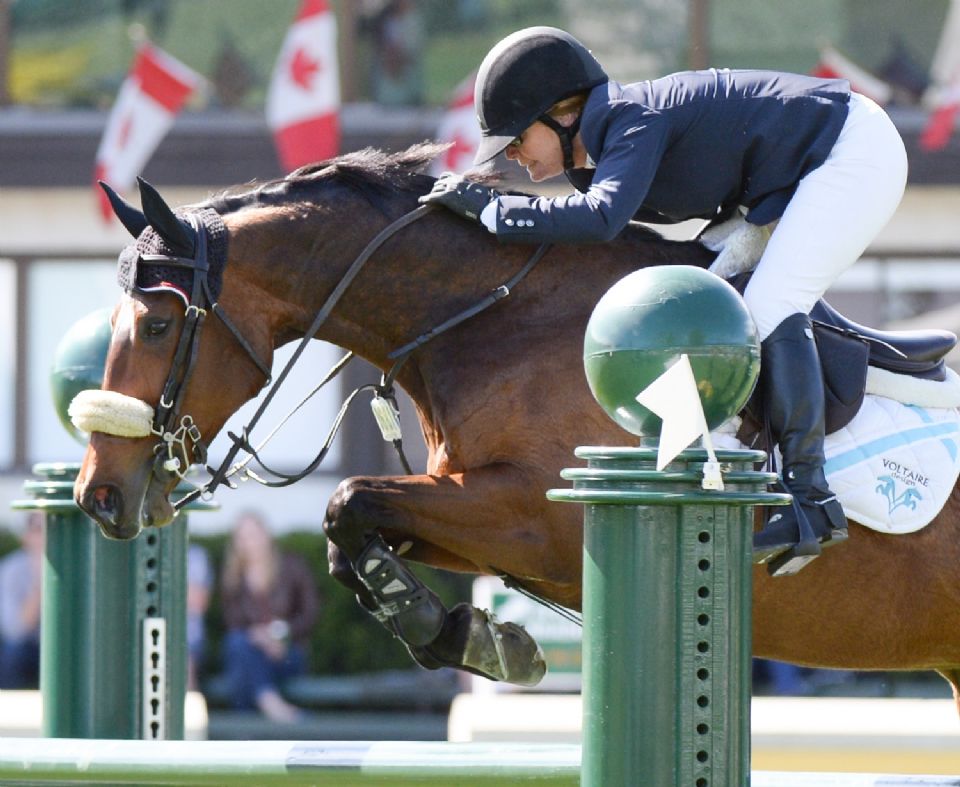 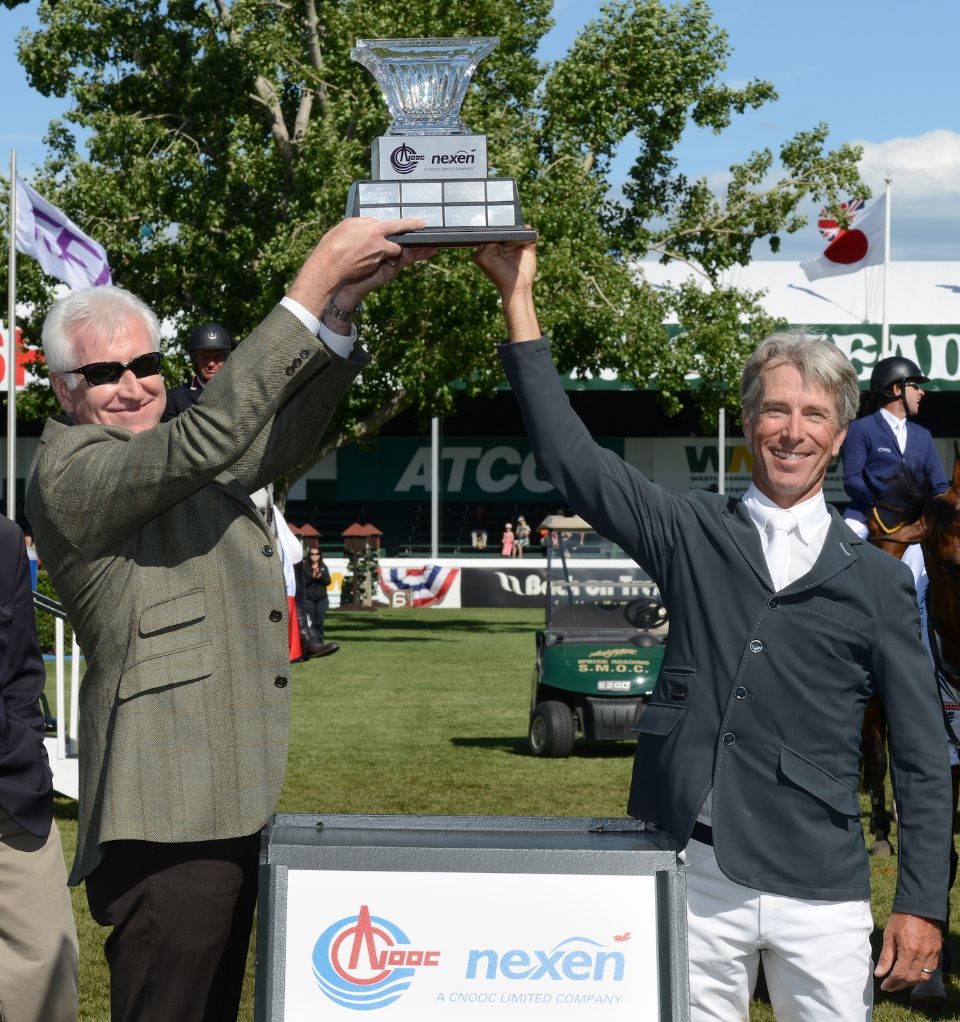 Richard Spooner will have his name on the trophy for the third time, as he celebrates with Patrick McVeigh Sr., Vice-President, Exploration and International Development.
Photo by Spruce Meadows Media Services 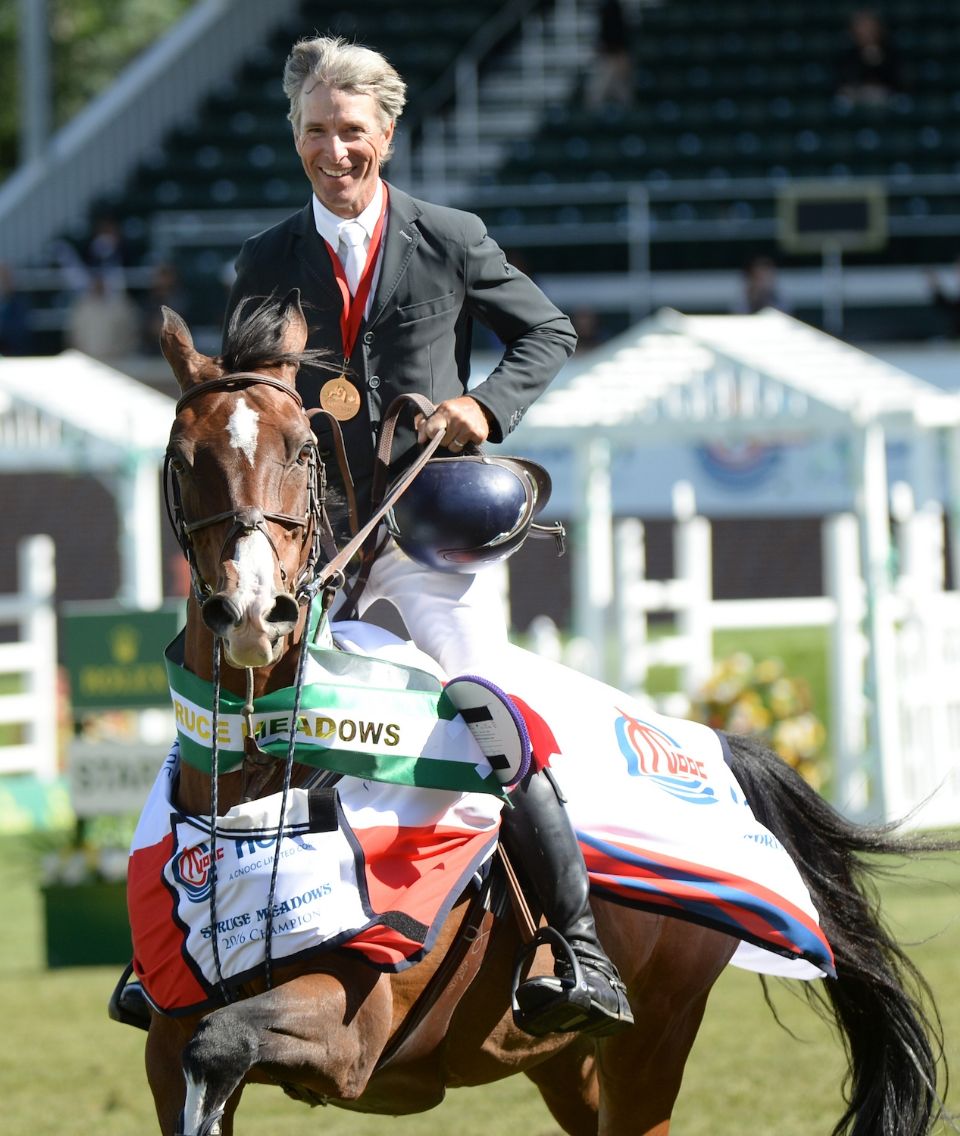 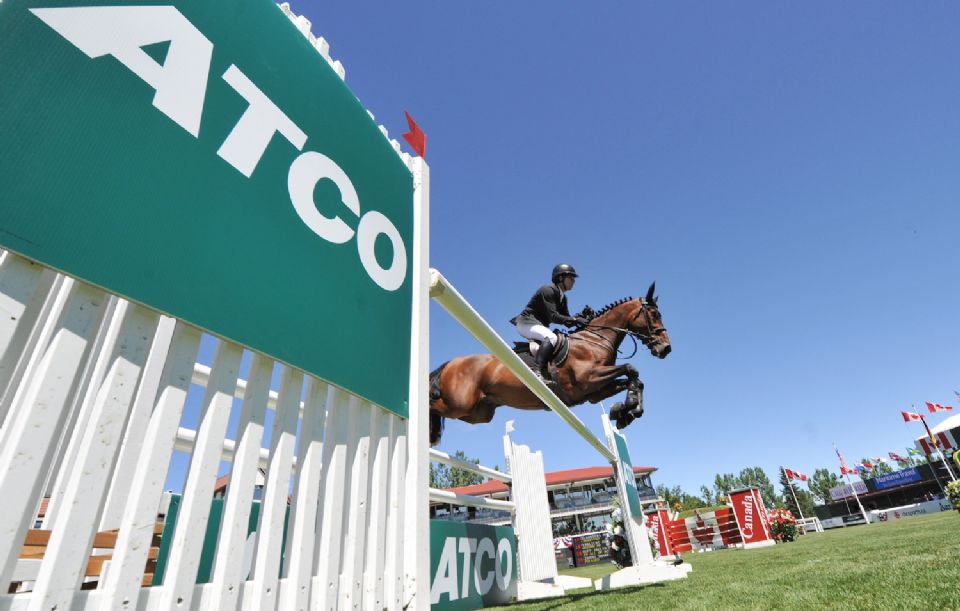 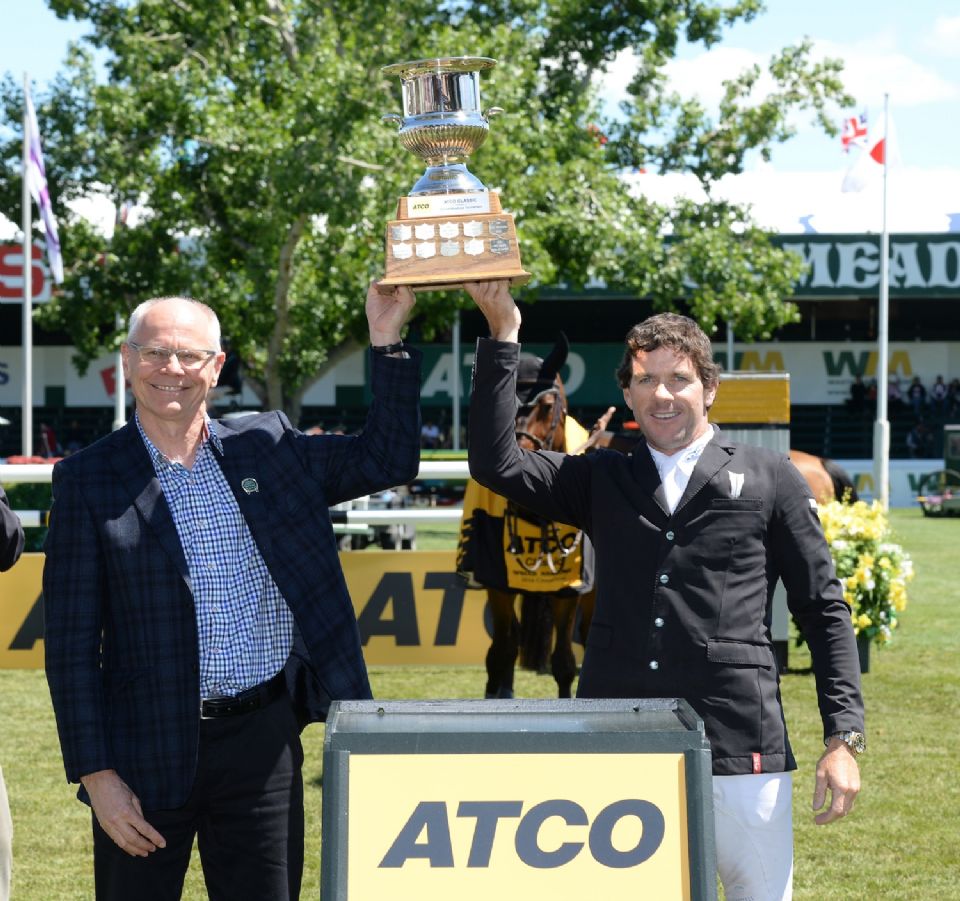 One of the most challenging competitions at the Spruce Meadows Summer Series, the CNOOC Nexen Cup Derby always has plenty of drama for spectators. Today was no different as Richard Spooner (USA) and Cristallo won for the second year in a row and third time in their careers. Lisa Carlsen (CAN) and Worlds Judgement finished second, while Daniel Coyle (IRL) and Ridley were third.

CLICK HERE to watch highlights from Sunday at the 'National', presented by Rolex!

There were 15 entries in the CNOOC Nexen Cup Derby, and 12 completed the course. The course, which was designed by Leopoldo Palacios nine years ago, is the same each year. The test of endurance and stamina asks questions at a variety of jumps, including double liverpools, the table bank, the derby bank, and the Devil's Dyke. There are 19 numbered obstacles and 25 jumping efforts on course. While the derby has been held since 1990, the course changed in 2007. Since then, there have only been three clear rounds.

The early pacesetter was Irishman Daniel Coyle on Ridley, a 10-year-old Canadian Sport Horse gelding (Ustinov x Adiantus AS) owned by Susan Grange. They just missed joining the jump-off as they had four jumping faults and one time fault in 166.91 seconds. They would finish in third place.

Coyle only recently traveled to the United States for a job through Conor Swail and Barry O’Connor, so his relationship with Ridley is a new one. But he has experience in derby competition, having competed in the Hickstead Derby for the last three years.

“I never won it or came close to winning it, but I always loved doing it,” he said of the Hickstead Derby. “I actually hadn’t planned to jump this class on the horse. We thought maybe it would be too much for him; he’s only nine and only just getting to this level. When I heard there wasn’t an awful lot in it, I said we might as well try. It’s his type of thing. He’s so quiet and does absolutely everything you ask of him. He’s a brilliant horse for these types of classes. He’s a real trier; he’ll try every time. I’m really glad now that we jumped him in it.”

Eleven trips later, it was Lisa Carlsen and Worlds Judgement, a 13-year-old Dutch Warmblood mare by Judgement, a horse that Olympic gold medalist Beezie Madden rode to victory in this same event three years in a row in 2006-2008. Their four faults in the first round in 158.74 seconds put them into the lead.

When asked about Worlds Judgement’s lineage, Carlsen remarked, “She’ll eventually win it three times too, I think. She’s going to live up to her father. This is her class. It will be in the future. I think she’s just going to learn as she goes a little bit. She’s made the mistake at that Devil’s Dyke (twice). Last year we came in too fast and had it in front, and this year it was slow and we had it behind. She keeps learning as she’s doing it. I think eventually I’ll be sitting there (as the winner) and Richard will be sitting here.”

Spooner and Cristallo went last and had a rail for four faults in 162.45 seconds to tie Carlsen and force a jump-off.

Carlsen and Worlds Judgement returned for the jump-off first and had electric speed from the start. In a short rollback to the “Canadian flag planks” jump, they had a slip, and the horse was unable to get her feet under her to clear the fence. They finished with four faults in a very fast 42.89 seconds.

“She really lost her balance in the corner to the plank, which was unfortunate,” Carlsen said. “But that’s the shot you take when you go that fast. [Richard is] fast; he could outrun me. My strategy was basically to make him chase me, go clean, and hope he makes a mistake.”

Spooner went in knowing that he could go slower for a clear round and the win, and that was exactly what he did. They were clear in 52.38 seconds for victory.

“When I watched [Lisa] go, I was sweating,” Spooner admitted. “I was deeply concerned as fast as she was going. It was not going to be so easy. I got lucky.”

Spooner described Cristallo as a bird in a horse’s body. He said, “All that horse wants to do is fly.

“Lisa left the door open for me by having the rail. I made the decision just to chicken-peck my way around and take my time. But if you have one down anywhere on the course with that strategy, your goose is cooked…I’m done with my fowl jokes,” he laughed.

Cristallo, an 18-year-old Holsteiner gelding (Caretino x Cicero) owned by Show Jumping Syndication Intl, shows no signs of slowing down as he repeated his derby victory at Spruce Meadows. They also won the competition in 2012, and competed for the first time in the CNOOC Nexen Cup Derby in 2006.

“On the ground he’s as sweet as can be, and he doesn’t want to go anywhere. When you get on him, he wants to go everywhere,” Spooner said. “In the prize giving, he basically ran away with me. I had to pull up so I wasn’t lapping my fellow competitors.”

The love that Spooner has for Cristallo is obvious and shows when he talks about the horse.

“That horse has meant so much to me and done so much for me,” he expressed. “At this point in his career, every time we have a round period, let alone a successful round, it really strikes a chord in me. He’s been a huge part of my life, my family’s life, for over a decade. I just look forward to every ride on him.”

Conor Swail of Ireland continued his streak of leading the victory gallop at the Spruce Meadows ‘National’, presented by Rolex, when he topped the ATCO Classic 1.45m with Cenzo, a nine-year-old Dutch Warmblood gelding (Harley VDL x Cavalier), owned by Ilan Ferder and Tal Milstein.

Swail was the last to go in a jump-off of 15, out of an original starting order of 39. The leading time was set early in the jump-off by Antonio Chedraui (MEX) on Corcega La Silla, who finished in 36.07 seconds. Swail and Cenzo sped around the course and won with a time of 35.56 seconds.

Swail had never gone that fast with Cenzo before, he said. “The plan was to run and try to keep it as smooth as possible,” he continued. “His left turn is not as good as is right, so the turn back to the Rolex (jump) I thought would be too slow for me to be the winner, but he actually did that quite good. I got a lot of time up to the last. He cut in and raced hard at it and jumped it really well.”

Third place went to Nayel Nassar (EGY) and Acita with a time of 36.61 seconds. Leslie Howard (USA) and Up & Blue Chapelle were fourth in 37.11 seconds, while Daniel Coyle (IRL) and Fortis Fortuna were fifth in 37.23 seconds.

Swail started riding Cenzo this past winter in the 1.30m Jumpers and had moved up to the 1.45m division by the end of the winter circuit. He competed in Mexico before trying his hand at Spruce Meadows.

“He’s got a little bit of mileage,” Swail said. “He’s a little bit difficult in the mouth, but very careful. He’s a good jumper. He scared himself a little bit in the 1.50m the last time he was out, so that was a great comeback for him.

Cenzo will stay competing at the Summer Series for the four weeks of tournaments to further his education and gain consistency.

“We want to improve the rideability,” Swail explained. “That’s why we’re here at Spruce Meadows, to try and collect prize money, jump clear rounds, and work on things that need to be improved. It’s a great place to be to do that.”

The Spruce Meadows Summer Series continues with the ‘Continental’ tournament on June 15-19.