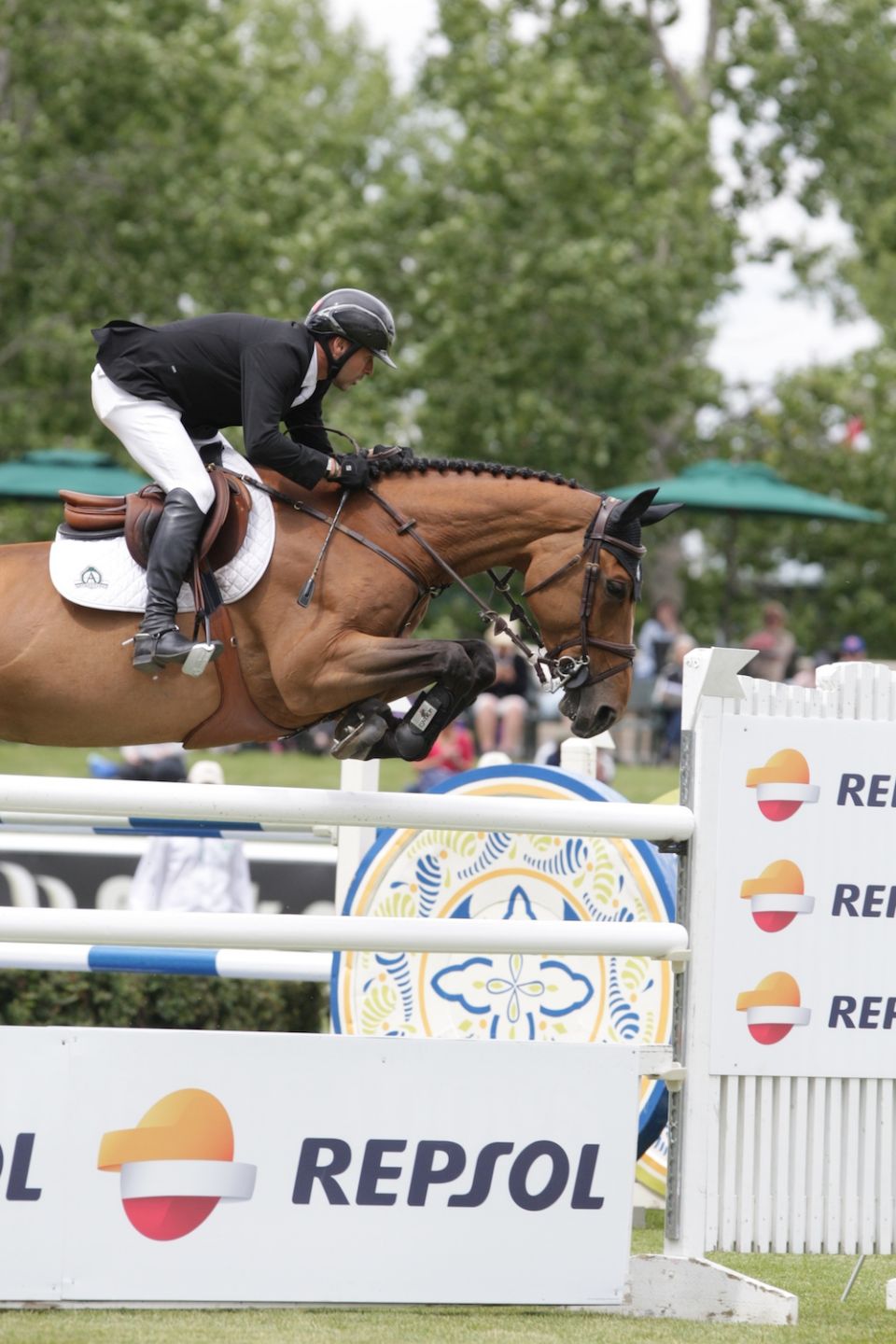 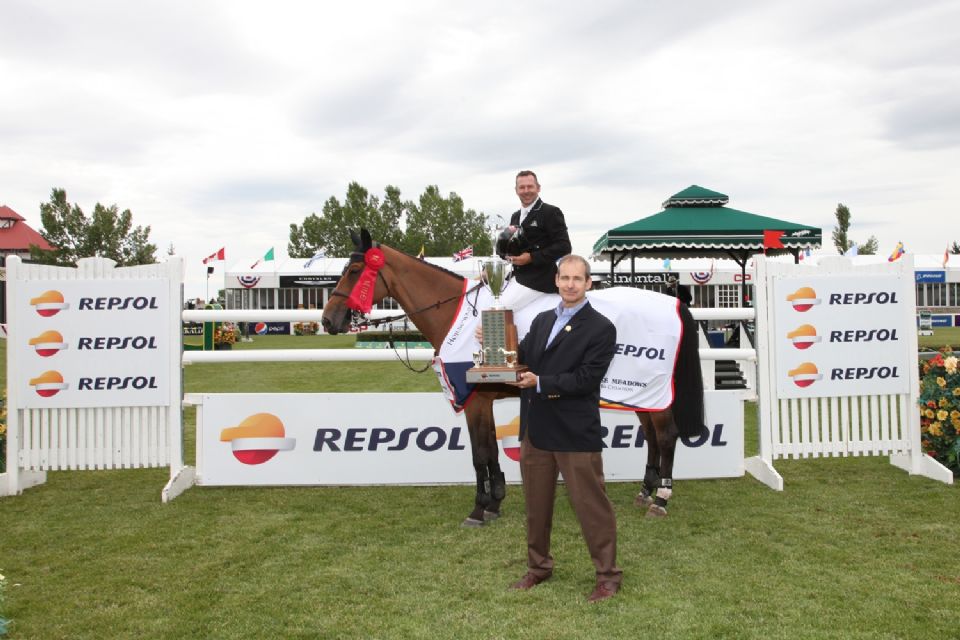 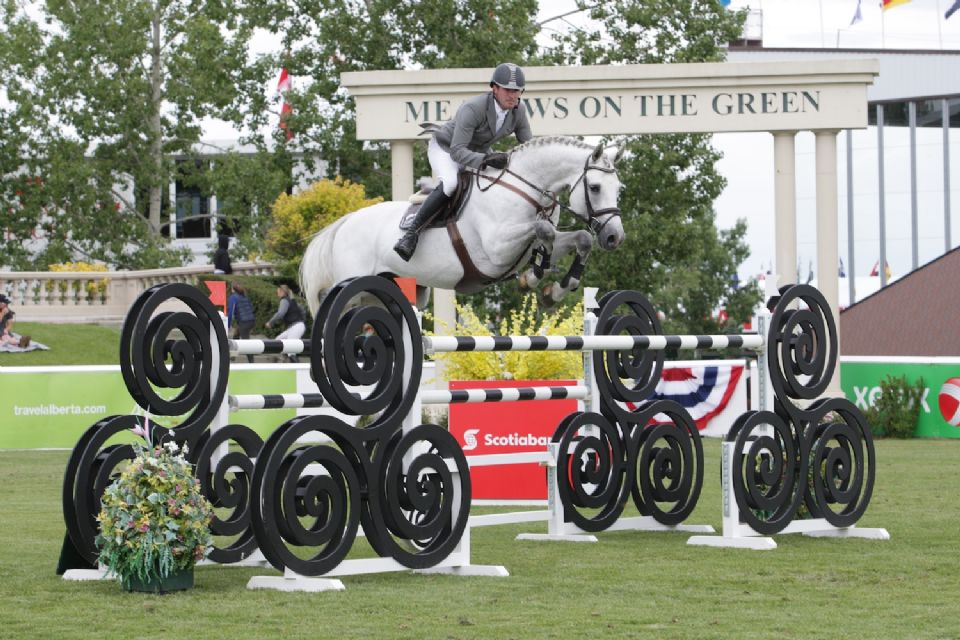 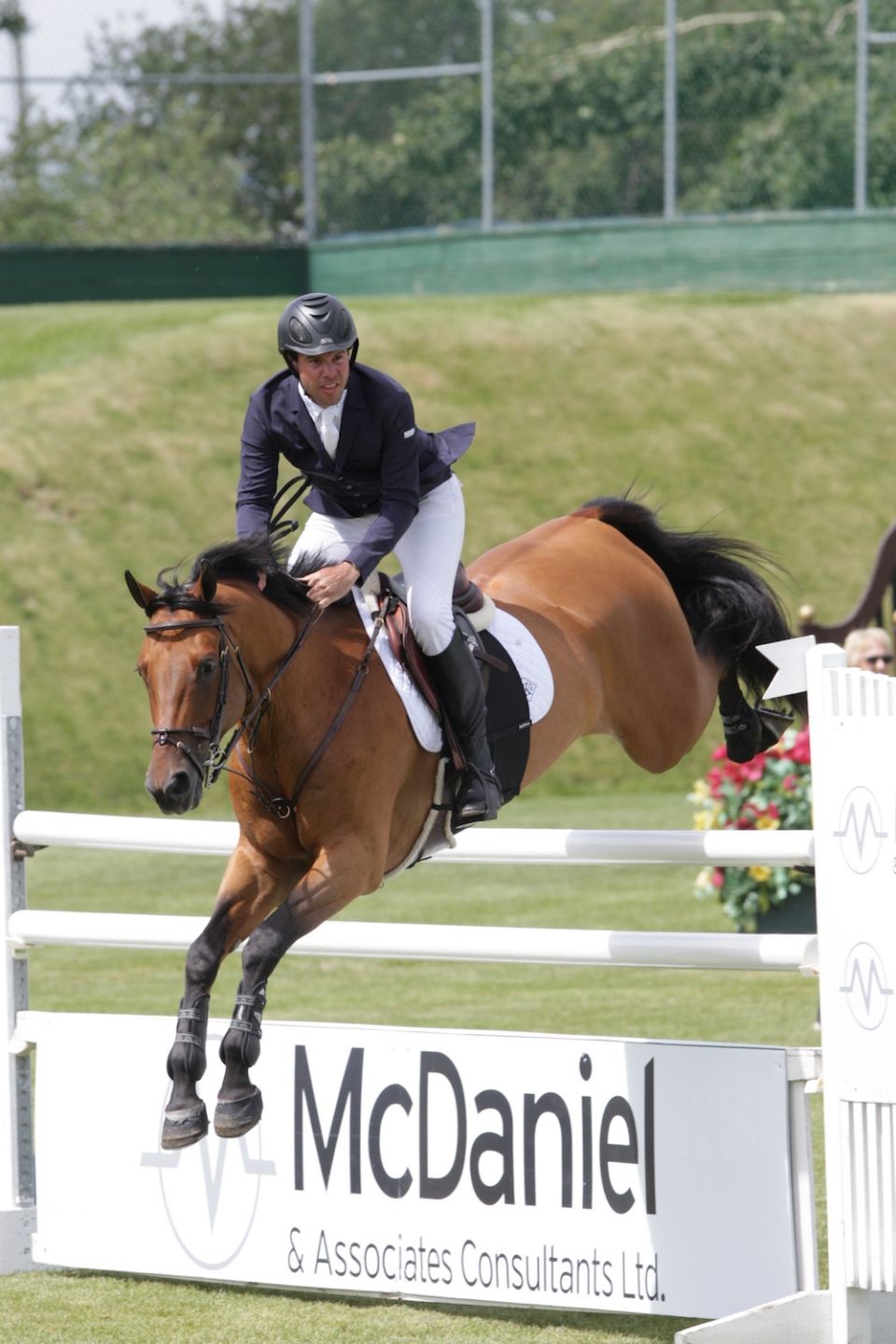 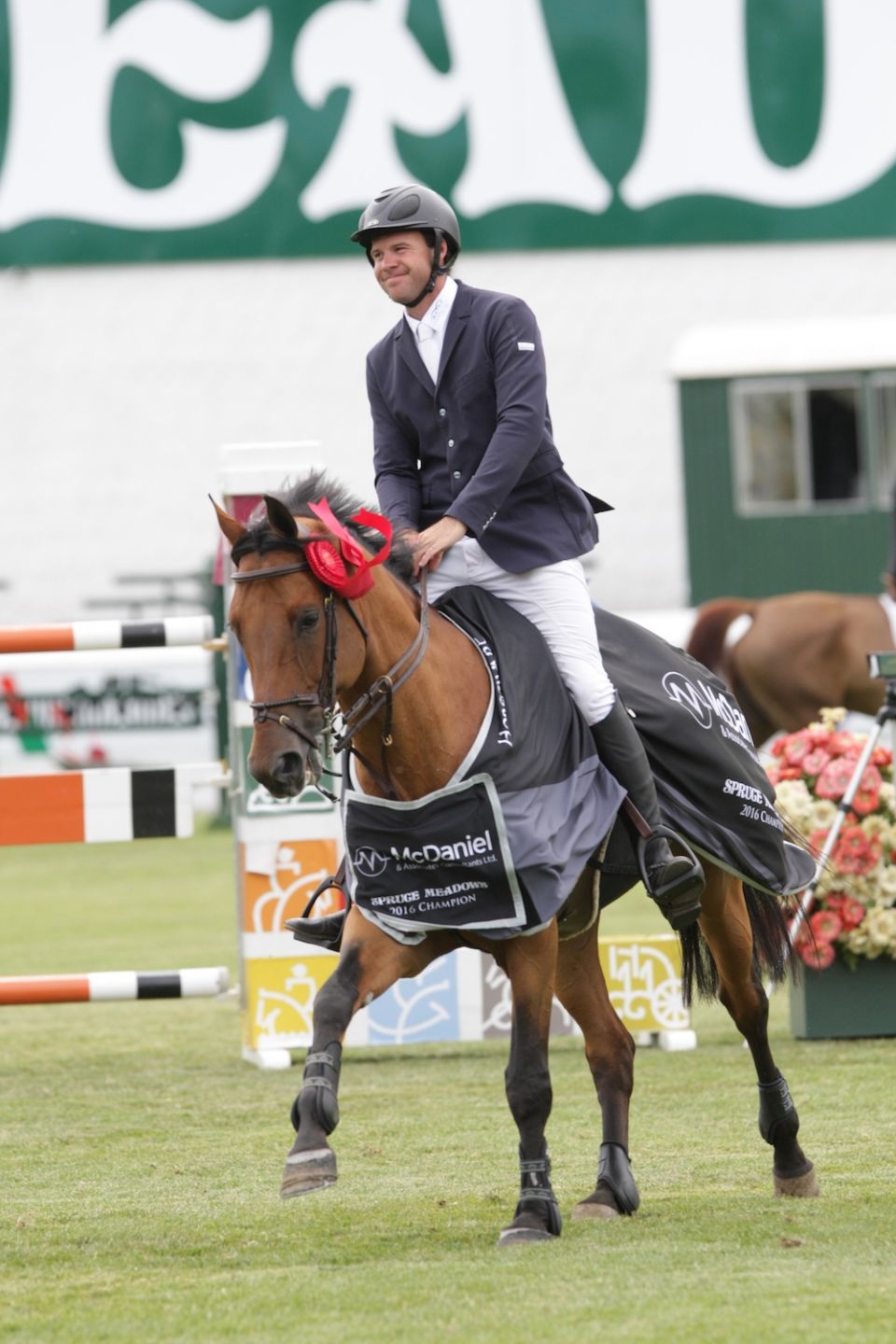 Join Spruce Meadows for a special Sunday Father’s Day at the ‘Continental’ Tournament! Highlighting the day is the CP Grand Prix, at 1 p.m. MST, and there will be the CP Mini Train, pony rides, mini golf, face painting, and ice cream. Don’t miss a special day for the family at Spruce Meadows and see top show jumping competition with complimentary admission.

The Repsol Cup had 40 entries, and seven of those found the clear path to the jump-off.  Five were double clear, and the pacesetter was Christine McCrea (USA) on Win For Life, who finished in 47.19 seconds for fifth place. Peter Lutz (USA) and Retiro finished fourth in 46.55 seconds. Kara Chad and Bella Strade took the lead in 45.06 seconds, but it would not last long as Philipp Weishaupt and LB Convall moved up in 45.02 seconds.

Last to go in the ring, Lamaze had the best chance to go for a win, and he said that he was “very confident” heading into the jump-off. He and Rosana du Park, an 11-year-old Selle Francais mare (Kannan x Quinine de Livoye) owned by Artisan Farms LLC and Torrey Pines Stable, took nearly two seconds off of Weishaupt’s time and won in 43.08 seconds.

“This was, not to call it an easy jump-off, but we didn’t have our usual racers with Hardin and Kent, and people who seem to be able to lay it down all the time,” he said. “Philipp’s horse is a very nice horse, but I don’t think it’s a super fast horse. Kara’s is a new horse for her. I had the champion of the runners.”

While Lamaze is known for his incredible ability to ride at speed, he admitted that being in a situation where he doesn’t have to go all out is not his forte.

He laughed, “I’m not great at that, to be honest. I’ve mostly managed to screw up [a situation like this] quite often! For whatever reason, I’m better at going fast and they say you gotta go. I’m not good at managing my speed. I feel like the whole course I’m going too slow. I’m better when you just have to go.”

Lamaze was proud of his student, Kara Chad, who placed third today and was second in the difficult Scotiabank Cup 1.55m yesterday.

“Spruce Meadows is really a venue that gives opportunity to younger riders to step up and do big classes,” he said. “This is where magic happens and where they get confidence. What that competition did for Kara last night is a huge boost. Who knows where it’s going to take her. I feel like everybody has a chance to have these moments here at Spruce Meadows.”


For Weishaupt, Spruce Meadows is also a special place to prepare a young horse. His new star, LB Convall, a nine-year-old Holsteiner gelding, came out strong this week. Having only ridden him for six months, Weishaupt found that he was good on grass.

“He’s not so experienced, and he’s quite green on that level. He has never jumped on grass,” he said. “He felt really, really happy on the grass field. I’m really happy with that because some of them don’t like it. He liked it from day one.”

Weishaupt said he knew he “had no chance” against Lamaze. He noted, “Eric’s horse jumped amazing. She has so much more experience and is a really quick horse. I didn’t want to go crazy because my horse is only nine years old. I did what I can do without risking too much and that worked out. I’m more than happy with my second place.”

Weishaupt feels that he has a very special mount in LB Convall. “He is, I think, I hope, my next championship horse. He’s the best I have,” he said.

Hardin Towell didn’t plan to even compete in the McDaniel & Associates Cup 1.45m, but when his barn manager Chris Howard entered New York and told him he was first in the ring, he gave it a go. A good go, in fact, as he was the first clear in round one and the first to return in the jump-off. They set down an unbeatable time of 40.80 seconds to win a wire-to-wire victory.

Coming close behind in second place was Eric Lamaze (CAN) on Melody des Hayettes, who stopped the clock in 40.97 seconds. Third place went to Molly Ashe (USA) and Balous Day Date, who were clear in 42.07 seconds. Finishing in 42.39 seconds, Alberto Michan (MEX) and Ujade Ste Hermelle were fourth. Fifth place was awarded to Jaclyn Duff (CAN) on EH All or None, who had a time of 42.99 seconds.

There were 50 entries in the first round, and 18 of those were clear to the advance to the jump-off. There were 11 double clears.

After a solid schedule of show jumping this winter and spring, New York, a 10-year-old KWPN gelding (Verdi x Watzmann) owned by Jennifer Gates LLC, was given five weeks off before coming to the Spruce Meadows Summer Series. Towell planned to have him as his grand prix horse during last week’s ‘National’, presented by Rolex, Tournament, and rode Lucifer in the lower competitions. It did not go as planned, and Towell felt discouraged heading into the ‘Continental’ Tournament.

“Last week he was really strong, and he didn’t jump great in the grand prix,” Towell said. “Every class he’s just been too fresh. This is his third day showing in a row. Last night he didn’t jump bad, but it was getting better.

“To be honest, I wasn’t showing until this morning,” he revealed. “I was arguing with Chris, my barn manager. Last night I was talking to him and he said, ‘I entered the 1.45m. You go first.’ Then we were arguing all morning and I didn’t even walk the jump-off (course). I got there, and it was nice. I could gallop and he really held off the jumps, which is good.”

Seeing how New York has been after a five-week absence from the competition, Towell has learned that he thrives on work and competing and will now adjust his schedule accordingly.

“I should just know that I need to show him more,” he said. “I gave him the week off before I came to Spruce Meadows, and I shouldn’t have. I should have shown him that week and then he would have been ready for last week.”

“Less is more” is something else that Towell learned today with New York. He said, “I think sometimes I complicate it. I try to do too much. This morning I didn’t even ride him. I just got on and went (in the ring). Sometimes we want to be so successful and we try to put too much thought into it. There are some horses that you’re just better off getting on and going.”

Towell was pleased with New York’s improvement and the feeling he gave him in this competition. He noted, “I’m happy with the win, but I’m really happy with how he jumped in the jump-off. He feels back to himself. He really tried hard and jumped well.”

While Towell may have been discouraged with some of his performances, he was thrilled with how his student, Jennifer Gates, did in the challenging Scotiabank Cup yesterday. She and Pumped Up Kicks had just one time fault and finished fifth.

“Last night Jennifer was amazing. She had a great result, and that was exciting,” he remarked. “The morale on my horses has been down a little bit, so that makes us feel a little better. I was really excited with how Jennifer did. As long as one of us is doing well, it makes things a little easier!”