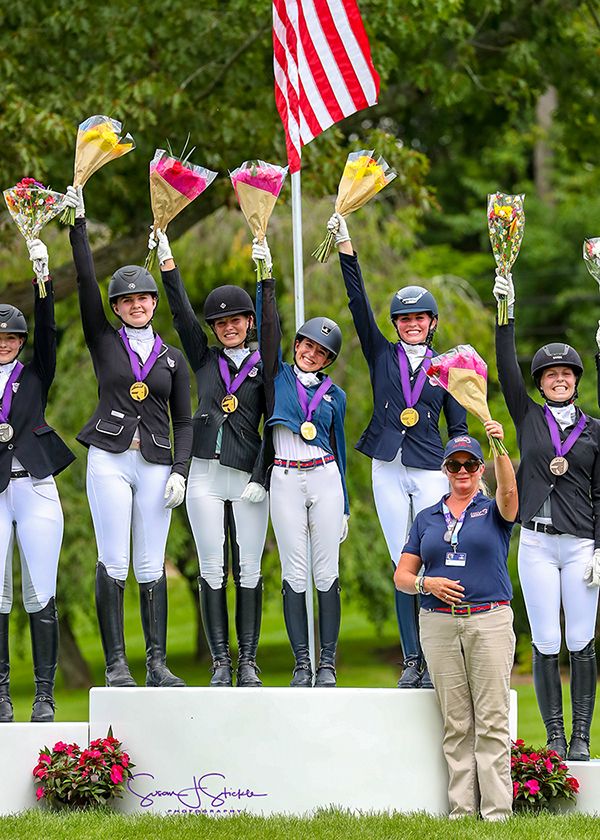 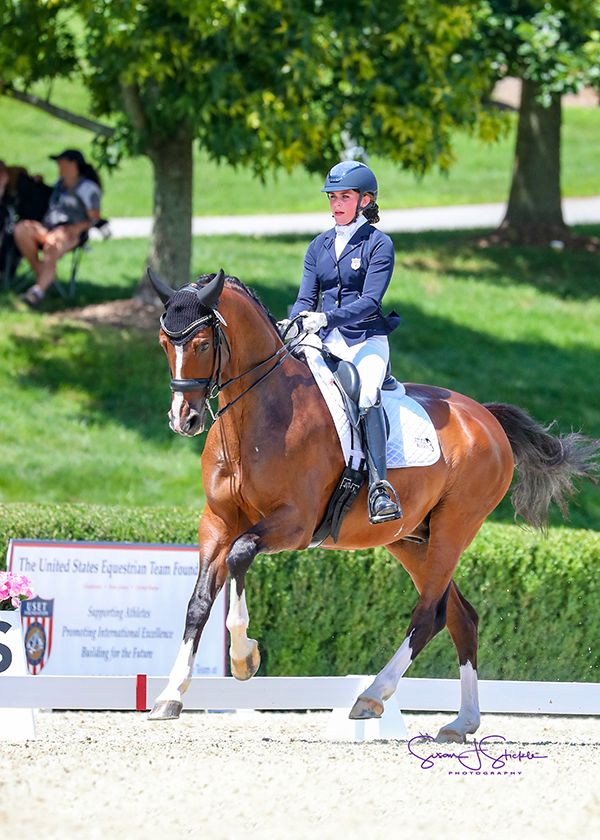 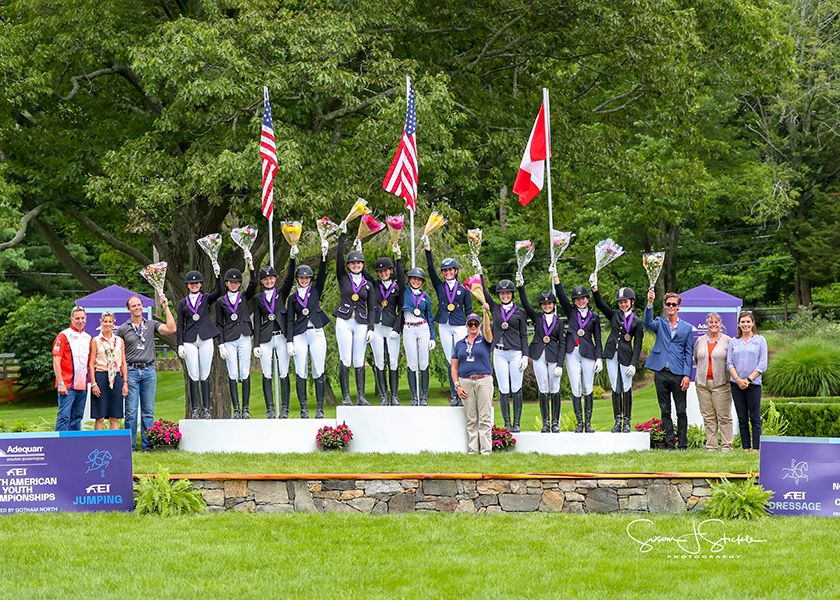 Medal winning teams on the podium.
Photo by SueStickle.com

All four riders on the Region 3 team claimed the top spot with a combined score of 202.78. The U.S. Region 4 team claimed silver with 199.36, just fractions of a point ahead of the Canada Central team that took bronze with 199.15 on the second day of NAYC on Thursday, August 2.

Competition was tight down to the last riders in the order, and Caroline Garren of Atlanta, Ga., kept her cool to ride Bell Angelo, a 10-year-old Hanoverian gelding owned by Caroline, Charles and Michele Garren, to the high score for her team (68.60%) to clinch the gold. “I was pretty nervous going last, but I was also excited because that’s traditionally a pretty good spot to go in,” said Garren. “I work with a really great sports psychologist, Laura King, and I was listening to some relaxing MP3s of her talking before I rode. That helps me really calm down and it helps me to go straight from listening to my ride. I just went in and tried to stay focused and in the zone.”

Garren, 18, also competed in the junior division of NAYC last year. “It’s so much fun to be able to come to NAYC and be with all these other young riders and have such a good time competing,” she said. “I was very happy with the canter aspects of the test and that went smoothly. I wasn’t thrilled with my geometry, so that’s something that I’ll look at for the following days of competition.”

Juliette Cain, 18, helped boost the team to gold with her 67.87% score riding her own Mariska, an eight-year-old Friesian mare, in her first NAYC appearance. “I can’t believe I’m here,” said Cain, who is from Charleston, S.C. “It’s been an awesome experience and it’s gone better than I ever thought possible. Thanks to everyone for making it possible for us.

Melanie Doughty of Region 3 was also experiencing NAYC for the first time and she was thrilled. “Thanks to my coaches for helping me get here and try and achieve my dreams, which has happened!” she said. “Huge thank you to USDF and all our sponsors. It’s a huge honor to be here and I can’t believe it’s happening.”

Doughty, 17 and from Cocoa Beach, Fla., rode her own Fascinata, a 10-year-old Rhinelander mare, to a score of 66.30% for Region 3. “I’m really proud of her for listening to me in the big arena and her energy level was really good. We had one mistake in the trot, but I really think she shone in the canter today, so I’m really happy,” said Doughty.

Isabelle Braden wasn’t quite sure what to expect when she shipped Erin and Chris Braden’s Dali de la Ferme Rose to NAYC. But she put in a solid score of 65.15% in her first CDI experience. “A couple months ago, this competition was a distant goal for me; I didn’t know if I could make it. I never, ever thought this could be possible,” Braden said.

Braden just started showing Dali de la Ferme Rose, a nine-year-old Hanoverian gelding, in March. “My horse hasn’t competed much before and this is his first big trip. I thought he was so good in the contact and overall just amazing,” she said. “He listened so well to me. We had a few mistakes, but they’re fixable and I’m very excited for the future.”

All of the team riders were enormously appreciative of the support of the event’s sponsors, their team sponsors, and the people who helped them compete. “I’d like to thank the USDF and USEF for putting on such an amazing competition, Adequan for doing such a great job sponsoring it, and all our wonderful sponsors,” said Braden. “It’s been such an honor to be here and we thank everyone so much for helping us get here and achieve this.”

Check out the live stream of the NAYC on USEF Network continuing Friday, August 3, with the USDF North American Young Riders Dressage Individual Championship at 9:00 a.m. EST and the children’s, junior and young rider Team Finals of the North American Youth Show Jumping Championships, presented by the USHJA, at 8:30 a.m. EST.