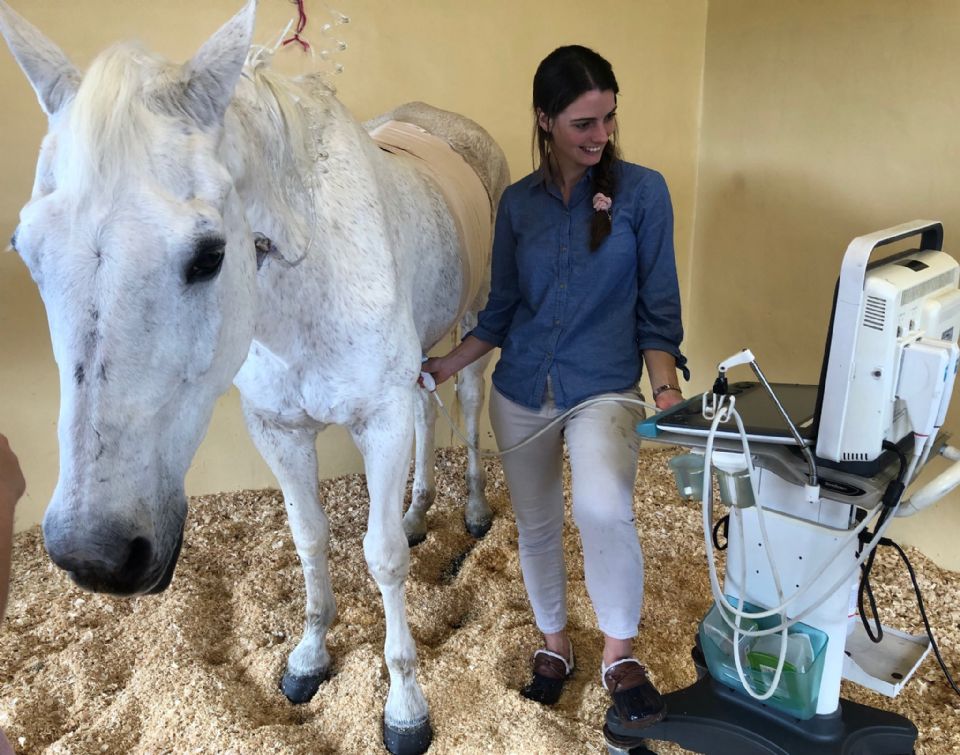 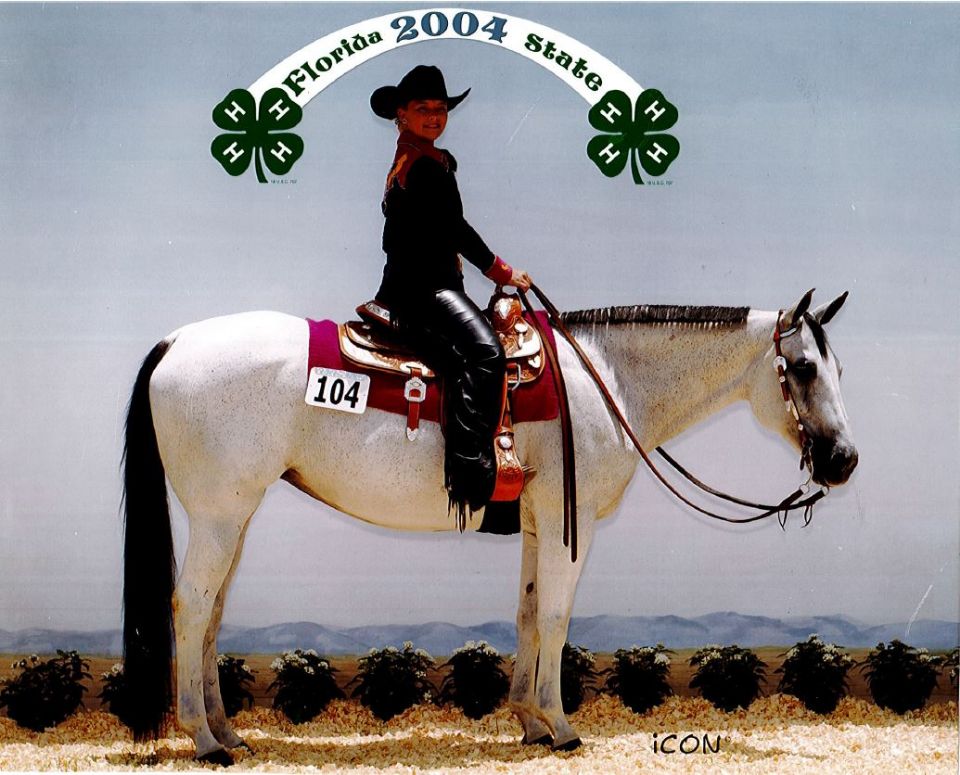 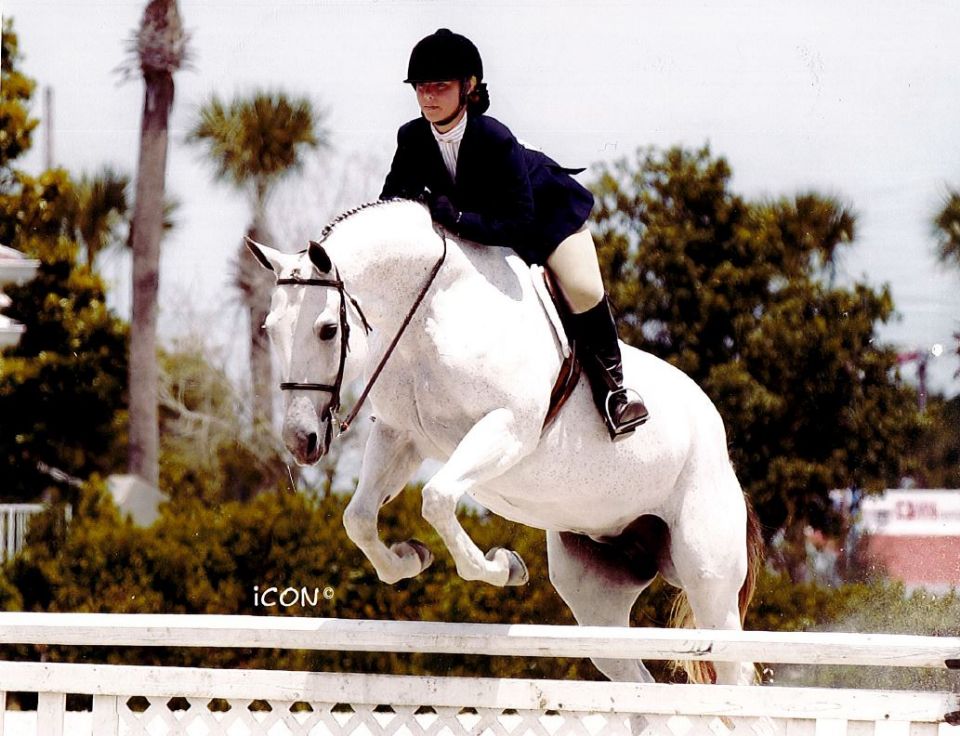 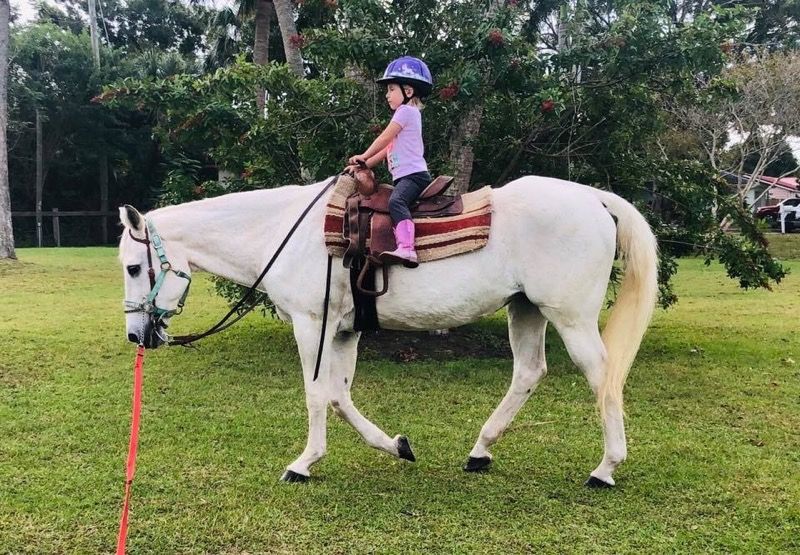 Belle helping one of many young riders get their start.
Photo courtesy of Jennifer Penn 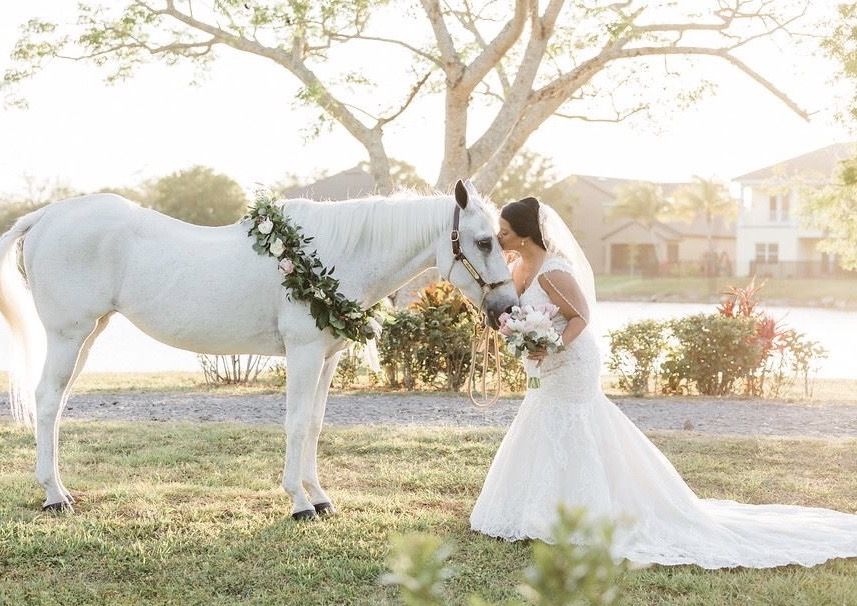 When Jennifer Penn learned that her horse Belle was in the beginning stages of a bout with colic in February, she knew she was not ready to say goodbye to her beloved horse. The 33-year-old American Quarter Horse named Wagners Mint Joker, but known to Penn and her family as Belle, was the horse of a lifetime.

Penn’s mother, Becky Seton, and late grandfather, Bob Lowery, both of Vero Beach, FL, purchased a then 12-year-old Belle for Penn in 1998. “We were both 12 years old and it was a match made in heaven,” recalled Penn. “I had outgrown my show pony, so it was time to look for an all-around horse that I could show and have fun with. I am an only child, so she is like a sister to me. As I grew up, I experienced life right alongside her.”

Belle quickly lived up to her reputation as an all-around horse, actively competing with Penn at AQHA breed shows, open and 4-H circuits throughout Florida, show jumping events, and exceling in western trail competitions. Belle even pulled a cart for a time.

When Penn was 18, she started her own lesson program with Belle as her equine partner. “Belle provided a solid foundation for many riders, both young and old,” she said. “She not only taught me how to become a horsewoman, but she has also impacted so many young people’s lives and taught them showmanship skills. She’s special to me and my mother Becky, but also to so many people who have gone on to become very successful horsemen and horsewomen.”

Belle was partially retired in 2018, and was the guest of honor at Penn’s wedding the same year. The mare gave her last lesson about six months ago. She was still being ridden once a week with the occasional trail or pony ride for yet another up-and-coming rider.

Belle was thriving until colic threatened to disrupt her retirement.

On Saturday morning, February 1, Belle had not been drinking from her water buckets, did not finish her breakfast, and had only passed manure twice throughout the night before. Penn took these abnormal behaviors very seriously. “She’s tough as nails, so she was not showing any signs of discomfort; she was just standing there quietly in her stall. By knowing her habits we were able to identify a problem and make early decisions.”

Belle was initially treated by her primary veterinarian, Dr. Kelly Alderman of Alderman Veterinary Services in Fellsmere, FL. Based on Dr. Alderman’s recommendation, Belle was transported to Dr. Karie Vander Werf’s Treasure Coast Equine Emergency Services in Palm City, FL, where an ultrasound on Sunday showed an impaction in the large intestines and displacement of the small intestines.

“It was very obvious to us that if we were going to consider surgery, we would have to do it sooner rather than later,” said Penn. “The decision was made to preserve her strength and transport her to Palm Beach Equine Clinic for Dr. Weston Davis to operate on her.

“It was because of his confidence in the surgery despite her age, that I felt at peace with the decision to proceed with surgery,” continued Penn.

One of three board-certified surgeons at Palm Beach Equine Clinic, Dr. Weston Davis performed the emergency colic surgery to remove a right dorsal impaction in the large colon and correct a severe displacement caused by altered motility within the intestines.

“Her primary veterinarian had done everything that she could medically do for the horse before referring the case to Palm Beach Equine Clinic,” said Dr. Davis. “In some colic cases, a prolonged course of medical treatments might result in the horse no longer being a surgical candidate. When things were not improving quickly enough, the horse was sent to us. Our main concern was to determine if Belle was as healthy a surgical candidate as she could possibly be.”

According to Dr. Davis, Belle’s physical examination and blood work revealed her to be a very healthy, albeit geriatric, colic case. “She is the oldest horse that I have performed colic surgery on. At the time of her arrival, Belle was well-hydrated with balanced electrolytes levels and stable organ systems. She was an overall good candidate for colic surgery, even at 33 years old,” he said.

While not every geriatric colic case is well-suited for surgical intervention, Dr. Davis considers two factors before moving forward with any surgery. “The surgery has to make sense for the horse, meaning that they are a healthy candidate with the ability to recover, and they have the will to live,” said Dr. Davis, who noticed how resilient Belle was from the moment he saw her. “The other point is that the surgery needs to be financially reasonable for the client. In Belle’s case, there was a will to live, and a strong emotional connection with this horse.”

After a successful colic surgery, Belle was moved to the Palm Beach Equine Clinic Hospital for recovery where she was cared for round-the-clock by Dr. Candelaria Chunco and hospital staff.

“Dr. Davis and Dr. Chunco were fantastic,” said Penn. “They were both so kind, and I received regular text updates. I knew that they were invested in her recovery. When she stood up after anesthesia, I remember Dr. Davis saying to me, ‘this horse is a badass,’ and she really is!”

Belle returned home to Vero Beach, FL, on February 19, and celebrated her 34th birthday on March 27. “Her recovery was slow, but she is doing well, regaining an appetite, working her way back to regular turnout, and starting to act like her old self again,” said Penn. “She is an incredibly special horse to not only me and my mother, but to my husband, family, friends, and the horse community here. It’s so wonderful to have her back home.”