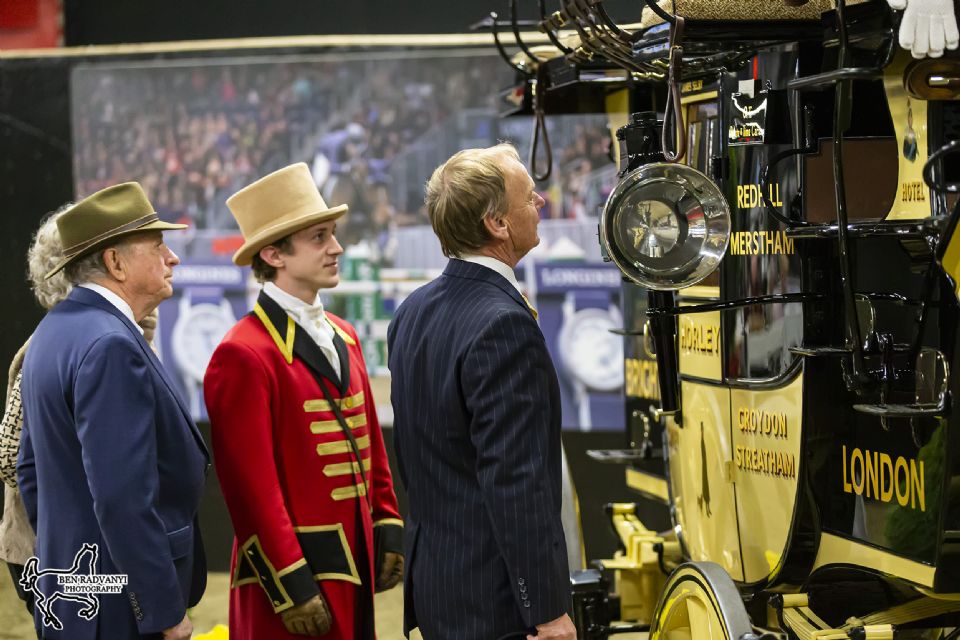 Mr. and Mrs. Harvey and Mary Waller look on as their ‘Old Times’ road coach is judged during the road coach’s presentation and appointments judging reception on Friday afternoon, November 8.
Photo by Ben Radvanyi Photography 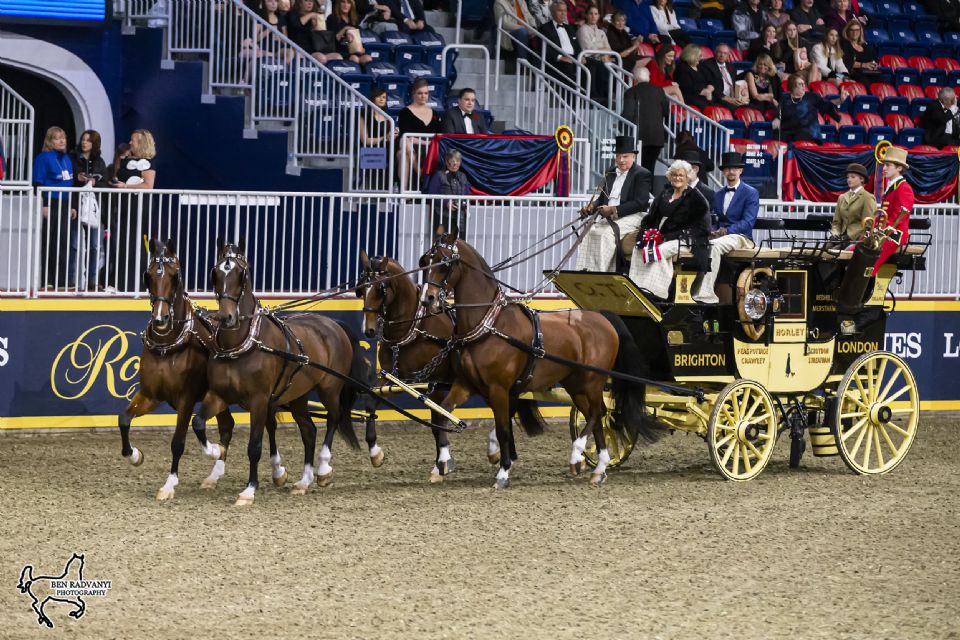 Mr. and Mrs. Harvey and Mary Waller of Stockbridge, MA, and their ‘Old Times’ road coach claimed their fourth consecutive victory in the Green Meadows Four-In-Hand Coaching Appointments Class at the Royal Horse Show, held as part of the 97th Royal Agricultural Winter Fair in Toronto, ON.

The Green Meadows Coaching division, sponsored by Hugessen Consulting, Inc., features six classes dedicated to the great tradition of the road coaches and park drags of years gone by. The Green Meadows Appointments Class is judged on the performance of the horses and the presentation of the road coach or park drag, with strong emphasis on the appointments such as the authentic lunch chests, interiors, stick and umbrellas baskets, coachmens’ aprons, and other accoutrements.

“It’s so much a part of the elegance of The Royal and its history,” said Willa Gauthier, Chair of the Royal Horse Show, of the Green Meadows competition. “It’s something that is so historical and almost ‘other world’ that you don’t get anywhere else.  I think it’s critical to the tradition of The Royal.”

The Waller’s ‘Old Times’ coach exemplifies a fine example of those days gone by, as it was famously driven from London to Brighton, England, in the 1880s.  It has since been conserved in its entirety by the Wallers, who purchased the road coach in 2001 and had the paint stripped down to find the original color and lettering, enabling it to be restored to its exact original appearance.

The Green Meadows division is only one example of the diverse equestrian competition offerings that make the Royal Horse Show so special, with the 10-day horse show featuring a full gamut of classes including the highest level of international show jumping, in-hand breeding classes, an array of driving divisions, and hunter, jumper, and equitation competition for a wide range of ages.

“The Royal is an event that is all encompassing,” added Gauthier. “If you don’t support divisions such as the Green Meadows and you don’t keep them coming, they are gone.”

The 97th Royal Agricultural Winter Fair ran from November 1 to 10 at Exhibition Place in downtown Toronto, ON.  For more information, please at www.royalfair.org/horseshow.html.