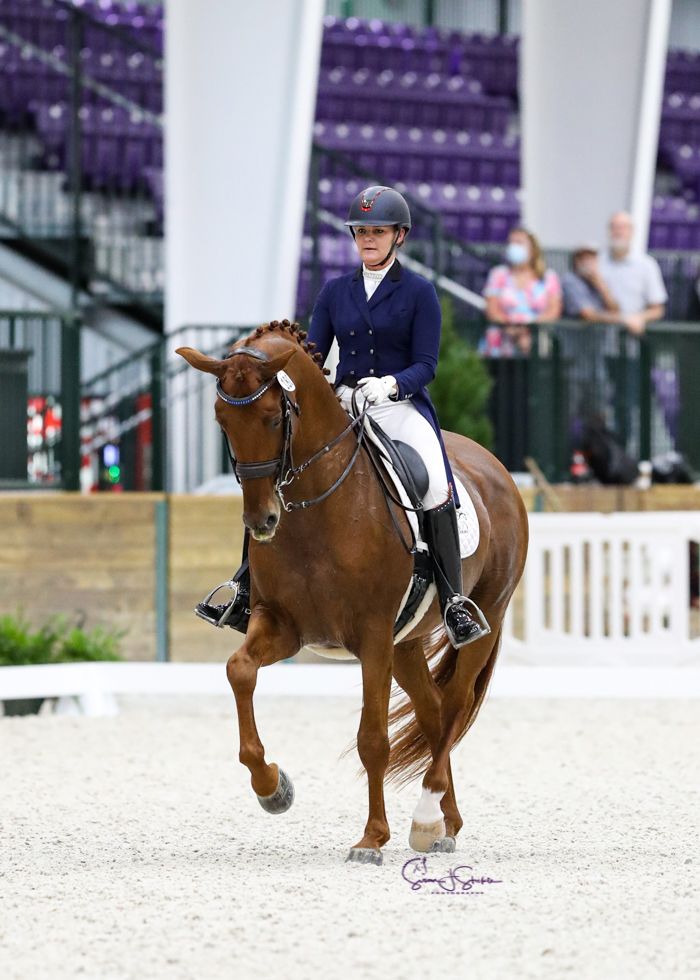 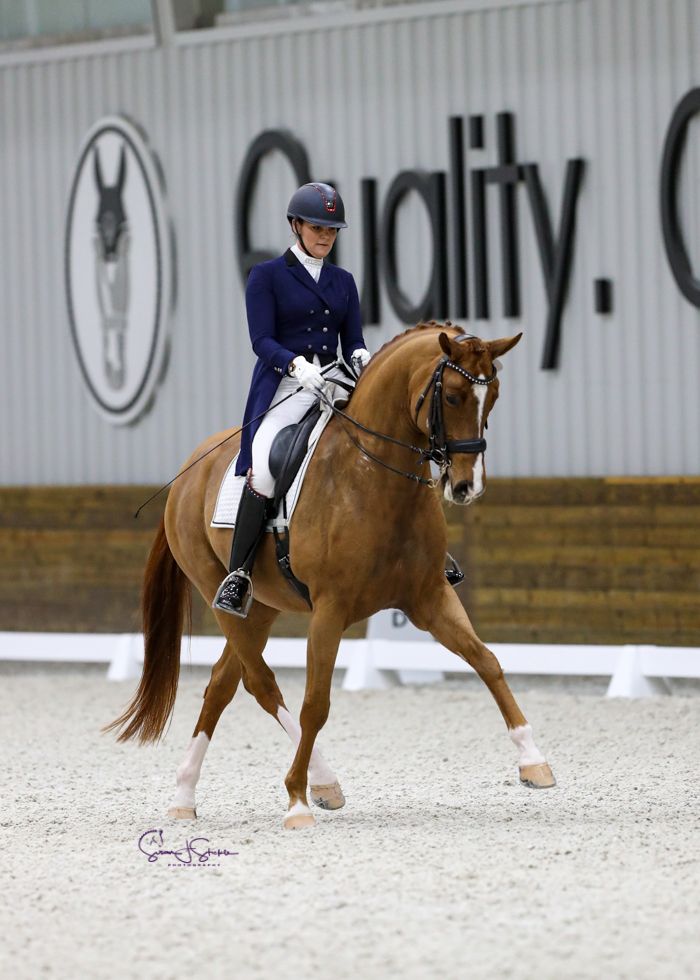 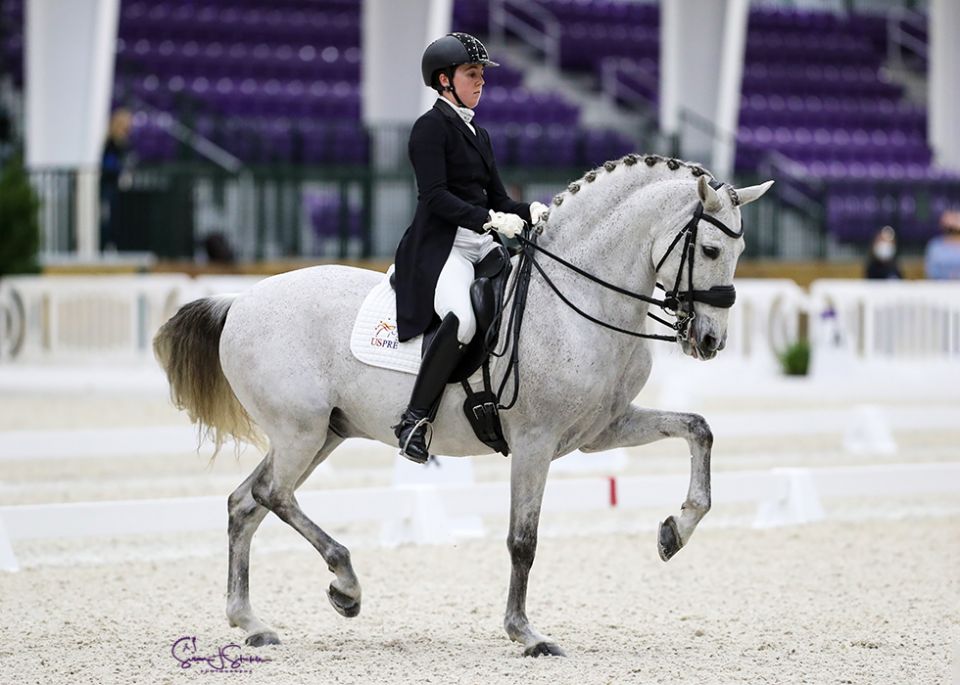 The season-opening show for dressage at World Equestrian Center – Ocala was held January 7-9, 2022, with national-level competition. Sponsored by Hampton Green Farm and Discover Dressage, the World Equestrian Center Dressage VI show held classes from USEF Training Level up to Grand Prix with GAIG/USDF Regional Championship qualifying opportunities. Dressage VI was the first dressage show of 2022 after a successful first year of dressage in 2021 that drew rave reviews from competitors.

American rider Sarah Tubman (née Lockman) brought two big tour horses up from her winter base in Wellington, Florida, and scored wins in all four classes she entered. First Apple, Summit Farms’ 12-year-old Dutch stallion by Vivaldi, led Friday’s Grand Prix with 72.391% and scooped the Grand Prix Special on Sunday with another plus-70% score.

“This weekend we were testing out some new theories and gears getting ready for the CDI season this year,” said Tubman, who won individual gold and team silver medals with the U.S. Dressage team at the 2019 Pan American Games with First Apple. “Apple was super and on his game, but I dropped the ball and had an uncharacteristic off course. But dusting off the cobwebs is why we were here ahead of going down centerline in an FEI test – and he’s a young grand prix horse, so the more mileage, the better.”

Tubman’s other ride, the 10-year-old mare Balia, was stepping up to Intermediate II for the first time having last shown in April 2021 at small tour at World Equestrian Center – Ocala.

“She’s been with me since she was five, so this was a very special weekend as it was her first ‘baby grand prix’,” said Tubman of Summit Farms’ Bellissimo M daughter. “On the first day we were over 70% but on Sunday she was a little tired and made some green mistakes. The highlights were the piaffe and pirouettes, and she’s really showing potential to be my next big grand prix horse. She’s a super workhorse and a typical mare ready to fight for me.”

Tubman values the championship feel of the impressive venue: “It’s a grand feeling when you’re there and even though it wasn’t a huge CDI show, it feels very important. The venue gives an electric, stadium feeling and it’s so great for these horses – who we hope will compete in Europe and on teams – to give them that type of exposure.”

World Equestrian Center – Ocala is particularly special to Tubman as she married her now-husband Lee Tubman less than a month ago in the on-site chapel.

“Last year we were there for the CDI and loved it so much,” she said. “We saw the chapel and as my husband is my coach and also a CDI rider, we thought there was no better place for us to get married than a horse show.

“I love everything they’ve done with the facility,” she continued. “It’s great to show at and they have thought of absolutely everything for the horses, but what I really love is seeing all the non-equestrians from the area wander in and sit in the stands. I had more people watching my Grand Prix than I’ve seen for quite a few months. I believe we can show how amazing equestrian sports are to people who maybe aren’t there to see the horses, and possibly seeing something like that can get them interested in riding or owning or supporting. It’s a great way to promote our sport.”

Kerrigan Gluch of Ocala, Florida, also had a triumphant weekend, posting a plus-71% win at Grand Prix with Hampton Green Farms’ 11-year-old PRE gelding Mejorano HGF by Grandioso III. The pair went on to score an emphatic 81.825% Freestyle victory at the level.

Diane Morrison’s international Grand Prix mare Dee Clair, a 14-year-old by Sir Sinclair, was competing under Anna Marek on the CDI circuit until the spring of 2021, but this weekend adult amateur Caroline Stevenson picked up the reins at Intermediate I to score 68.235% – the top score not just in her section but across the whole class.

Local rider Lisa Hellmer, who runs a boarding and training facility in Ocala, brought four horses to the show and rode 11 tests over the three days, winning six of them. Her top scores, at First Level, came aboard the triple winner Mariah ISF, a 10-year-old Friesian. The mare, owned by Susan Norman, was bred by Iron Spring Farm.