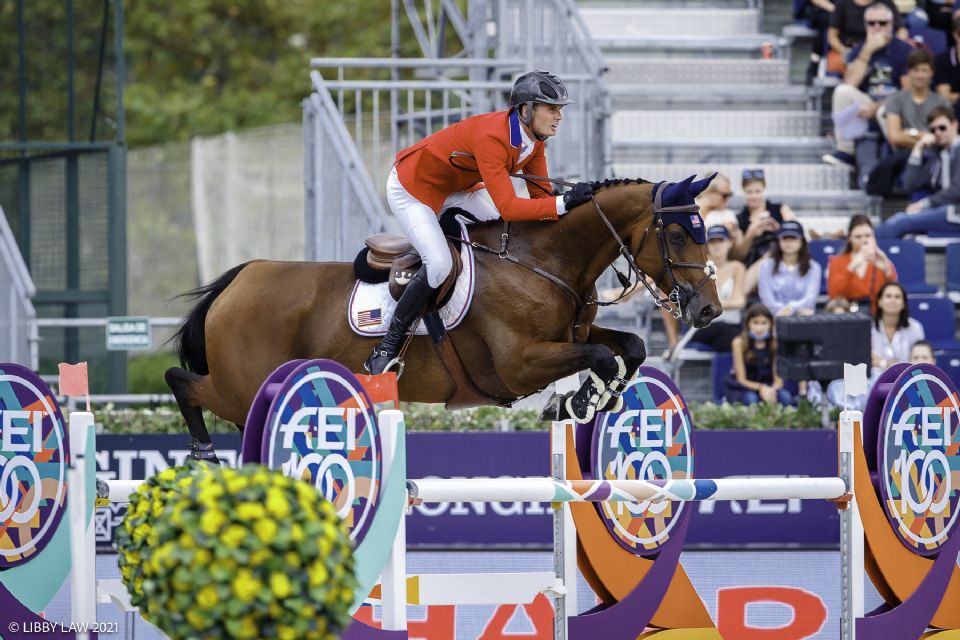 Ridland noted, “When we arrived here and looked at what we were going up against, those teams were the real deal teams; it was the ‘A’ team of all those countries. To hold our own like we did today is something that we can be proud of.”

The NetJets® U.S. Jumping Team qualified through Friday’s opening round and returned on Sunday afternoon for the second round on a clean slate against seven other teams.

The pathfinder for the team was Lillie Keenan (New York, N.Y.) and Skyhorse, a 14-year-old Belgian Sport Horse gelding owned by Chansonette Farm LLC. They had a beautiful trip going, but ended up finishing with eight jumping faults and one time fault.

Spencer Smith (Wellington, Fla.) and Quibelle, a 12-year-old Hanoverian mare owned by Gotham Enterprizes LLC, put in a brilliant clear round to help the team. This was their first Nations Cup together and only the second Senior Nations Cup ride for Smith.

“What a picture-perfect round he had today. That was just spot on,” said Ridland.

Schuyler Riley (Wellington, Fla.) and Robin de Ponthual, a 16-year-old Selle Francais gelding owned by Katherine Gallagher, had four faults on the “b” element of the double combination.

“If Lillie hadn’t left all the jumps up on Friday, we wouldn’t’ have been here today,” described Ridland. “Schuyler and Robin were so solid both rounds; they were a hair away from being clean both times. Baloutinue has so much energy and stamina and has been such a huge part of these past few months from Tokyo to Aachen to Barcelona. He’s so tough and game and gets a much-deserved rest now. Our alternate, Michael Hughes, came at the last minute when we had a spot open up. It was great having him here as the fifth rider, and he had a very good show.”

The U.S. team finished on 12 total faults for fifth place. The Netherlands won on a clear total score, while Ireland was second with one fault and Belgium was third with four faults. Sweden also had four faults but slower times but them in fourth place, while the U.S. landed in fifth place. Germany placed sixth on 13 faults, Brazil was seventh with 14 faults, and Spain wrapped up with eighth place and 26 faults.

“It’s been quite a run,” said Ridland of the U.S. team’s results over the past two months, from the Tokyo 2020 Olympic Games to Spruce Meadows and CHIO Aachen and now the Longines FEI Nations Cup Final in Barcelona. “To be honest, we’re ecstatic. There were so many riders, young and veteran, when you look back at the schedule. We always aim for the podium and in three of the four events, we were there, and we were pretty close here in Barcelona. Every one of those riders contributed.”

There were 14 different riders that were named for the NetJets® U.S. Jumping Team over the past four major team events.

“Everybody is very proud of the riders’ effort this week and the last few months leading up to this,” he continued. “We were able to make last-minute switches, and so many riders and owners have been game to help and be there. We are already in selection procedures for next year’s World Championship, where we have to defend our title but won’t be on home soil. That’s why it’s so exciting and gratifying that we’ve been able to use so many riders of the future in this very crucial segment we just went through. It’s so important that we have the next generation of riders at these events, like at Aachen, in our future. We have a lot of big events ahead of us!”

For more information about the CSIO Barcelona, visit www.csiobarcelona.com.