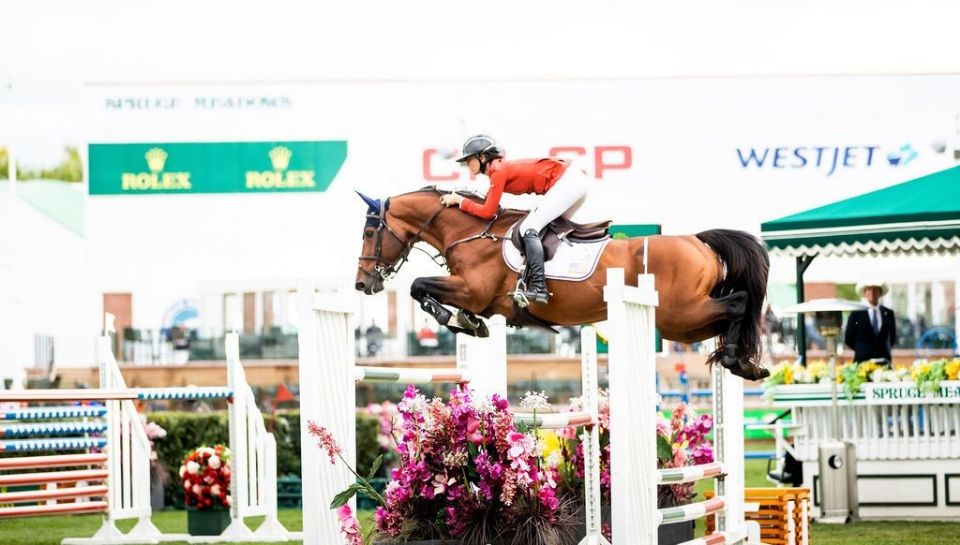 Bliss Heers and Antidote de Mars had the top performance for the U.S. team to help them finish second in the BMO Nations Cup at the 2021 Spruce Meadows Masters tournament.
Photo by Ashley Neuhof Photography

The best performance of the day came from Bliss Heers (Las Vegas, Nev.), and Antidote de Mars, an 11-year-old Selle Français stallion by Diamant de Semilly x Jarnac owned by Bridgeside Farms LLC. In round one, they recorded the only clear round of the day for the U.S. team and followed up with just one time fault in round two over the challenging track set by two-time Olympic course designer Leopoldo Palacios (VEN).

“My horse was on fire, as always,” said Heers, who was making her third Senior Nations Cup appearance. “He’s just a machine, and I can always trust him. It was an amazing feeling to be back on a team and be able to deliver a good performance.

“To be on a Nations Cup team is an amazing opportunity,” she continued. “To be here at Spruce Meadows in particular, jumping one of the biggest classes in the world, that’s another honor on its own. To come out second in the Nations Cup was incredible, and to support my team and jump clear, the feeling is unbelievable. I have to say thank you to Robert for giving me the opportunity to jump at such a venue. They did a fantastic job here as always.”

“I can’t say enough about her,” said Ridland of Heers. “Her two rounds were very consistent and exactly what we needed.”

The pathfinders on the team were Alex Granato (Wellington, Fla.), and Carlchen W, a 13-year-old Mecklenberg gelding by Chacco-Blue x Continue owned by Page Tredennick. It was not their day, as refusals led to elimination in round one and retirement in round two.

Ridland described Granato and Carlchen W, members of the 2019 Pan American Games silver medal-winning team, as a “wonderful horse/rider partnership.” There had been issues with Carlchen W losing shoes throughout the week, including in the Nations Cup.

“When something like that happens with a horse with so much quality, it’s hard on their confidence,” explained Ridland. “It was one of those unfortunate situations that happens from time to time. He’ll come back just fine.”

“She rode in her debut like she’s been doing this for quite some time,” said Ridland of the 21-year-old rider. “It’s not easy to have your first Nations Cup ride in a five star. She was cool and rode beautifully. They were two beautiful rounds.”

Ridland noted, “I kept pointing out to Bliss and Natalie that it takes three scores, and the second round changes things often. We’re not out of it; we’re in the fight. Both of them proved it. Between the two of them, they don’t have a lot of experience, but they came through in the clutch.”

Veteran anchor rider McLain Ward (Brewster, N.Y.) helped the team ascend to the silver medal spot on the podium. With an uncharacteristic eight faults in round one, Ward and HH Azur, a 15-year-old Belgian Sport Horse mare by Thunder van de Zuuthoeve x Sir Lui owned by the rider in partnership with Double H Farm, returned in round two to record one time fault for exceeding the 82-second time allowed.

“That’s why he’s an anchor,” stated Ridland. “Everything is really on the line when the anchor goes in. At that point in time, the win was out of reach, but second place wasn’t. The only thing that would keep us in contention was a one-fault round; we couldn’t afford a two-fault round or more. He intentionally rode for a one-fault round. Time allowed was a factor today, and McLain didn’t need to take the risk for a clean round. It was just textbook McLain. He did it, and that’s why we ended up second on the podium.”

The U.S. team were in third place after round one with nine faults and added six faults in round two to finish in second place with 15 total faults. The team of Canada 1 won with eight faults, while the Canada 2 team finished third with 16 faults.

“The day ended up on a very big upward swing, and the sun came out for the presentation,” said Ridland. “This is the first Nations Cup here in two years, and it was just so nice to be back at one of the greatest facilities in the world.”

Fielding Nations Cup teams in back-to-back five-star Nations Cup events was something that Ridland and US Equestrian have planned for all year, as next week’s World Equestrian Festival at Aachen CHIO in Germany will be another major event.

“We said at the beginning of the year that starting out, we were in preparation for the Tokyo Olympic Games, but I said we can’t just focus on Tokyo,” he pointed out. “It’s very important, but so is everything else. Two weeks after Aachen is the FEI Nations Cup Jumping Final in Barcelona. By the time we finish Barcelona, a very large number of riders will have been a part of team events this year. That’s what is so important, to think for the future. We are already in the early stages of the evaluation process for the World Championships next year in Denmark. We couldn’t come back from Tokyo and rest on our laurels. I’m looking forward to next week as well.”