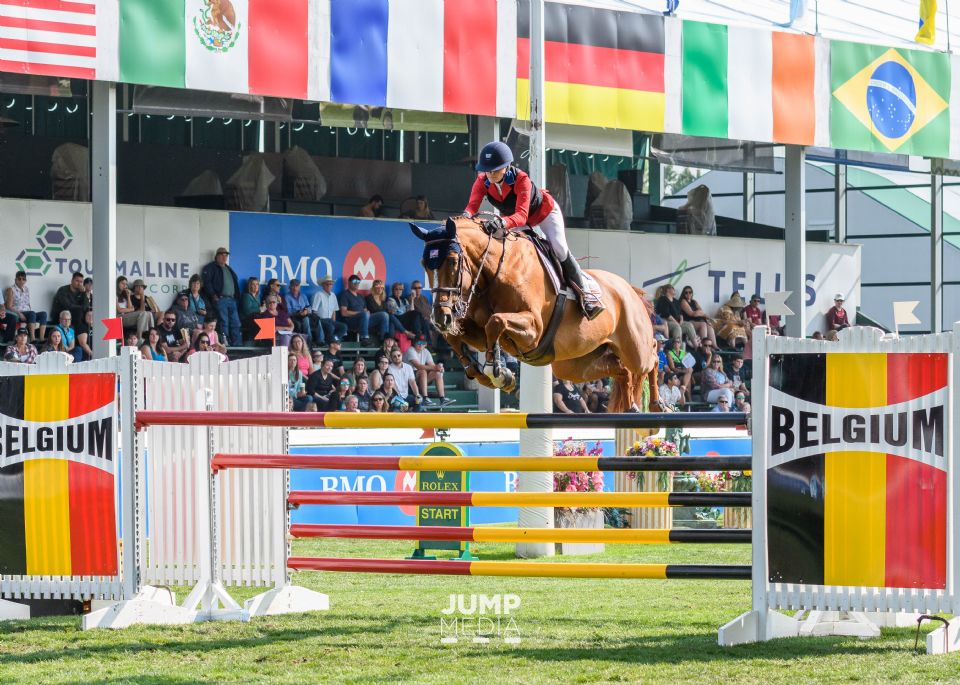 Kent Farrington (Wellington, Fla.) was the pathfinder for the team aboard Landon, Haity McNerny’s nine-year-old Zangersheide gelding by Comilfo Plus Z x Quadrillo. They picked up four faults after the back rail of the oxer in the Mexico-themed in-and-out came down, and added two time penalties, finishing just over the 72 second time allowed in 73.41 seconds for a six-fault score.

Next onto the grass arena for the U.S. was Nicholas Dello Joio (Wellington, Fla.), who was making his senior team debut with Cornet’s Cambridge (Balou du Reventon x Cambridge 8). Dello Joio and the 10-year-old Oldenburg gelding owned by The Berry Group LLC crossed the timers in an efficient 69.67 seconds but just ticked the top of the wall causing a block to fall for four faults. They added an additional four faults when the ‘b’ element of the BMO triple combination fell, resulting in an eight-fault total score.

Giavanna Rinaldi (Wellington, Fla.) rode Anton Marano’s Cosmona, the horse she piloted in the $400,700 Pan American Grand Prix CSI5* at Spruce Meadows earlier in the summer, which marked her first CSI5* Grand Prix competition and first CSI5* grand prix victory. The 23-year-old rider and the 11-year-old Dutch Warmblood mare by Cosmeo x Bogegardens Apollo kept their composure, knocking a block off the wall for four faults and picking up a single time fault in 72.61 seconds.

“Gia and Nick are new to this, but they did not ride like rookies,” said Ridland of Dello Joio, riding in his first Senior Nations Cup, and Rinaldi, in only her second team line-up. “They really rode well. Their slight mistakes were at the end of the course in the last line. We were one fix away from the second round and being really good. It was great experience for them, and they really held themselves up well.”

In a familiar position, McLain Ward (Brewster, N.Y.) was under pressure to deliver a clear performance for the U.S. to advance to the second round of competition. Unfortunately, it wasn’t meant to be for Ward and Kasper van het Hellehof (Emerald x Nabab de Reve). After the second jump, Ward and the 12-year-old Belgian Warmblood stallion owned by The Kasper Group LLC were unable to continue, forcing Ward to pull up on course and retire. That left the team on a total score of 19 and outside of the top six teams to advance to the second round.

Ridland noted, “McLain’s situation was unusual. That was unexpected. It was just one of those situations where it was unfortunate that all eight teams couldn’t come back in the second round. We assumed we would be. Kent had a young horse and a slight mistake.

“Sometimes you can four fault yourself to death,” he continued. “Time allowed was also an issue. The reality was that we didn’t have as bad a day as the scorecard indicated. There were very, very good teams there today. It’s the sport at the highest level, and some days are better than others.”

At the conclusion of the two-round competition, the Swedish team rode into the winner’s circle carrying a final score of four, while Team Switzerland finished second on seven faults, and Team Netherlands finished in third with a score of eight.