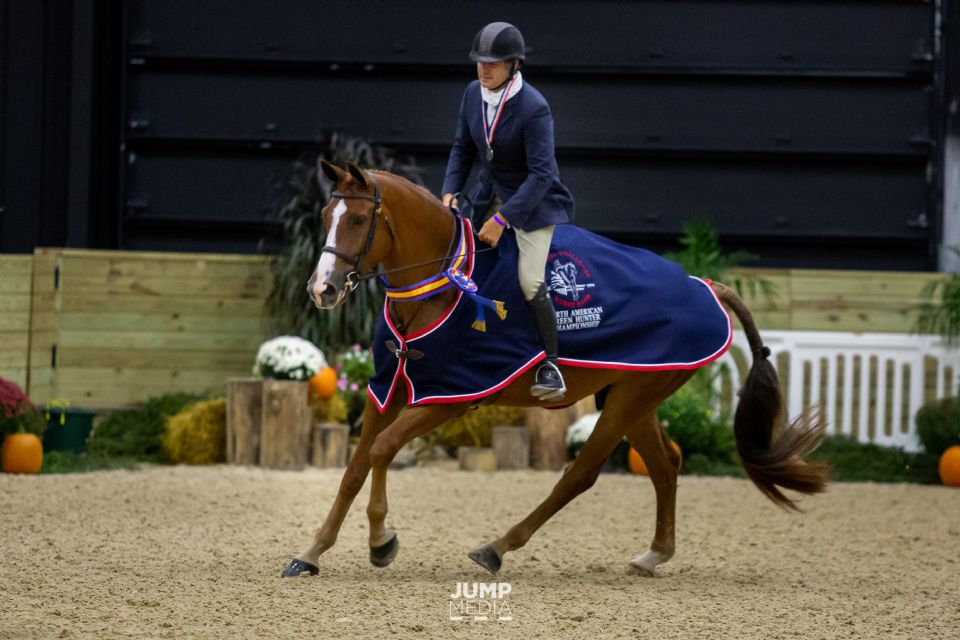 Monday Balous, ridden by Cassandra Kahle of Langley, British Columbia, Canada, and owned by Redfield Farm in Califon, NJ and Ocala, FL, and Don Stewart Jr. of Ocala, FL, was named the Connaway & Associates Equine Insurance Services High Point American-Bred Horse at the Capital Challenge Horse Show for the second year in a row. Monday Balous and Kahle scored an 88.5 in an over fences class in the High Performance Hunters to earn the award and help them go on to clinch the division championship.

“The fact that Monday Balous won this award again is a testament to his impressive breeding,” said Connaway & Associates President Laura Connaway of Little Rock, AR. “As a breeder myself, I am excited to see that there were more American-bred horses winning classes and at the top of their game. I’m grateful to be able to sponsor this award at The Capital Challenge Horse Show and hope that, as breeders, trainers, and riders, we can continue to build on this foundation of successful homebreds.”

Despite the fact that the pair won this award at Capital Challenge last year, Kahle says she only reunited with the gelding in the past couple of weeks.

“I don’t spend too much time with him throughout the year,” Kahle said of Monday Balous. “This year, he was out on lease and came back to [Emil Spadone’s Redfield Farm in Califon, NJ] at the end of August. We had two weeks at home, and we got to know each other a bit better. We rode on the flat a lot and I felt pretty good [going into this week].

“I don’t know if he’s jumped four foot [fences] in the past year,” Kahle continued. “In the first class, he touched a couple of jumps; I think he was getting to used to the height. The second day, though, he came out and was really fired up. I always enjoy riding him.”

The 11-year-old Dutch Warmblood gelding was bred by Karin Morgenstern Jimenez and Carlos Jimenez, DVM, of Sporting Chance Farm in Coatesville, PA. Originally bred to be a jumper, Monday Balous campaigned in the young jumpers with Sarah Scheiring (USA) before transitioning to the hunter ring, at which point, he caught the eye of Spadone and Stewart. Monday Balous has many accolades to his name, including winning the $30,000 World Championship Hunter Rider (WCHR) Professional Challenge with Kahle at Capital Challenge in 2019.

"Monday Balous being bred here in America makes [his success] that much more exciting,” said Spadone, who also owns and operates a breeding business, Redfield Breeding, out of Ocala, FL. “Hunters are an American sport. As hunter riders and trainers, we know what we want [in a hunter] but it was hard for us [to breed in the past] because we didn’t have access to the warmblood bloodlines. Now, we have more of that access and, in the next few years, I think we’ll see more American-bred horses at the top of the sport.”

Spadone’s Redfield Breeding also led to another American-bred winner at Capital Challenge this year. Mr. Manhattan, a six-year-old German Sporthorse gelding owned by Martin Schlaeppi and trained by John and Kitty Barker, topped the $25,000 North American Green Hunter 3’-3’3” Championship with Daniel Geitner aboard. Mr. Manhattan is sired by Maximus, another Redfield Breeding homebred, out of Philippa, a Danish Warmblood mare that formerly campaigned in the jumpers with McLain Ward before turning to the hunter derbies with Louise Serio.