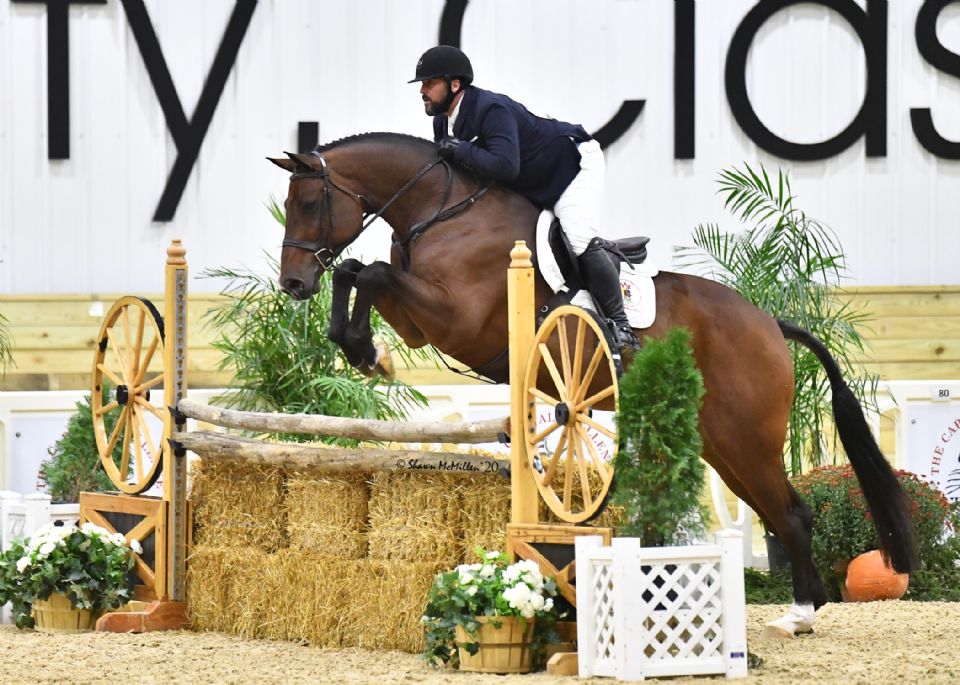 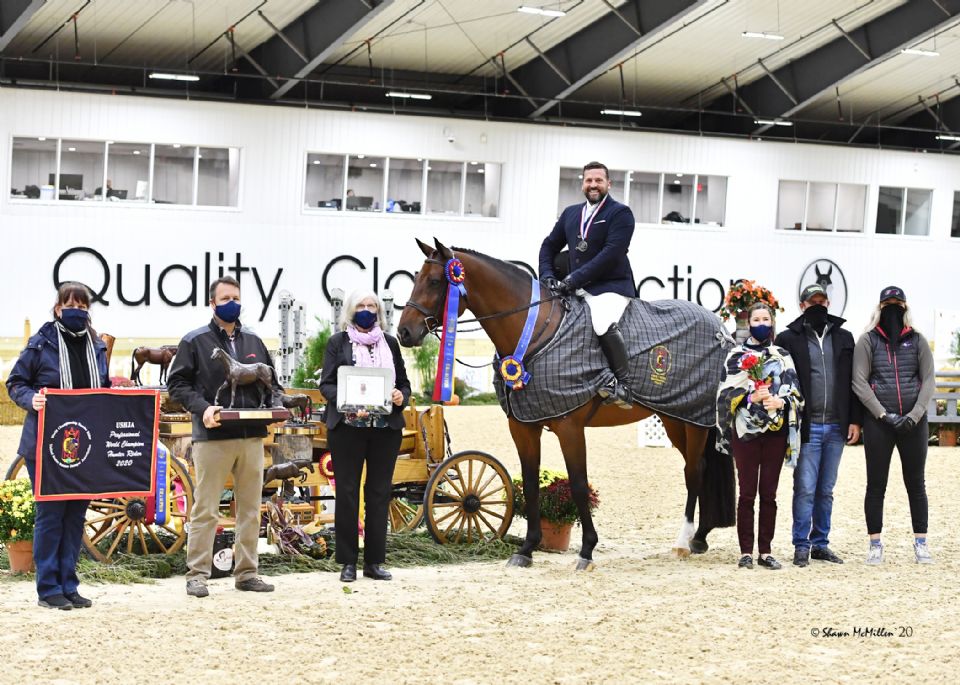 Michael Britt-Leon of Alpharetta, Georgia, made his $10,000 World Championship Hunter Rider Professional Finals debut a winning one, topping the class on Friday, October 2, during the Capital Challenge Horse Show in Wilmington, Ohio.

Britt-Leon was one of six top professional hunter riders that went head-to-head on Friday night at the World Equestrian Center, with Britt-Leon earning the victory in the two-round class aboard Private I and the All The Way Perpetual Trophy donated by Elizabeth Busch Burke and Lysa Burke Horkan.

“It is a dream come true to win the WCHR Professional Finals,” said Britt-Leon, 37. “I have watched this class for a while. Being here in 2020, when it’s been so crazy is incredible—just being at a horse show of this caliber. It’s been a memorable and wonderful experience. This just put it over the top. I could not be more grateful and proud and excited. I have so many emotions right now I just can’t even think. I’m so excited.”

The 2020 WCHR Pro Finals followed a format altered from prior years and consisting of two rounds, a Classic Hunter round and a Handy Hunter round, both completed on a horse of the rider’s choosing.

“The change in the WCHR Pro Finals format this year was due to the COVID-19 pandemic,” explained Carl Weeden, the USHJA WCHR Task Force Chair. “We’re trying to minimize exposure between the different riders, switching horses, grooms holding horses, tack and equipment. Even having the riders stay mounted on their horses will help to minimize exposure. It takes a lot of interaction between people and cross traffic to have this class held in its standard format.”

Following the new format, Britt-Leon and Private I led the class at the end of round one with an average score of 92 from the three judging panels: Shane George and Keri Kampsen, Mark Jungherr and Tammy Provost, and Mike Rosser and Scott Williamson.

“The first round, I got a lot of help from my friend Geoffrey Case,” said Britt-Leon. “We worked on something a little bit different than what I would normally do. Instead of cantering around super quiet on a loopy rein, I tried to pick up a gallop and show a little more brilliance. Private I rose to the occasion.”

As riders returned in reverse order of their standings for the second round, Geoffrey Hesslink of Shelburne, Vermont, was the penultimate rider to return, and he put the pressure on with his mount, Bond. Hesslink and the 8-year-old warmblood gelding owned by Shadowfax Equestrian LLC had earned a first-round score of 91.66, and a second-round average of 94.33 would temporarily shoot them to the top of the leaderboard with a 185.99 total.

An average score of 94.00 was needed to beat Hesslink, but Britt-Leon and Private I rose to the challenge, earning a score of 94.16 to take the win with a 186.16 total. Hesslink and Bond finished in second, and third place with an overall score of 183.66 went to Evan Coluccio and High Society, owned by The Lignelli Family.

Greg Crolick and Jon Cotton’s Handwritten placed fourth with a 181.33 total, while fifth place went to Courtney Lenkart and Glorieus, owned by La Primera Hacienda L P, with 178.66. Kelley Farmer and Nolan, owned by Kathy Chiaf and Sharon O’Neill, were sixth on 166.66.

“He jumped out of his skin at every jump and gave me everything I wanted,” said Britt-Leon of the 8-year-old Oldenburg gelding owned by Kelly Sims. “Coming into the second round on top can be a little bit nerve-wracking for sure. When you’re at the top, there’s only one way to go and that’s down! There were nerves for sure. I’m not used to having nerves in the show ring, but I knew it was a special day. [Private I] went in and did everything I asked. It was an incredible handy.”

This year marks Britt-Leon’s third year participating in the WCHR program, and he looks forward to continuing in the future.

“It’s a really neat program, and I think that it has a lot to offer,” concluded Britt-Leon. “There’s a lot that you can do, and it kind of evens the playing field for people who can’t show 30 or 50 weeks out of the year. They get to go to those sanctioned horse shows and get those points and get to do classes like this.”

As part of Friday night’s presentations, Coluccio’s mount High Society was presented with the Far West Farms Perpetual Trophy, donated by the Karazissis Family. Recognizing the horse with the highest average score from either round, High Society won the award with a score of 95.33 in the second round. High Society and his groom, Rodrigo Hernandez, were also awarded the Shapley’s Best Presented Award.

The Daniel P. Lenehan Perpetual Trophy donated by Geoff Teall in memory of Daniel P. Lenehan and presented by the WCHR Committee to a person who exemplifies dedication and lifetime commitment to judging show hunters went to Bobbie Reber

Release by Jump Media for USHJA.