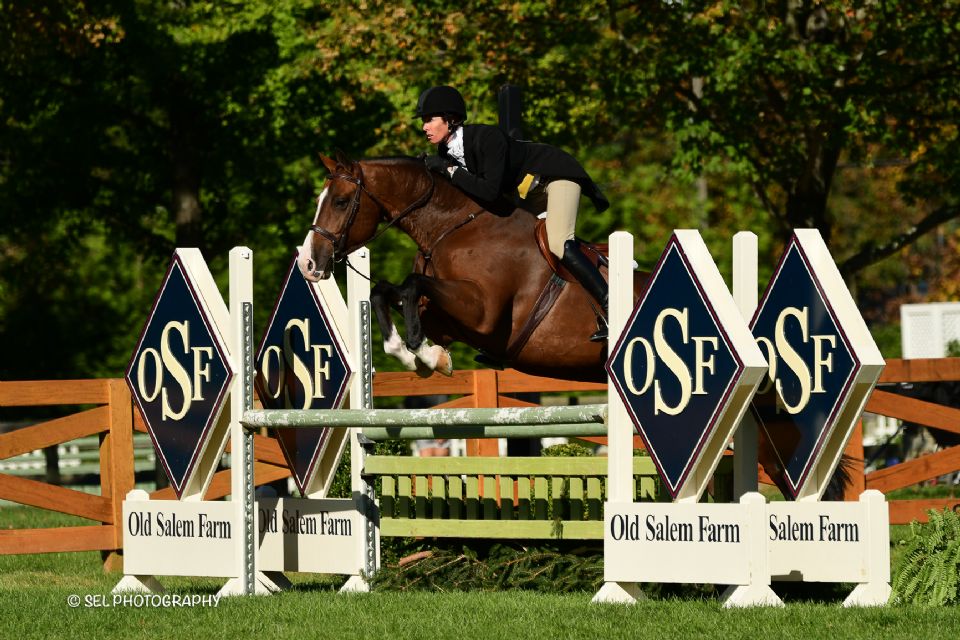 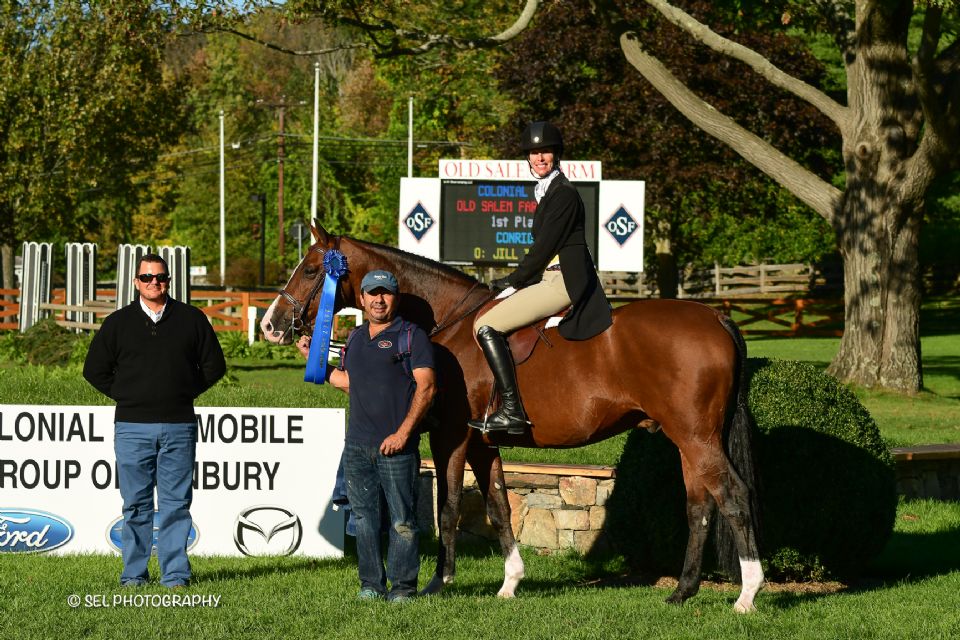 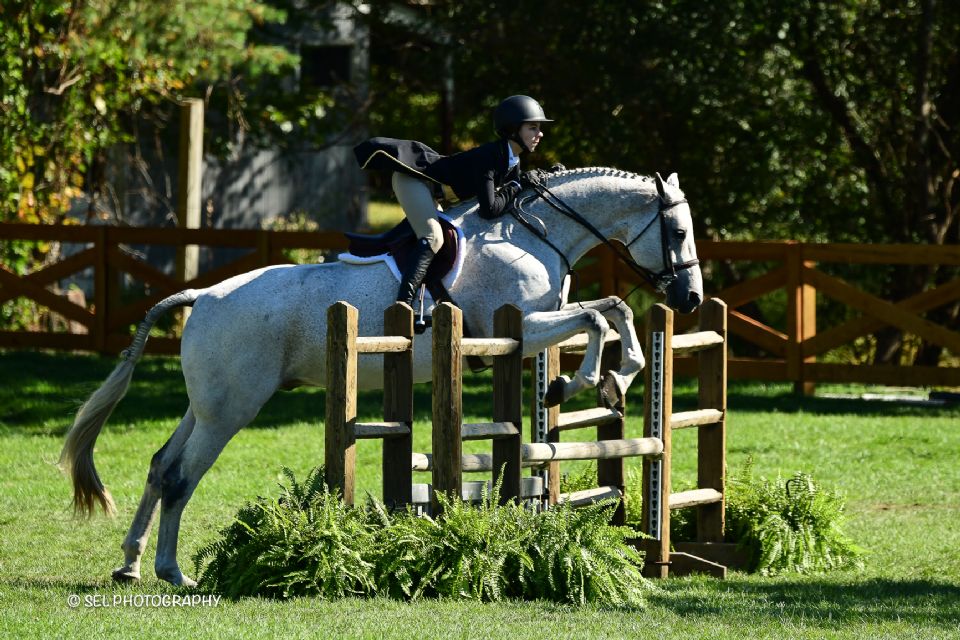 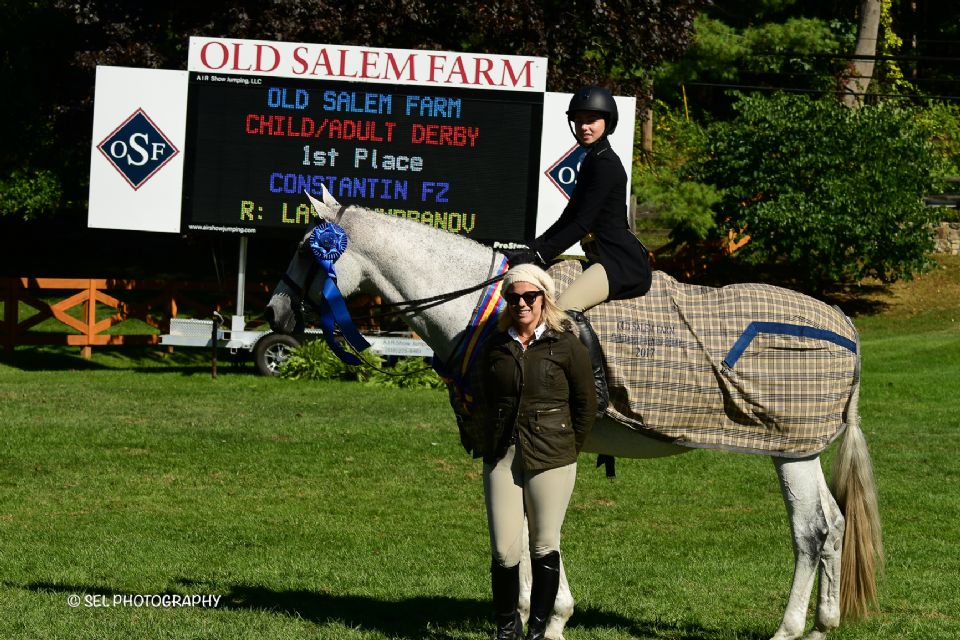 Layla Kurbanov and Constantin FZ are presented as winners of the Child/Adult 2’6” Hunter Derby by Chelsea Dwinell of Old Salem Farm at the Old Salem Farm Fall Classic in North Salem, NY.
Photo by SEL Photography 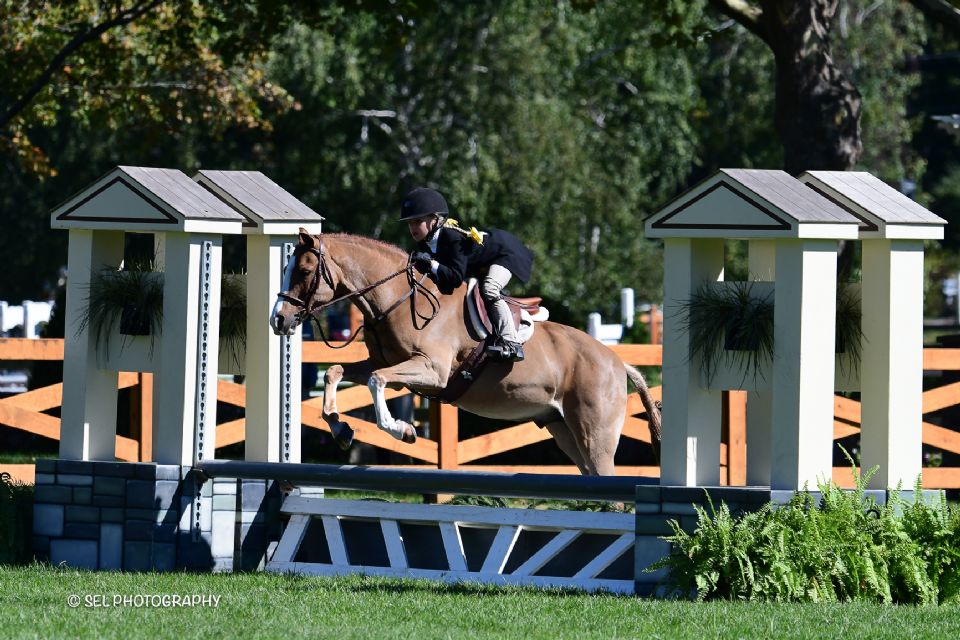 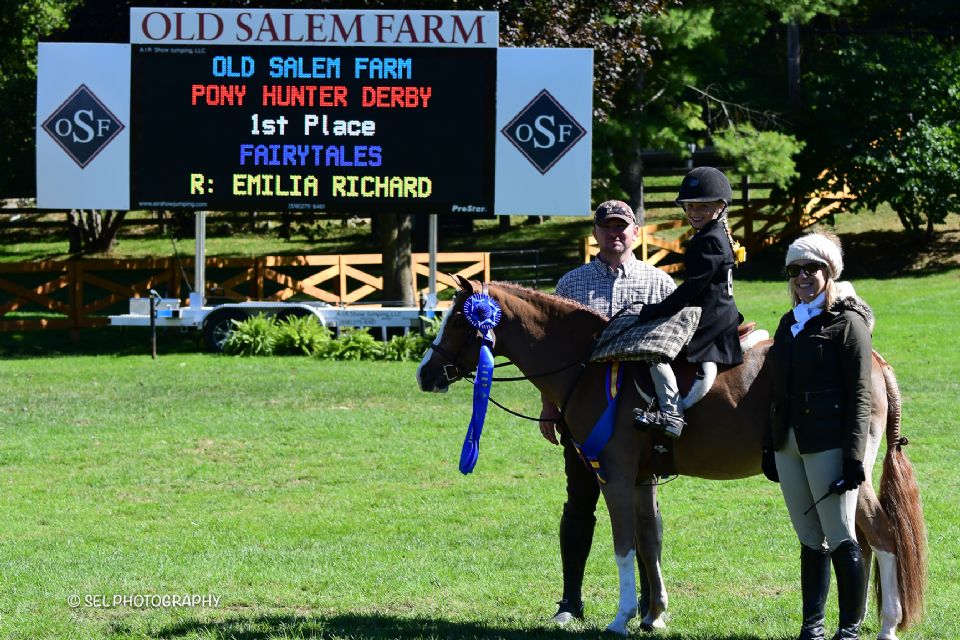 Emilia Richard and Fairytales with trainer Ryan Petronelli (left) are presented as winners of the Pony Hunter Derby by Chelsea Dwinell of Old Salem Farm at the Old Salem Farm Fall Classic in North Salem, NY.
Photo by SEL Photography

Sunday Hunter Derby Day welcomed riders of all levels to experience hunter competition on the famed grass Grand Prix Field at Old Salem Farm. In the featured class of the day, Harding moved up from second to first over two rounds to best a field of 20 horses. Her first-round score of 84 was coupled with an 87 over the handy track to give her and Conrido a final score of 171 and the victory for owner Jill Tauber.

After winning the Old Salem Farm Derby in 2016, Michael Zukerman of Old Westbury, NY, scored a 79 over the first-round track before impressing in the handy with an 87 to sit on a score of 166 in second place riding Denmark for owner Patricia Adikes-Hill. Hometown rider Heather Hays of North Salem, NY, jumped into third with scores of 86 and 78 for a total 164 aboard Houdini, owned by Patricia Raynes. John Paul Jimenez of East Hampton, NY, piloted Esperado, owned by Olivia Berger, to fourth place with scores of 81 and 79 for a total of 160, while Trevor Hawthorne rounded out the top five riding his own Quattro with scores of 83 and 76.5 for a 159.5 total.

Harding planned her fall schedule around competing Conrido in the Old Salem Farm Fall Classic Hunter Derby. She noted, “This is an amazing opportunity to bring the hunters here and ride on such a great field. The footing is amazing, and it is a nice opportunity to get the young ones to come out and get mileage. He came here last year, and it was amazing to see the growth he has had in the past year.”

Harding and Conrido also collected a top-ten ribbon in the Old Salem Farm Hunter Derby in 2016.

“He is a really trustworthy horse, and he was absolutely amazing today,” said Harding of the eight-year-old Holsteiner gelding. “Overall, he was more relaxed than usual and had more of a flow. There were a lot of inside turns in the second round and he is still a little green, but was right there every time. This is his second year at 3’3”, and I think he is ready to move up into the bigger derbies soon.”

Harding trains alongside Juan Estrella at Bright Side Farm in Water Mill, NY, and brings riders to compete at Old Salem Farm often, especially during the winter show season when her riders remain on Long Island instead of heading south to Florida.

“We love it here,” she said. “We have made so many friends through showing at Old Salem Farm’s events, and we feel like family now. It is such a friendly atmosphere to bring riders of different levels, as well as both young and experienced horses.”

In the Child/Adult 2’6” Hunter Derby earlier in the day, 14-year-old Layla Kurbanov earned a win in a competitive field of 32 riding Constantin FZ, a 12-year-old Warmblood gelding by Campione VI owned by Olivia Sbrocco. Kurbanov trains with Jill and Sydney Shulman at Back Country Farm based in Greenwich, CT, which attended the Old Salem Farm Fall Classic with a string of 27 horses.

“I knew this would be such a fun experience,” said Kurbanov. “I really just tried to have fun, and it turned out really well for me. Constantin is so hard-working and a very good listener. He was very adjustable today. That is what I like most about him.”

Kurbanov got the ride on Constantin FZ a year ago, and the gelding has been her main equitation mount ever since. In addition to adding derby horse to his résumé, the gelding also carried Kurbanov to a top-ten finish in the Child/Adult Jumper Classic on Saturday.

The youngest rider in the Pony Hunter Derby, which kicked off Sunday Hunter Derby Day, proved to be the best in a field of 13 competitors. Six-year-old Emilia Richard of Middlefield, CT, took the win riding Fairytales, a 15-year-old small Welsh Pony gelding owned by Fairytales, LLC.

“I had a lot of fun,” said Richard, who rides under the direction of her mother and trainer, Jaime Richard, as well as Ryan Petronelli of Epic Farm based in Middlefield, CT. “Fairy is really sweet, and he’s always a good boy for me.”

When asked what her favorite part of the day was, Richard was quick to respond, saying, “The victory gallop!”