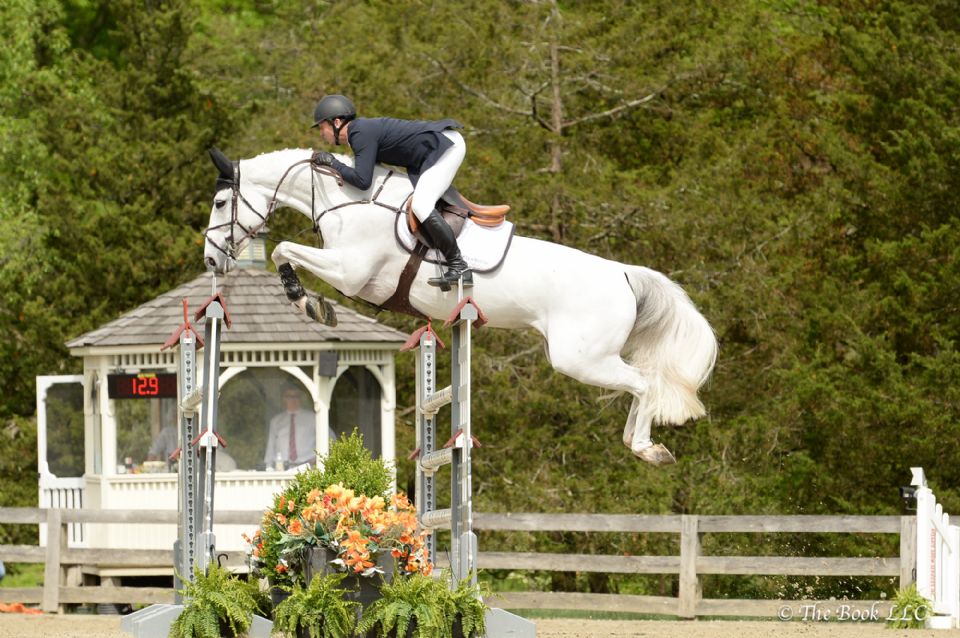 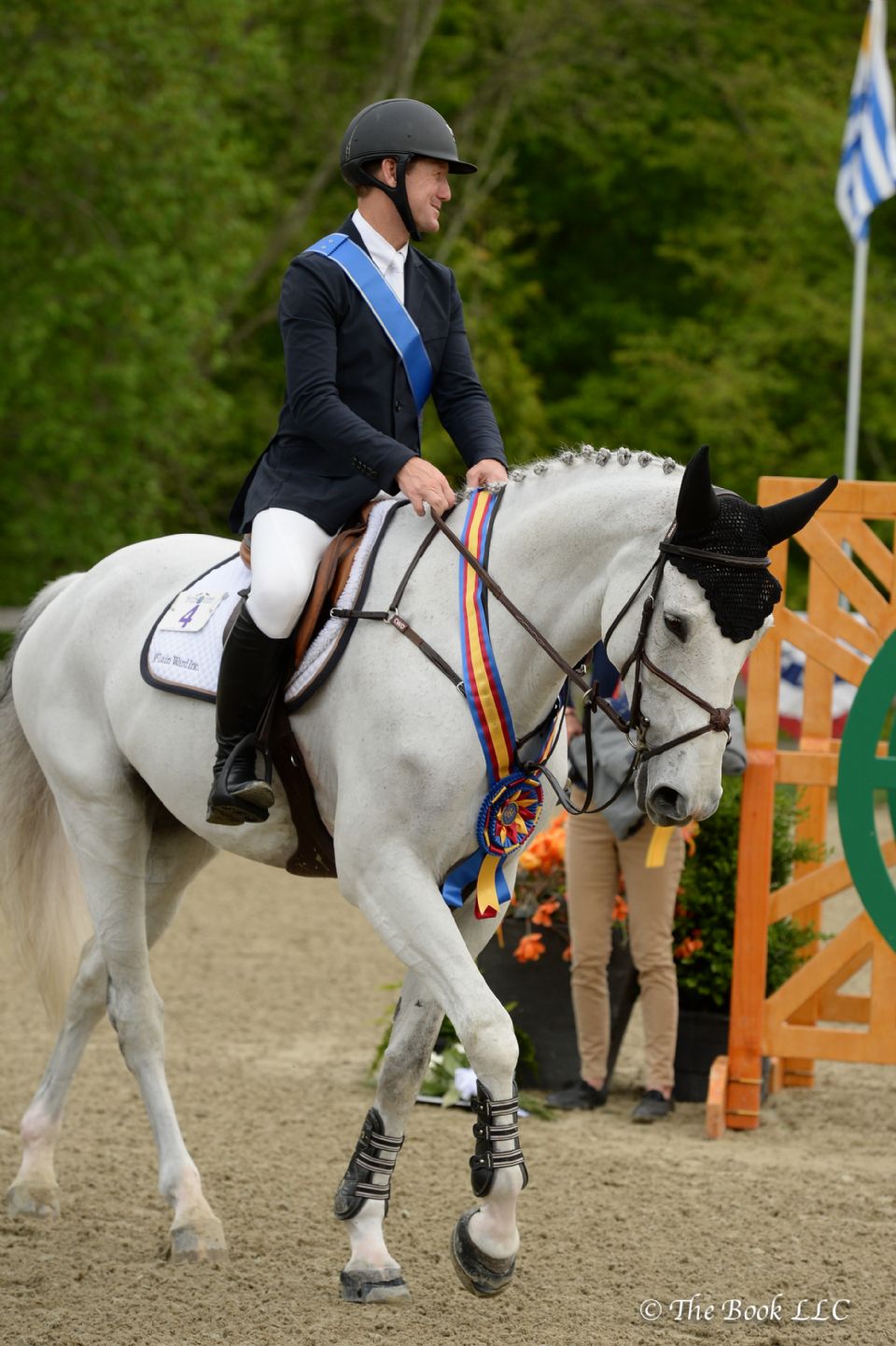 McLain Ward (USA) and Clinta were presented as winners of the $35,000 Welcome Stake of North Salem CSI3* on Thursday, May 17, during the 2018 Old Salem Farm Spring Horse Shows at Old Salem Farm in North Salem, NY.
Photo by The Book 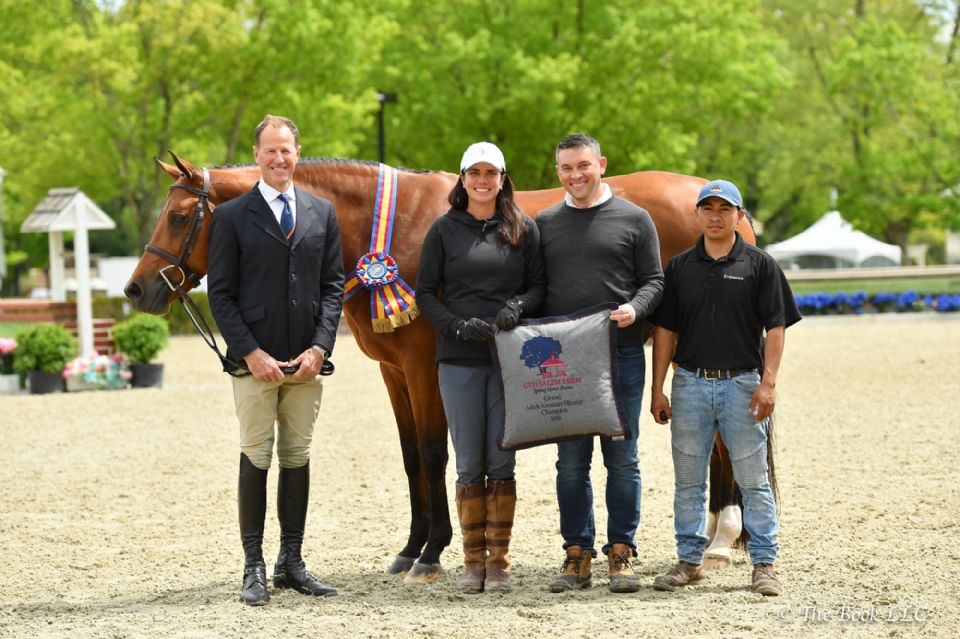 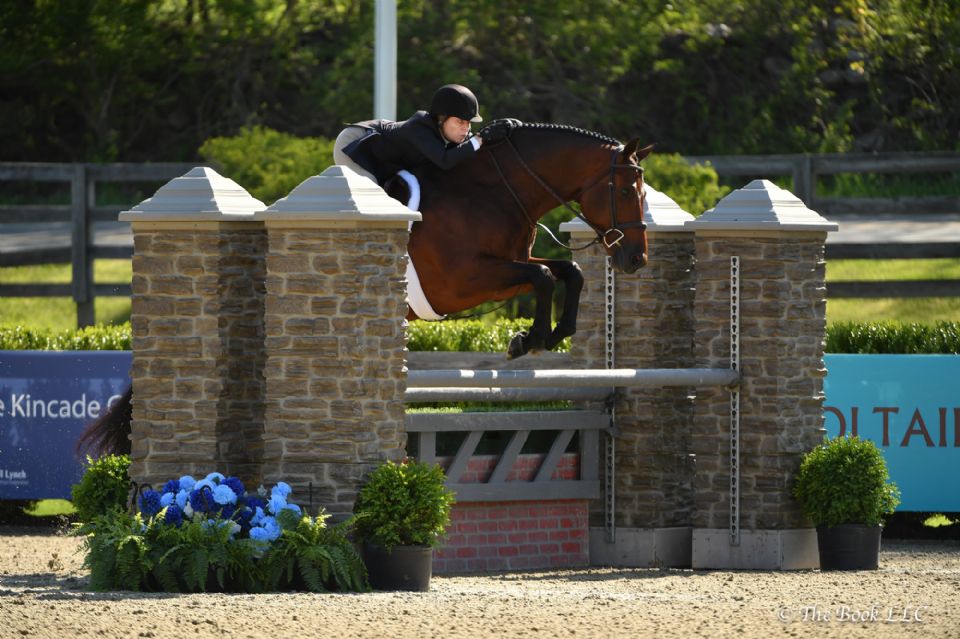 .S. Olympic team gold medalist McLain Ward of Brewster, NY, earned an impressive win aboard Clinta in the $35,000 Welcome Stake of North Salem CSI3* on Thursday, May 17, at the 2018 Old Salem Farm Spring Horse Shows, running through May 20 at Old Salem Farm. Hunter competition was highlighted with a Grand Adult Amateur Championship title for Forever, ridden and owned by James Anderson.

Coming off a recent CSI5* victory at the Longines Masters of New York just three weeks ago, Ward proved the versatility of Clinta, an 11-year-old Oldenburg mare (Clinton x Lord Pezi), owned by Sagamore Farms, by claiming a win outdoors at Old Salem Farm. The indomitable duo bested a field of 59 over courses designed by Alan Wade (IRL). Crossing the timers in 37.32 seconds, Ward posted the fastest jump-off round by one one-hundredth of a second over runner-up Brianne Goutal-Marteau (USA).

“It was good fortune,” said Ward of his narrow victory. “Brianne’s horse is a bit of a faster horse. He can’t quite cover the ground the way Clinta can, but he’s quicker over the jumps. [Clinta] loses a little time in the air and I was galloping, but I wasn’t going full speed with her. I tried to execute the plan and it would fall where it would.

“The [Longines Masters of] New York was a boost of confidence and showed us we were headed in the right direction,” continued McLain on the progress of Clinta, a mare he added to his string at the end of the winter season in Florida. “I wanted to show her here at Old Salem to get on the grass once before going to Europe, but unfortunately the weather is not cooperating with us. We’re lucky this venue has such great all-weather arenas to fall back on.”

Ward considered not returning for the jump-off and saving Clinta for the $131,000 Empire State Grand Prix CSI3* on Sunday, but decided to take the opportunity to learn more about his new mount, saying, “I wanted to do the one inside turn on the oxer because I haven’t really done that with her to an oxer. I thought I needed to experience that at some point and see how she reacts, and she performed great. Every round I have with her, I know her a bit better and probably take a little bit of a breath myself.”

Goutal-Marteau and Fineman, owned by Rose Hill Farm, settled for second place in 37.33 seconds, while Daniel Bluman (ISR) took third in 37.64 seconds riding Cartouche for owner Over The Top Stables, LLC. Peter Wylde (USA) finished fourth in 37.85 seconds riding Canamera 2 for owner Kathleen Kamine, and Devin Ryan (USA) rounded out the top five aboard his own Cooper in 38.63 seconds.

Anderson, who has owned the nine-year-old Westphalian gelding (Rock Forever – Piana) for two years and trains with Jenny Dunion, was thrilled with his horse’s performance over the two weeks.

“Last week was the first week I’ve been champion at this horse show, so to be champion two weeks in a row and then Grand Champion is amazing,” he expressed. “Showing yesterday, it was our first time in the rain with this horse. He was awesome, super consistent, and we won both of our jumping classes yesterday.”

“I was so proud of both of them,” said Dunion. “I’ve had this horse since he was young. James works so hard at what he does. It’s so nice when it comes together with the results. It’s really special.”

After consistency in the Adult division at the three-foot height for two years, Anderson and Dunion have plans to move up the Amateur-Owner Hunter 3’3” division.

For Dunion, winning is also special thanks to the venue at Old Salem Farm.

She noted, “It’s a local show for us. We’re based in Bedford, NY, in the spring, so it’s really nice to be a part of a hometown show that I’ve been coming to for over 20 years.”

The reserve championship in the Adult Amateur 50 & Over Hunters went to Meredith Lipke riding her own Eleventh Hour. They placed second in two over fences classes and won the under saddle.

Spectators are welcome at the Old Salem Farm Spring Horse Shows with free general admission to Old Salem Farm Wednesday through Friday. On the weekend of 19-20, admission is $15 for adults and $10 for seniors and children under 12.