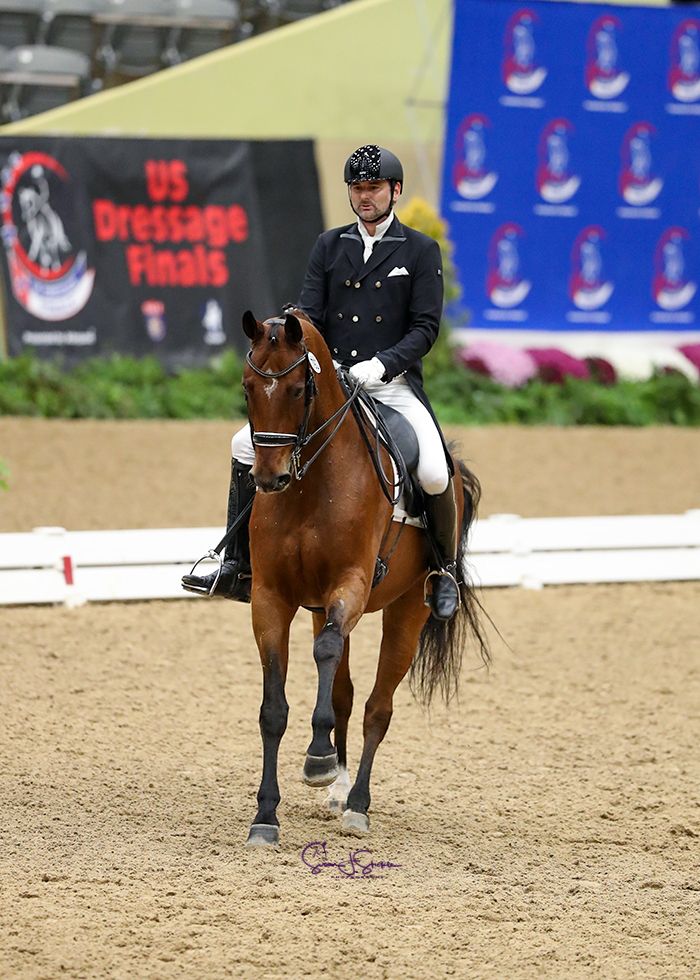 Anartz Chanca rides the 10-year-old Dazzle to the top of the leaderboard in the Intermediate II Adult Amateur division with 66.765%.
Photo by SusanJStickle.com 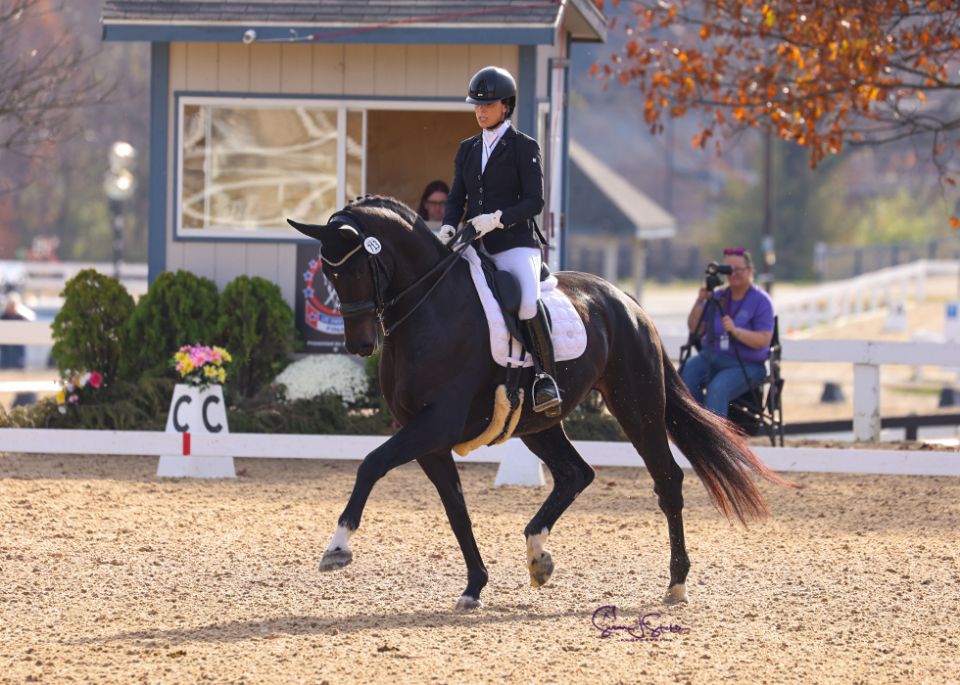 Marta Renilla and the Blue Hors Zack son Zalando M.R. are untouchable in the Third Level Open championship, securing the title with 73.25%.
Photo by SusanJStickle.com 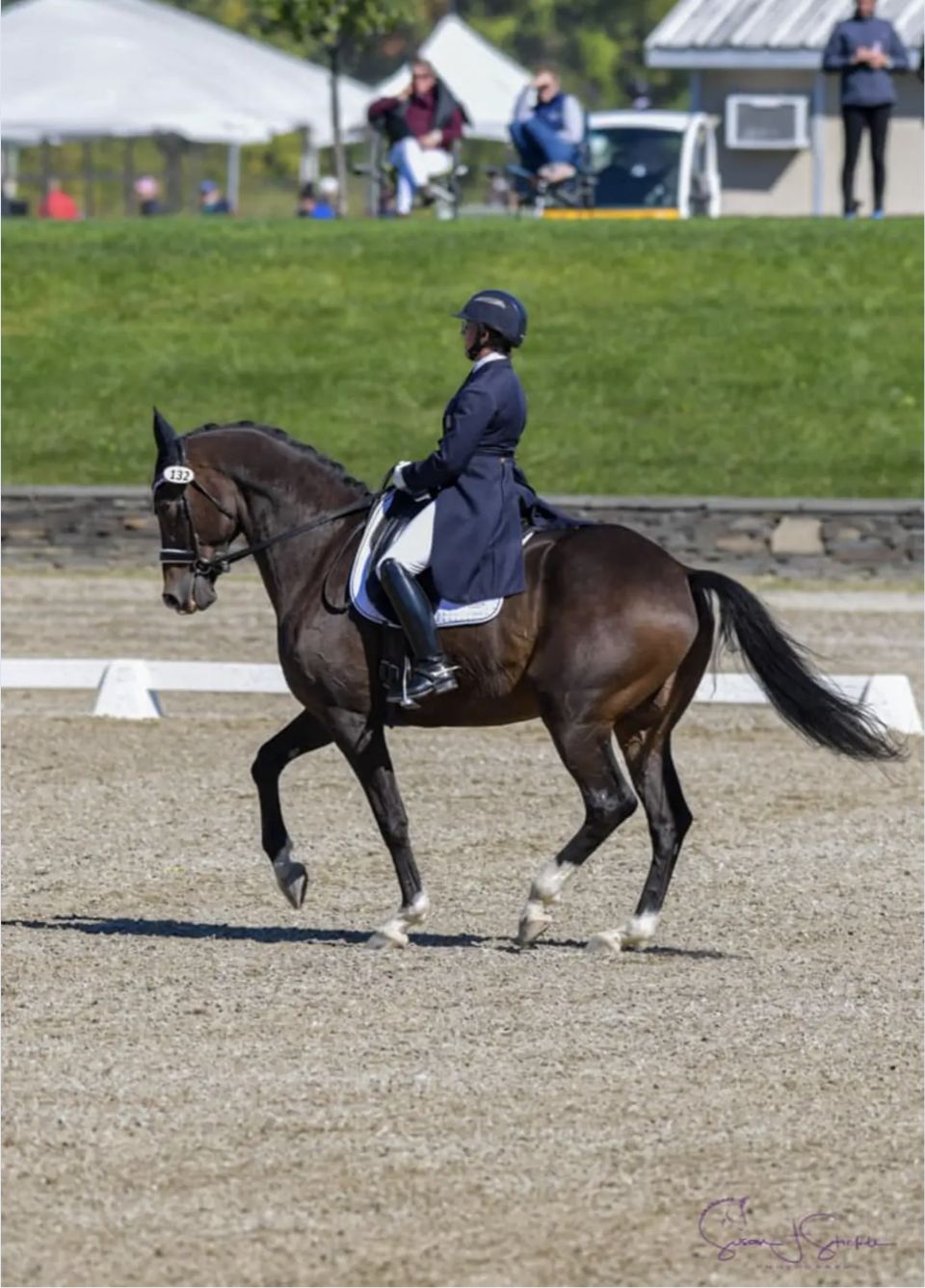 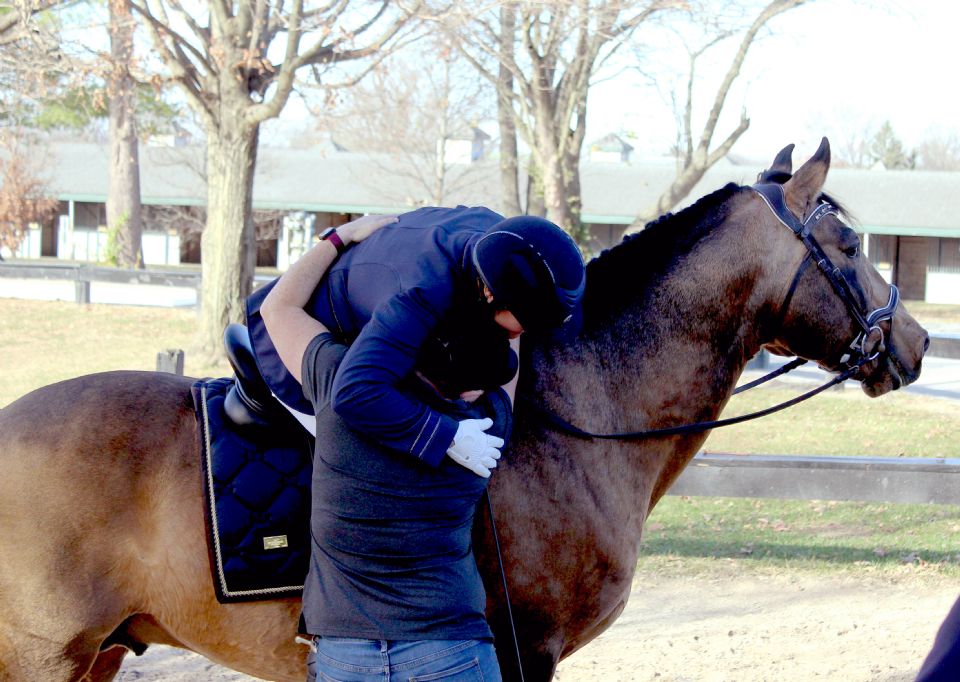 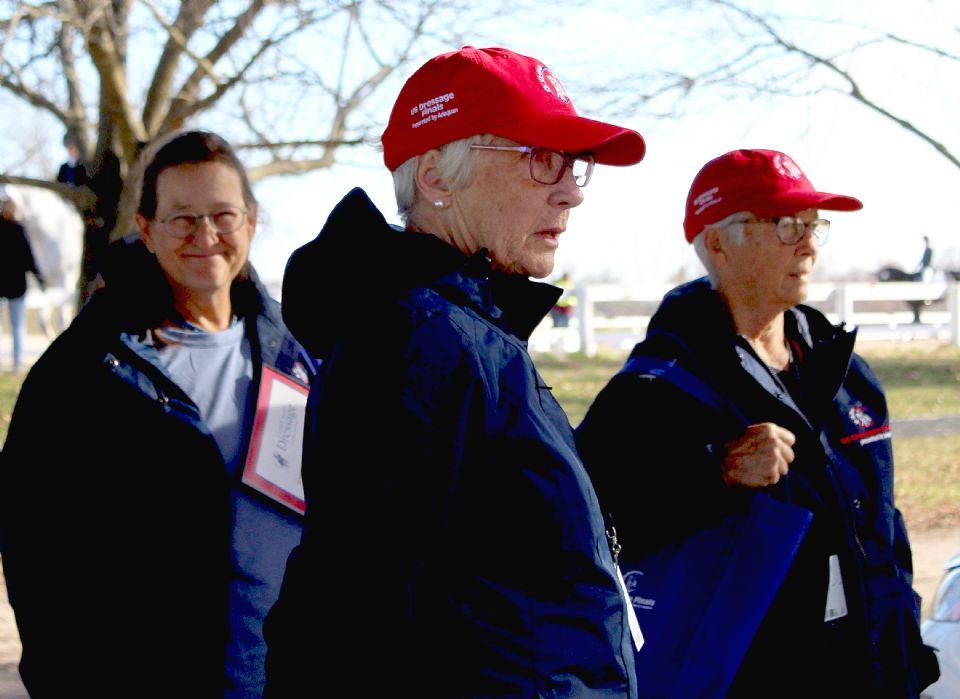 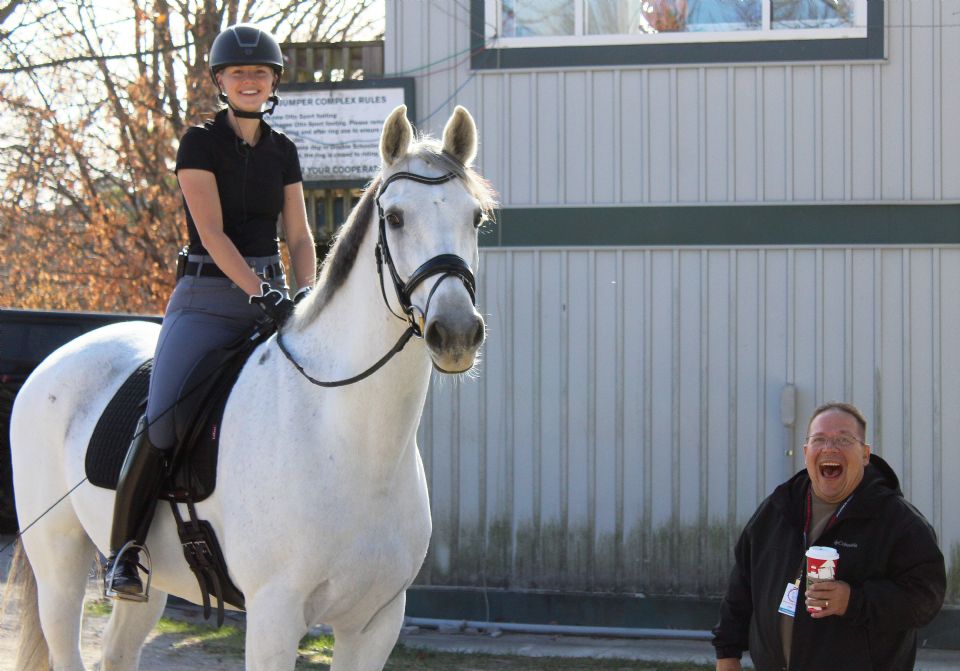 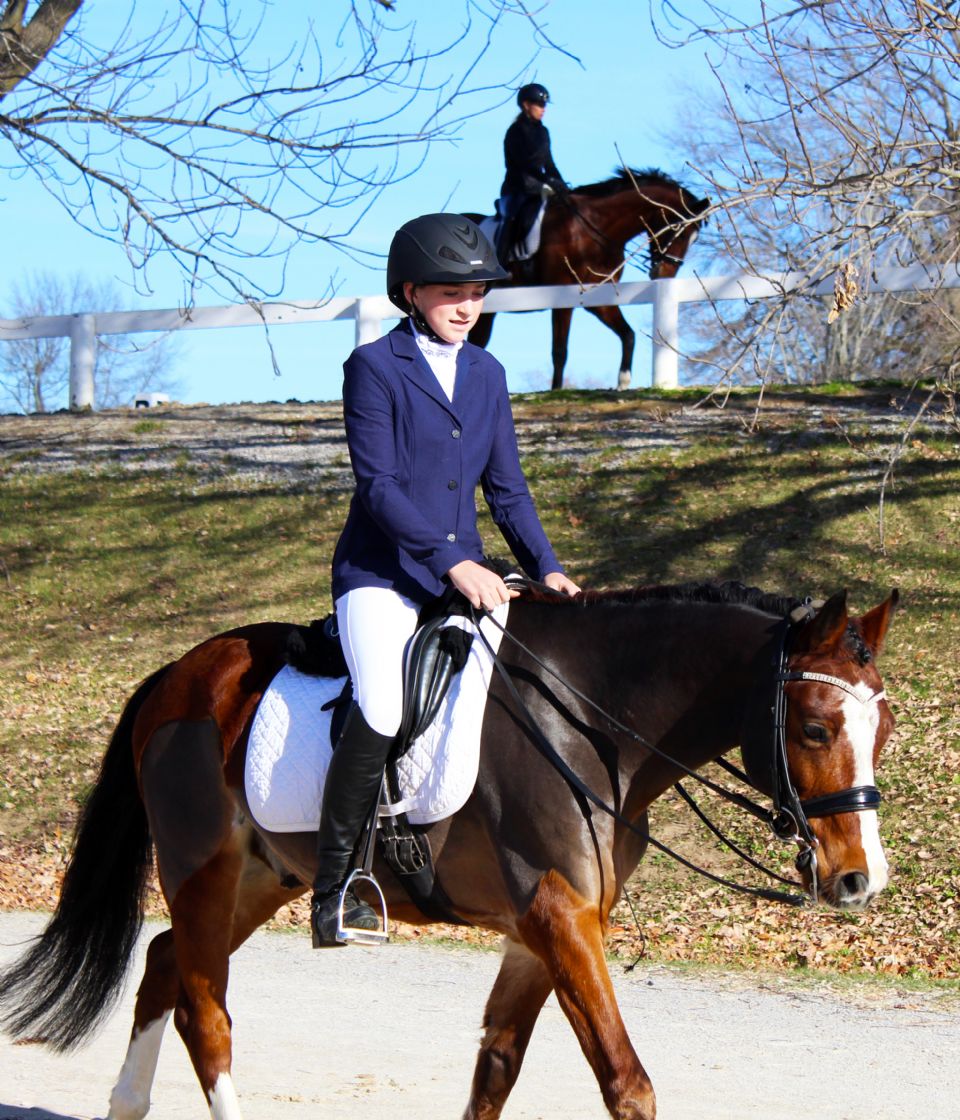 Competitors flooded into the Kentucky Horse Park for the 2022 US Dressage Finals presented by Adequan® for the opening day of the show on Thursday, November 10. The national showcase — which competitors qualify for via Regional Championships in nine USDF regions — offers a wealth of championship titles and over $120,000 in prize money. Competition runs through Sunday, November 13.

It was an extraordinary day for one family in particular, with husband-and-wife duo Anartz Chanca and Marta Renilla both claiming championship titles. Not only did they both win, but they were each riding a horse originally intended for the other.

The first of the 2022 titles went to Chanca, who rode his own Oldenburg gelding Dazzle to an unassailable 66.765% in the Intermediate II Adult Amateur class. At 10 years old, the son of Danone I out of a Londonderry dam was the youngest horse in the field of nine starters. They scored sevens across the board from the three judges for general impression, which carries a double coefficient.

This is the second time in two years that the pair have come away with a championship win, having topped the Amateur Intermediate I Freestyle in 2021. Chanca’s rise from Training Level to Big Tour has been meteoric. His background was in endurance horses in his native Spain – and he had a stint as a jumper – but in 2013, he went down the centerline for the first time and has never looked back.

“I’m feeling very proud of Dazzle,” enthused Chanca, who is based with his wife at her family’s Woodlands Equestrian Club in Tomball, Texas. “He felt great in the arena. He’s only 10, so it’s his first year at Inter II and Grand Prix, so I’m very happy with him. This year he qualified for the Developing Grand Prix Horse at Lamplight, but he developed crazy hives which got out of control in a matter of hours, and we had to scratch. I was really worried about him. Just the fact that he qualified for this and that he’s here and healthy and going strong — I couldn’t be more proud of him.”

Dazzle was originally bought for Renilla but was then sold to a junior rider. A few years later Chanca had the opportunity to buy the horse back and jumped at the chance.

“I always thought he was a heck of horse, and now he’s not going anywhere. I made that mistake once already,” grinned Chanca, who will also contest the AA Grand Prix and Grand Prix Freestyle classes at this year’s Finals. “Being here is such a pleasure and a gift. We have such busy lives, with kids, the horses, and my job [he is the president of the American subsidiary of an Italian company that manufactures truck parts]. We love this show; ever since we became U.S. citizens in 2018, we haven’t missed it.”

Renilla captured the Third Level Open championship riding her family’s German-bred Zalando M.R. to 73.25%, chased closely by the reserve champion Martin Kuhn, who was just 0.083% behind. It was only the third show for Renilla and Zalando as the horse had to undergo major surgery.

“My husband bought him in Germany as a project, but then he had to have surgery that took him out of business for a year,” she explained. “He had a cyst that we didn’t spot in Germany, so we had to put four screws in his hock. I started riding him as a seven-year-old at the beginning of the year, but he felt more like a four-year-old.

“I slowly developed him on the basics and when he got strong, the movements came effortlessly to him. I waited until just before regionals to qualify, then my second show ever with him was regionals and now here we are at Third and Fourth Level and we’re champions,” added Renilla, who rates the horse as a phenomenal Grand Prix prospect. “He’s a horse that gives you 300% — almost too much sometimes. I was so impressed how he stayed with me through the whole test despite his inexperience. That shows our relationship, and I couldn’t be more grateful to have this guy in my life.”

Zalando is by Blue Hors Zack out of a Rubinstein dam, and “he combines dad’s power and hotness with the rideability of the Rubinstein line,” adds Renilla. “He’s really a special horse. Even though he was bought mainly for my husband, I stole the ride on him after the surgery, and now he’s saying he might steal him back, but I say, ‘No!’ His horse Dazzle was my horse, but he wasn’t my cup of tea.”

The couple plan to celebrate their monumental day with an early night — “a real treat” for them given their hectic home lives, full barn, and three children.

Mason is Queen of the Intermediate II Championship — Again

In the lead up to the show, Heather Mason declared that her horse RTF Lincoln “loves the Alltech Arena” and he proved her right by claiming the Intermediate II Open championship on Thursday. This is the third time in a row that the pair have scooped this particular title.

The 17-year-old son of L’Andiamo scored 68.431%, garnering two eights for his piaffe. Mason bought Lincoln as a foal and then sold him on but ended up buying him back for $1 when the new owner had to have a hip replacement. The pair will also defend their Open Grand Prix Championship title during Saturday night’s gala feature class. Read more on them below in our Competitor Spotlight!

Competition resumes on Friday, November 11, with eight championship titles up for grabs from Training Level to Grand Prix. Follow the action via the USDF Facebook page and the US Dressage Finals website, plus live online streaming on the USEF Network. To learn more about the US Dressage Finals presented by Adequan®, view results and day sheets, and read daily news releases, visit the official US Dressage Finals event website.

The New Jersey-based rider and trainer Heather Mason has a busy week ahead of her. Not only is she showing four of her own horses, but she has brought a whole family of students and clients and their horses along, too. Despite it being a 13-hour drive, Mason has competed at Finals every single year that it has been held.

“I make it a point to bring clients — both professionals and amateurs — here,” explains Mason, who brought three trailers with eight horses from her barn alone. “It’s a nice show, it’s a big show, and it’s great exposure for the horses and a great end to our year.”

“He’s very quirky, very spooky, and can be very hot,” says Mason, “but he can also be quiet and can trigger from one to the other very quickly. However, he loves to show, and he likes the Alltech Arena. He’s 17 now, so I don’t know how many more seasons we have. I decided to come back and do it all again. He is the defending champion, but it’s always one test at a time.”

Lincoln has been a boomerang horse for Mason.

“I bought him from the breeder, Cornell University,” she explains. “I then sold him as a three-year-old but continued to compete him for the new owner as he was so difficult. Then, when he was at fourth level, the owner had to have a hip replacement and decided she would never ride him again, and I ended up buying him for one dollar.”

Mason’s small tour horse New Beginnings is a home-bred nine-year-old Oldenburg, by her old stallion Nimbus, who will contest Fourth Level and Prix St. Georges at this Finals. He is 17.1 hands high (Mason is only five feet, two inches tall), but his full sister Nicene is a full hand shorter, at 16.1 hands high. Nicene is competing under the Adult Amateur rider Alexandra Krossen at Fourth Level. Krossen is also riding GPFS Damani at Grand Prix Level, and Looker SCF, who was bred by Sporting Chance, at First Level.

“He’s probably the smartest horse I’ve ever owned and not as hot as his breeding suggests,” adds Mason of the compact five-year-old. “He’s the quickest learner and loves to show — he turns it on in there.”

She will also be competing another Oldenburg, Shmoky Quartz, which she acquired in February due to his questionable x-rays.

“I was contacted by his breeder, Mo Swanson, who said that he was sold and vetted but the x-rays were not good,” explained Mason. “He’s always been sound, and she wanted to give him a chance and I got a good deal on him. He’s fantastic, and my vet said he’s worth a chance. I don’t ride the X-rays, I ride the horse; he’s the sweetest horse with so much power.”

Mason will compete him at Training Level, First Level, and First Level Freestyle. All her freestyles have been put together by a former student, Kevin Whitney, who started by making a soundtrack for her own horse, and now compiles them for Mason as a hobby.

Mason’s influence cascades down at this year’s Finals. Not only does she have a large group of students, but many of them have their own students whom they are coaching at the show.

The 2022 US Dressage Finals presented by Adequan® is off to a strong start! Click HERE to watch!