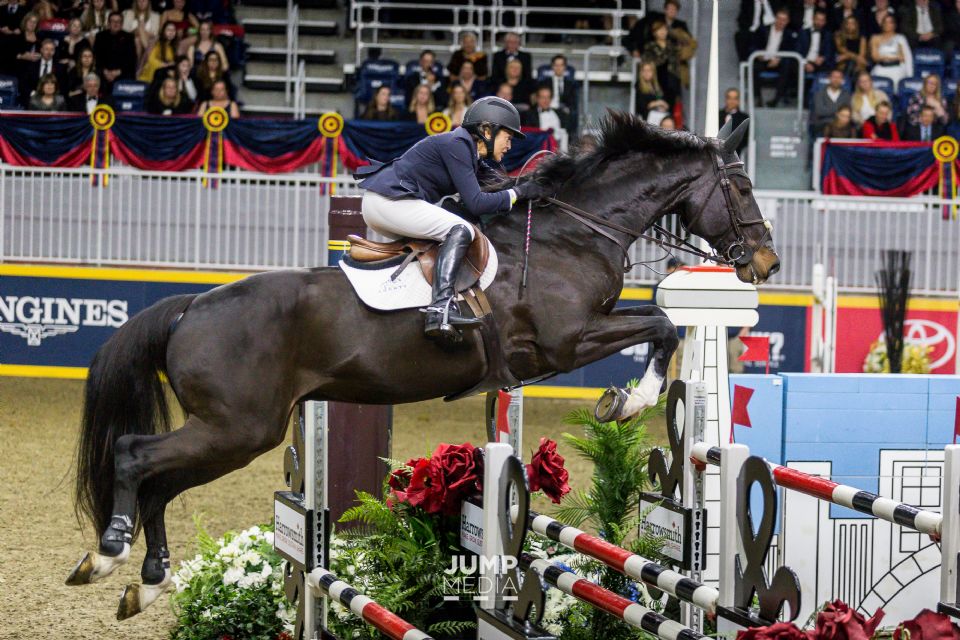 Margie Engle and Dicas on their way to a top-10 finish in the $210,000 Longines FEI Jumping World Cup™ Toronto at the Royal Horse Show, held as part of the Royal Agricultural Winter Fair in Toronto, Ontario, Canada.
Photo by Jump Media

U.S. Olympian Margie Engle was named the Martha Jolicoeur Leading Lady Rider on Saturday evening, November 9, during the award’s debut at the Royal Horse Show, held as part of the 97th annual Royal Agricultural Winter Fair, in Toronto, ON.

The Leading Lady Rider Award was presented at the CSI4*-W Royal Horse Show for the first time in 2019 and recognized the high-score female rider based on performances in the international show jumping division. International competition at the Royal Horse Show included four days of events, highlighted by the $210,000 Longines FEI Jumping World Cup™ Toronto, a sought-after qualifying event for the 2020 Longines FEI Jumping World Cup™ Final in Las Vegas, NV.

“I would like to thank Martha for offering such a great award at one of my favorite horse shows, and supporting our industry the way she does,” said Engle, 61, who hails from West Palm Beach, FL, and has won at least one Martha Jolicoeur Leading Lady Rider title each year at various events since the award’s inception nearly 10 years ago. “Our sport is special because men and women compete against each other, but it is a great honor to win an award created for the women who have top performances worth celebrating at the end of a show.”

In honor of her Leading Lady Rider Award, Engle was presented with a custom pendant necklace from Canadian-based company Horse Features Jewelry. The necklace was hand-selected by Jolicoeur at the Royal Agricultural Winter Fair’s iconic trade fair.

“I am proud to bring this award to Canada after watching it become a coveted title at horse shows along the east coast of the United States,” said Jolicoeur, who sponsors the award weekly during the 12-week Winter Equestrian Festival in Wellington, FL, among other events. “The Royal is such a special occasion for Canadian horse sport as well as international riders from around the globe, and it is one that draws such an impressive crowd of knowledgeable horse sport fans. It was a real honor to be a part of the event and to present Margie with this special award.”

An accomplished rider in her own right, Jolicoeur is a member of the elite Douglas Elliman Real Estate Sports and Entertainment division and was named the No.1 realtor in the Wellington, FL, market as well as No. 1 in Florida overall for 2018.

To find out more about Martha W. Jolicoeur and her wide range of property listings, visit www.marthasproperties.com. Also, find her on Facebook and Instagram for a behind-the-scenes look at her available Wellington properties.