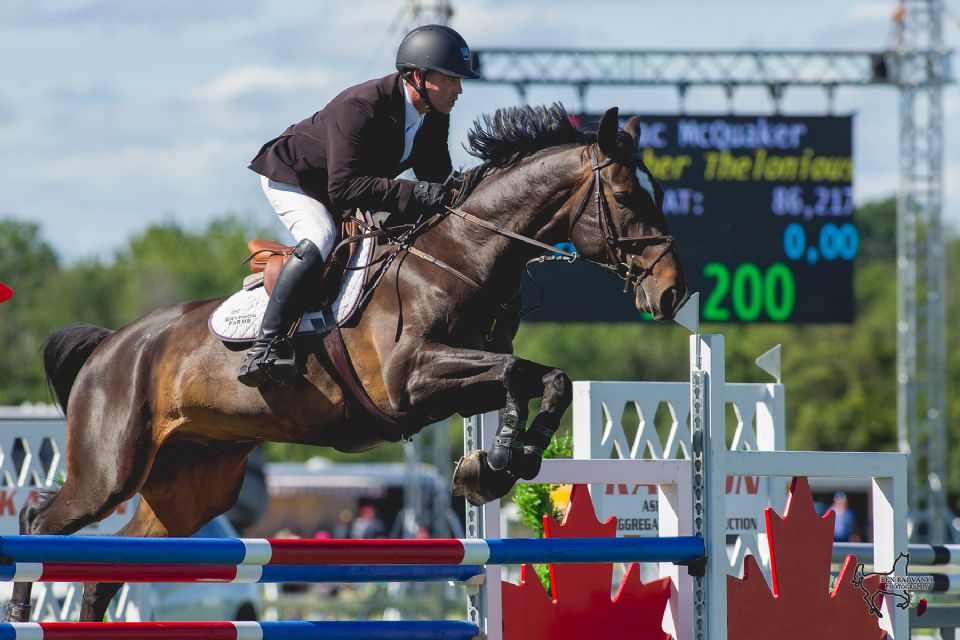 Mac McQuaker and Brother Thelonious on their way to victory in the $7,500 Lynn Millar Memorial Speed Derby on Friday, June 19, at the Ottawa International Horse Show at Wesley Clover Parks.
Photo by Ben Radvanyi Photography. 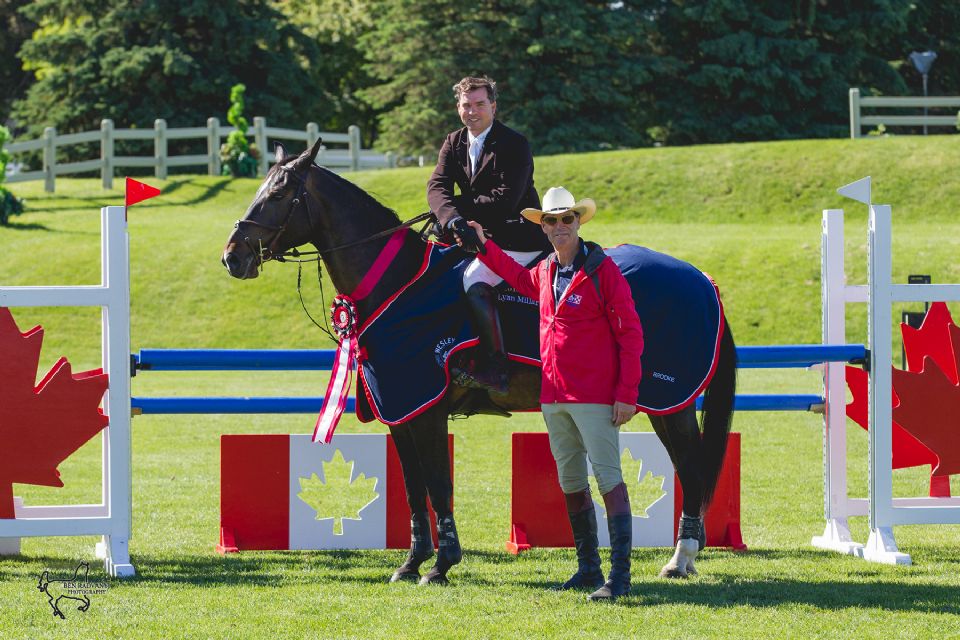 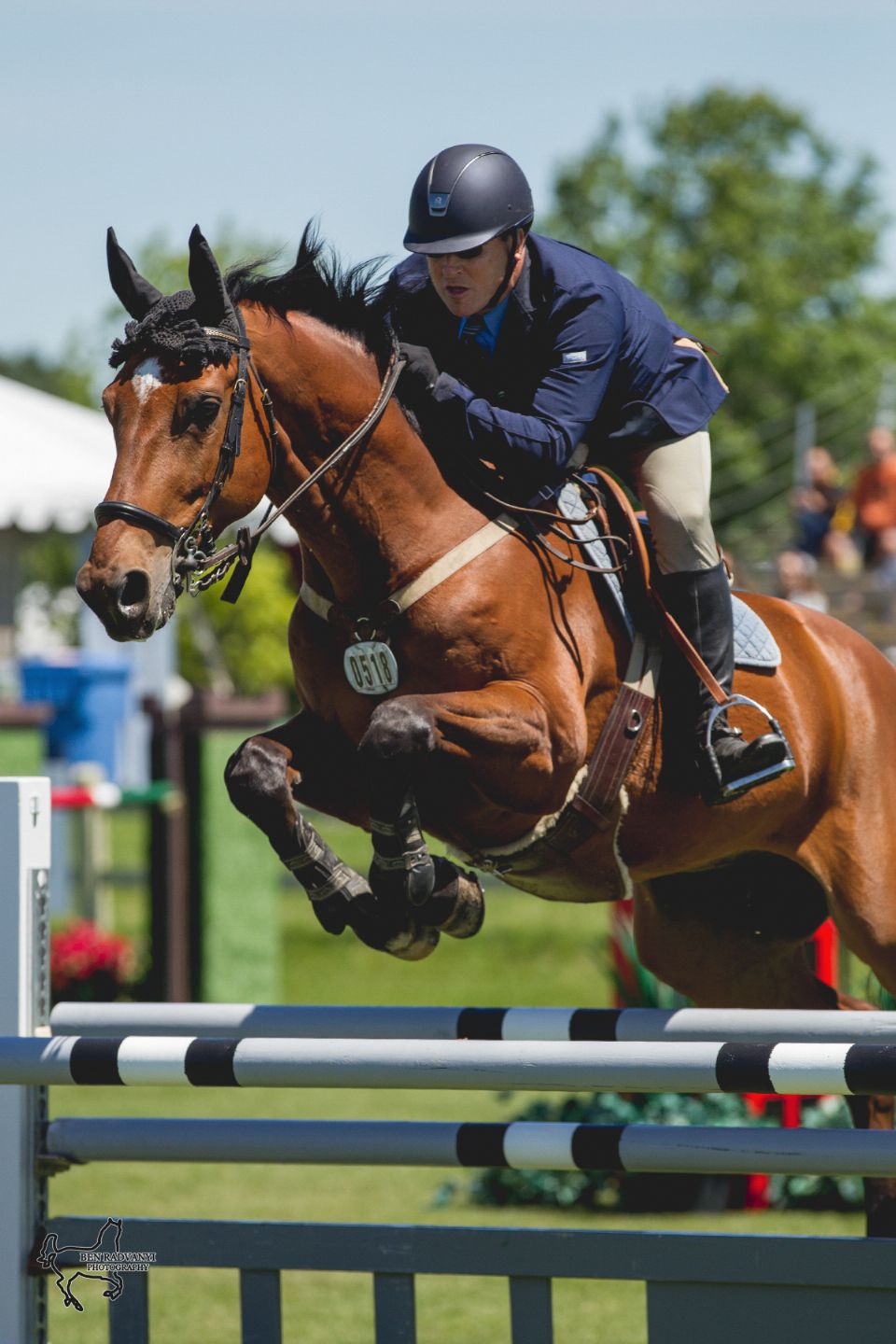 All eyes were on the clock on Friday, June 19, as Mac McQuaker contested the $7,500 Lynn Millar Memorial Speed Derby at the inaugural Ottawa International Horse Show running June 17 to 21 at Wesley Clover Parks in Ottawa, ON.

McQuaker of Schomberg, ON, impressed with the eight-year-old Polish-bred gelding Brother Thelonious, owned by Heartland Sport Horses Ltd of Winnipeg, MB. The pair’s time of 84.12 seconds to complete the dynamic track set by course designer Guilherme Jorge of Brazil proved quick enough for the win. It was the first time that McQuaker and Brother Thelonious had contested a speed derby, but beginner's luck paid off.

“He's a new horse for us – we picked him up in Poland last fall – and he is coming along really nicely,” said McQuaker, who operates Gryphon Farms with his wife, Christi. “In Poland they do anything and everything, including cross country, so I wasn't surprised when he took to the natural obstacles as well as he did. He's never looked at anything so far and that allowed me to take a bit of a chance.”

McQuaker stole the lead from 13-year-old Sam Walker of Nobleton, ON, aboard his own Andino Z. Walker, who posted a time of 86.21 seconds for second place, was the youngest competitor in the class, gamely competing against riders many years his senior.

“I had a lot of fun, the course designer built a really good track and the horses jumped great,” said Walker. “I was really excited because I have never jumped in such a class before, but it was nerve wracking considering the pros that I was riding against. It was an honour to jump with those riders.”

Behind Walker, Katie Bowles of Toronto, ON, clinched third place with a time of 90.15 seconds riding her own Valentijn. Caroline Thibault of Carignan, QC, finished fourth on Nature des Pierres in a time of 90.65 seconds for owner Christina MacDougall.

Thursday's $10,000 Open Welcome winner, Amy Millar of Perth, ON, and Rosemary Burton's Rio Rosetta rounded out the top five in the class that was presented in memory of Millar's mother. Lynn Millar was the devoted matriarch of the Millar family and has been sadly missed by the equestrian community since her passing in 2008. She was an outstanding horsewoman and integral part of the Millar family’s show jumping success, including the development of Millar Brooke Farm, and the achievements that made her husband, Ian Millar, Canada's most decorated equestrian.

McQuaker was happy to be part of the tribute and event happier to end up on top, jumping Brother Thelonious flawlessly over unfamiliar fences, which included use of the Grand Prix field's grass bank and the dreaded dike.

“The course allowed you to make a few mistakes and, at a height of 1.20m, you could get away with it, but it was a great way to get back into this ring and do a derby, which turned out to be very competitive,” said McQuaker, who was pleased to be showing in Ottawa again. “We have a long history of coming to this facility that dates back to the 80s, and I am really happy to see it back up and running. They have made huge improvements and I know it's going to grow and grow.”

Ian Millar was waiting on the sidelines to present McQuaker with the winner's awards, which was a highlight in itself.

“For 20 years, I've been handing him ribbons and coolers,” joked McQuaker, who has also been involved in the sport as a competition manager and organizer. “It was nice to get one from him, especially one that's in memory of his wife.”

Earlier in the day, Grant Field of Stouffville, ON, earned the top spot in the $5,000 Jump Canada Talent Squad, presented by RBC Wealth Management Dominion Securities, riding Baffin. Field and his ten-year-old Polish-bred gelding were the only contenders to leave all the rails up, crossing the timers clear in 87.25 seconds to take the win with one time fault.

“This horse is a true competitor,” said Field. “A lot of horses are good at what they do, they like it and that's fine, but this is the one-in-a-million horse that looks around and says 'I can jump better than all these horses'. With that personality, he pats you on the back and convinces you that you're going to be fine.”

Field left his Deerfield Farm at 3 a.m. on Friday morning to arrive at Wesley Clover Parks specifically for the Ottawa stop in the Jump Canada Talent Squad Series. He also contested the Series with Baffin throughout the 2014 season as well.

Behind Field, the fastest of the four-fault rounds belonged to Muhammad Itani of Essex, ON, and his own Tax Free. With one rail and a time of 77.517 seconds, they claimed second place, while Taylor Mulligan of Merrickville, ON, rounded out the top three with one rail in 77.542 seconds aboard Social Network for owner Robert Taylor.

RCMP Musical Ride
To celebrate the inaugural Ottawa International Horse Show, the famed Royal Canadian Mounted Police (RCMP) Musical Ride took a break from its national tour to return to Ottawa for a special performance at Wesley Clover Parks on Friday evening. Not a single seat surrounding the Grand Prix Field was left empty as more than 3,000 spectators spilled into Wesley Clover Parks for a glimpse of the RCMP's impressive and patriotic routine.

On Saturday, the $35,000 Brookstreet Grand Prix takes center stage at 2 p.m. to highlight the Ottawa International Horse Show. Show jumping fans unable to be in attendance can still enjoy the broadcast live by clicking here to watch. The $10,000 Canadian Hunter Derby caps off the week on Sunday.