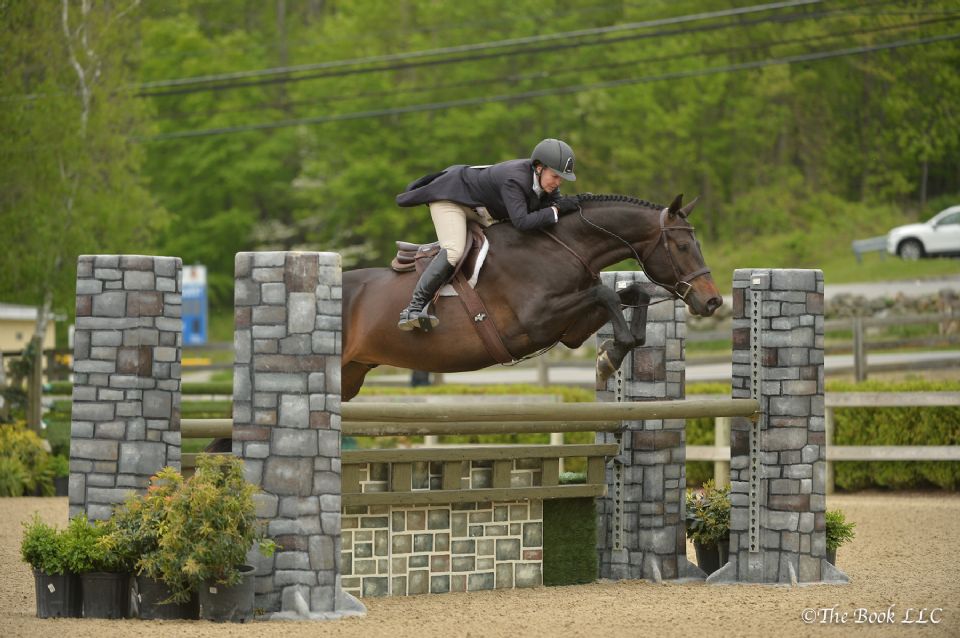 Louise Serio and El Primero.
Photo by The Book LLC 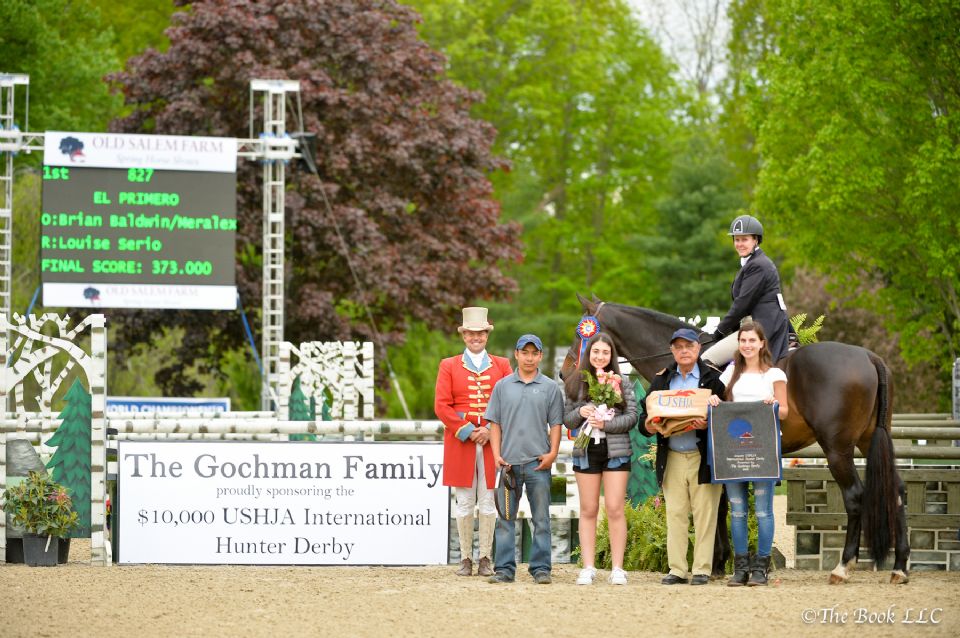 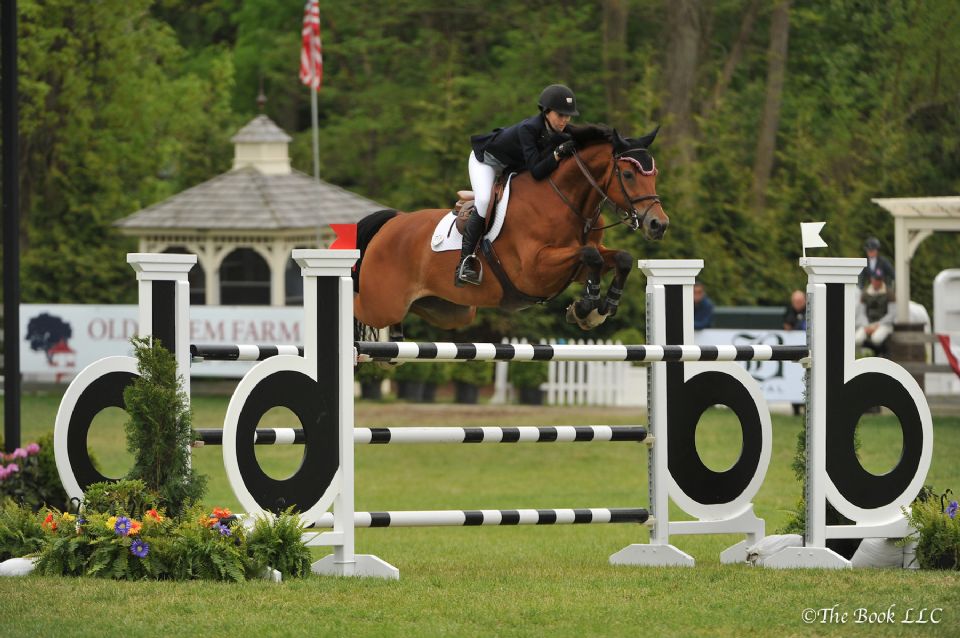 Lucy Deslauriers and Hester.
Photo by The Book LLC 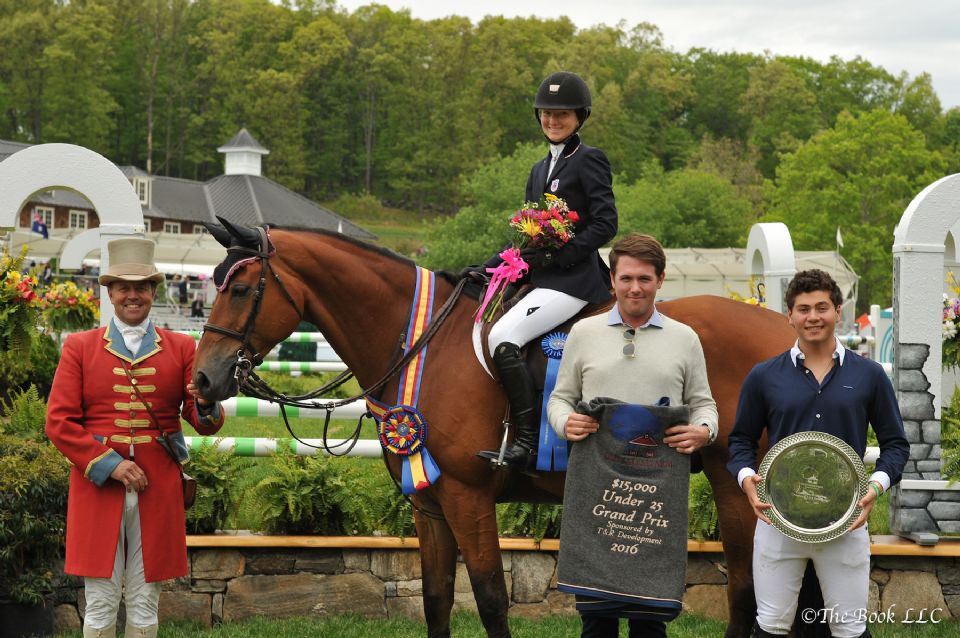 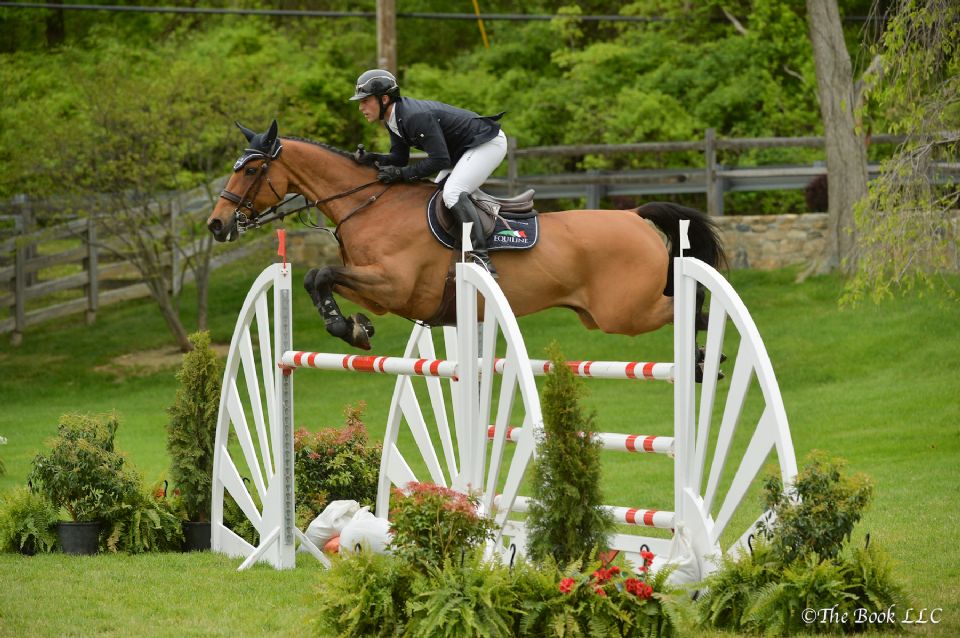 Mattias Tromp and KM Whatever RV.
Photo by The Book LLC


Serio and El Primero, owned by Bryan Baldwin and Meralex Farm, were the ones to beat in the first round of derby competition. They bested a field of 28 with a total score of 183.5 before returning with the top 12 for a handy round built by course designer Kevin Giblin of Spring Lake, NJ. El Primero, a seven-year-old Dutch Warmblood gelding by Numero Uno, bested his own first-round score over the second-round handy track, scoring a 189.5 for a two-round total of 373 and the win for Serio.


Sydney Shulman of Greenwich, CT, combined scores of 177 and an impressive 195 aboard Cosmeo for DK-USA Sporthorse, LLC to finish with a 372 and second overall. Sloane Coles of The Plains, VA, boasted the highest score of the day with a 198 over the handy course in the irons of Nilani Trent's Autumn Rhythm, which combined with her 171 from the first round for third on a 369. Jimmy Torano of Wellington, FL, and Palm Meadow Farm, LLC's Walk About took fourth with a final score of 358, and Kelly Tropin of New Canaan, CT, capped the top five on a total score of 356 with Chablis for Libertas Farm, LLC.


Originally the ride of Sandy Ferrell, El Primero was imported from Stal Hendrix in the Netherlands and got his start in the hunter ring in January of 2015. After an injury sidelined Ferrell from the show ring during the 2016 winter season, Serio took over the reins on the horse known as “Primo” around the barn.


“He’s a dream to ride,” said Serio. “He’s really responsive; he can lengthen and shorten his stride easily. He’s one of the most adjustable horses I’ve ever ridden and so light in his mouth. He's a lovely ride.”


After impressing at the 2015 USHJA International Hunter Derby Championships with Ferrell in the tack, El Primero has proved that he has the scope to turn heads in the hunter ring. But, according to Serio, he also has the rideability and style to complete the package.


“He was really good today,” she said. “The courses definitely had some questions in them. It walked different than it rode, which was interesting, but I like it when they challenge us a little bit. We’re going to Devon, so we had perfect pre-Devon courses.”


Serio continued, “The judges said they wanted to see good jumping; they weren’t particularly interested in the strides.”


Good jumping is exactly what she delivered to cap a successful two weeks at Old Salem Farm for Derbydown.


“I have to tell you, I haven’t had this good of a horse show in years,” she said with a smile. “My horses have gone beautiful, and my students have done well. It’s been an amazing two weeks.”


A familiar face at the Old Salem Farm Spring Horse Shows, Serio always looks forward to kicking off her spring season in North Salem, NY. She said, “I like the rings, the footing is really nice, and I really like this area. And to top it off, we were blessed with good weather this year.”

Lucy Deslauriers (USA) and Hester were the fastest double-clear pair by a margin of five seconds to win the $15,000 Under 25 Grand Prix, presented by T & R Development. They conquered courses built by Alan Wade (IRL) with a blistering jump-off time of 34.759 seconds.


Danielle Menker (USA) and Emily Wygod's Beluga took second in 39.749 seconds, while Katherine Strauss (USA) and her own All In were third with four faults and a time of 36.262 seconds. Anna Cardelfe (USA) and her own Dollar Van T Eigenlo DH took fourth on a four-fault jump-off round in 38.202 seconds, and Stephen Moore (IRL) piloted Team de Coquerie to fifth on four faults in 39.295 seconds for Vlock Show Stables.


Deslauriers is a regular competitor in Under 25 competition and was eager to be part of the first-ever event for young jumper riders at Old Salem Farm.


“It’s true that it really bridges the gap between the junior jumpers and the grand prix ranks, in not only the height, but the difficulty,” she said. “All of that combined to make a great in-between [division] for [those riders] wanting to eventually move up to the grand prix.


“I thought it was a nice course; it was pretty inviting,” continued Deslauriers. “There was a water element and I haven’t jumped water out here yet, so that was a nice addition. The triple came at the end of the course, which got a few horses thinking they were done. All around, there were different tasks and questions to keep in mind.”


Hester and Deslauriers have been partners in the jumper ring for several years and have collected many top placings. Their plans currently include moving up over the summer into the 1.50m ranks.


“He’s really an incredible partner, and I’m so lucky that I get to ride him,” said Deslauriers. “He’s really the greatest combination of attributes that you would want in a partner. Going into today, I felt very good about our partnership and I knew in the jump-off that I could really push the pace and he would give it his all, and he did.”


Thanks to a generous sponsorship from T & R Development, co-founded by Teddy Vlock and Rob Gray with an aim to provide a higher level and standard of barns for horses and riders in Wellington, FL, The Under 25 division made its debut at Old Salem Farm this year.


“I think the U25 is so important because it’s developing the young riders that are the future of our sport,” said Vlock, “especially for the young professionals trying to compete against each other. It gives you a little more space to develop.”


Earlier in the day on the Grand Prix Field, Mattias Tromp (USA) of North Salem, NY, raced to a victory in the $35,000 Speed Derby of North Salem aboard KM Whatever RV for Beyaert Farm, Inc. McLain Ward (USA) was second with his own Qantor des Etissses, and last week's winner, Penny Brennon (GBR) claimed third with her own Sun Tzu.


“He’s so fast,” said Tromp of KM Whatever RV. “As soon as you push your hands forward, he wants to fill the bridle. He’s electric careful; you can just run at the fences. The horse gives you such a good feeling off the ground because he’s so careful and really attentive to the jumps. It’s cool when you feel your horse looking for the next jump with you.”


While Tromp took home the blue ribbon, he'll be meeting with Ward Saturday night after a wager on the fastest time before faults left him footing the dinner bill.


Old Salem Farm will host the $130,000 Empire State CSI 3* Grand Prix, presented by The Kincade Group, on Sunday at 2 pm to highlight competition on the Grand Prix field, while Grand Pony, Children's, and Junior Hunter Champions will be crowned in the hunter rings. Meanwhile, family activities, including face painting and pony rides by Pied Piper, will begin at 11 am. In addition, the ASPCA will host a pet adoption day at Old Salem Farm from 12:30-4:30 pm.


Stay on top of all things Old Salem Farm this spring with all-day live streaming of the Grand Prix Field Friday through Sunday at www.oldsalemfarm.net.


Major events on the live stream include (times are subject to change):


Old Salem Farm and Old Salem Farm Spring Horse Shows are also on Facebook, as well as on Twitter and Instagram as @oldsalemfarmny. Follow for an exclusive and behind-the-scenes look at the Old Salem Farm experience.


Full horse show results can be found at www.horseshowsonline.com.