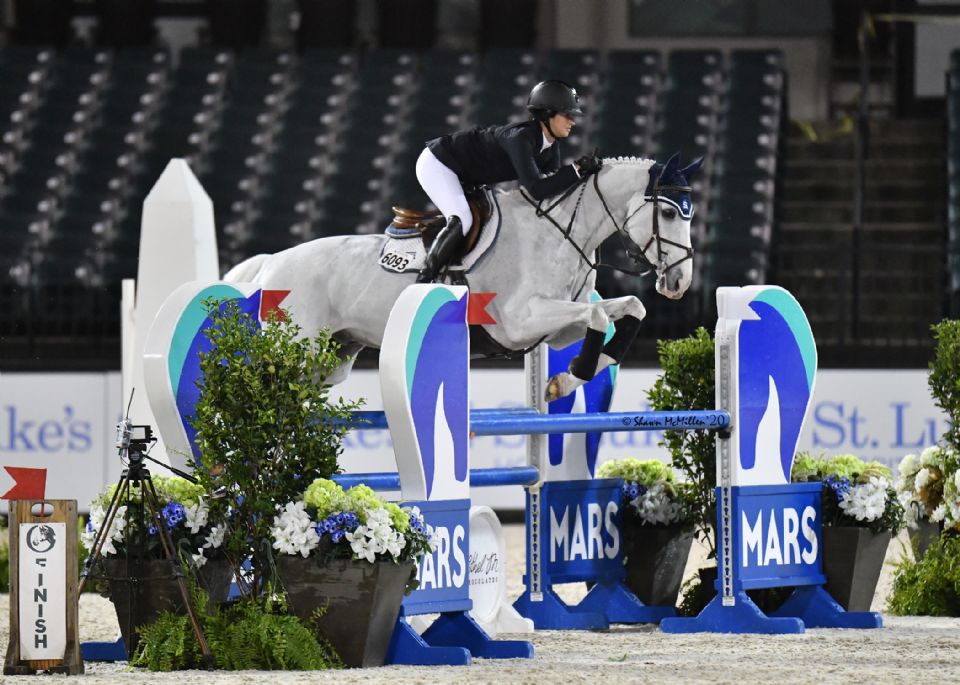 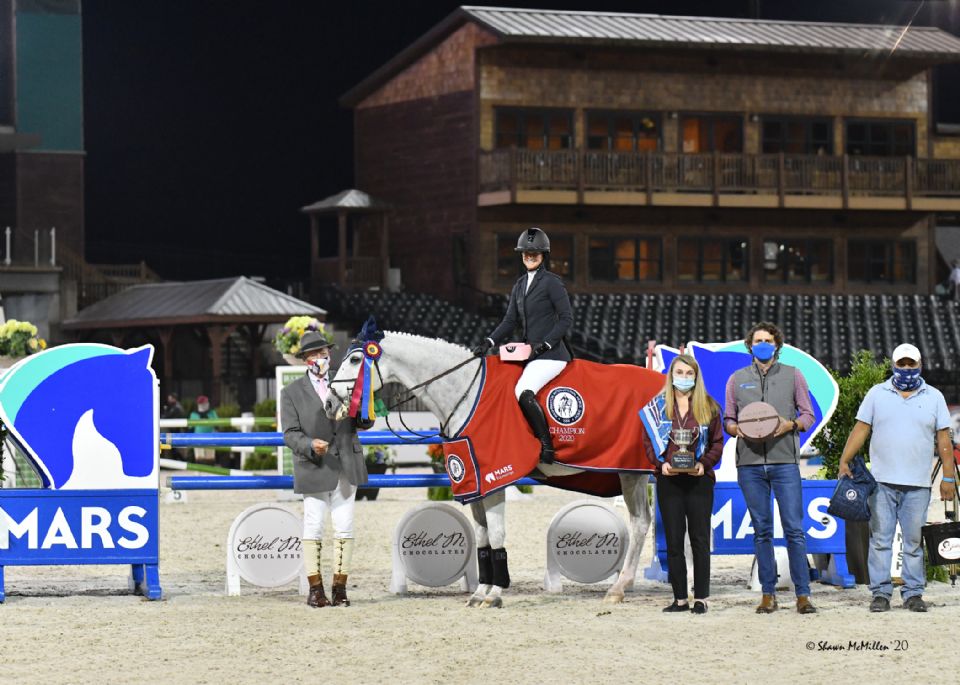 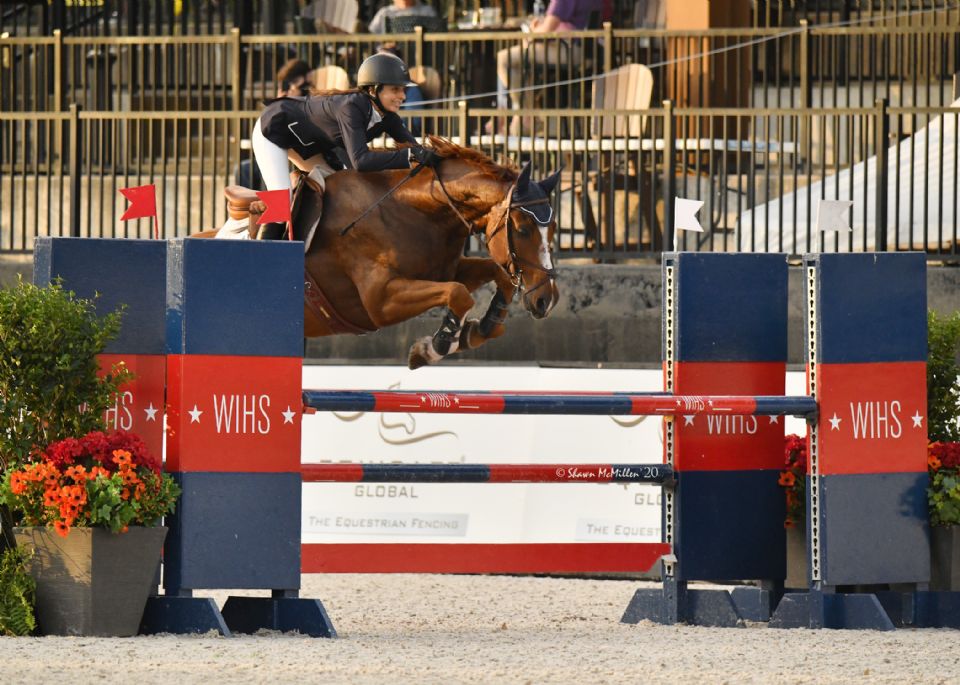 Leigh Nanda and El Casper on their way to a WIHS Children's Jumper Championship.
Photo by Shawn McMillen Photography 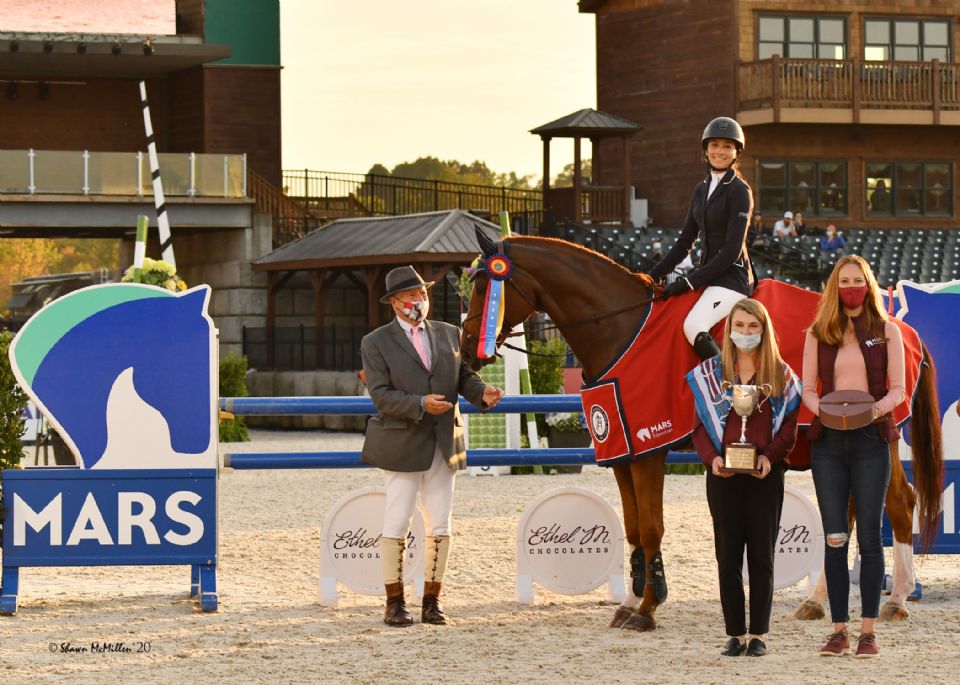 Jumpers took over the spotlight at the Washington International Horse Show (WIHS) presented by MARS Equestrian™ on Thursday, October 22, at Tryon International Equestrian Center (TIEC) for the $10,000 WIHS Adult and $10,000 Children’s Jumper Championships presented by MARS Equestrian™. Adult competitor Lindsey Tomeu of Wellington, FL, and children’s rider Leigh Nanda of Wilmette, IL, both saved the best for last by claiming victory as the final rides in their respective classes.

Under the lights of the Tryon Stadium, Tomeu, 26, celebrated the perfect culmination to a spectacular career with her 19-year-old Belgian Warmblood gelding, Bonapart, by Parco, to win the $10,000 WIHS Adult Jumper Championship, an honor that had alluded them until this year.

“He has won everything there is to win,” said Tomeu of Bonapart, owned by DBHC, Inc., and a member of her string since 2014. “This was the last thing for him; everything is accomplished. He’s my heart horse and I don’t know what I’m going to do without him when he retires.”

Tomeu and Bonapart have competed at WIHS since 2015 and took the qualifying process day by day this year. “This is my favorite horse show every year,” she said. “I don’t show Bonapart as often as I used to because he’s 19 now, but we were focused on being here this year. Being able to show at all this year is very special, and what makes WIHS so special is the atmosphere. They were able to recreate that here and everyone involved did such a great job.”

Returning last in a six-horse jump-off, Tomeu and Bonapart crossed the timers in 33.675 seconds after a foot-perfect inside turn to the final line and all-out gallop to the last fence.

“My weakness with Bonapart is right inside turns, but I was able to set the turn up just right and he was so great to land and run to the last jump,” said Tomeu. “I’ve been in the position to go last a few times. I’ve cracked sometimes and pulled through lots of other times, so I just have to have my mindset right.”

In a jump-off speed battle over a course set by Anthony D'Ambrosio, Molly Athey of Enid, OK, posted a jump-off time of 35.021 seconds on SL Olada to finish second for owner Daneli Miron. Leslie Kopp of Bethany Beach, DE, rounded out the top three riding her own Doman to a fault-free time of 36.74 seconds.

Fifteen-year-old Leigh Nanda of Wilmette, IL, made her debut at WIHS a memorable one by winning the Children’s Jumper Championship aboard her own El Casper. Twelve pairs returned for the jump-off, but Nanda kept them on their toes as the final ride when she stopped the clock at 33.228 seconds to bump runner up Camden Kitchens of Shaker Heights, OH, to second aboard Nemo, owned by Rachel Schreier, in 35.585 seconds.

Rounding out the top three in the children’s ranks was Katherine Pugliese of Malvern, PA, and her own Easy Jumper with a double-clear effort in 36.378 seconds.

Of the road to get to WIHS, Nanda said, “Qualifying this year with coronavirus was an unexpected experience. The virus cut qualifying short for everybody, but I started in May or June so we only had three to four months to qualify. We ended up being ranked number one coming to WIHS, which was really special. I dreamed of being here and it’s really incredible that I was able to come ride amongst all these prestigious riders.”

Nanda started riding El Casper, a 13-year-old Hanoverian gelding by Escudo I, only several months ago, and the duo quickly clicked. Their partnership was evident in their jump-off round, which included top speed and tidy turns.

“Going in last, my only thought was to stick to the plan,” said Nanda, who trains with Lance Williamson. “My trainer always gives me a plan and I try to stick to it. I think that strategy is what won it for us. We did six strides in the first line and a lot did seven. We turned back to the third jump pretty fast, and in the last line from the in-and-out to the vertical, we ran up in nine and I thought I would be long, but he ate it up.”

Nanda’s next goal is to move up to the low junior jumpers with El Casper and qualify for WIHS again in 2021.

The Washington International Horse Show continues at TIEC on Friday, October 23, with the opening hunter phase of the WIHS Equitation Finals.