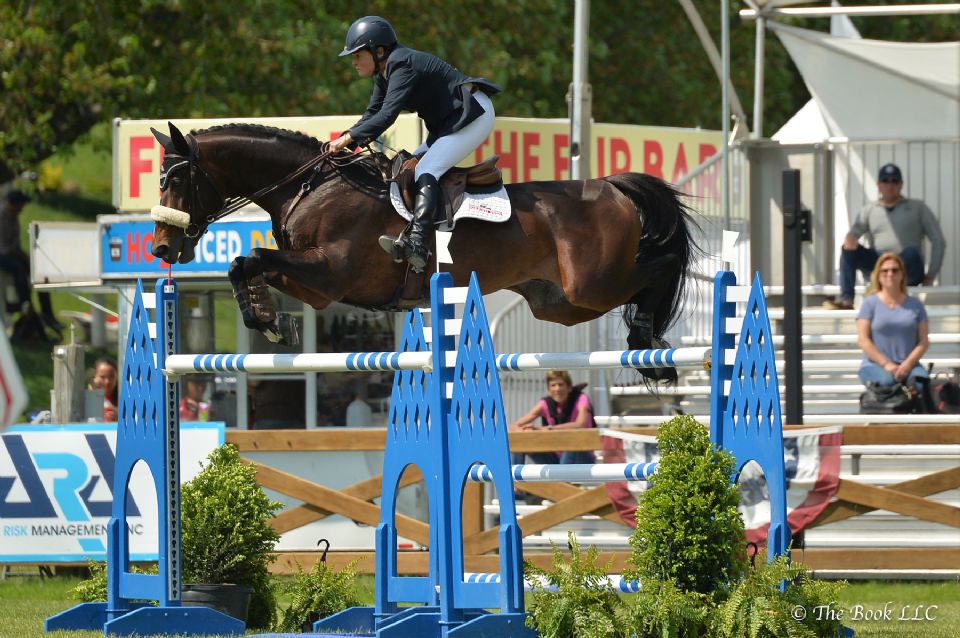 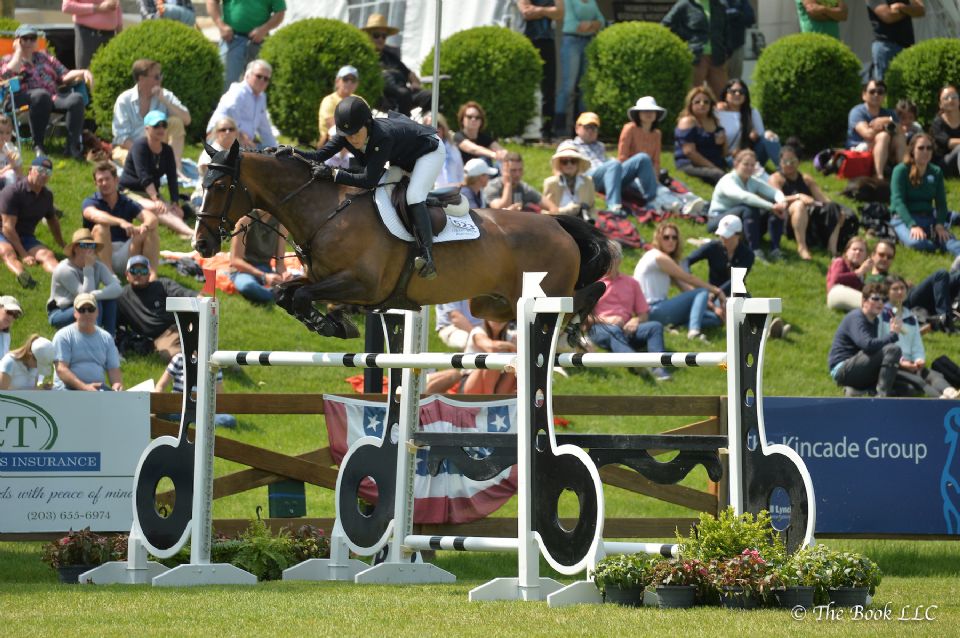 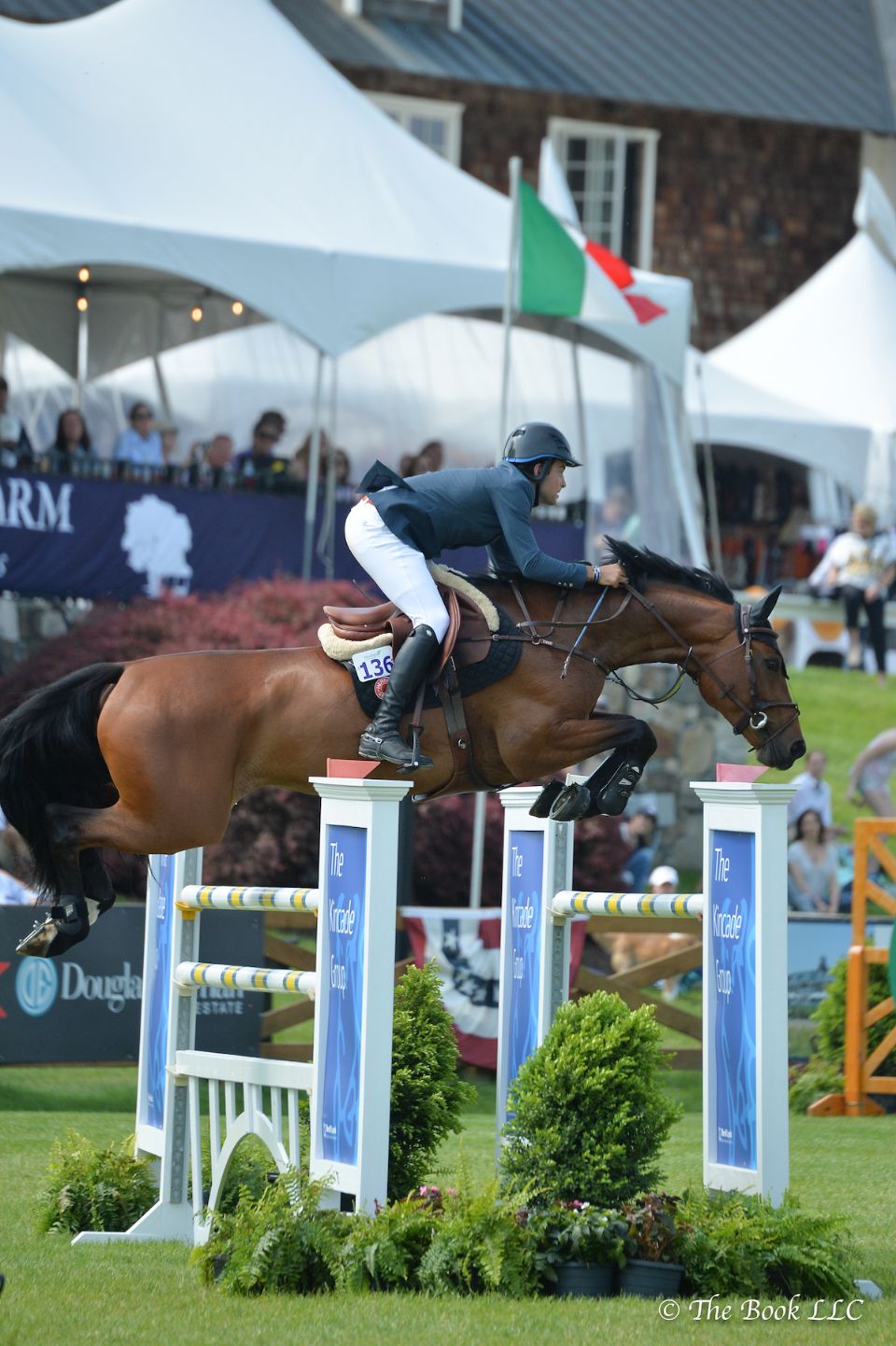 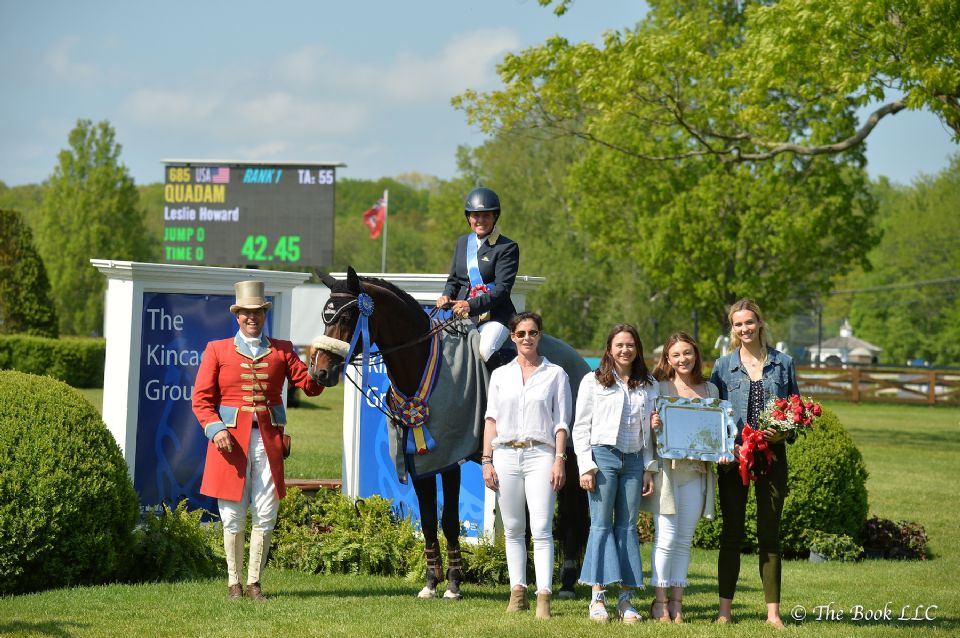 Leslie Howard and Quadam were presented as the winners of the $133,700 Empire State Grand Prix CSI3*, presented by The Kincade Group, on Saturday, May 19, during the 2019 Old Salem Farm Spring Horse Shows at Old Salem Farm in North Salem, NY, by ringmaster Alan Keeley, owner Laure Sudreau, and The Kincade Group representatives Jamie Ziegelheim, Melina Frodella, and Gretchen Kincade.
Photo by The Book 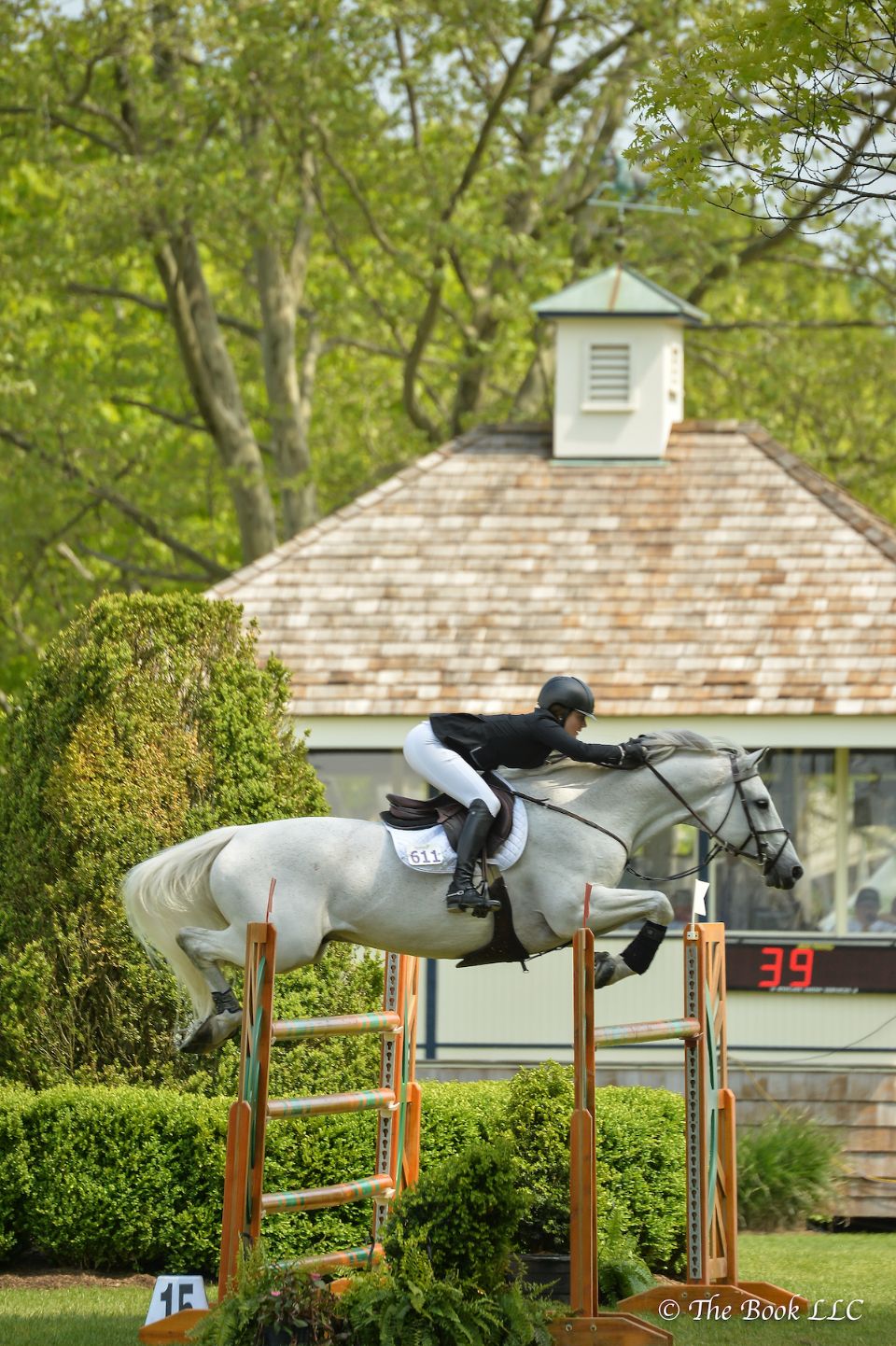 In 1983, Howard rode to her first grand prix victory at Old Salem Farm aboard Albany, the horse that later carried her to win a team gold medal at the 1984 Olympic Games in Los Angeles. On Sunday, she returned to familiar territory and claimed another milestone win on the Old Salem Farm Grand Prix Field. From a starting order that included 30 horses, Howard, 62, was the first of only three to jump clear over a challenging track set by Ken Krome (USA).

Again leading the charge in the jump-off, Howard and Quadam, owned by Laure Sudreau, set the pace with another clear round in 42.45 seconds. The time was more than enough to top runner-up and North Salem, NY, local Katie Dinan (USA), who guided Brego R’N B to a double-clear day in 42.45 seconds.

Howard welcomed Quadam, a 13-year-old Hanoverian stallion (Quite Easy x Stakkato), into her string when she found him for her client Richard Neal in 2014. Two years into that partnership, they decided to sell the mount and Sudreau stepped up to make the purchase as a grand prix ride for Howard.

“He almost won the American Gold Cup here last year with one down in the jump-off, but today’s course suited him because he is very well balanced,” said Howard. “The horses that are a little long in the body and not as active behind had a hard time because there were a lot of tight turns. My horse’s hind end is always underneath him, he turns well, and he’s easy to ride because his stride is so expandable. Jump-offs like today’s are so much easier for him because when you slow down you don’t lose any energy.”

Quadam has only been back in the grand prix ranks for a year after a tragic accident sidelined the stallion a short time into its partnership with Howard.

“He got loose in Florida and fell down on blacktop and severed his patella ligament,” said Howard. “He was out of the sport for two years and they said that horses can come back from that injury, but it was pretty major. He was sound very quickly, but he didn’t have any strength.”

It wasn’t until the summer season in Spruce Meadows last year that Howard felt she had her horse back, saying, “He was schooling low jumps and then all of a sudden he started to gain strength and desire. He wanted to do it again and you could feel it. By the time we got to Bromont last year he was back.”

Howard hails just a half hour down the road from Old Salem Farm in Newtown, CT, and grew up riding at Old Salem Farm. “It’s like home for me and this is a very knowledgeable crowd here because this is horse country!” she said.

While Howard sat atop a longtime partner, Dinan only started riding Brego R’N B in March. After spending some time in the national ranks, Dinan stepped the 13-year-old gelding (Namelus R x Gerlinus) owned by Grant Road Partners, LLC, up to FEI competition for the first time at Old Salem Farm.


“He could not have gone better,” she said. “It was a great day to have a big debut with a perfect setting and perfect weather. I feel really comfortable here because I have a lot of experience on this field.

“Our farm is a seven-minute drive up the road,” continued Dinan, 25, who started competing in the walk-trot division at Old Salem Farm. “One of the best parts about this show is that it has a real local and loyal following. The same people come every year, and they really know the riders and horses. It’s a really wonderful feeling when you know people are rooting for you and you can deliver for them.”

Rounding out the top placings, Israel’s Daniel Bluman rode Colestina H to third with one rail down and a time of 43.65 seconds in the jump-off for owner Blue Star Investments and Kim Douglas. Lucy Deslauriers (USA) piloted Hester, owned by Lisa Deslauriers, to fourth with the fastest four-fault round over the original course in 73.60 seconds. In fifth, McLain Ward, who hails from Brewster, NY, rode Noche de Ronda, a horse the U.S. Olympic team gold medalist owns with Bob Russell and Marilla van Beuren. They crossed the timers of the first-round track with four faults in 74.36 seconds