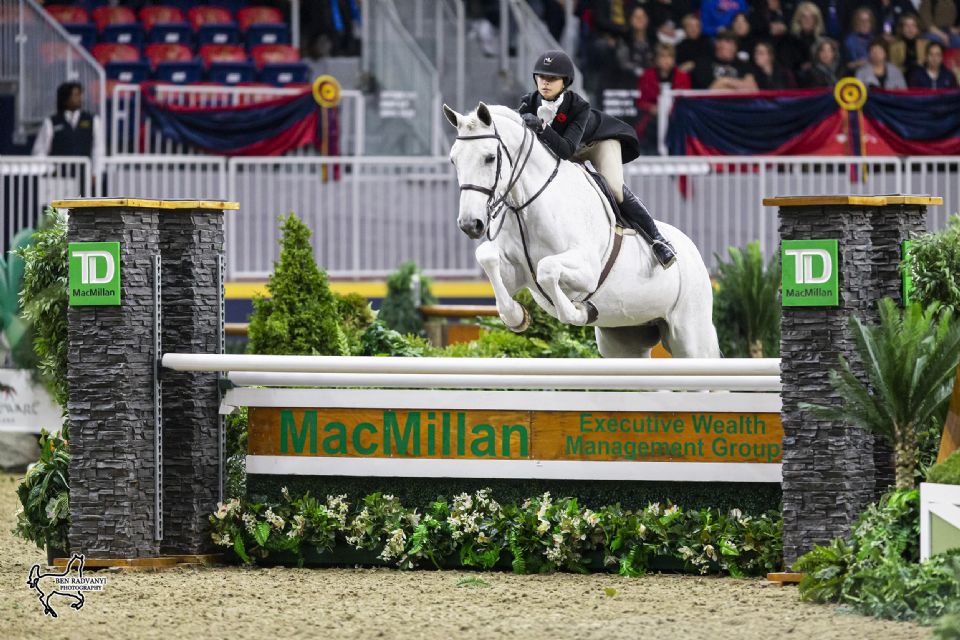 Leanna Lazzari of Mississauga, ON, and UFO de Nisi won the $25,000 Knightwood Hunter Derby on Tuesday, November 5, at the Royal Horse Show in Toronto, ON.
Photo by Ben Radvanyi Photography 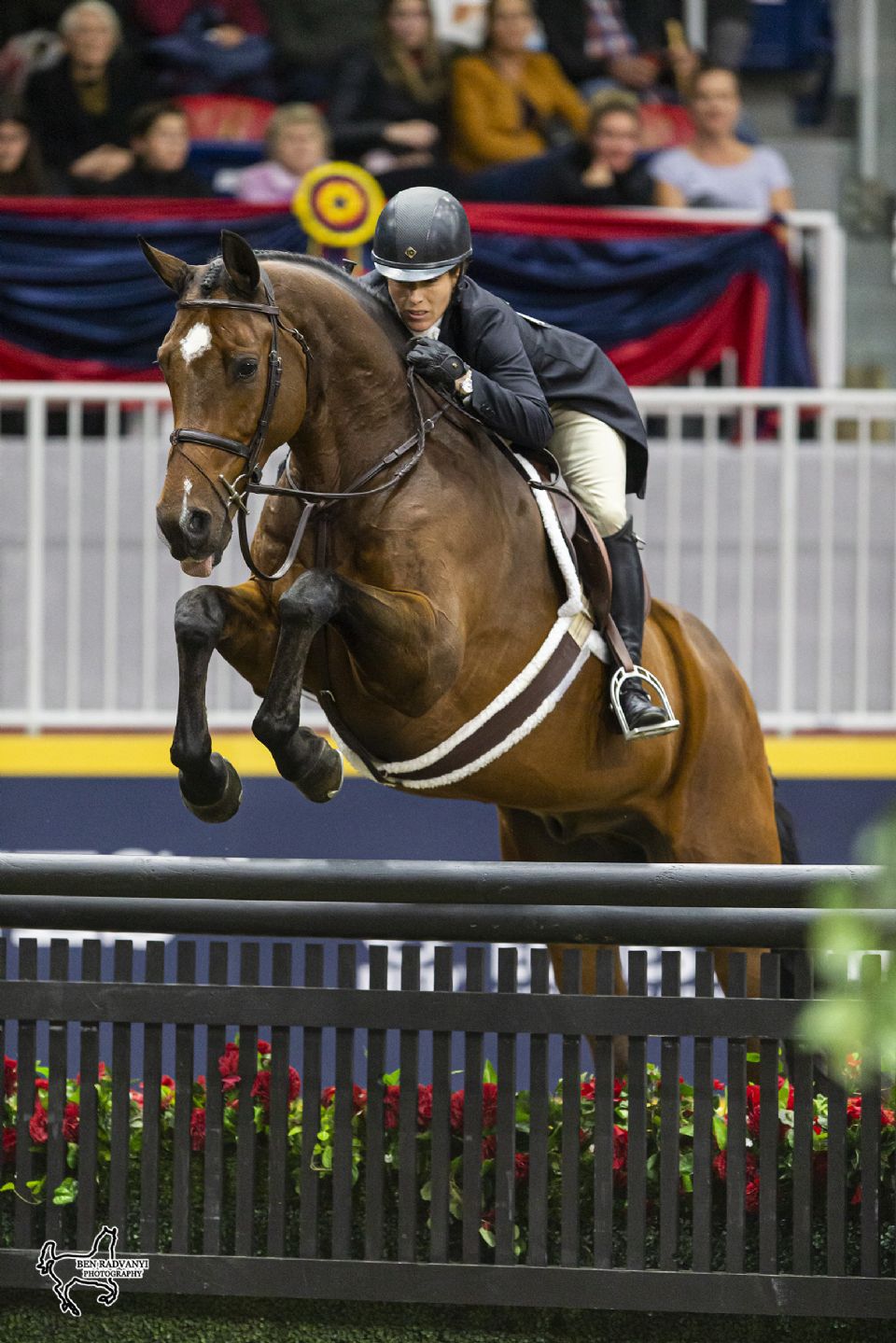 Isabelle Lapierre and Lamaze OBF were named the overall 2019 Canadian Hunter Derby Champions after finishing second in both the $25,000 Knightwood Hunter Derby and the $15,000 Braeburn Farms Hunter Derby.
Photo by Ben Radvanyi Photography 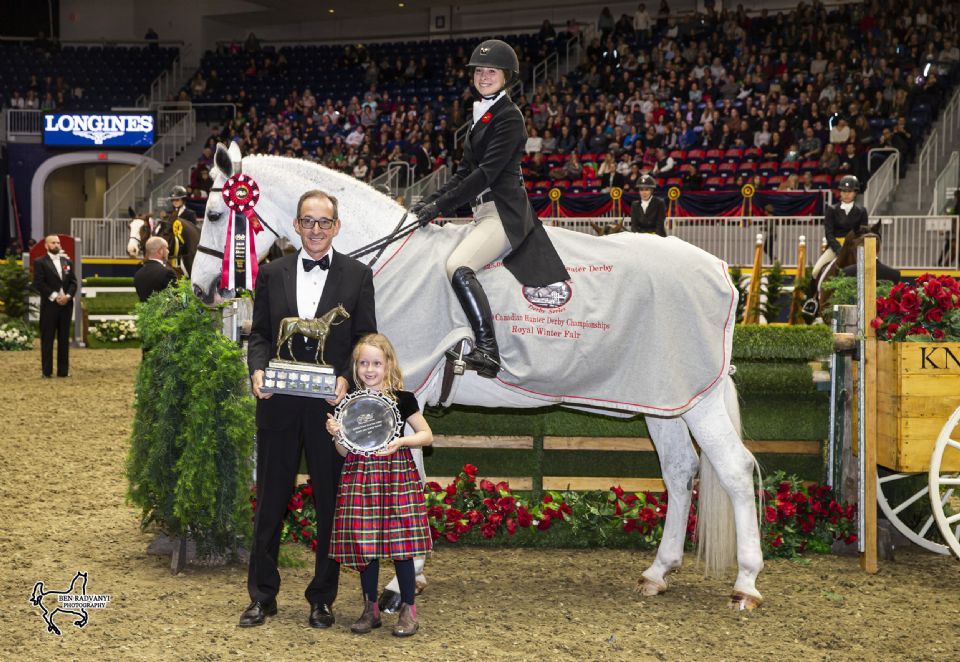 Leanna Lazzari and UFO de Nisi were presented as the winners of the $25,000 Knightwood Hunter Derby by Jeff Brandmaier and his daughter, Liza Jean.
Photo by Ben Radvanyi Photography 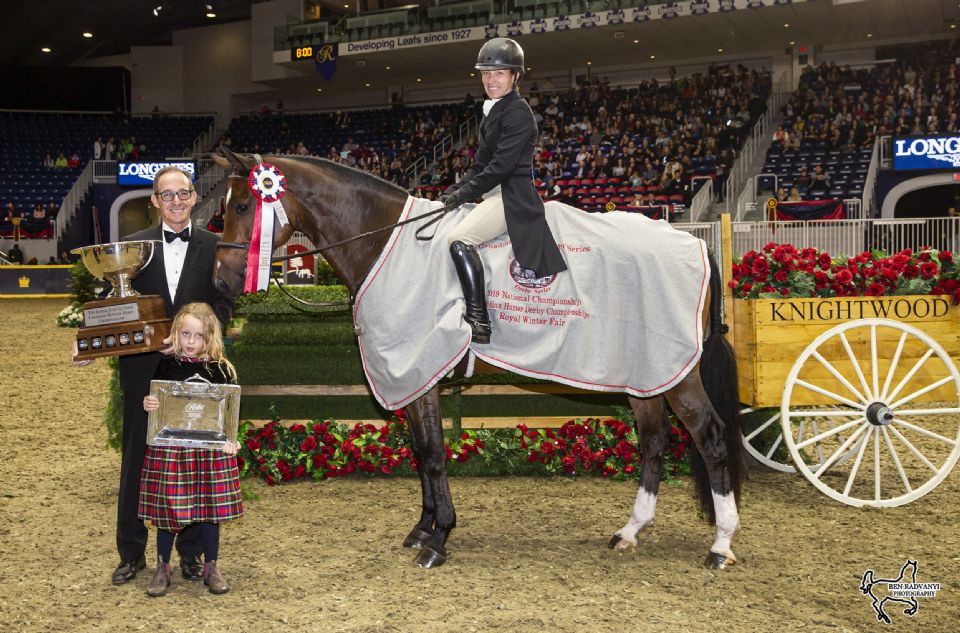 
Junior competitor Leanna Lazzari, 18, of Mississauga, ON, claimed victory in the $25,000 Knightwood Hunter Derby on Tuesday evening, November 5, during the Royal Horse Show, held as a part of the 97th annual Royal Agricultural Winter Fair in Toronto, ON.

Lazzari and UFO de Nisi, her 11-year-old Selle Français gelding, were the 16th of 21 entries to compete over the Meaghan Rawlins-designed course set in the Coca-Cola Coliseum. The pair took over the lead with an overall score of 101, including a base score of 84 coupled with seven handy bonus points and 10 high option bonus points.

“To win against a lot of professionals and some of the best hunter riders in the country feels pretty amazing!” said Lazzari, a regular competitor in the equitation divisions who decided to also try competing in the Canadian Hunter Derby Series this year with UFO de Nisi.

“I thought we would do a derby one week for fun, and then we kept doing them because we had so much fun!” said Lazzari, who trains with Lois and Peter Mulligan and their daughter, Francesca, at Stoney Fields in Schomberg, ON. “He really excels at them. Doing the derbies has been a great experience for both of us. He’s so brave, so that’s a class that he can really excel in.

“It’s taught us a lot of things, and it helps us a lot in the equitation ring as well,” continued Lazzari.

Following her win in Tuesday evening’s $25,000 Knightwood Hunter Derby, Lazzari was presented with the Paddy Ann Burns Trophy in honour of her victory and was also recognized as the highest-scoring junior or amateur rider.

Coming just shy of catching Lazzari and UFO de Nisi was Isabelle Lapierre of Levis, QC, who earned an overall score of 100.5 to take second aboard Lamaze OBF, owned by Margot Clarke-Smith and named after Canadian Olympic champion, Eric Lamaze.

“This year has been up and down because I won 11 derbies in a row, but then my top horse had colic surgery a month and a half ago, so he wasn’t able to come here,” said Lapierre, referencing Carrera S, the horse she won the $25,000 Knightwood Hunter Derby with last year. “This horse, Lamaze OBF, is very green. He has never shown here before, so we came here with no expectations, and he was very good!”

Having also finished second in the $15,000 Braeburn Farms Hunter Derby held on Sunday, November 3, Lapierre and Lamaze OBF were named the overall 2019 Canadian Hunter Derby Champions and were presented with the Lorna Jean Guthrie Challenge Trophy.

“To be the overall champion is really amazing,” said Lapierre who began riding the eight-year-old Bavarian Warmblood gelding in August. “He’s new to this, but he’s a very good derby horse I think!”

More than 1,000 horses from around the globe are competing for $980,000 in prize money during the 10-day CSI4*-W Royal Horse Show. VIP Platinum and Gold seating, as well as group and individual tickets, can be purchased here. All Royal Horse Show tickets include general admission to The Royal Agricultural Winter Fair.