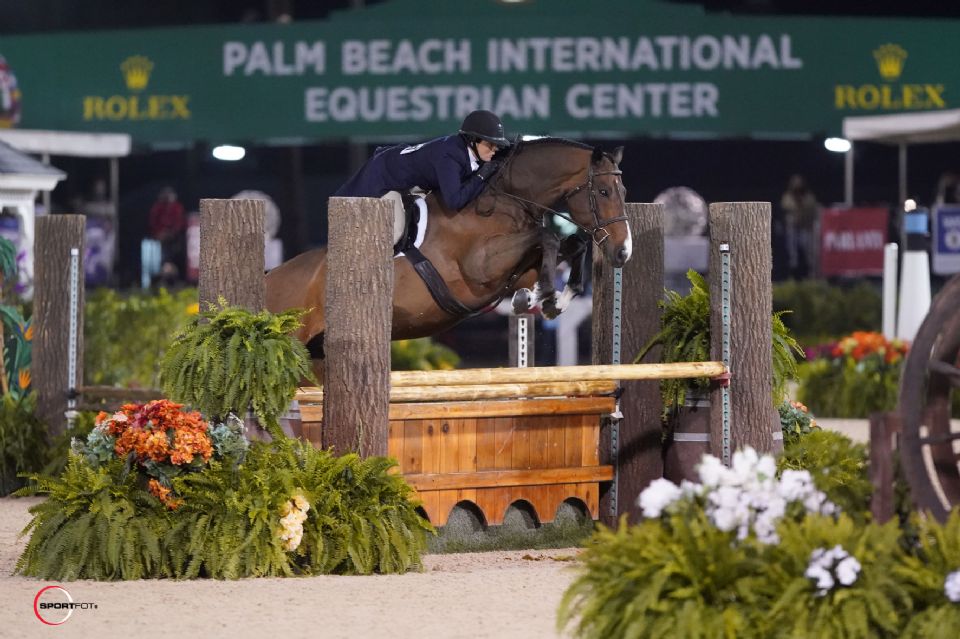 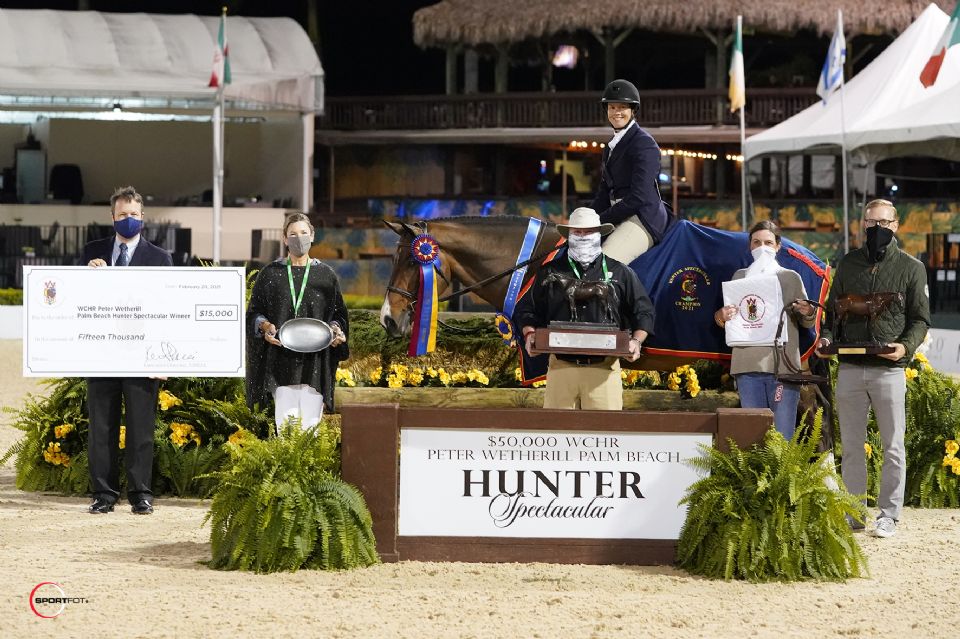 Amanda Steege and Lafitte de Muze were honored for their win.
Photo by Sportfot

By Jump Media for USHJA

Second place with a two-round total of 177.66 went to Liza Towell Boyd and Walk-Off, owned by Gigi Manigault. Boyd came into round two in 10th place on a first round score of 86.66, but her high score of 91 in the second round shot her into the lead, to be beaten by only Steege later in the class. Following Boyd in third was Geoffrey Hesslink and Bond, owned by Shadowfax Equestrian, LLC, on a total score of 176.49, putting the top three finishers all within just two points of one another.

“It’s a huge honor for him to have this class on his resume, and it’s certainly a class that is very important to me and very important to his owner,” Steege said of her mount’s victory. “Every year when we sit down and make his schedule, we plan his Florida season around making this be the big event for him to try to get to and try to win. There are months of work that go into winning this class, not just what happens this week.”

Steege, who has shown Laffite de Muze four years in a row in this class, planned to ride a smooth first round, knowing he would rise to the occasion and jump with amazing style. She made a solid plan for the second round, then went a completely different direction after watching the rounds before her.

“Liza [Boyd] and I walked together, and we were not planning on doing some of the inside slices we did,” said Steege of her plan for round two. “As we were watching people go and do the turns, the judges seemed to reward it, so I actually phoned a friend. I called Tom Wright, who was sitting in the stands, literally when I was standing at the in-gate and I asked him what he thought I should do. He helped me formulate a plan that we thought would be the best for Lafitte, and I was happy I was able to follow the plan and make it work.”

Boyd ascribed feelings of admiration of Lafitte de Muze for her mount Walk-Off, the seven-year-old gelding that recently made its hunter debut and took home reserve champion in the 3’6” Green Hunters during WCHR week to qualify for the WCHR Peter Wetherill Palm Beach Hunter Spectacular. “My horse is honored to be second to Lafitte,” Boyd said. “I think he just idolizes the horse.

“[Walk-Off] is quite green,” continued Boyd. “Actually, when we went to jog today, I realized he’s a ‘COVID baby’ – he doesn’t know how to jog! With him being green, in the first round I rode a little bit cautious, and the second round when I was in 10th place, I thought I’d just go for it. He really stepped up to the plate and did all the inside turns. He proved to me that he’s going to be a real derby horse in the making.”

Rounding out the top three was Geoffrey Hesslink, who secured multiple championships during WCHR week and piloted two entries in the WCHR Peter Wetherill Palm Beach Hunter Spectacular. “Bond was lovely,” Hesslink said of the Shadowfax Equestrian, LLC, entry. “He does the Junior Hunters with Isha [Swani], and I’m lucky to get to do him in some of these big events. He’s actually done this class twice with Isha so I knew he would be more than ready to go. He’s always game for anything so my job was easy.”

In between Rounds 1 and 2, Avatar Z, owned by Ben Lyles and Isabella Watson and ridden by Victoria Colvin, received the Charlie Weaver Memorial Award for the highest-scoring Conformation Hunter in Round 1 with a score of 88.5. The Mark Gregory Award, established by Susie Humes, for the best-conditioned horse in Round 1 was presented to Charlemagne, owned by Dr. Betsee Parker and ridden by Scott Stewart. Avatar Z was also the recipient of the Shapley's Best Turned Out Award, presented by Sally Stith-Burdette to groom Katie Wozniak.

The WCHR Kiara Barnett Rider Style Award, donated by Davlyn and Meralex Farms, was awarded to Laena Romond. On hand to present the award was Bryan Baldwin and Tammy Williams. Created in honor of Charleston, South Carolina, equestrian and restaurateur Kiara Barnett, the style award is presented to the rider in this class who displays the American style of riding and exemplary sportsmanship outside the ring.

Riders earning champion or reserve champion in the 3'6" and higher rated WCHR hunter sections qualified for the $50,000 WCHR Peter Wetherill Palm Beach Hunter Spectacular, with additional riders qualifying based on points if the qualified riders chose not to compete or were pre-qualified. In addition, riders also qualified based on their 2020 standings in the WCHR national awards programs.

The class, a two-round hunter classic, was scored by three panels of two judges, including Chris Wynne and Mary Lisa Leffler; Rachel Kennedy and Sissy Wickes; and Mark Jungherr and Tom Brennan. The 12 top-scoring horse-and-rider combinations returned for a second round. Earning the highest combined score, Steege and Lafitte de Muze were crowned winners of the WCHR Peter Wetherill Palm Beach Hunter Spectacular and took home $15,000 in prize money, the Dark Continent Perpetual Trophy courtesy of Jim Greene, and a custom WCHR jacket and a cooler. Steege, as the winning rider, also received the Let's Dance Perpetual Trophy donated by Gene R. Mische. Lafitte de Muze’s earnings from this class, as with all the money he wins in competition, will be donated to the Equus Foundation.

Libertas Farm LLC's Chablis, ridden by Kelly Tropin, was named the 2020 USHJA WCHR Hunter of the Year and was presented with the WCHR Peter Wetherill Cup on Saturday night. Caroline "Carl" Weeden was awarded the Kavar Kerr Perpetual Trophy for her philanthropic efforts and dedication to the WCHR Program.

In lieu of the Spectacular Hunt Gala this year due to the ongoing COVID-19 pandemic, a Score 90 Fundraiser for the WCHR program is being held throughout the week for every round that earns a score of 90 or above in WCHR sections.

For more photos from the class, visit the USHJA Facebook page at facebook.com/USHJA.