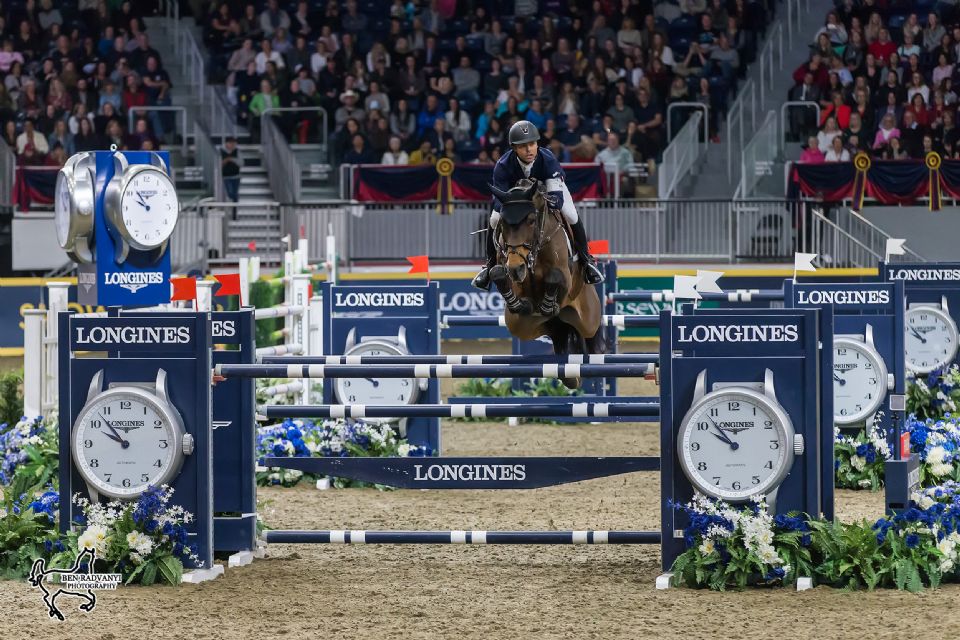 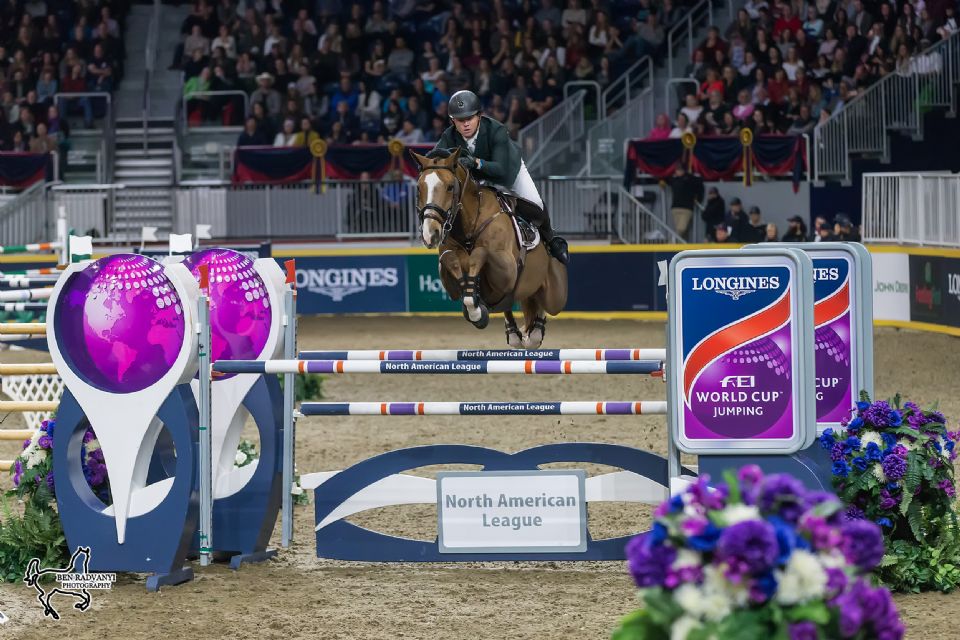 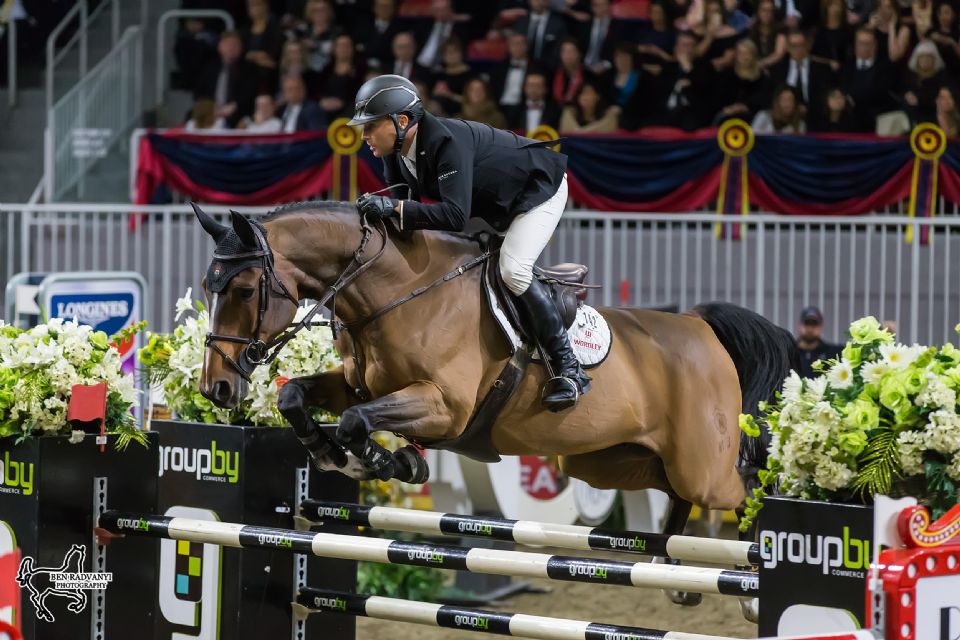 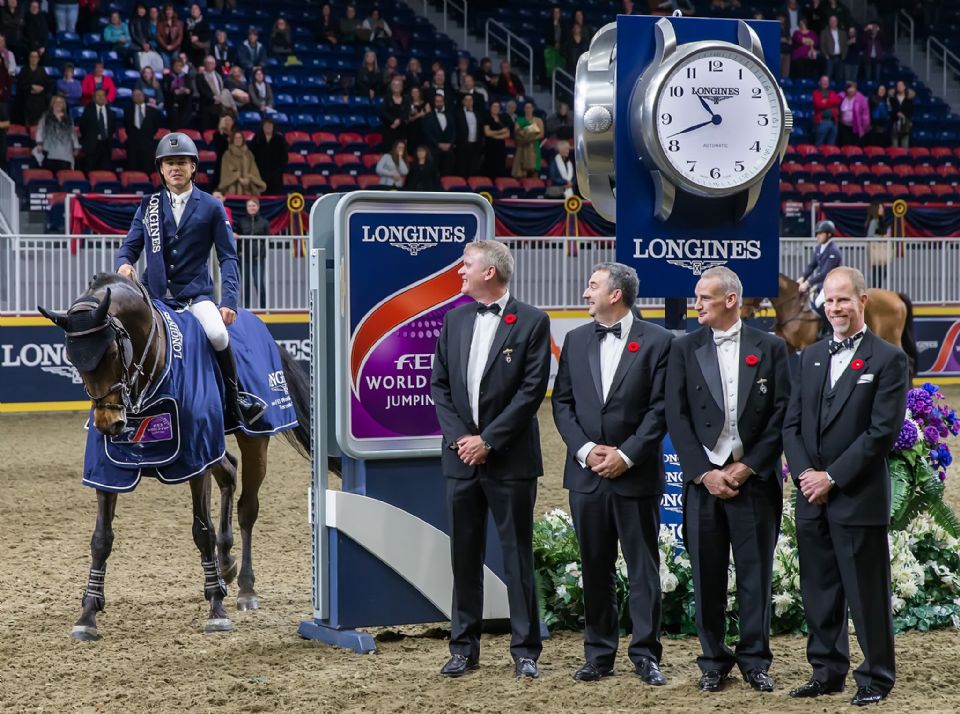 Kent Farrington of the United States aboard Voyeur is presented as the winner of the $150,000 Longines FEI World Cup™ Jumping Toronto by, from left to right, Andrew McKee, President and Chairman of the Board of The Royal Agricultural Winter Fair; Charlie Johnstone, CEO of The Royal Agricultural Winter Fair; Iain Gilmour, Chairman of the Royal Horse Show; and Mark Samuel, FEI Bureau Member and Chair of Regional Group IV, on Wednesday, November 8, at the CSI4*-W Royal Horse Show in Toronto, ON.
Photo by Ben Radvanyi Photography

Kent Farrington of the United States won the $150,000 Longines FEI World Cup™ Jumping Toronto on Wednesday night, November 8, at the CSI4*-W Royal Horse Show, held as part of the 95th Royal Agricultural Winter Fair running through November 13 in Toronto, ON.

Having finished runner-up in last year’s Longines FEI World Cup™ Jumping Toronto, Farrington returned to The Royal with victory set firmly in his sights.  Six riders guided their mounts home clear over the track set by 2016 Rio Olympic course designer Guilherme Jorge of Brazil to advance to the jump-off, but none were faster than Farrington and his Olympic team silver medal partner, Voyeur.  Number one in the Longines World Rider Rankings for a reason, Farrington stopped the jump-off timers in 35.51 seconds to claim the win over Ireland’s Shane Sweetnam, who had the final say as the last rider on course, but a slower time of 36.84 seconds left him in second with Main Road, owned by Seabrook, LLC and Sweet Oak Farm.

“Voyeur is spectacular and has been a career horse for me,” said Farrington of the 15-year-old Dutch Warmblood gelding (Tolano van’t Riethof x Goodwill) owned by Amalaya Investments.  “I owe a special thank you to the Nusz family.  They have been a long-time supporter of my career and bought Voyeur for me with the hopes that he would be a championship horse.  He has been every bit of it and more.  He took me to my first Olympic Games where we got a team silver medal, was in the jump-off for individual gold, and has won a million grand prix events in between.  Tonight, he really showed why he’s special.

“When I compete at The Royal, it feels like going back in time,” continued Farrington of competing in the 95th edition of the event.  “You’re coming into a packed stadium and everyone is wearing tuxedos.  It reminds me of something that you would see in a movie.  It has always been one of my favourite shows.”

Sweetnam settled for second, noting, “Kent’s horse is very experienced, and I knew he was very quick.  I thought, if I am good enough to catch him, then it’s good enough, and if it’s not then I’m happy enough.  This show is packed to the rafters, and has such excitement with a massive atmosphere.  Anytime I’ve had good enough horses, I try to come here to compete because it does have that extra special feel.

“We need this league and we need the standard to be like Toronto with the crowds and excitement,” continued Sweetnam, 36, who has been based in the United States for the last 15 years, of the Longines FEI World CupTM North American League.  “It is buzzing all the time and the spectators really know what they’re looking at.  That’s the way show jumping should be!”

Three different nations were represented in the top three with Sharn Wordley of New Zealand taking third in front of a packed house in the Ricoh Coliseum in downtown Toronto.  He finished fault-free in a time of 43.48 seconds riding Barnetta, owned by Sky Group.

“My horse has a pace that he likes and in that pace, he is capable of jumping nearly any grand prix clear,” said Wordley, 43, who represented his native New Zealand at the 2008 Beijing Olympics.  “My strategy generally is just to try to go double clear and get the best prize that we can.  You have to earn your way into The Royal, and it took me ten years to get here.  This is my third time competing here and so far, my best memory.”

Four-time U.S. Olympian Beezie Madden claimed fourth in the Longines FEI World Cup™ Jumping Toronto riding Breitling LS, owned by Abigail Wexner.  With four faults in the jump-off, her time of 35.78 seconds put her ahead of ten-time Canadian Olympian Ian Millar of Perth, ON, who rounded out the top five with Dixson after the pair incurred four faults in a time of 40.53.  The first rider on course, Ireland’s Conor Swail, took sixth riding GK Coco Chanel for owner Vanessa Mannix.

For his victory, Farrington was awarded the Hickstead Trophy in memory of Eric Lamaze`s legendary 2008 Olympic gold medal partner, and a Longines timepiece.  The official watch of the Royal Horse Show is the lady model of the Longines Equestrian Collection, inspired by the rectangular buckle on the show bridle of the only Swiss horse breed, the Franches-Montagnes.

Of the evening’s courses, Farrington noted, “I thought that there would probably be five clear.  I thought it was a great balance of technicality and size for the competition.”

Course designer Jorge felt his track played out exactly how he had planned, saying, “I knew I had a very solid group tonight, and I am very happy with the overall result and the outcome.  My first show here was 16 years ago in 2001 and it is a very special, traditional show.  I have been lucky enough to design some shows with history, and it’s an honour to design a show that is in its 95th year.”

This year’s event marked the third consecutive year that the Royal Horse Show hosted the $150,000 Longines FEI World Cup™ Jumping Toronto, offering valuable points towards qualifying for the 2018 Longines FEI World Cup™ Jumping Final in Paris, France, next April.  The Royal Horse Show is confirmed to host the event for both the 2018 and 2019 seasons as the sole indoor qualifier in Canada.

“When you look at an event that’s been around for 95 years, it’s all about being world-class and putting on the best show that we can,” said Charlie Johnstone, CEO of The Royal Agricultural Winter Fair.  “Looking at the field that we had this evening, the crowd that we had in the Ricoh Coliseum, and being partners with Longines and the FEI, the momentum is really positive.  As we build our event, and we’re heading into our 100th anniversary, I think there’s bright future ahead for what we’re producing here.  We’re proud to be part of it.”

International show jumping continues this week at the Royal Horse Show, culminating in the $87,000 GroupBy Big Ben Challenge on Saturday night, November 11, where Farrington will defend his title.