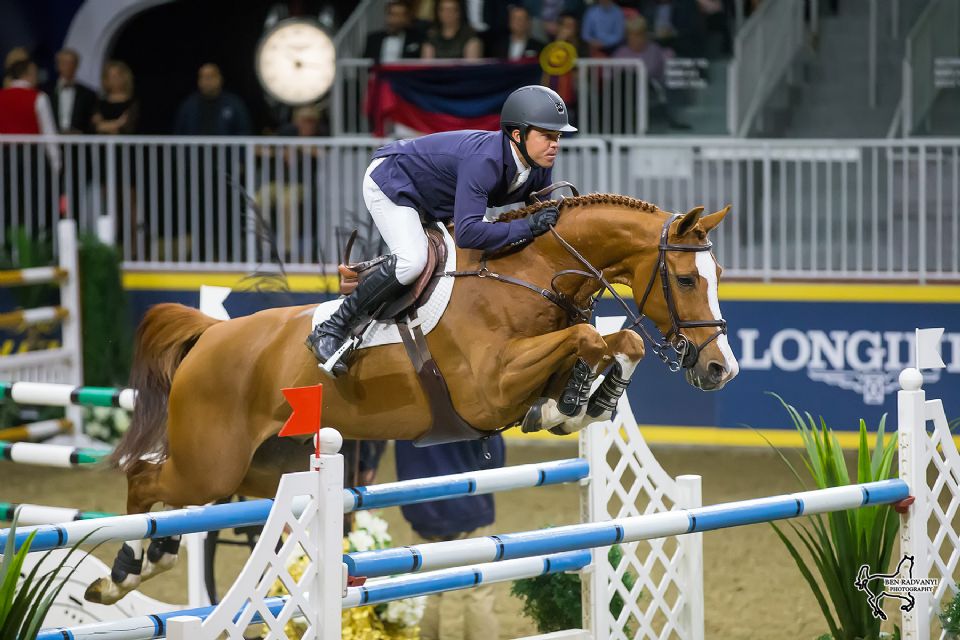 Kent Farrington of the United States won the $75,000 GroupBy ‘Big Ben’ Challenge riding Creedance to close out the CSI4*-W Royal Horse Show on Saturday, November 12, in Toronto, ON.
Photo by Ben Radvanyi Photography 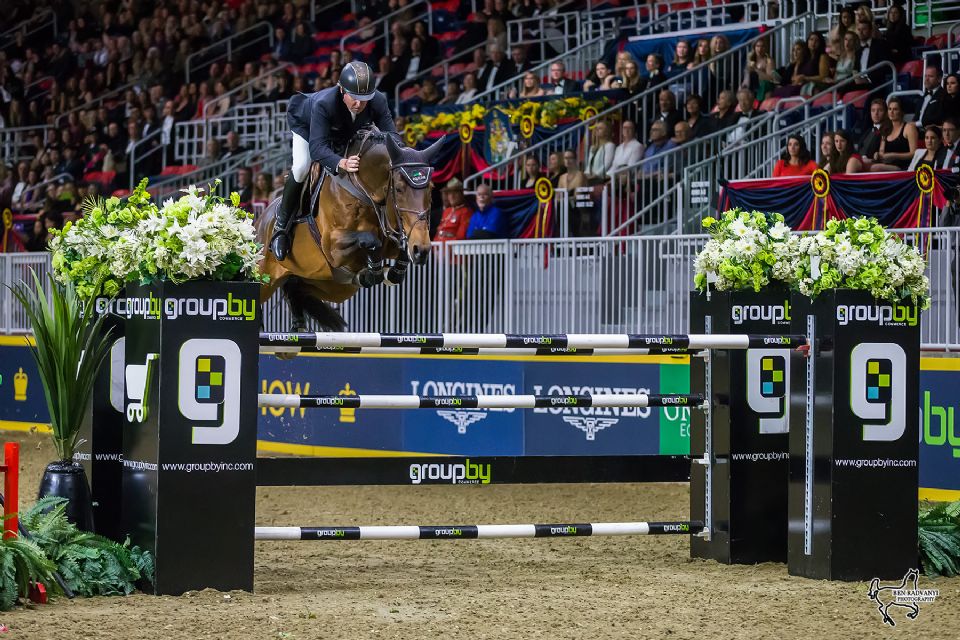 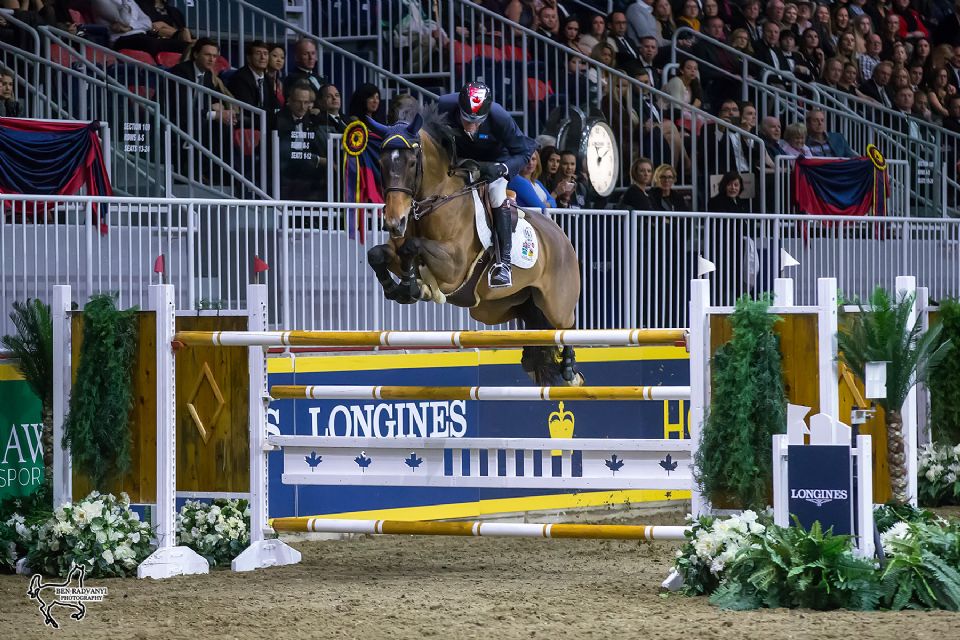 Ten-time Olympian Ian Millar of Perth, ON, placed third in the $75,000 GroupBy ‘Big Ben’ Challenge, named for his legendary mount. Millar was presented with the Lt. Col. Stuart C. Bate Memorial Trophy as the Leading Canadian Rider at the CSI4*-W Royal Horse Show in Toronto, ON.
Photo by Ben Radvanyi Photography 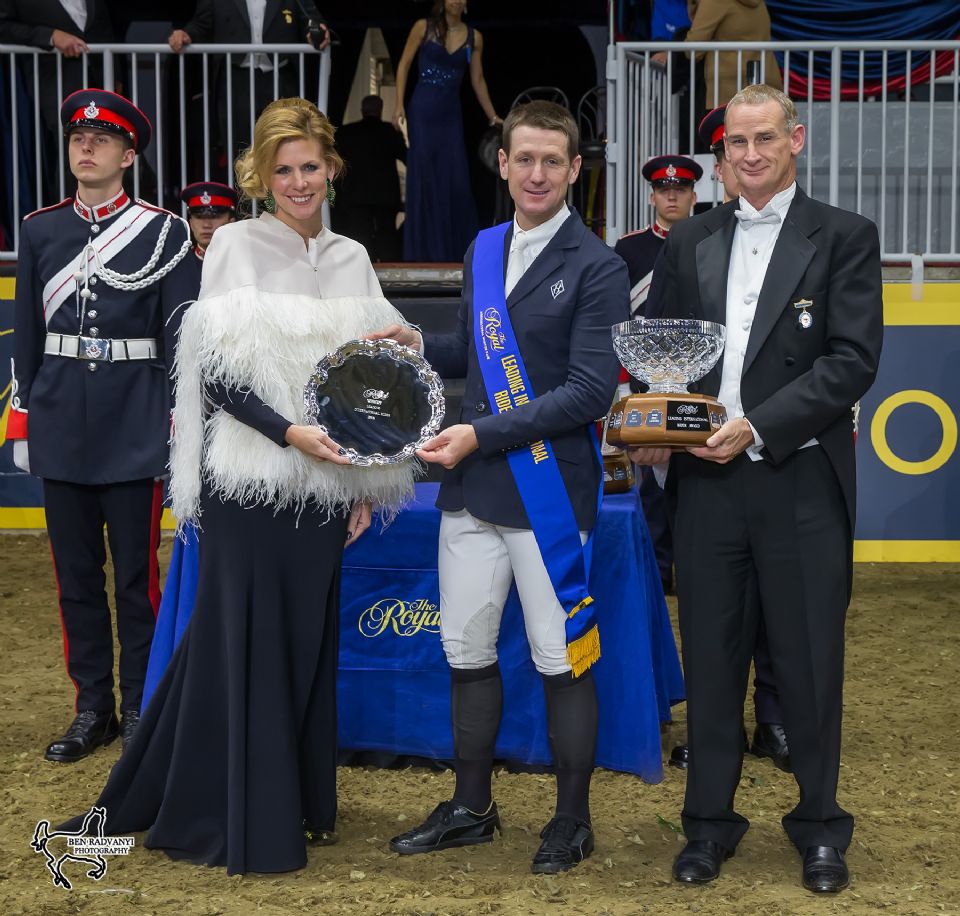 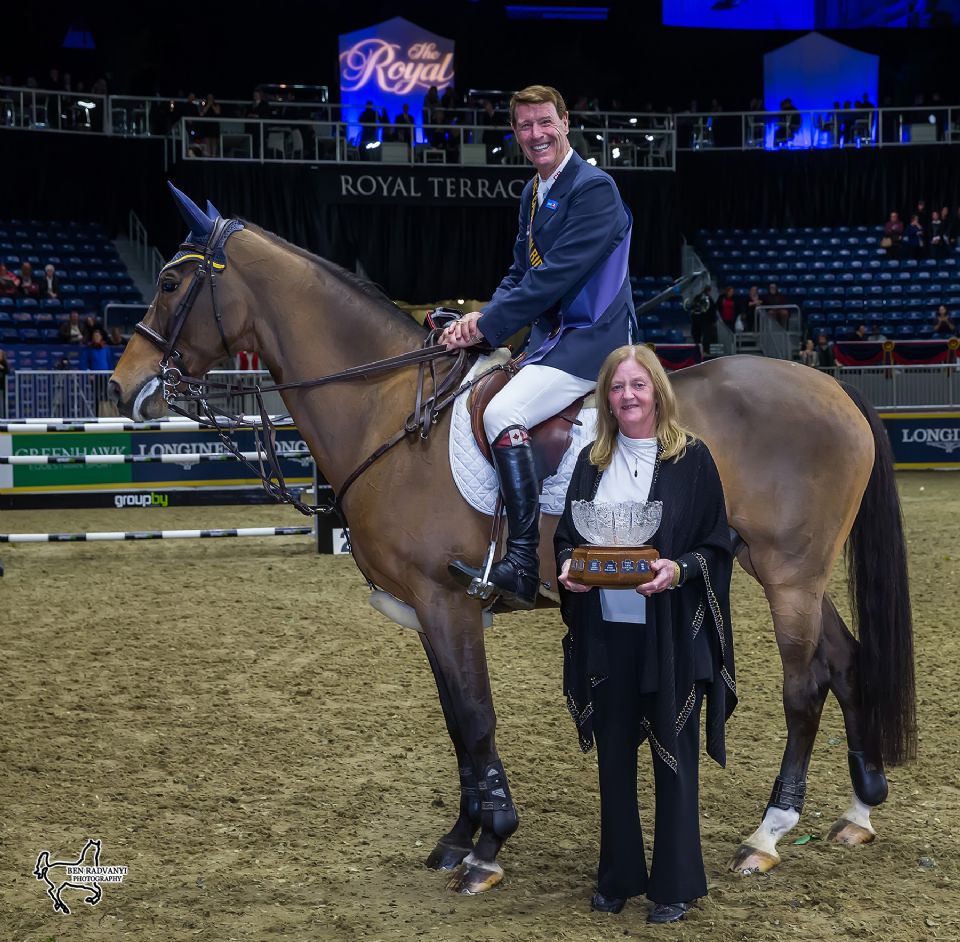 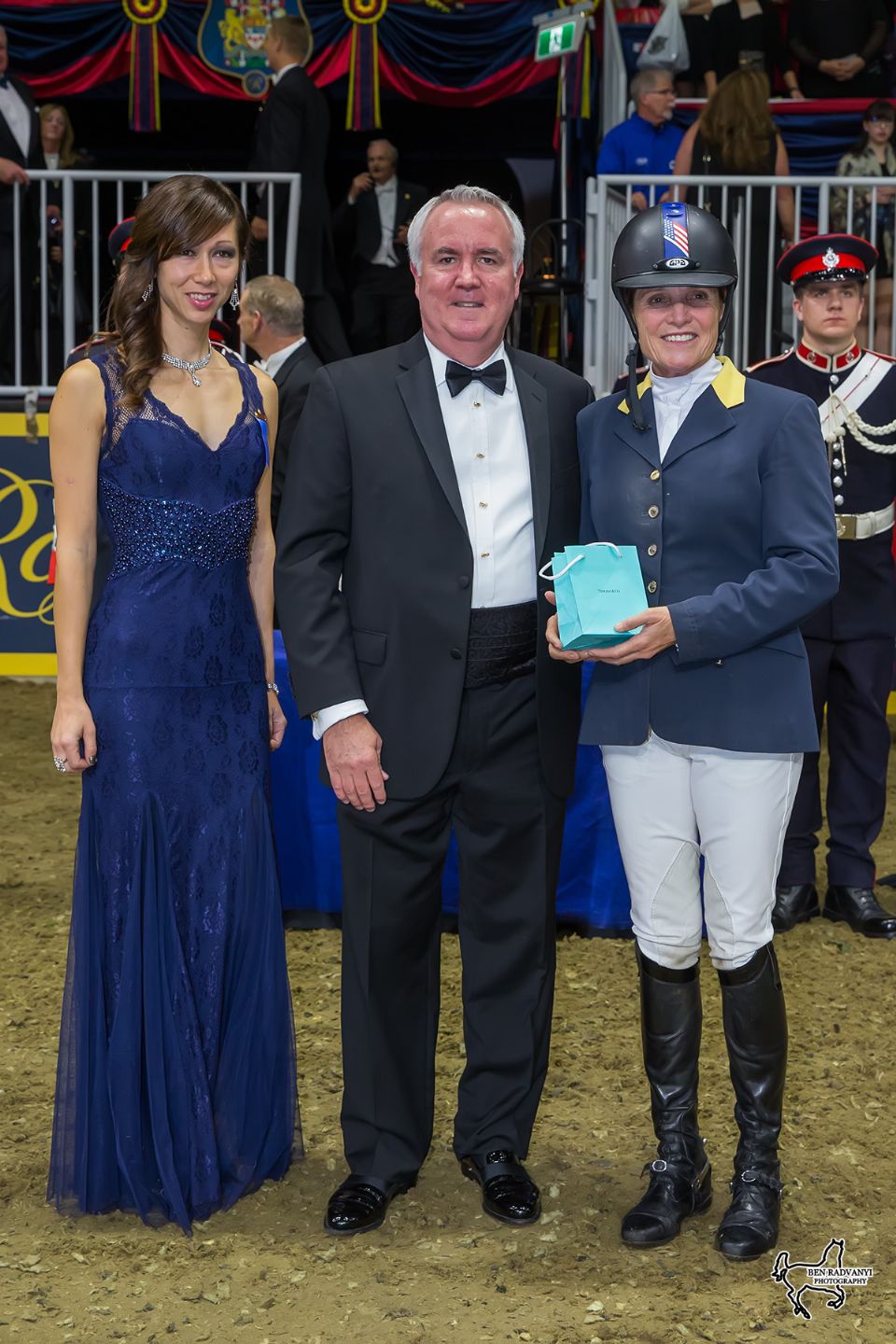 Leslie Howard of the United States was presented with a Tiffany horseshoe pendant as winner of the newly-introduced Tiffany & Co. Leading Lady Rider Award.
Photo by Ben Radvanyi Photography 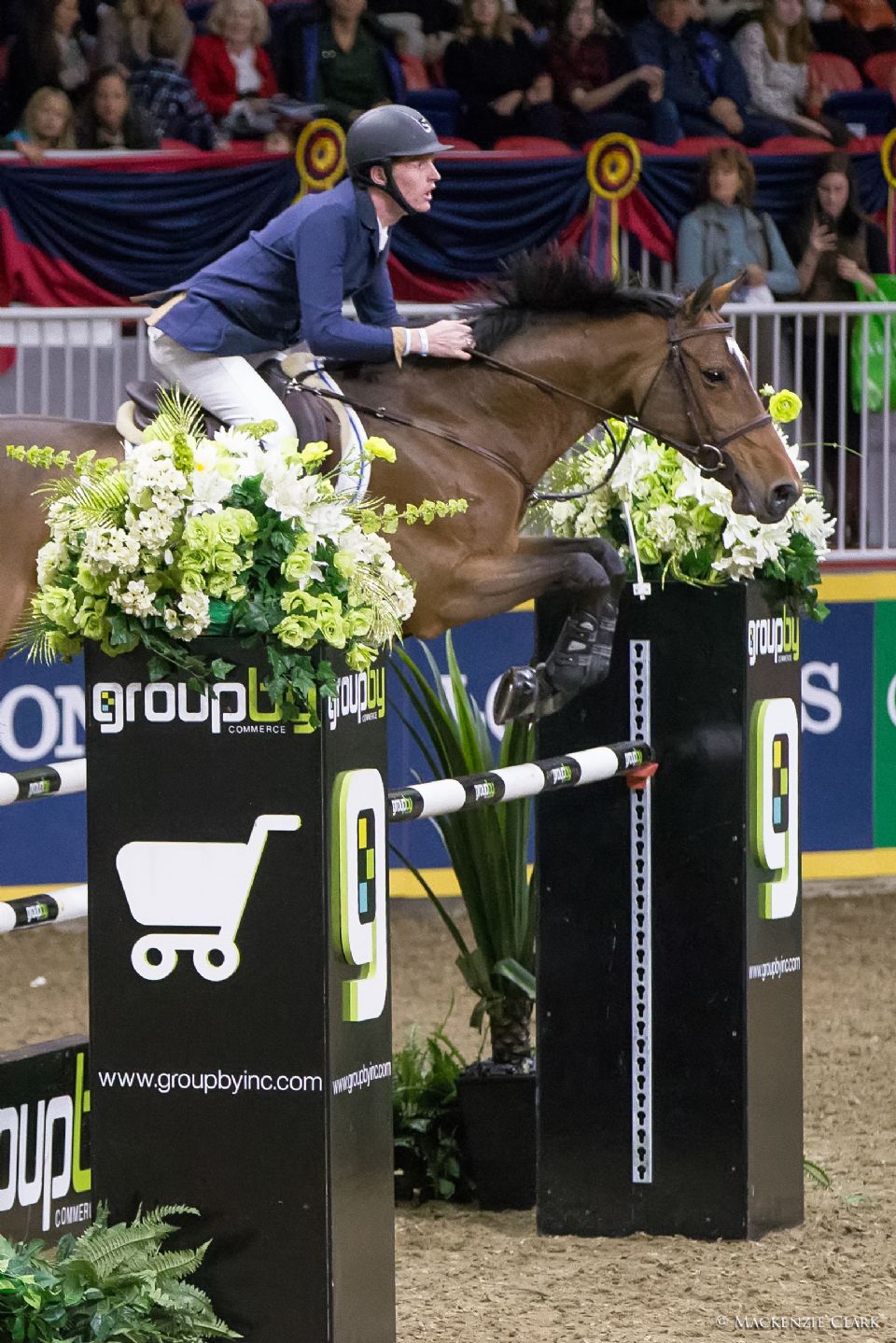 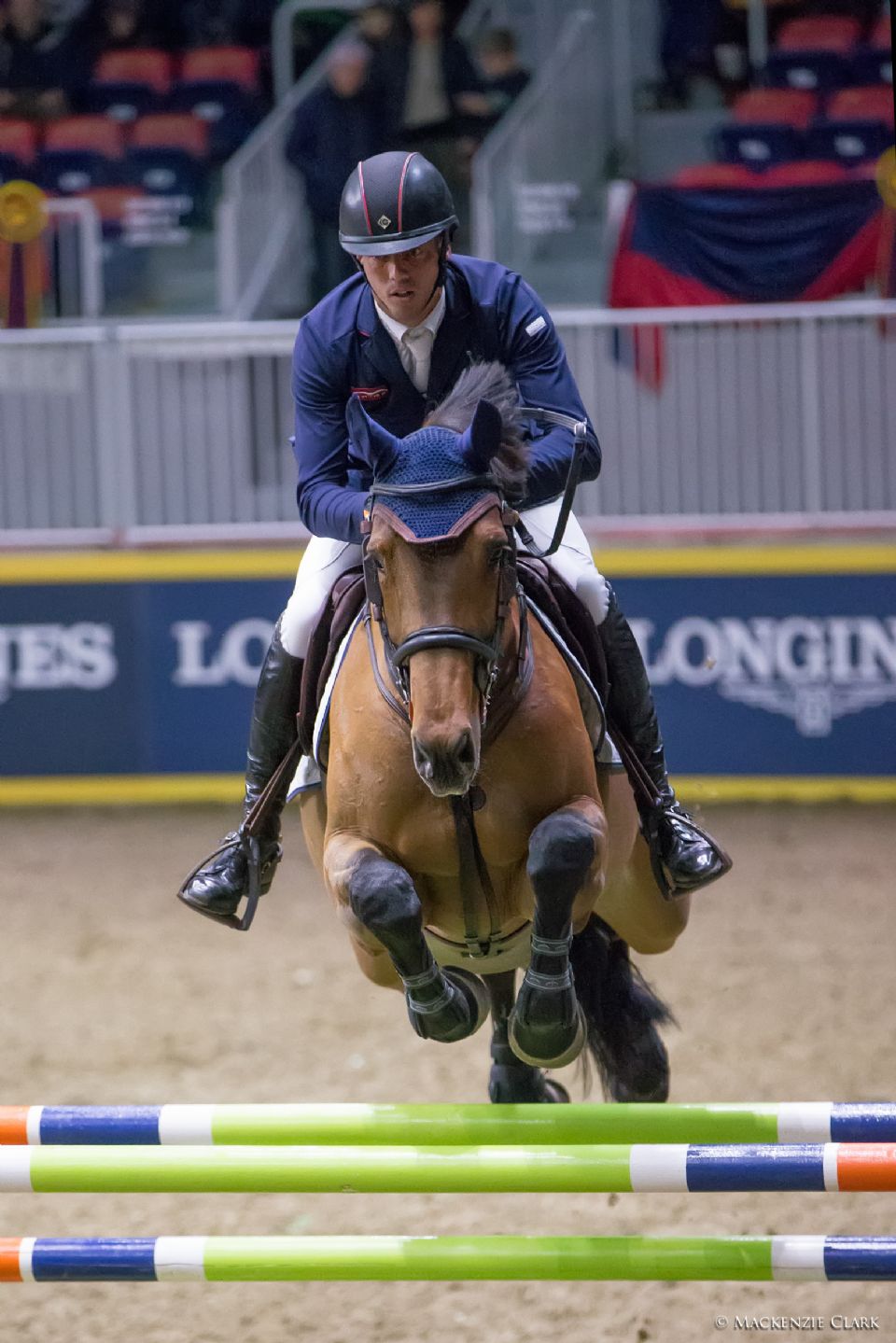 Harrie Smolders of The Netherlands raced to victory in the $20,000 Canine-Equine Challenge riding Apollonia 23 at the CSI4*-W Royal Horse Show on Saturday, November 12, in Toronto, ON.
Photo by Mackenzie Clark

In front of a sold-out crowd of more than 6,000 people, 21 riders challenged the final international show jumping event of the 2016 Royal Horse Show.  A total of seven jumped clear over the huge track set by course designer Bernardo Cabral of Portugal, but none could match the daring performance of Farrington and Creedance, a nine-year-old Dutch Warmblood gelding (Lord Z x Notaris) owned in partnership with RGC Farm.

“There were some really nice horses jumping here tonight,” said Farrington who was competing at the Royal Horse Show following a five-year absence.  “More than anything, more than winning, I’m thrilled with the progress of the horse.  I feel like he’s on track to become a very good grand prix horse.”

Farrington and Creedance posted a blistering jump-off time of 31.86 seconds that could not be matched.  Reigning Olympic Champions Nick Skelton of Great Britain and Big Star, owned by Oliver Robertson and Gary and Beverley Widdowson, came the closest, stopping the clock in 33.55 seconds.

“There was no way I could beat Kent so I went for second,” said Skelton who has been attending The Royal since the late 1970s.  “They have a great crowd here that really takes part in and enjoys the show.  I like coming here; it’s one of my favorite indoor shows.”

Ian Millar of Perth, ON, thrilled the home audience with a clear round in a time of 33.79 seconds riding Dixson while his 2008 Olympic silver medal teammate Mac Cone of King City, ON, was fourth in 36.26 seconds riding Gasper van den Doorn for Mark Samuel’s Chadburn Holdings, Inc.  2008 U.S. Olympic team gold medalist Laura Kraut rounded out the top five by posting the fastest four-fault effort in the jump-off with a time of 33.82 seconds riding Confu for St. Bride’s Farm.

Of the final test set by course designer Cabral, Farrington said, “I thought it was a creative course using three doubles instead of a triple, which we see all the time in indoor jumping.

“This is a really classy horse, and he’s learning at each show,” continued Farrington who is aiming Creedance at the 2017 Longines FEI World Cup™ Jumping Final to be held from March 29 to April 2 in Omaha, Nebraska.  “He’s a little bit special and very, very sensitive, so loud noises and things like that really set him off.  I thought maybe these indoor shows would be a little bit of an adventure, but he’s really settled down now and he’s handling it nicely.”

Leading Canadian Rider honours went to 12-time Greenhawk Canadian Show Jumping Champion Ian Millar, 69, of Perth, ON, who was presented with the Lt. Col. Stuart C. Bate Memorial Trophy in recognition of his consistent performances throughout the Royal Horse Show.

The All-Canadian Cup, generously sponsored by Susan Grange and Lothlorien Farm of Cheltenham, ON, was awarded to Millar’s mount, Dixson, as the Leading Canadian-owned horse.  Grange both presented and accepted the award for the 13-year-old Belgian Warmblood gelding she owns with her daughter, Ariel Grange.

The Tiffany & Co. Leading Lady Rider Award, introduced at the 2016 Royal Horse Show, was presented to Leslie Howard of the United States.  A 1996 Olympic team silver medalist, Howard was presented with a Tiffany horseshoe pendant of round brilliant diamonds in platinum on a 16-inch chain.

International competitors shared the spotlight with up-and-coming riders on Saturday afternoon as the future stars of show jumping were showcased in the final phase of the Alfred Rogers Uplands Under 25 National Championship.  Twenty-one-year-old Daniel Coyle of Ireland secured the win riding Fortis Fortuna for owners Susan and Ariel Grange of Lothlorien Farm based in Cheltenham, ON.  Coyle also clinched the overall Championship title, having also won phase one earlier in the week.  Quincy Hayes, 25, of Aurora, ON, was named reserve champion with Calgary 56, owned by Darcy Hayes, after placing second in phase one and fifth in phase two.

To the delight of horse and dog lovers alike, the $20,000 Canine-Equine Challenge, presented by the Toronto Star, saw top international riders each paired with a ‘Superdog’.  After riders navigated a show jumping track, their canine partner took off around a dog agility course.  The crowd cheered for its favourites as dogs of all breeds, shapes and sizes raced up, over, and through the obstacles.  In the end, it was Dutch Olympian Harrie Smolders who stopped the clock with the fastest time riding Apollonia 23, a 12-year-old Danish Warmblood mare, for owner Copernicus Stables, LLC.

For more information on the Royal Horse Show, the marquee event of The Royal Agricultural Winter Fair, visit royalfair.org/horse-show.  The Royal will be back for its 95th edition, running November 3-11, 2017.