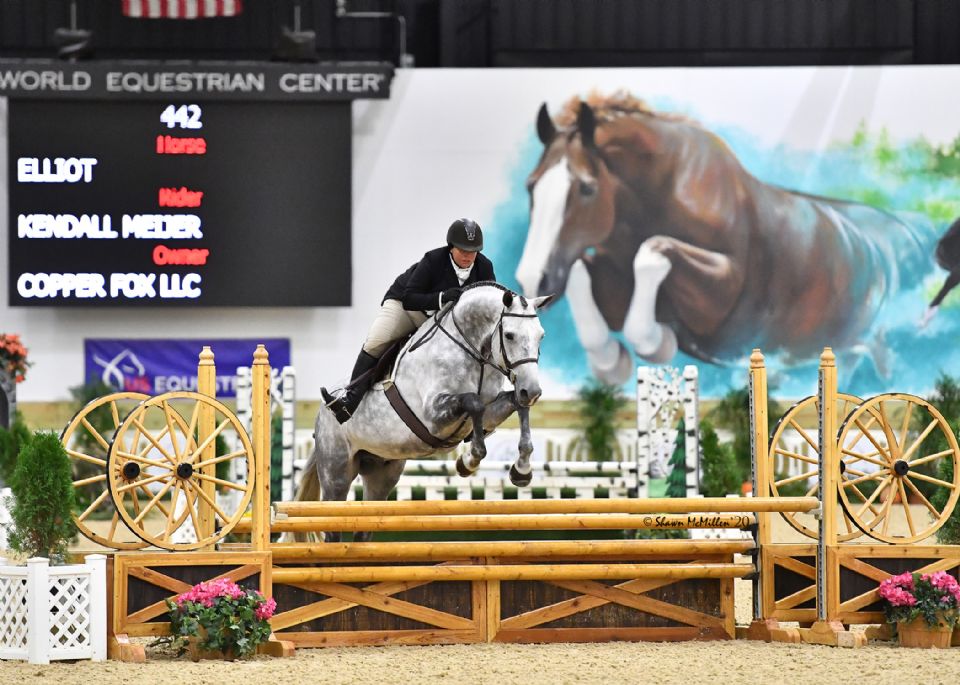 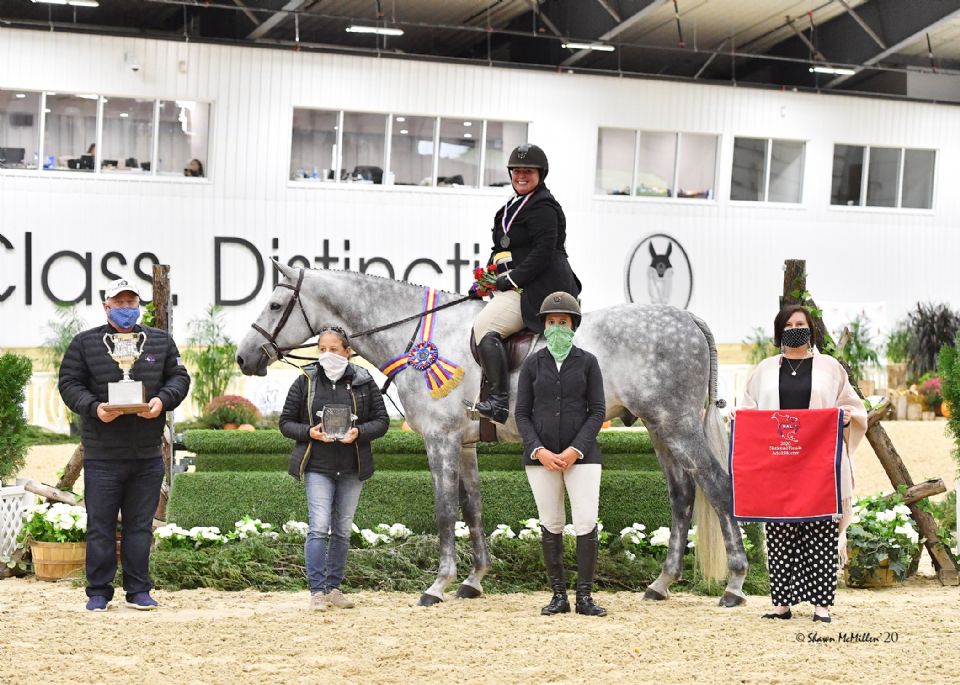 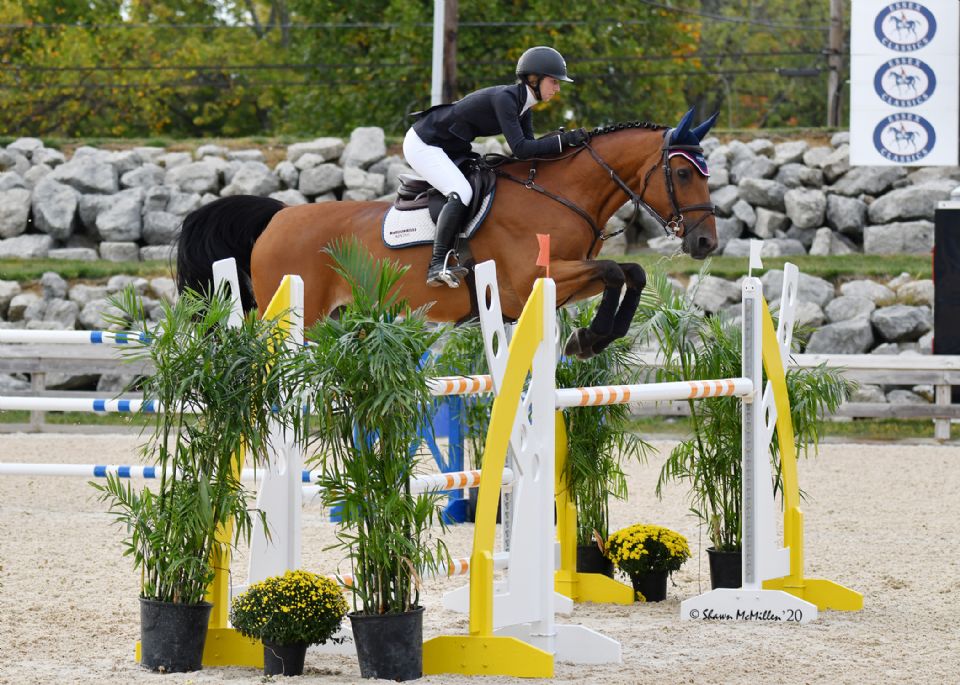 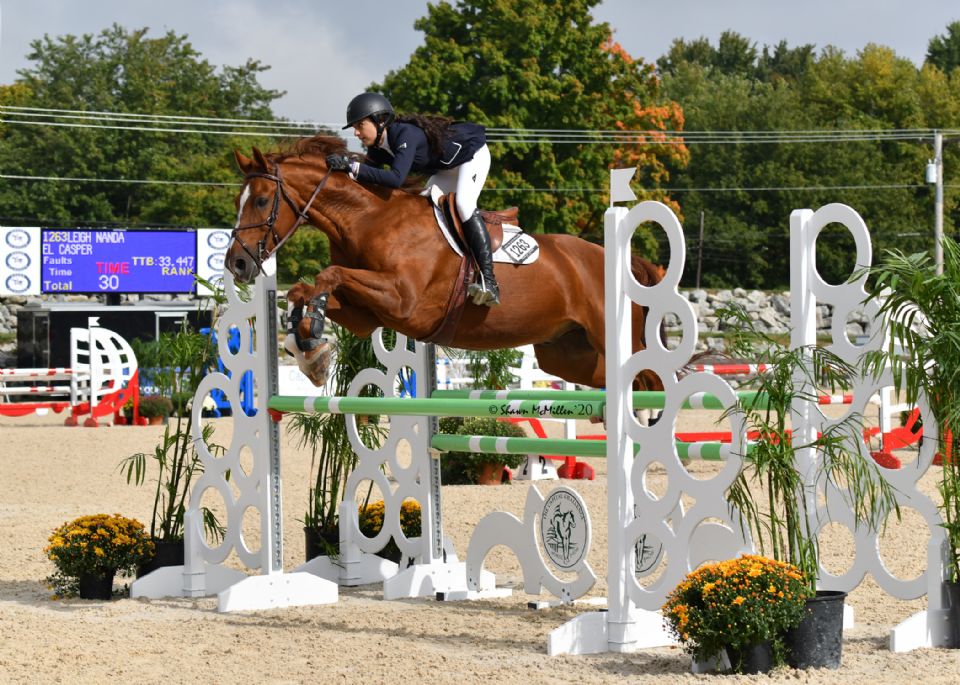 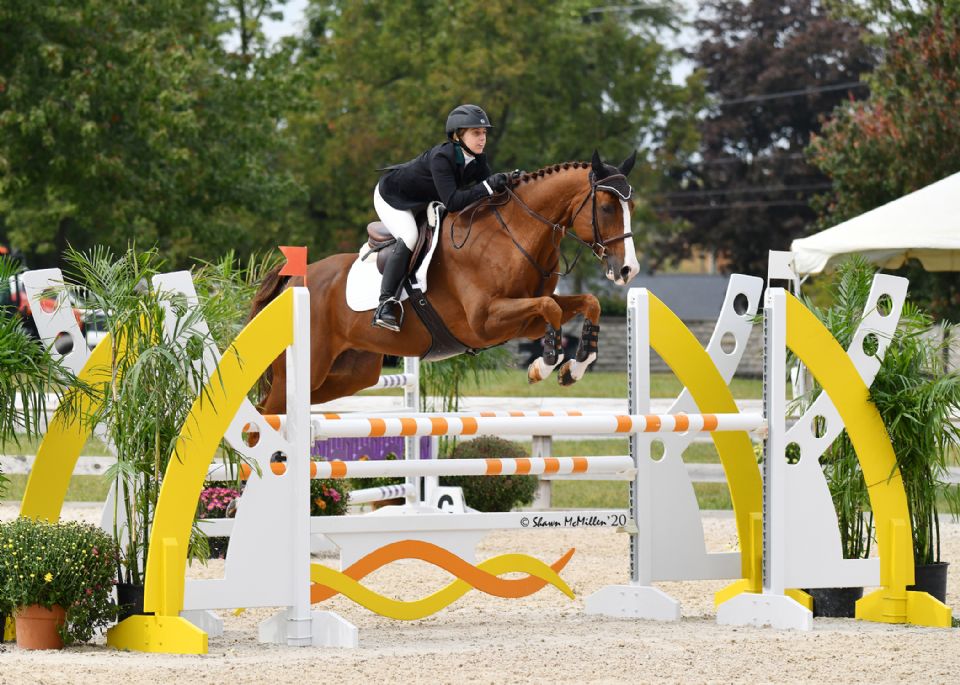 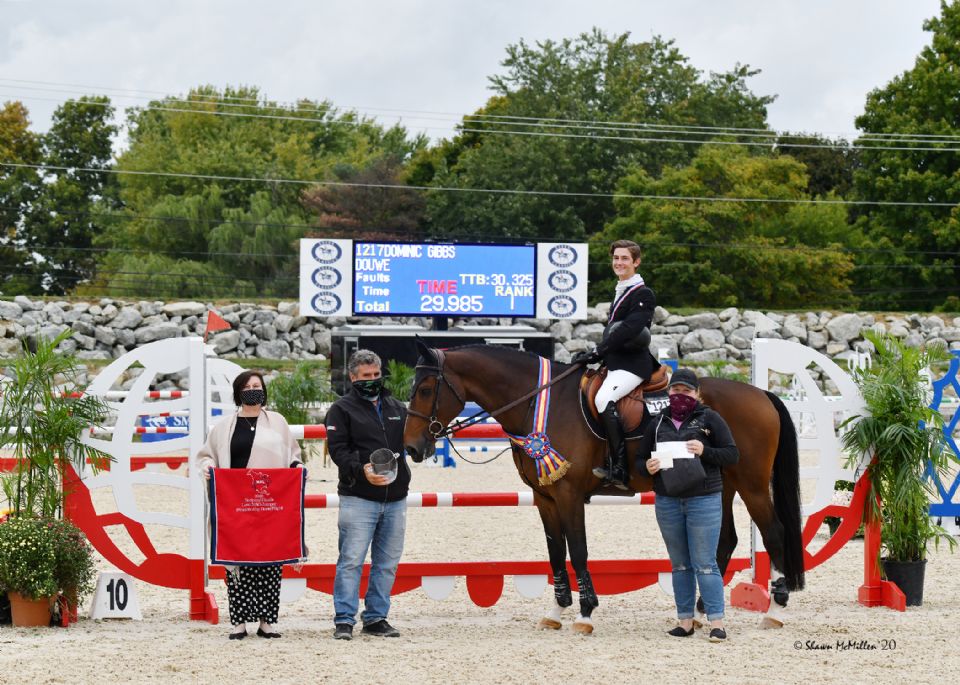 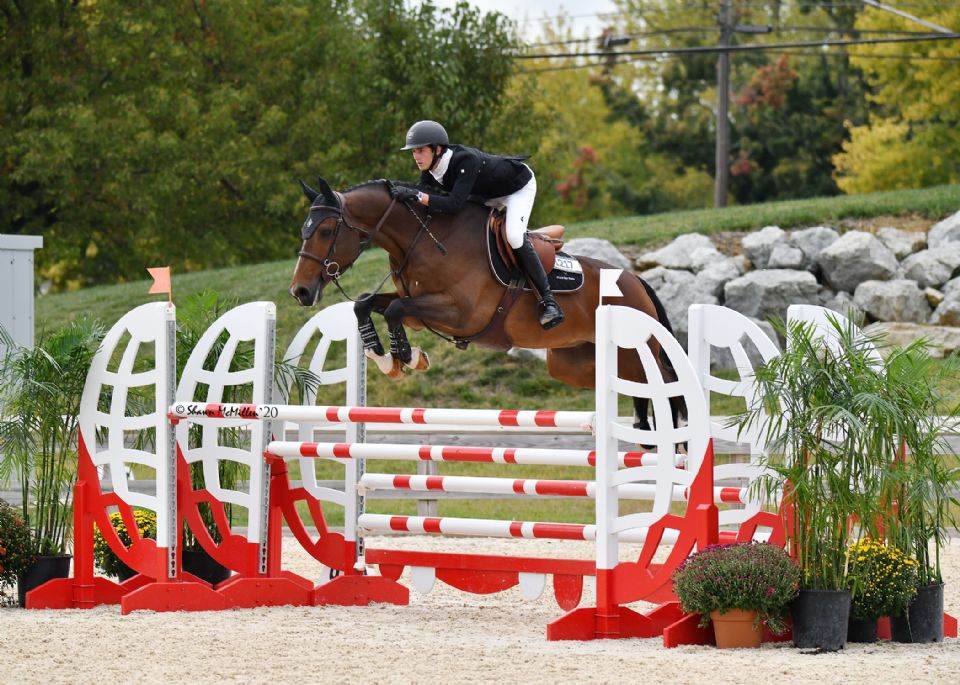 A field of 28 pre-qualified entries contested the NAL Adult Hunter Final, sponsored by the Famulak Family and Monkey Business LLC, and the top 12 returned in reverse order of their standings to jump a second round, designed by Ken Krome.

A score of 87 in the first round put Meijer and Elliot at the top of the leaderboard, and a second-round score of 84.75 for a 171.75 total cemented the pair’s victory. Second place with scores of 85.00, 83.75, and a 169.25 total went to Kelly Bauernschmidt of Bratenahl, OH, and her own Mojito. Rachel Boggus of Indianapolis, IN, and Subject to Change rounded out the top three with an overall score of 168.00.

“It’s so fun; I’ve done this class the last maybe 10 years, and I was always a bridesmaid,” said Meijer, who was presented with the Lisa A.H. Cudahy Perpetual Trophy for her victory.  “I made the top 12 a few times, but to get a win on my seven-year-old was really special. Capital Challenge is the cumulation of all your work through your winter and summer months and everyone comes together. It’s definitely a special show. It has amazing history of some phenomenal riders, professionals, junior, amateur and the like. It’s really special to be a part of that group.”

Meijer has had her winning mount, Elliot, owned by her own Copper Fox LLC, for the past year, and she jokes that the seven-year-old grey Selle Français gelding is “seven going on 17.”

“I like a horse that’s quiet and easy going, and he’s just those things,” said Meijer. “He’s very quiet which always works for me.

“It was really fun to show him in the Sanctuary,” continued Meijer, referencing the World Equestrian Center’s spacious main arena. “I’ve shown here at the World Equestrian Center quite a few times, but the jumpers are always in the Sanctuary, so it was a special treat to get to do the Adult Hunters in there! Each course rode really smoothly, and I thought the jumps were beautiful. They were not too exotic, so they really gave the chance to show the smoothness and quality that a good adult hunter is supposed to have.”

In the NAL Children’s Jumper Finals, presented by EquiFit, Leigh Nanda dominated the competition with her horse El Casper, accomplishing a perfect show after also taking the win in the Welcome the day prior.

The 15-year-old from Wilmette, IL, bested a 21-horse jump-off, crossing the timers in 31.488 seconds. Nanda was making her first Capital Challenge appearance and emerged victorious in every class, also earning the Leading Children’s Jumper Rider award.

“I took a stride out in the first line and the last line, so I think that really did it for me,” said Nanda of her winning round. “Casper takes a lot of leg; he looks and feels deceptively slow, but he’s got a really big stride. He’s really smooth if you meet all the jumps in stride. My trainer, Lance Williamson, always says, ‘Smooth is fast!’”

Twenty-nine riders took on the Joseph Carnicom-designed course, with 16 jumping double-clear efforts. Reserve honors were awarded to Katalena Prusso and Camera Ready on a time of 33.44 seconds, and third place went to Elizabeth Cram and Vancouver IV after they crossed the timers in 33.94 seconds.

Emerging victorious in the NAL Adult Jumper Finals, presented by SmartPak, was Ellen Halle of Upperco, MD, with Iggy Pop, who completed the jump-off in a time of 34.01 seconds. Halle topped the 27 starting entries and took on the short course with nine other competitors, ultimately taking home the Leading Adult Amateur Jumper Rider title, as well.

“The jump-off was icing on the cake for me,” Halle said of her win. “This was my first final, and I was just super excited to jump a clear round and have the opportunity to jump off. I was mainly trying to enjoy the experience but also be a little competitive and take a few risks just because it was awesome to even be there. I wanted to take advantage of the opportunity.”

The winning pair were matched together in March of this year, and the 2020 Capital Challenge Horse Show was Halle’s first ever final.

“This is definitely worth the trip, and I am super grateful to be here and be part of a competition with such high caliber athletes,” said Halle. “They’ve really gone the extra mile to make it a great experience for all the exhibitors.”

Olivia Parr claimed second aboard her first entry Falco van de Nordhooek on a jump-off time of 34.26 seconds and also took home third with High Valley on a time of 36.70 seconds.

Dominic Gibbs topped the NAL Low Junior/Amateur/Amateur-Owner Jumper Finals, presented by HorseFlight, aboard Douwe with a double-clear effort and a winning jump-off time of 29.98 seconds. The Colorado Springs, CO, rider was the last of 12 entries to jump off and one of five double-clear rides.

“It definitely was a competitive jump-off,” said Gibbs. “These were some of the best horses in the country, but I know I have one of the fastest. He makes my job really easy and fun. I knew I could take a chance and take some tough inside turns that maybe some of the other horses and riders wouldn’t be able to do.

“I’ve been riding him for around two years now,” Gibbs said of his horse Douwe. “My sister, [Jordan Gibbs], is actually going to start riding him this fall. This was my last show with him, so it was a great note to end on. He’s really one of the most incredible horses I’ve ever gotten to know. He’s so fast, and he’s really come a long way.”

Second place and the Leading Junior Jumper award went to Ellie Bruder with Violette de Launay, with a jump-off time of 30.32 seconds. Rounding out the top three was Ellie Ferrigno and Shark with a time of 31.52 seconds.

After an unfortunate fall in the NAL Low Junior/Amateur/Amateur Owner Jumper Finals, Emma Seving pulled off a one-two finish in the Medium Junior/Amateur/Amateur Owner Jumper Classic aboard Fantast and Brighton Bay, respectively. Ten horse-and-rider combinations jumped the first round clear, but Seving’s time of 37.35 seconds in the jump-off took the win by nearly two seconds.

“Falling off is scary no matter how it happens,” said Seving. “I’m just glad my horses and I were safe, and I was able to get back on for my next class! I’m lucky that my horses give me so much confidence, so I still felt good to go back in there on the next two.”

“I’m excited I rode so consistently because they were first and second in the last classic we did,” Seving continued. “It was really cool to do that twice in a row and feel confident and that I’m doing something right.”

Third place went to Jaime Auletto with Dynamite, finishing double-clear with a jump-off time of 40.12 seconds.

The NAL qualifying season runs from September 1 through August 31. NAL qualifying classes are open to all competitors, but only current members are awarded points. By joining the NAL, riders can accumulate the points necessary to qualify for the finals. Annual memberships are only $40 per rider. Further information on the NAL is available by calling 717-867-5643, emailing NAL@Ryegate.com or visiting www.ryegate.com.  Follow the NAL on Facebook here.

Competition at the 2020 Capital Challenge Horse Show continues on Tuesday, beginning with the professional hunter divisions at 8 a.m.

Now in its 27th year, the Capital Challenge Horse Show, presented by the World Equestrian Center, sets itself apart with a distinct and unique focus on preeminent hunter and equitation competition. Held each autumn, the 2020 edition of the Capital Challenge Horse Show continues through October 4 at the World Equestrian Center in Wilmington, OH. The 10 days of competition will include prestigious equitation events, jumper divisions, the World Championship Hunter Rider (WCHR) Finals, the $25,000 3’ and 3’3” Green Hunter North American Championships, and more, with many of the country’s best horses and riders competing in junior, amateur, and professional divisions.