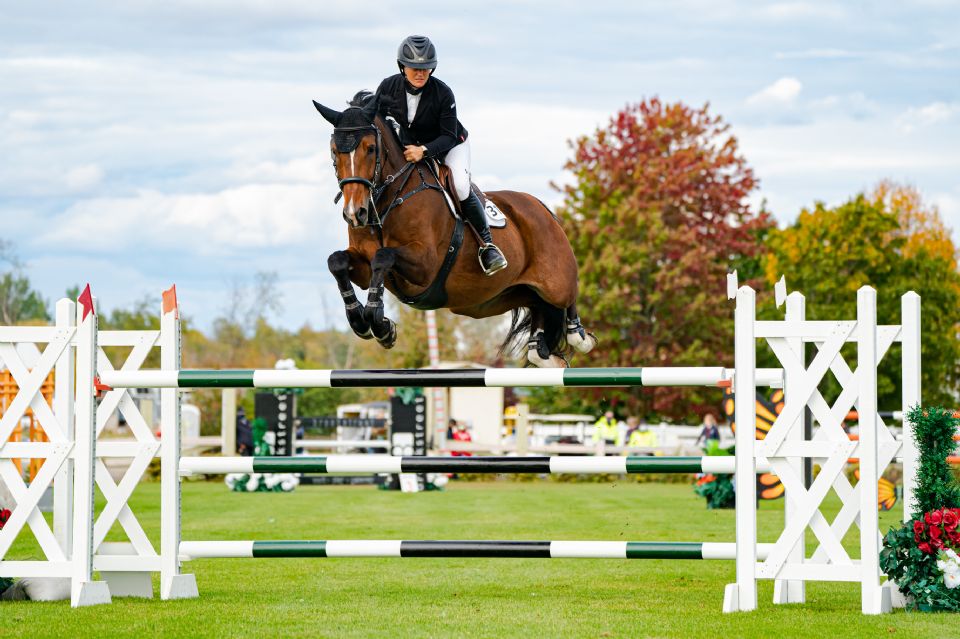 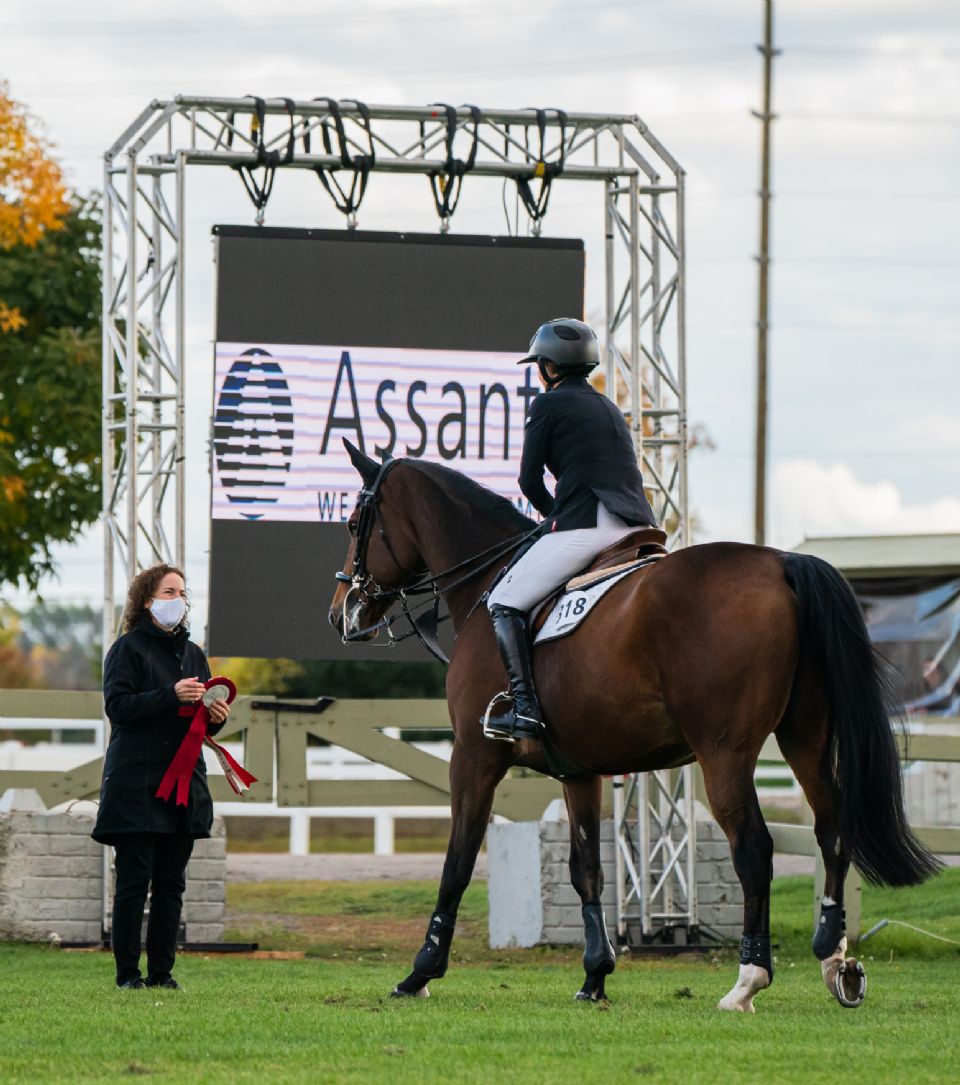 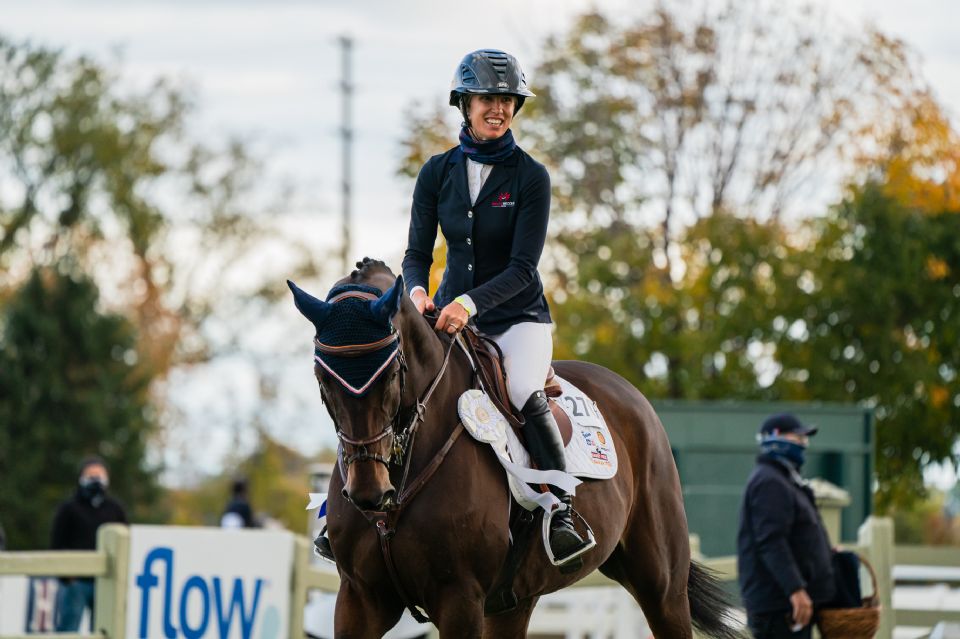 Kelley Robinson of Russell, ON, won the $30,000 Assante Wealth Management Grand Prix on October 3, 2020, to close out seven weeks of show jumping competition held at Wesley Clover Parks in Ottawa, ON.

A total of 29 competitors tackled the richest grand prix event staged in eastern Ontario this season, thanks to the generous support of sponsor Assante Wealth Management.  Course designer William Dean-Stobie of Calgary, AB, set a track featuring fences measuring 1.40m in height on Wesley Clover Parks’ renowned grass jumping field.  Eight horse-and-rider combinations jumped clear in the first round to set the stage for a thrilling jump-off where speed became the name of the game.

Robinson had her work cut out for her, facing off against two Canadian Olympians.  Mac Cone of King City, ON, qualified two horses for the jump-off, Entrepreneur and Con Couleur, both owned by Mark Samuel’s Chadburn Holdings Inc., as did Amy Millar of Perth, ON, riding Ericson and Truman.  Darrin Dlin of Calgary, AB; Grant Field of Russell, ON; and Paul Halpern of Sainte Anne des Plaines, QC, rounded out the jump-off contenders.

When Robinson entered the ring for the jump-off, she was chasing the leading time of 35.44 seconds set by Millar and Ericson, an 11-year-old Dutch Warmblood gelding (Padinus x Iroko) owned by Millar Brooke Farm Ltd. and Partners.  Proving she was up to the challenge, Robinson shaved time with an impressive turn before stopping the clock in 34.23 seconds and moving into the lead with Blue’s Yer Daddy, her 13-year-old Canadian-bred gelding (Mr. Blue x Lys de Darmen).

Millar still had another chance at victory as the final jump-off contender but her time of 34.68 seconds with Truman, an 11-year-old Selle Francais gelding (Mylord Carthago x Kolibri) owned by Overlund and her family’s Millar Brooke Farm Ltd., wasn’t fast enough to knock Robinson from the top of the leaderboard.

“I thought for sure Amy was going to beat me, she’s lightning fast!” exclaimed Robinson following her win.  “I really thought she had me, so I was surprised.  They had a great field of competitors out here today.”

Hailing from nearby Russell, ON, where she operates Cimarron Show Stables, Robinson and her students have attended all seven weeks of the Assante Summer Series offered by Wesley Clover Parks.  Robinson also won week two’s featured event, the $10,000 1.30m Terlin Construction Grand Prix, riding Lise.  Blue’s Yer Daddy and Lise are horses that Robinson bred herself, and both have the same dam (mother), Robinson’s former top horse, Esprit de Lys.

“Blue’s Yer Daddy has jumped a lot of big classes for me,” said Robinson.  “He has a big stride and doesn’t look like he’s going as fast as he is.  I’ve known him all my life and we’ve formed a good partnership now.  And Lise is small and fast, and just as competitive as her big brother!”

In a year where few competitions were held due to the COVID-19 pandemic, Robinson especially appreciated the opportunity to compete with her horses and her students.

“We have a lot of really good riders in the Ottawa Valley and Wesley Clover Parks is an important venue for us,” said Robinson, 37.  “It’s great to have these shows at a venue where we can compete in a big, international-caliber ring.  I’m so thankful to Wesley Clover Parks for offering us so many weeks of competition and to the sponsors for putting up the money in this very strange year.  It’s always great to ride here, let alone win.”

While COVID-19 restrictions were strictly adhered to, a limited number of spectators were treated to great sport and hospitality for the $30,000 Assante Wealth Management Grand Prix.  The ‘Ringside Rally’ offered spectators a great view of the expansive grand prix field from the comfort of their car, complete with a picnic lunch of their choice from either the Brookstreet Hotel or the King Eddy.

“It’s undoubtably been a difficult year for everyone, us included, but more importantly the entire equestrian community and beyond,” said Karen Sparks, Executive Director of Wesley Clover Parks.  “It was deeply important to us to provide a circuit of shows for our core group of equestrian competitors.  The ripple effect of all the cancelled shows on athletes, officials, and contractors is something that we didn’t take lightly.

“It was a lot of work to organize these events, especially given the extra challenges that COVID-19 presented, but it has been very satisfying to see the positive impact that our work had,” continued Sparks.  “I can’t thank our sponsorship partners enough for their unwavering support, and especially RBC and Assante Wealth Management for stepping up to make this circuit happen.”