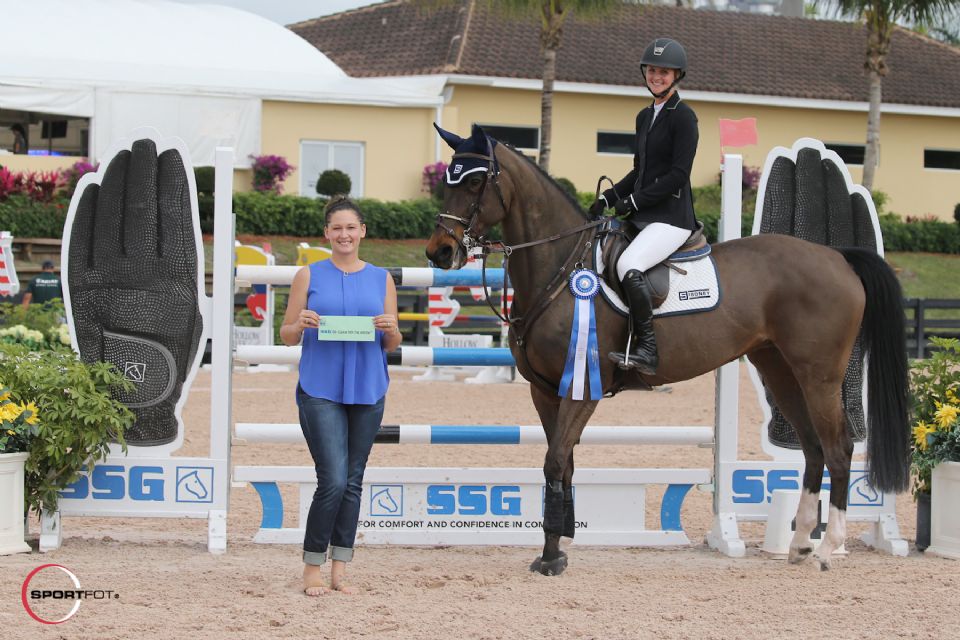 SSG Gloves “Go Clean for the Green” promotion representative Lindsay Brock (left) presents Kaely Tomeu and Gentille with a $1,000 bonus following her win in the $15,000 Maybach – Icons of Luxury High Amateur-Owner Jumper Classic during Week 6 of the Winter Equestrian Festival in Wellington, FL.
Photo by Sportfot

Kaely Tomeu with her SSG Gloves “Go Clean for the Green” bonus.
Photo by Jump Media

Tomeu was one of 23 entries to contest tracks set by 2016 Olympic course designer Guilherme Jorge of Brazil.  The 20-year-old rider then topped a ten-horse jump-off riding Gentille, owned by Siboney Ranch, to take the win and a $1,000 SSG Gloves bonus in recognition of her loyalty to SSG 'Digital' style riding gloves.

“I wear the gloves because they are the best,” said Tomeu.  “I've tried multiple other brands and my reins slip right out of my hands.  These last the longest, they don't rip, and they are my favorite – I can't ride without them.”

A past winner in the SSG Gloves “Go Clean for the Green” promotion, Tomeu wears SSG 'Digitals' for all of her classes.

“I don't do it for the bonus check, I do it because they are the best gloves,” she added.

While basking in a $15,000 victory, Tomeu has made a tradition of splitting her SSG Gloves bonus with her groom, Milton Portillo.

“When I won last year, I split the money with him and I will do the same this time,” she said.  “He puts in all the work and he's an amazing groom.”

Tomeu's partnership with Gentille is a relatively new one after recently adding the 10-year-old Belgian Warmblood mare she characterizes as “unbeatable” to her string.  This week marked their third show together and their first time competing in the High Amateur-Owner Jumper division.  Having also claimed the blue ribbon on Thursday, the pair was named division champions following their win on Sunday.