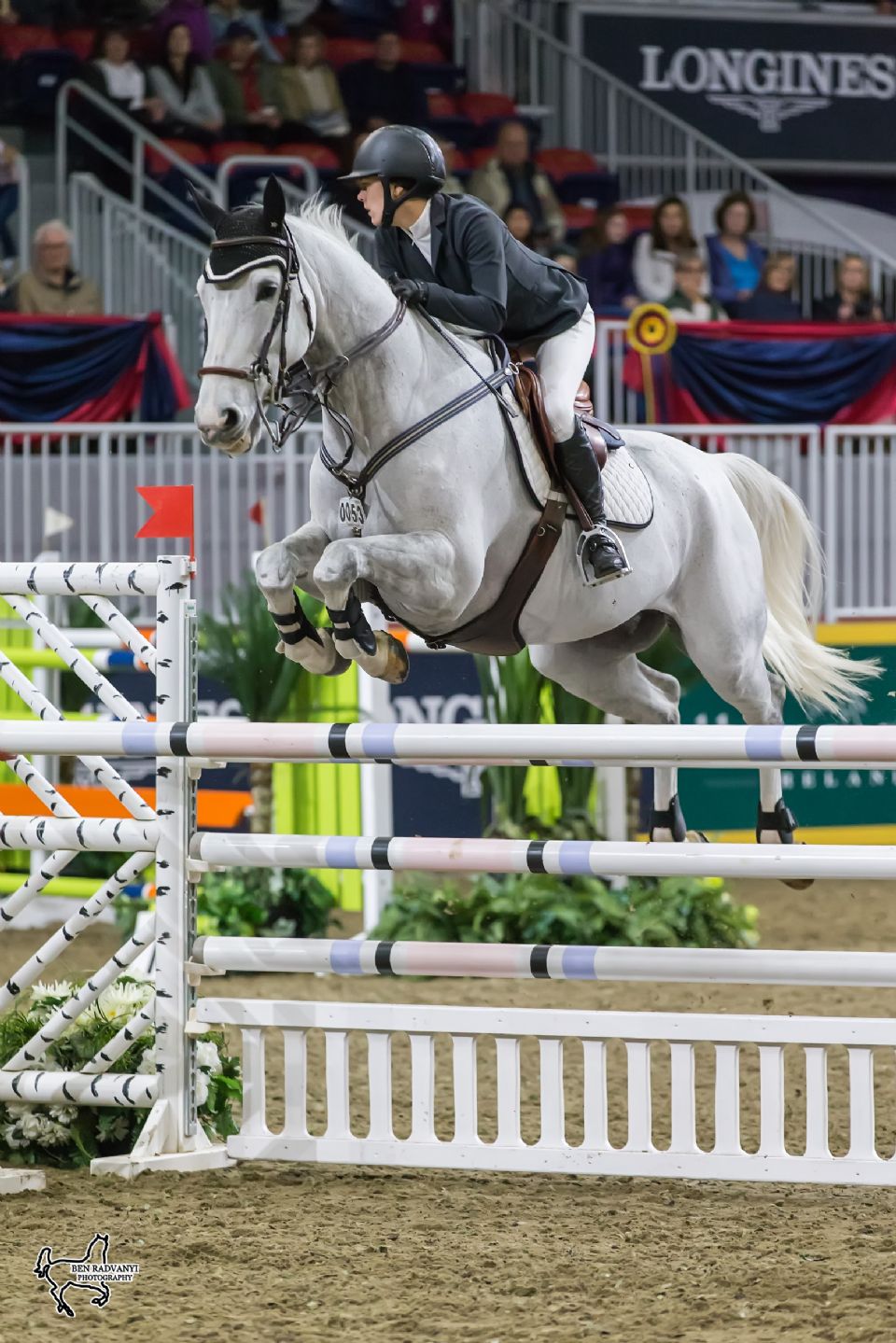 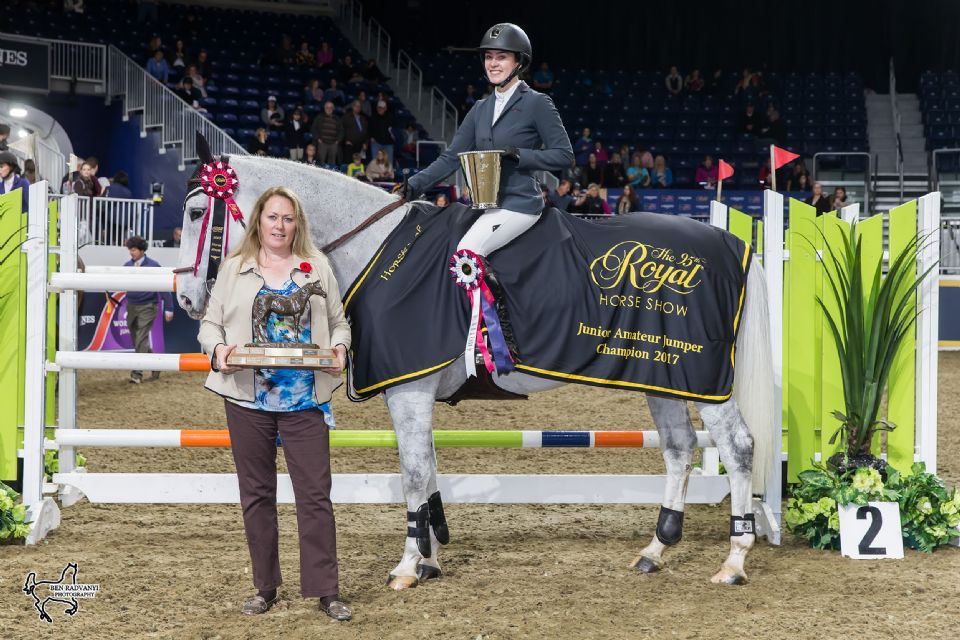 Julia Madigan and Farfelu du Printemps were presented with the Canadian Equestrian Team Challenge Trophy as the Junior/Amateur Jumper Champions by Karen Hendry-Ouellette of Equestrian Canada, on Sunday, November 5, at the Royal Horse Show in Toronto, ON.
Photo by Ben Radvanyi Photography 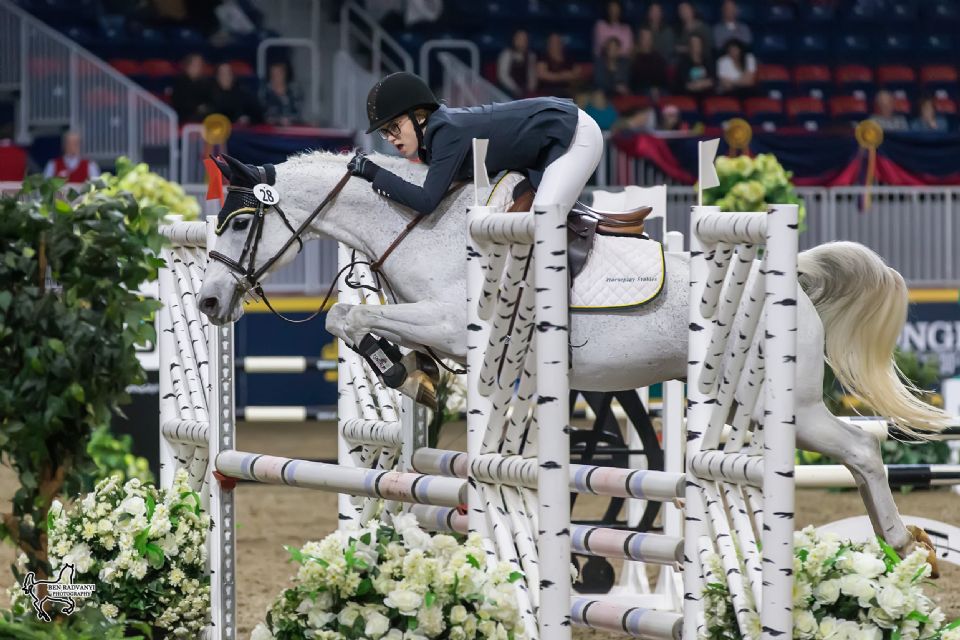 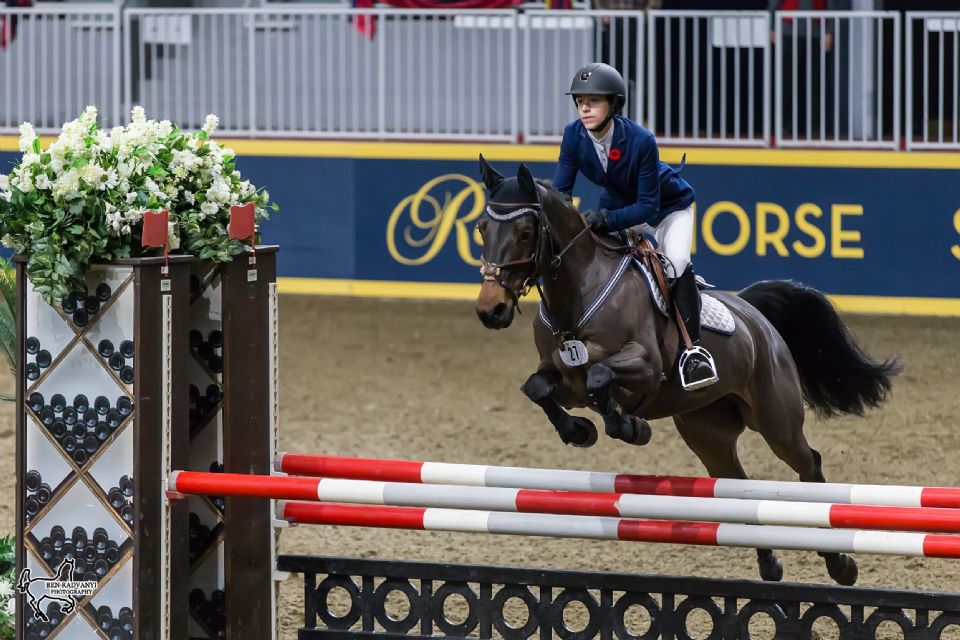 Julia Madigan of Vancouver, BC, won the $10,000 Dominion Regalia Limited Junior/Amateur Jumper Royal Stake on Sunday, November 5, at the Royal Horse Show, held as part of the 95th Royal Agricultural Winter Fair running through November 13 in Toronto, ON.

In her Royal Horse Show debut, Madigan claimed victory riding Farfelu du Printemps, a 12-year-old Belgian Warmblood gelding (Action-Breaker x Darco) owned by John Madigan.  Four entries jumped clear over the track set by 2016 Rio Olympic course designer Guilherme Jorge to advance to the jump-off.  Madigan was again clear in a time of 35.25 seconds to claim the victory over Alexanne Thibault of Boucherville, QC, who placed second riding Chacco Prime with a double-clear effort in 36.42 seconds.  Asta Torokvei of King City, ON, took third in 40.39 seconds aboard Camara, and also earned the Equitek Turn-out Award for the impeccable presentation of her mount.

Sabrina Lefebvre of St. Marc Sur-Richelieu, QC, stopped the clock in 36.17 seconds but one rail down left her in fourth place riding Alaska.  Sadie Leon of Port Credit, ON, rounded out the top five riding Camilla.

Having also won the Junior/Amateur Speed class and placed fourth in the Welcome class, Madigan and Farfelu du Printemps were named the overall Junior/Amateur Jumper Division champions.  In recognition of their accomplishment, they were awarded the Canadian Equestrian Team Challenge Trophy, presented in memory of Andre Bollinger.

“This is my first time competing here,” said Madigan, 21, a third-year mechanical engineering student at Queen’s University in Kingston, ON.  “I have been at school since September and only riding on the weekends, but I have been training harder the last two weekends to come here.  It means a lot; this is the championship of Canada and is very well known.”

Madigan trains under the direction of Canadian Olympic team silver medalist Jill Henselwood of Oxford Mills, ON, who takes over the ride on Farfelu du Printemps when Madigan is focusing on her studies.  In fact, Henselwood and Farfelu du Printemps partnered to win the 2015 Canadian Show Jumping Championship title at the Royal Horse Show.  Madigan herself is coming off a banner year, having claimed individual gold and team silver medals at the Adequan/FEI North American Young Rider Championships in Saugerties, NY, in July.

Makayla Clarke of Hilden, NS, riding Twisted and Grace Munro of Wolfville, NS, riding Ever So Clever tied for the win in the $5,000 MarBill Hill Royal Pony Jumper Final after both jumped clear and stopped the jump-off timers in the exact same time, 23.10 seconds.

Both hailing from Nova Scotia, Clarke and Munro have been friends for four years and have competed against each other in the Pony Jumper division all season.  While they weren’t expecting the Royal Pony Jumper Final to end in a tie at the Royal Horse Show, it is not the first time the two riders have finished an event in a dead heat.

“This has happened several times at the Windsor Spring and Summer Horse Shows in Nova Scotia,” said Clarke, 15, who was competing at the Royal Horse Show for the first time.  “We have shown together a lot and it has been a long season to get here.  At first, it was nerve racking to be here, but once you’re in that ring, it feels like any other horse show with a lot more atmosphere.”

Of her experienced mount, Twisted, Clarke noted, “He’s still going strong at 22 years of age.  He is a little firecracker, but a lot of fun to ride.  After this show, I will start looking for a horse to move up on.”

Munro, meanwhile, has owned her pony for four years, and keeps her at home where she cares for Ever So Clever herself.  The Royal Horse Show marked the pair’s last competitive appearance together, as Ever So Clever has been sold and Munro will compete on horses next season.

Savannah Singh of Stoney Creek, ON, placed third with a jump-off time of 23.64 seconds riding Northwind Darby for owner and grandmother, Cara Whitham.  Erin Oswald of Rigaud, QC, took fourth with a time of 24.74 seconds riding Brookside Look At Me, owned by Sandra Costanzo O'Brien, while Ella Marquis of Caledon, ON, rounded out the top five with four faults in the jump-off riding Fluff on Fire for owner Mark Marquis.

Oswald’s performance in the MarBill Hill Royal Pony Jumper Final helped her and Brookside Look At Me earn the division championship title.  The pair was second in the Stake earlier in the day and third in the Welcome class held Saturday, November 4.  Having won the Welcome and finished third in the Stake, Kilby Brunner Deforest of Hillsburgh, ON, was named reserve champion riding Beaverwood's Kauri.