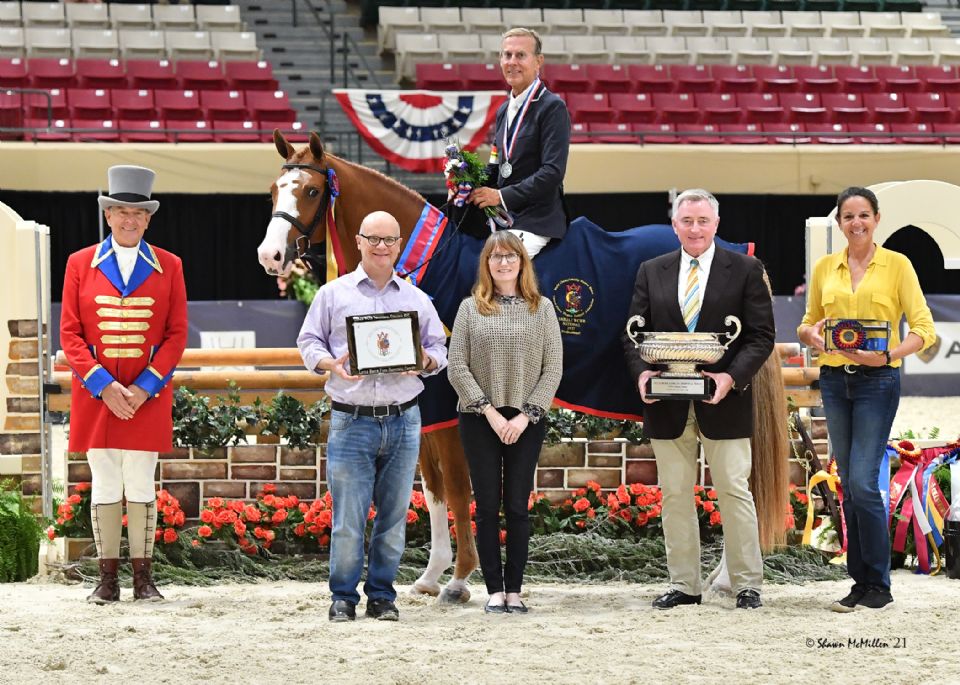 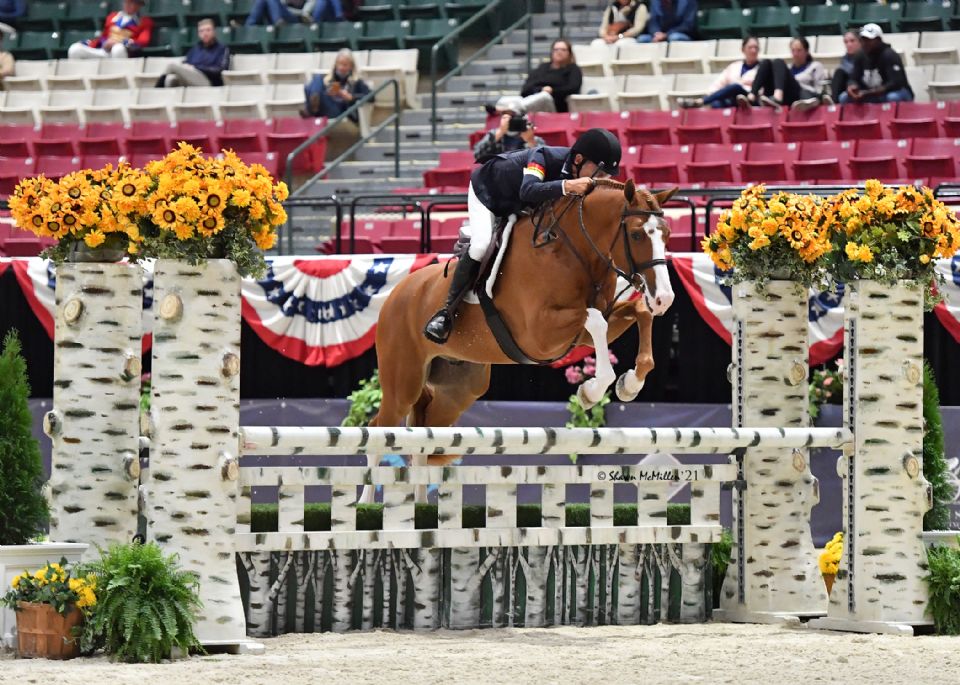 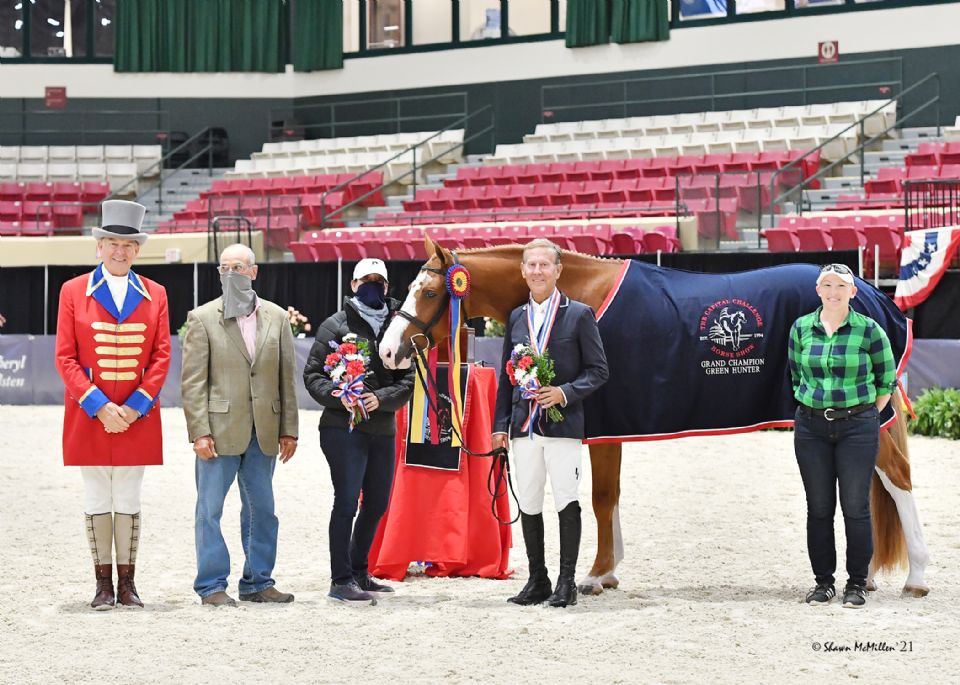 John French and Babylon in their winning presentation for the Grand Hunter Champion.
Photo by Shawn McMillen Photography 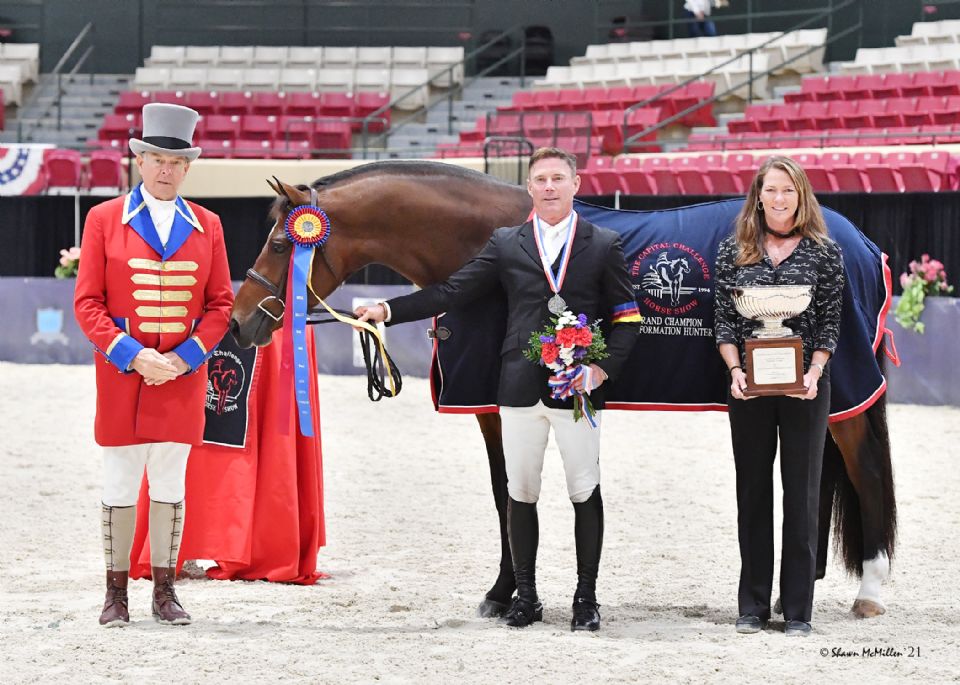 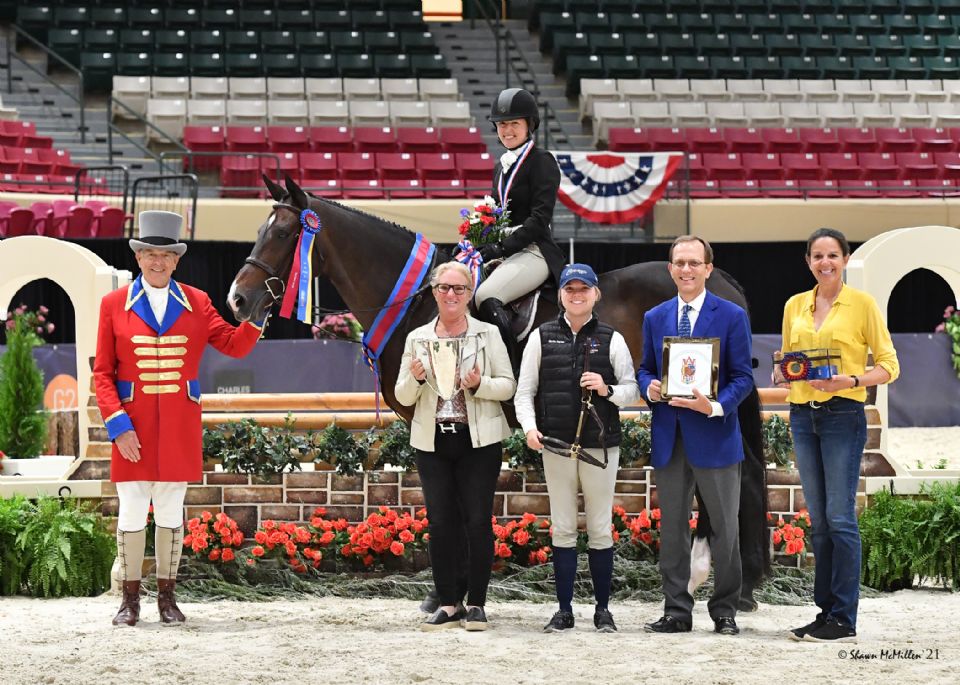 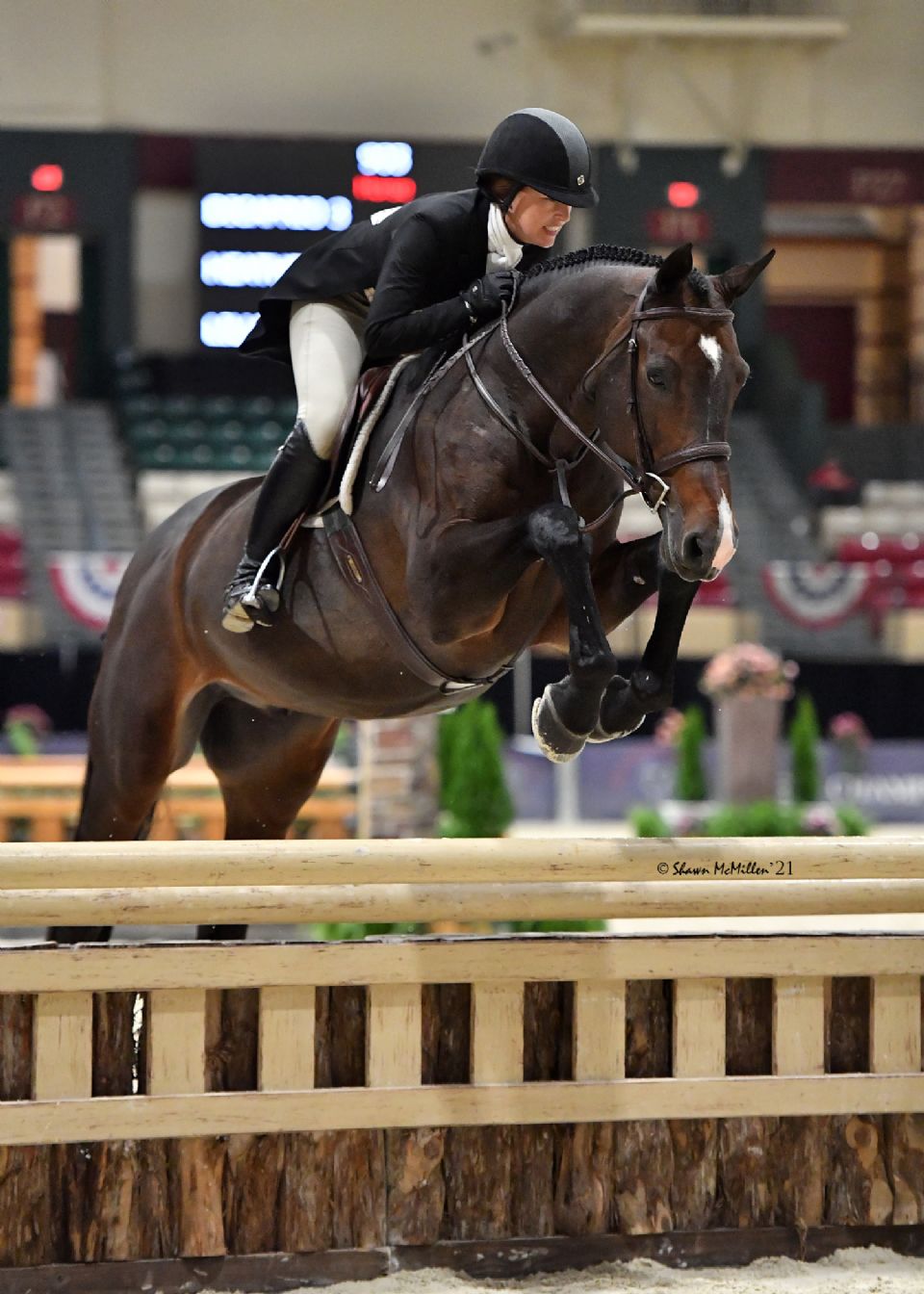 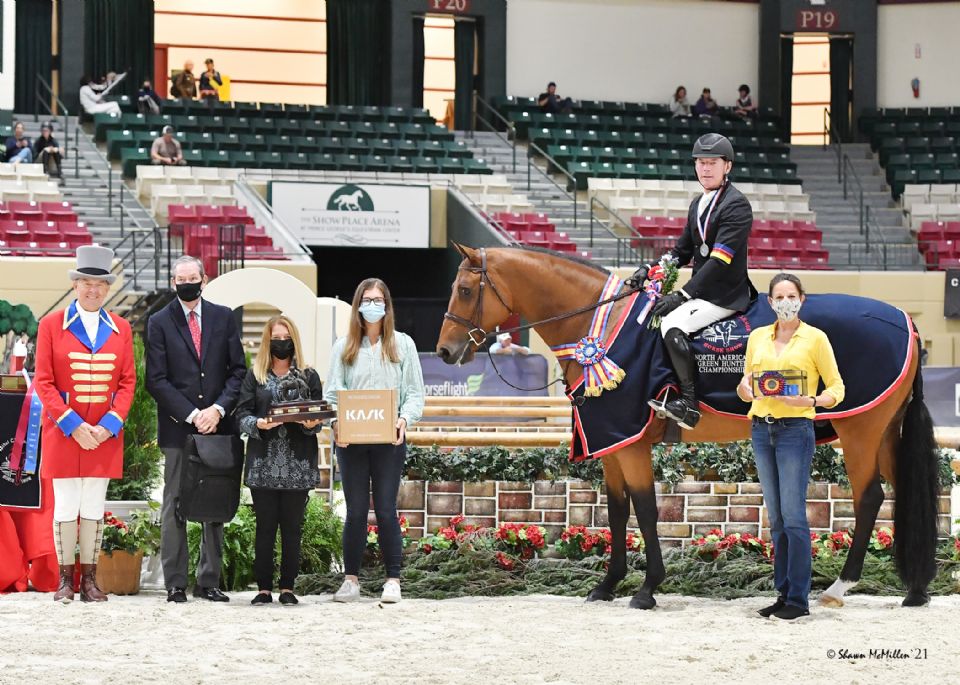 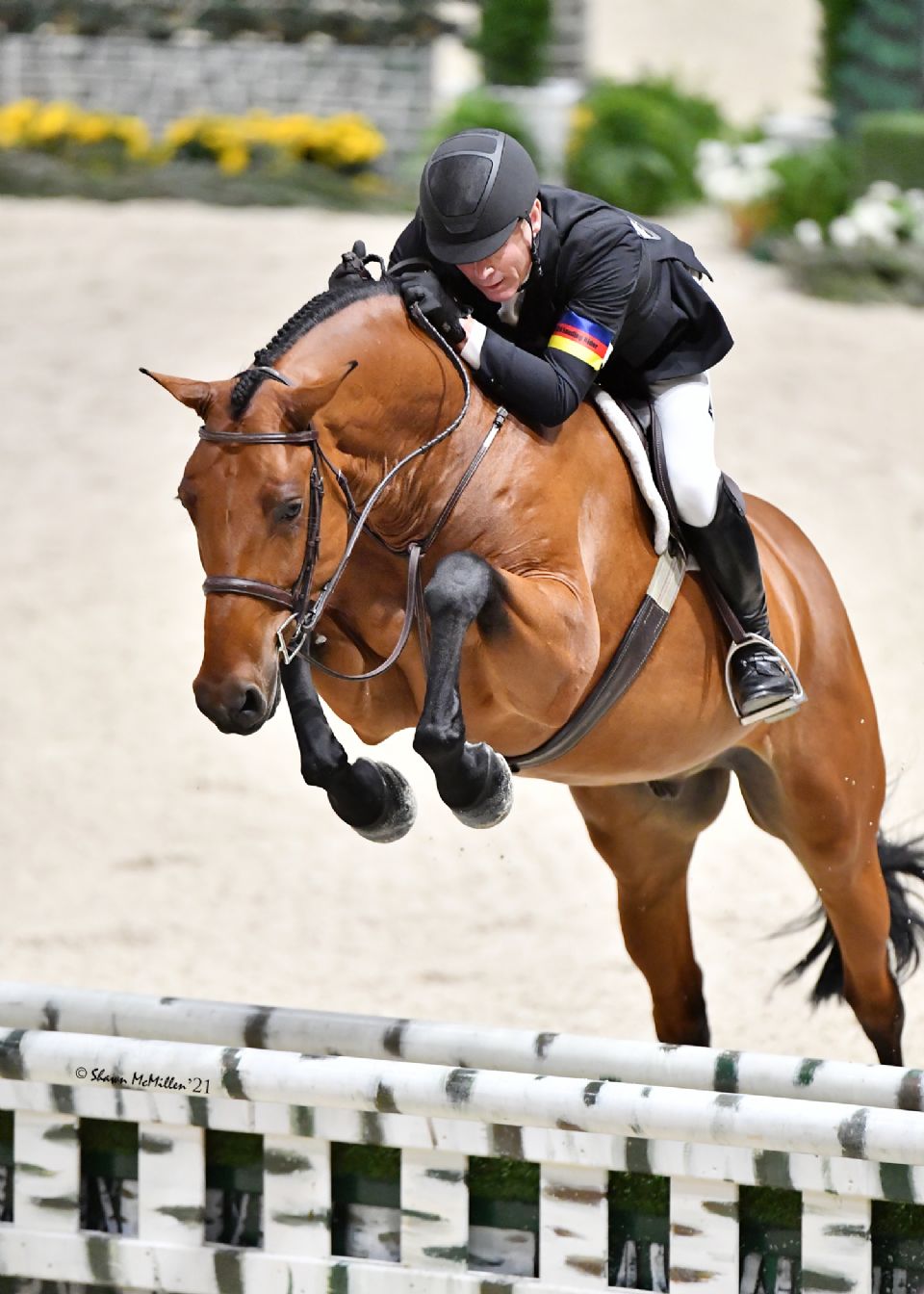 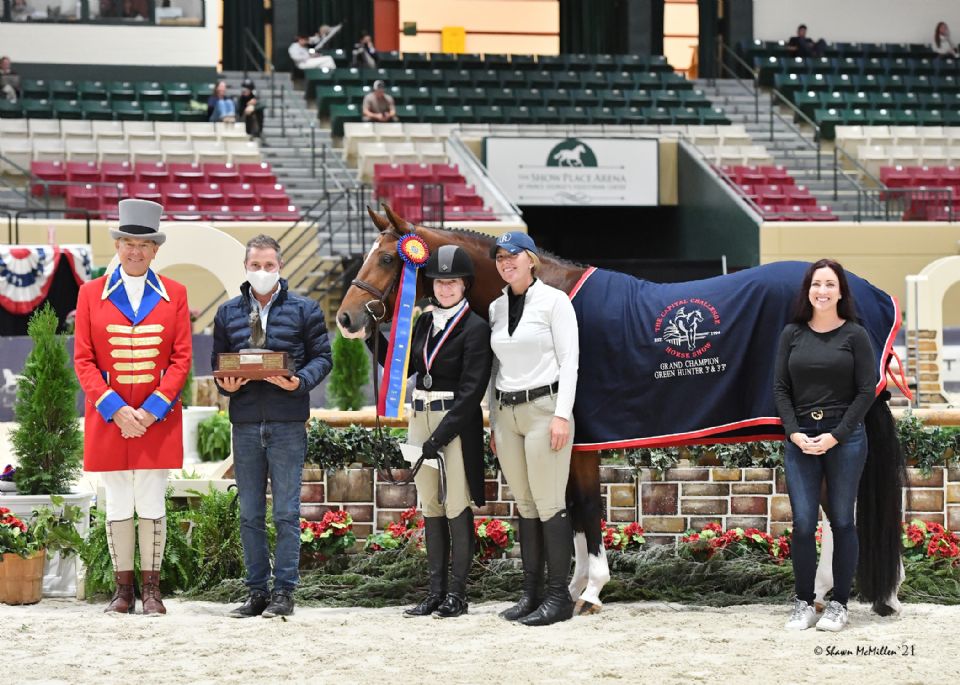 Riders qualified for the $25,000 WCHR Professional Challenge by finishing in the top four in professional hunter classes at the show or ranking in the top 10 nationally. The class consisted of a first round for all 28 competitors and a second round for the top 12 horse-and-rider combinations.

French piloted Babylon, owned by Marnell Sport Horses, to an impressive first round score of 95 to put the duo at the top of the leaderboard by five points. The pair held their lead in the second round with a score of 89.33 and a total score of 184.33.

French has been partnered with Babylon since the gelding arrived in the United States after being purchased by Olympic silver medalist Kent Farrington. The pair had a very successful start and earned the 2020 Winter Equestrian Festival Circuit Champion in the Pre-Green Hunter 3 & 4 Year Olds. Due to COVID-19, French only showed Babylon in the Green Hunter 3’ division twice before moving up to the Green Hunter 3’6” division.

“For him to come here at six years old and show against those horses and win tonight is pretty special,” said French of the Oldenburg gelding by Crumbie. “I never dreamed that he would win this. I just thought this would be a good class to go in for experience and see how he did, and he ended up winning the whole thing. Having started him from the beginning makes it more special.”

In the first round, said French, “It felt like one of those rounds, like when I rode Rumba the first round in [USHJA International Hunter Derby Finals], that everything seemed to go really well. He felt like he jumped well, and all three sets of judges thought the same thing.”

French and Babylon were no strangers to the winner’s circle on Wednesday at Capital Challenge. The pair earned a tricolor in the Green Hunter 3’6” Section A, as well as the EMO Best Professional Trip of the Show with a score of 92, and the Leading Hunter Rider. French has also been successful in the WCHR Professional Challenge in previous years, having won it in 2010, 2011, and 2013.

“I’ve always had good luck at this horse show; it’s always been a good show for me,” commented French. “I think this is the best show there is for the hunters with all the special classes and awards they give that showcase the owners, the horses, and the riders. Sometimes the owners and riders don’t get all the recognition. It’s nice coming here where we get a lot of recognition for all the hard work that we have done.”

Heather Williams isn’t a familiar face in the hunter show ring, day in and day out. But it’s her work put in behind the scenes that helps many of the top hunter, jumper, and equitation riders and horses win at the biggest shows in the nation. As a rider and trainer at Beacon Hill Show Stables with Stacia Madden, Williams is an integral part of the team, having worked there since she turned professional at the age of 18. Now 33, she still rides in her old hunt coat and had to purchase a shadbelly on Wednesday morning to compete in the Challenge class.

“A lot of times I’m not here during this week because it’s also the USEF Talent Search Finals,” said Williams. “The stars just sort of aligned that I was able to be here, and I had the opportunity from the Sorokens to ride this great horse so I said I was going to take advantage and do it while I can.

“The majority of my professional career is really spent training,” she continued. “I don’t do a lot of competitive riding for myself; I do a lot of schooling jumpers and preparing horses. I would say that’s primarily what my riding entails, but I knew I was going to be here this week and it’s a rare occasion.”

Williams sat in third place after the first round, but their highest second-round score propelled them up the standings.

“Coming into the second round, I took a peek at the scores before I got on and I saw that the top riders were all really within one point of each other,” she said. “I knew if I had a good trip, I would have a real chance at moving up. I tried to stick to my plan. I know my horse really well, and I had a road map of how I wanted to ride the course and luckily it panned out exactly how I’d hoped.”

It was a sweet victory for Williams, who was the first person to ride DiCaprio 3 when he arrived in the barn two years ago.

“We brought him home to the barn from Capital Challenge actually, and I took one lap around the indoor ring, and I said, ‘Stacia, this horse has to stay!’” she recalled. “It’s full circle that I rode him the very first day he came to the barn and loved him so much. Now it’s two years later and I feel like I helped him stay in the barn and he helped me win this class. To win a class like this is always special, but to do it on a horse I have such a relationship with makes it even more special.”

She added, “I’m very grateful to Stacia Madden for giving me the opportunity to do this class and Max Amaya for always being such a supporter of my riding and myself since I was a young professional. I’m good friends with Patricia Griffith, so she was nice enough to help me today. Lydia Ulrich and T.J. O’Mara were also here so between the three of them, I was really lucky to have a great crew help me.”

For her victory, Williams was presented with the Bittersweet Trophy, presented by Rachel B. Kennedy.

Ackergill Castle, piloted by Scott Stewart, returned to the ring for the second round of the KASK North American Green 3’-3’3” Hunter Championship sitting in the lead with a 90. The Holsteiner gelding (Balous Bellini), owned by Betsee Parker, didn’t reveal his inexperience as he loped around the Show Place Arena and posted a 90.16 from the panel of three judges. His combined two-round score of 180.16 secured the title and gave Stewart his eighth win in the 24-year history of the class.

“It’s always awesome to win here, and there were a lot of good horses and scores in this class,” said Stewart. “I tried not to watch anyone go the second time. I was really pleased with him. As of yesterday, I wasn’t even sure if I should do it and then he went in the first class so relaxed, I was sort of shocked how grown-up he acted, so I was glad I did it.”

Ackergill Castle, just six years old, was purchased during the height of the COVID pause. Stewart said of the talented gelding, “Betsee bought him off of a video a little over a year ago, and because of COVID we were not able to go over and try him. He had just done one horse show, and she wasn’t really looking for a horse but was nice enough to get him for us.”

Stewart only showed Parker’s young horse three or four times in Florida before showing once in July, and then competing in the USHJA Green Hunter Incentive Championship where he was second. The Incentive Championship was the last time he was in the show ring. Stewart was thankful he was home for the two weeks prior to Capital Challenge so he could ride the gelding himself every day.

“He’s really an amazing horse,” said Stewart. “He’s an amazing jumper and mover; he just sometimes will over jump. So, I jumped every other day over pony jumps just so he leveled off. He’s not that experienced, so I just wanted him to get relaxed.”

This year was Stewart’s return to Capital Challenge after staying home last year due to COVID. He said, “It’s great to be back here. I love it. It took me a little getting used to the first day since I haven’t been in an indoor in two years, but it’s always nice to be here.”

For his win, Stewart was presented with the Beverly Brooks Solter Memorial Trophy, donated by Hilary Scheer Gerhardt and Zan Martin Dillon.

R&R Hunter Horses LLC’s Waverly and Holly Orlando stood second going into the second round with an 88.91. They posted a 90 in the second round, not quite high enough to bump Stewart out of the lead. They remained in second place with a 178.91 total. Hunt Tosh and Twain, owned by Ceil Wheeler, were third with a total score of 177.83.

Orlando and Waverly won the Grand Champion Green Hunter 3’ & 3’3” award, sponsored by David Belford and Christopher Payne of New Hope LLC. For the award, Orlando was presented with the “A Rare Diamond” Perpetual Trophy donated by “The Friends of Mickey.” Sandy Ferrell and Veritas, owned by Stephanie Bulger, won the EMO Green Hunter 3’ & 3’3” Trip of the Show with a 91.5.

Competition will continue on Thursday at the 2021 Capital Challenge Horse Show with the Amateur-Owner Hunter and Adult Hunter divisions, as well as the NAL Children’s Jumper Finals and the NAL Adult Jumper Finals.