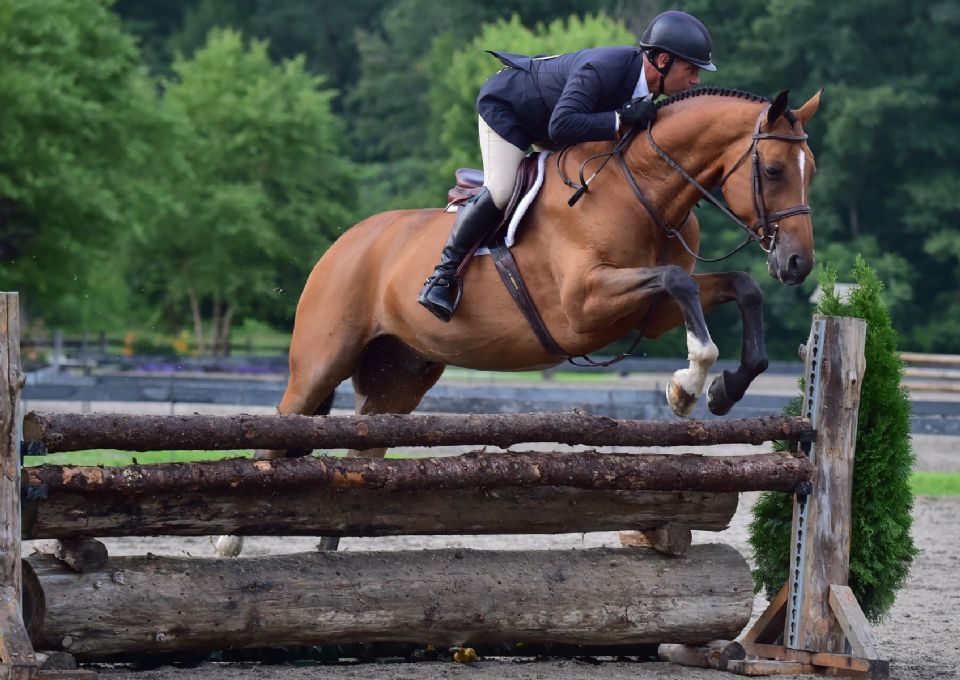 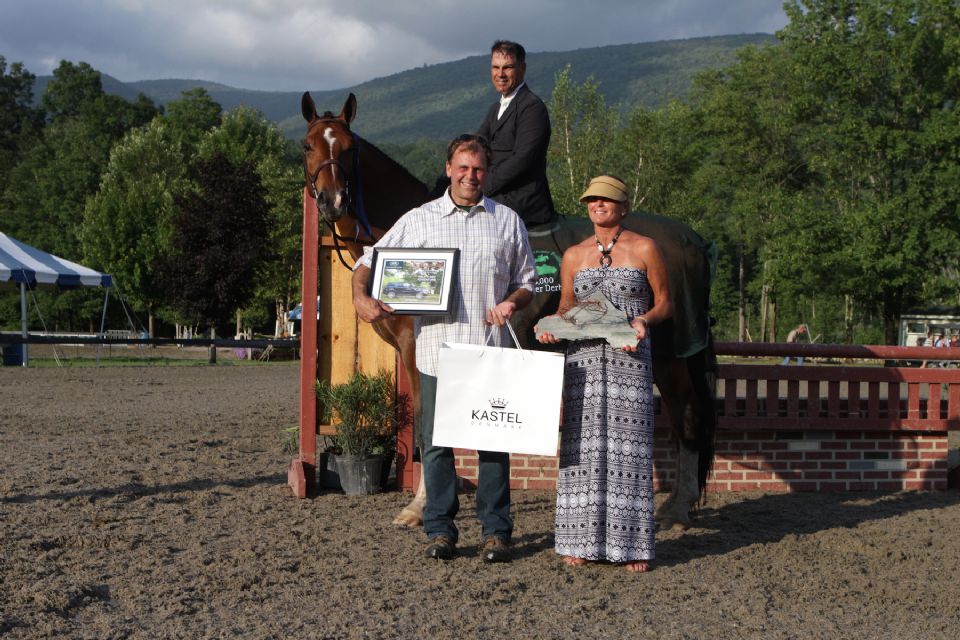 Jimmy Torano (aboard Argentus) and Lion Hearted are presented as the winners of the $5,000 NEHJA Performance Stake Hunter Derby, presented by Eastern Hay, by Chris Johnson of Eastern Hay and owner Daryl Portela at the Vermont Summer Festival.
Photo by David Mullinix Photography

Torano piloted Lion Hearted, a ten-year-old Warmblood gelding, owned by Beacon Woods, to score a 78 in the first round, but impressed in the second round with a 90. Despite returning early in the second round, their total 168 held on to top a field of 25 starters.

The track, set by Doug Russell of Ocala, FL, spanned two competition rings as it does each Thursday afternoon during the six-week Vermont Summer Festival. Following the first round, the top 12 entries returned in reverse order of standing for a handy course, which again utilized both rings.

Competition was tight on Thursday with only a single point separating the top four riders. Kim Buzby of Chester Springs, PA, took second on scores of 86 and 81 for a 167 total with Quinn, owned by Catharine Cox. Third belonged to Kelly Norton of Framingham, MA, and her own Kalifornia Dreamin' with an 84 and 82 for a final score of 166.

Heading into the second round, Torano led on nine-year-old Hanoverian gelding Argentus with the top first-round score of 87. But, a couple small mistakes over the handy track gave them a 78 and 165 total. They settled in fourth for owner Isalou, Inc. Natalie D'Elia of Middletown, CT, and her own Fanfare pocketed an 81 and 80 for a total 161 to round out the top five.

While Lion Hearted is a new ride for Torano of late, he has a storied history with the gelding after importing him as a three-year-old and selling him several years ago.

“I haven't even seen him since he was sold and the owner called me out of the blue and asked if I would take him on,” said Torano. “He's been really good, so just yesterday we decided to do him in derby.”

Torano and Lion Hearted took two blue ribbons last week in the Performance Working Hunter division, winning over fences and in the handy. His talent for nailing the handy tracks proved true again on Thursday when he returned with the second-to-lowest score, but pulled off the win.

“He was a little bit nervous in the first round, but all business in the handy,” said Torano. “I was at the bottom of the barrel and I pulled out all the stops to go for it. Opening up the two rings gives you a chance to gallop and I think that's where we won it – he was very handy.

“To be honest, I thought someone would bump me and I sent him back to the barn, but we held on,” laughed Torano.

For the win, Torano was presented with a scrim from Mona's Monograms and a half-day driving lesson with Land Rover Experience, courtesy of Eastern Hay's Chris Johnson.

With another feather in Lion Hearted's cap, Torano plans to point both him and Argentus toward the the upcoming $15,000 Performance Stake Hunter Derby, sponsored by Land Rover Experience. The high-stakes offering will take place during the final week of the Vermont Summer Festival on Thursday, August 6.

Competition at the 2015 Vermont Summer Festival runs weekly from Wednesday through Sunday, beginning each day at 8 a.m. Admission is $6 for adults and $3 for children from Wednesday through Friday. On Saturday and Sunday, admission is $9 for adults, $5 for children. 100% of the gate proceeds benefit the Manchester Community Library and Dorset Equine Rescue. Week 5 of the Vermont Summer Festival will feature the $30,000 Manchester & the Mountains Grand Prix on Saturday, August 1, at 1 p.m.